There are lots of empty seats on the N train, but Coach Lloyd doesn’t take one. Instead, he walks down the center of the car.

In a big, round voice that bounces around like a basketball looking to hook a hoop, he peddles the down-pat pitch that has been his subway-series mantra for nearly three decades:

“Good evening, ladies and gentlemen. I’m all about coaching basketball and keeping kids out of trouble. I’m not sponsored, and I thank God for people who help me out. I don’t care if you’re black, white or rainbow, if you don’t have change, have a smile. God bless you and have a good day.” 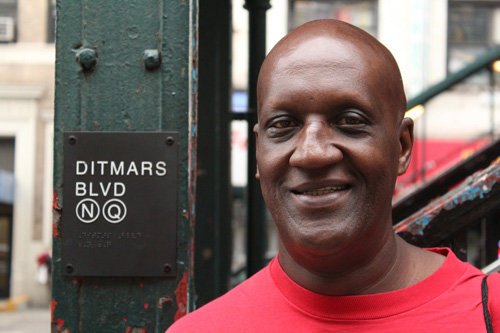 He smiles and people open their wallets and their hearts because they feel he’s the real deal. He really wants them to have a good day; his smile isn’t so much for the change he gets as for the change he makes in their lives.

“I really believe that God gave me those words — ‘change or smile,'” he says. “I have a gift to make people smile. One smile makes up for the 20 I don’t get. When I get one, I get two, three and four; getting smiles is an artwork just like coaching basketball.”

It would be disrespectful to call Coach Lloyd a panhandler. He has class: He doesn’t beg for money; he asks for help, politely.

Coach Lloyd wasn’t born a coach, but don’t tell him that. There was a time in his life when he probably did have a real first name, but only his mother knows for sure, and she’s mum on the subject. 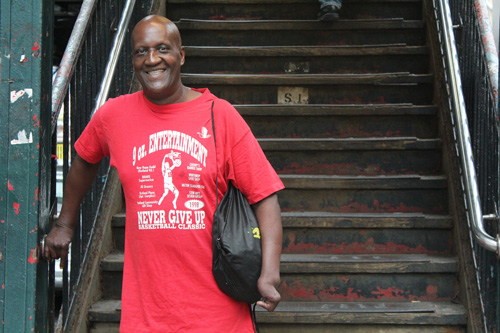 Photo by Nancy A. Ruhling
Coach Lloyd rides the N and F lines.

Among the people who work the subways, Coach Lloyd stands out, and it’s not only for his words. He’s a big, bold presence, and he’s missing five fingers; his hands look as though they were mangled in a meat grinder.

Those hands, the ones that he has used to dribble his way through life, are what started him on this journey that keeps him riding the F and N lines five, six and sometimes even seven days a week to earn pennies, nickels and dimes for the kids in Staten Island he coaches for free.

Coach Lloyd, one of five children, was born in Harlem, which is where his parents settled when they came from Barbados. They split before he spun off into his teens, and his mother raised him. He grew up in East Flatbush, Brooklyn, his accomplishments eclipsed by those of his siblings.

“My father was a very distinguished man,” Coach Lloyd says. “He wanted me to be a doctor or a lawyer.” 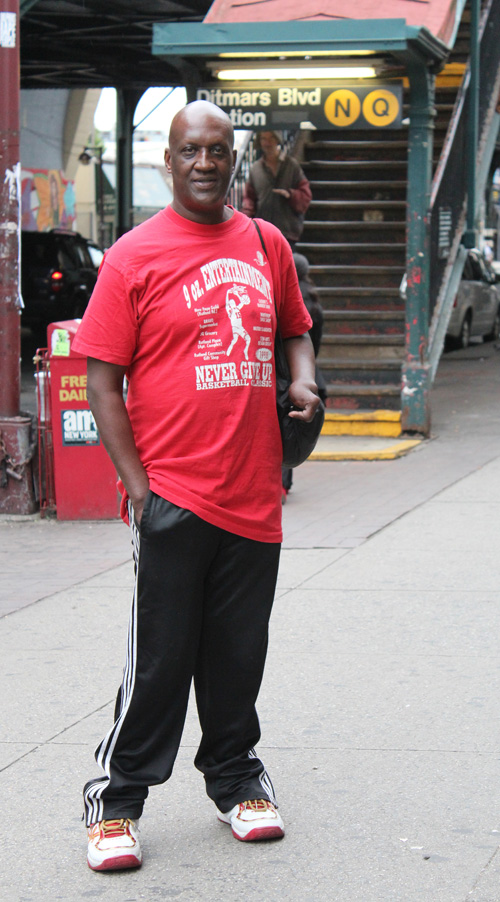 Photo by Nancy A. Ruhling
It hasn’t been an easy ride for Coach Lloyd.

Coach Lloyd wasn’t having either and dropped out of high school, where he played a lot of basketball and even more hooky.

“I grew up playing basketball, and it was always my dream to be a professional player,” he says. “My grades were never good enough to play on the high school team, but I did play with the players.”

He earned his GED and considered himself fortunate because he got picked for a semi-pro Continental Basketball Association team.

“I played one game, got injured, and I also had a daughter, so that was the end of that,” he says.

He worked a series of jobs — in a bank, in a kitchen and for a cable company. In his free time, he played basketball and coached kids’ teams, a practice that he has devoted himself to since 1980.

“The coaching is from my heart,” he says. “Nothing can take away my love of the word ‘coach.’ When the kids call me that, I can’t describe how it makes me feel.” 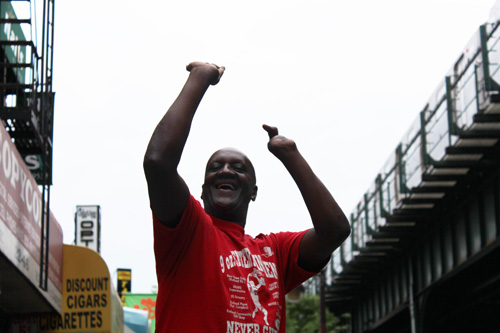 OK, so Coach Lloyd didn’t make the big leagues; it wasn’t a big deal because things were going well off the court. Then, in 1984, when he was on a job installing cable in Bed-Stuy, some kids intent on stealing his equipment threw a homemade bomb into his truck.

“The impact took five of my fingers off,” Coach Lloyd says. “I saw them get blown off. But I didn’t die. That’s when I knew that God wanted me to live for a reason.”

A year later, Coach Lloyd took to the subways on what is becoming a lifelong ride.

“What ignited everything was that one day an old man saw my hands and said that I could make money on the train,” Coach Lloyd says. “I knew then that God wanted me to use my injury as an inspiration.”

Coach Lloyd tried several lines and settled on the F and N because “people on them are generous.” 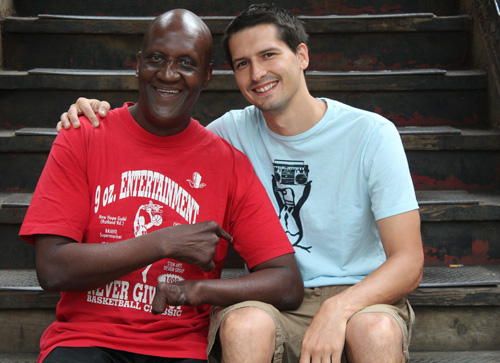 Photo by Nancy A. Ruhling
Patrick is working on a biography of Coach Lloyd.

By generous, he means that on a good day, he hobbles away with $25 to $50. He uses his own money to register his teams in tournaments and to buy trophies, water and pizza for the kids.

His teams play at the Cromwell Recreation Center and in his summer camp at P.S. 14 in Stapleton, Staten Island. They are in the Junior Knicks League, and they do the half-time show at Madison Square Garden. It all adds up: Coach Lloyd chips in at least $1,000 each season.

His day generally starts at 11 a.m. or noon and doesn’t end until after 6 p.m.; he lives in Staten Island so it’s quite a schlep because of the ferry.

First, he heads to the F train, where he works the stops from 34th Street to Queensbridge/ 21st Street. At 3 p.m., he takes a break. By 4, he boards the N, traveling back and forth between Lexington Avenue and Ditmars Boulevard. He carries a black backpack filled with basketball cards that he hands out to kids like candy.

Some commuters have been keeping up with him for decades. Patrick Donahue, a 29-year-old Astoria native, has been riding with Coach Lloyd since he was 13.

“He’s given me lots of small direction and wisdom in my life when I was down,” Patrick says. “He lights up the train.” 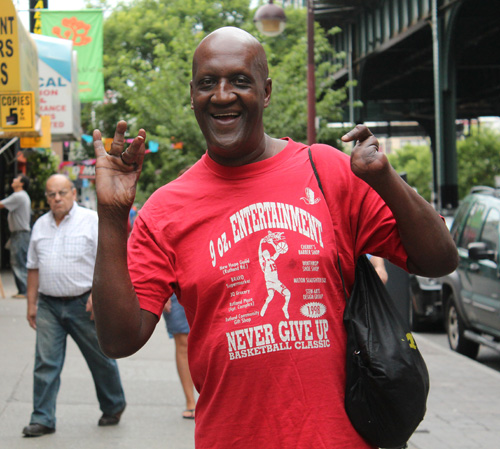 Photo by Nancy A. Ruhling
Coach Lloyd’s dream is to get a sponsor for his teams.

This year, Patrick, an aspiring writer, decided it was time to thank Coach Lloyd. He’s writing a short story about their friendship and is planning a biography tentatively titled If You Don’t Have Change, Have a Smile.

“I thank God for meeting Patrick,” Coach Lloyd says. “He’s the first person who has recognized me for what I am and what I do. He sees the good in me.”

Besides the basketball kids, Coach Lloyd has family. The father of one and grandfather of three says his “other half,” Roni, is all but a saint for putting up with him.

“We have our ups and downs, but we always seem to find a way to make things work out,” he says.

He was homeless for a while, but a friend is putting him up, charging “what I have to give for rent.” 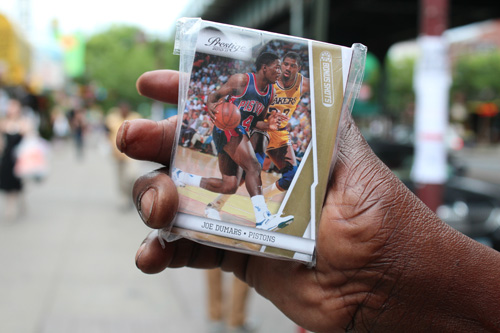 Photo by Nancy A. Ruhling
He hands out basketball cards and smiles on the subway.

His mother, God bless her, is 86, and he calls her every night.

Coach Lloyd isn’t a religious man in the conventional sense. He doesn’t go to church often. But he doesn’t need a Bible or a steepled building to make him feel blessed with his life.

Regardless of what happens, Coach Lloyd will continue to ride the trains. He may look 40, but he’s not. He won’t reveal his age, but he’s on the far side of his athletic career. He admits it’s getting harder to walk up the subway stairs. Decades on the courts have turned his knees into perpetual pain machines. 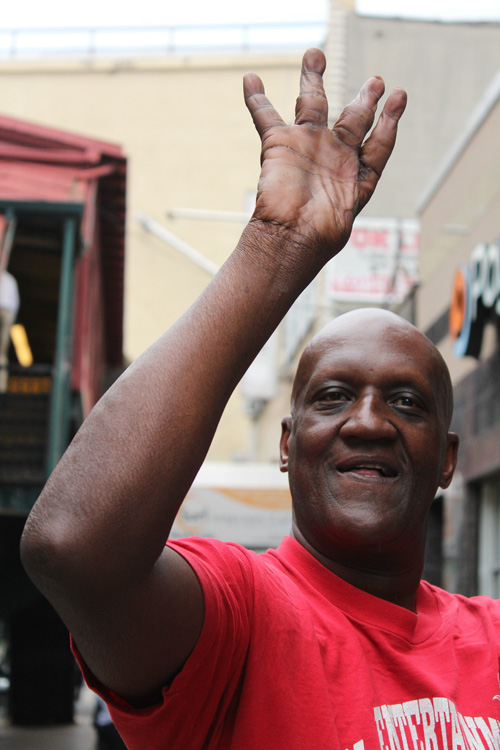 Photo by Nancy A. Ruhling
Coach Lloyd does it all for the kids.

“One day, something good’s gonna happen because I’ve sacrificed a lot,” he says.

Slowly, he heads to the N train. Darn if his knees aren’t acting up again.

Coach Lloyd turns around, smiling. If he’s hurting, he doesn’t let on.