It starts with a rape in outer space, but Starfighter really begins in this earthly living room, where we find Shakespeare on the bookshelf, Star Wars on the TV console and HamletMachine on the sofa.

In the heat of battle, Cain, the dark fighter, forces himself on Abel, his pretty-boy virginal navigator. Their actions are determined by none other than the mighty HamletMachine, aka Michelle Palumbo. 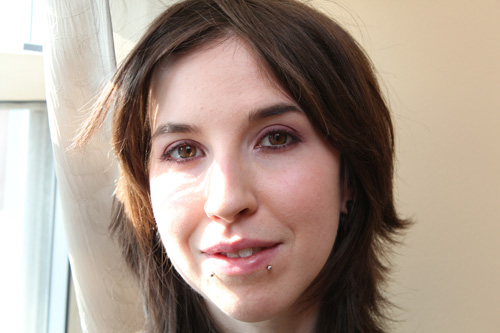 Photo by Nancy A. Ruhling
Michelle, aka HamletMachine, pens Starfighter.

“I tried it as an experiment,” she says, her whisper-soft voice as sweet as sugar. “It started as five pages.”

That was two chapters and 116 pages ago. This weekend, Michelle is bringing the starship sexploits of Cain and Abel to the Toronto Comic Arts Festival.

Every night, when she comes from work as a designer for a children’s animated TV show, she takes up her tablet and stylus in the office/closet she shares with her boyfriend. 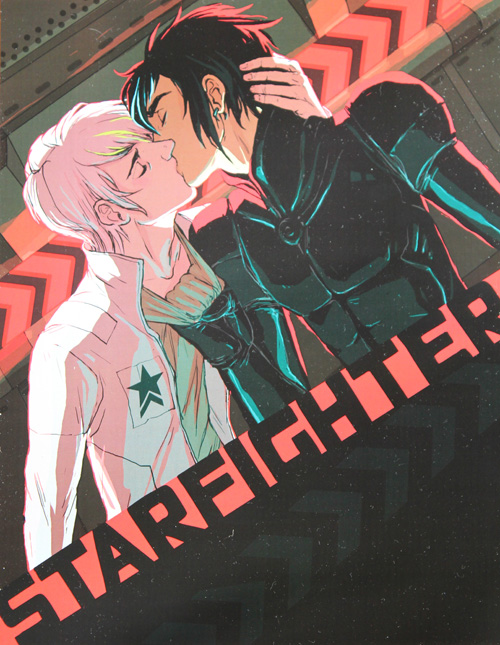 Photo by Nancy A. Ruhling
In Starfighter, the characters kiss and tell dirty stories.

She draws her inspiration from Yaoi, Japanese comics created by women for women that feature romantic and homoerotic men-on-men sexual encounters of the Cain and Abel ilk.

“I find my characters attractive,” says Michelle, adding that her readers are 18- to 30-year-old women, straight and lesbian. “It’s very easy for me to project emotions onto my characters. Yes, Cain and Abel are men, but I’m not opposed to female-female relationships.”

Her penis-porn plots come from a variety of sources. “I try as much as I can to insert my own emotional and physical preferences into the characters,” Michelle says. “And I try to include my own kinks.”

It can’t be that personal; Michelle is, after, all a woman, so she’s never experienced man-on-man sex.

“For me, gender isn’t as much a barrier as it is in society,” she says. “A male character can be intrinsically female and vise versa. My comic is a bit of a fantastical world.” 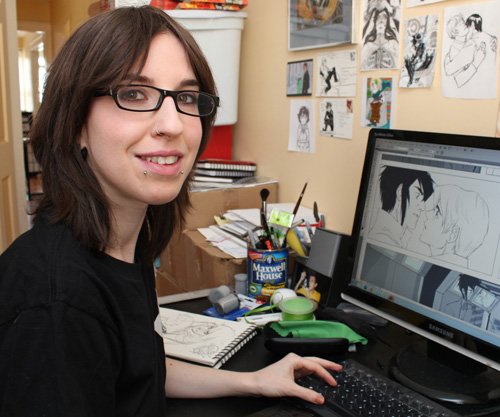 Photo by Nancy A. Ruhling
Michelle’s characters come to life on her computer screen.

Michelle traces her interest in animation to her childhood. She grew up in Kew Gardens and spent a lot of time drawing.

“I found it very soothing to imagine characters in fantastical scenes,” she says.

She loved animation, and, in her days of Snow White innocence, her tastes ran toward Disney.

“I saw animation breathe life into characters,” she says. “Movies like Beauty and the Beast could evoke emotion with the combination of story and music.” 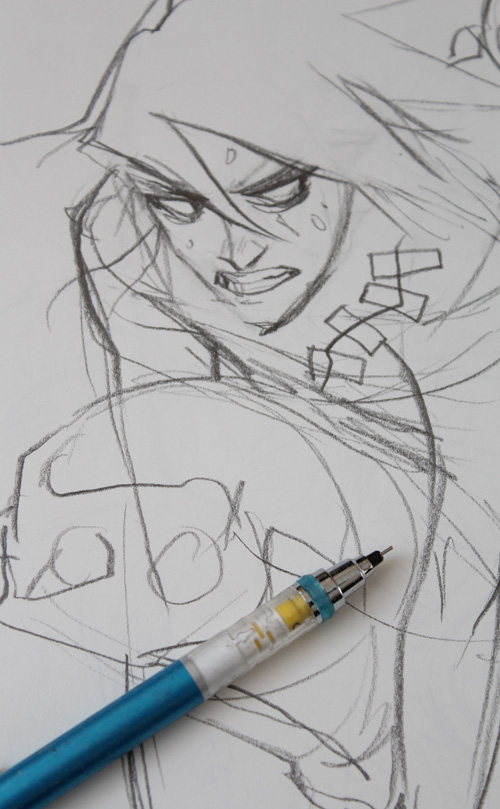 Photo by Nancy A. Ruhling
The Starfighter sexploits start with a sketch.

By the time she was in high school, she knew she wanted to be an artist. After earning a degree from Manhattan’s School of Visual Arts, Michelle looked for a job.

She started working in motion graphics then segued into children’s animated TV.

With Starfighter, she came up with the story line first. “It’s a simple premise,” she says. “There are two opposing personalities — Cain and Abel — who fight mysterious adversaries in space.” 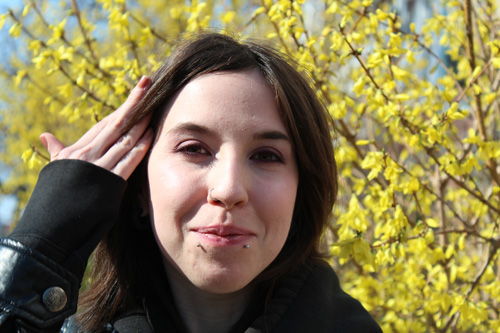 Photo by Nancy A. Ruhling
Michelle’s bringing Starfighter to the Toronto Comic Con.

After making pencil sketches — she does them during her subway rides to work — she draws the panels on a tablet that’s hooked up to her computer and uses Photoshop to color in the images. Each page takes about a week to complete.

HamletMachine, her moniker, is taken from the 1977 dramatic play by Heiner Mueller. “I’m a huge Shakespeare fan,” Michelle says. “Aside from Hamlet, my favorite play is Much Ado About Nothing. I chose the name HamletMachine because it is super cool and intense.”

Penning Starfighter has made Michelle realize that she wants to make comics a full-time career.

“I’m not sure how I’ll survive financially, but I can’t imagine at this point in my life not investing all my time in this,” she says. 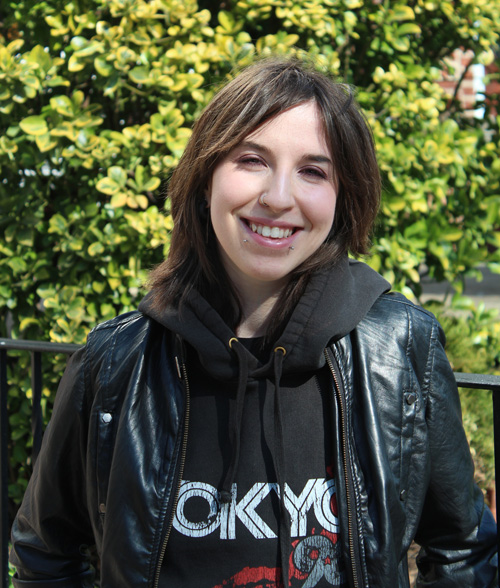 Photo by Nancy A. Ruhling
Michelle’s hoping to make the comics her full-time career.

Michelle isn’t saying what will happen to Cain and Abel. When we last saw them, Abel had volunteered them for a fatal mission.

It will, of course, be up to HamletMachine, after all’s well that ends well, to determine whether their fate is to be or not to be.