Elena Kess is wearing 6-inch lizard-skin stilettos the color of a moonless midnight. She’s so high off the ground that she’s tiptoeing rather than walking across 30th Avenue.

Even if you don’t notice the heels, you can’t miss Elena, who’s as bold as a chorus of exclamation points.

Skin-tight black jeans lead to a flowing green blouse. She has a voluminous scarf tied voluptuously around her neck, and her ears are decorated with giant golden circles that peek through her streaming honey-highlighted hair.

A couple of passers-by greet her as she sets up shop at a corner bistro table outside the restaurant Oveila. She puts Maximus, her flirty long-haired Chihuahua, on a short leash while she empties her purse, arranging her car keys, iPod, matches and Marlboros next to a slender glass of Greek ice coffee that’s twice her heel height. 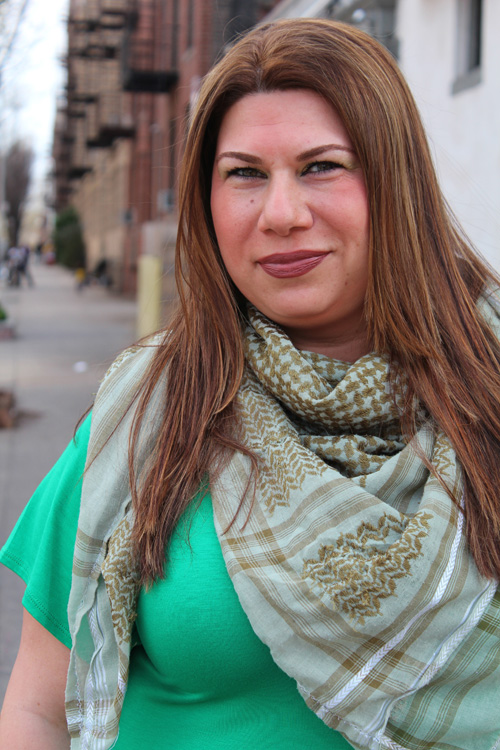 Photo by Nancy A. Ruhling
For Elena, charity begins each day.

Cell phone; where is her cell phone? Oh, she must have left it in the car. This is more than annoying; she can’t raise money for her favorite charity, Carnival of Love, without it.

OK, let’s face it. This is what happens when you’re Elena, the queen of all-nighters, and are stupid enough to start your day at 9 a.m. Elena didn’t get home until 2:30 a.m., which she considers an early night, and she usually doesn’t begin working until the crack of high noon. 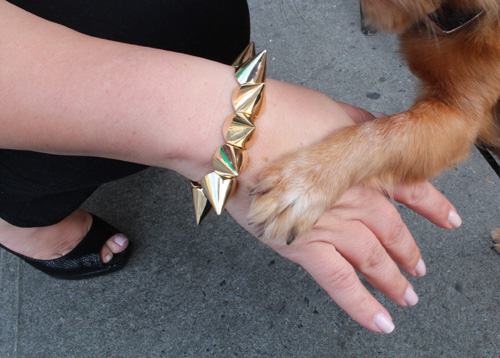 Photo by Nancy A. Ruhling
Hand and paw, Elena and Maximus work the crowds.

“People will have a heart attack if they see me here now,” she says.

But that’s not what happens; she’s such a fixture at the restaurants in the area that people stop to talk to her and to pet Maximus.

She can’t remember how long she’s been coming here, but she has tons of friends in the neighborhood, and she likes to patronize their places. Astoria is not her home, but it is where everyone knows her. She has a house on Long Island and spends a good deal of her time traveling. 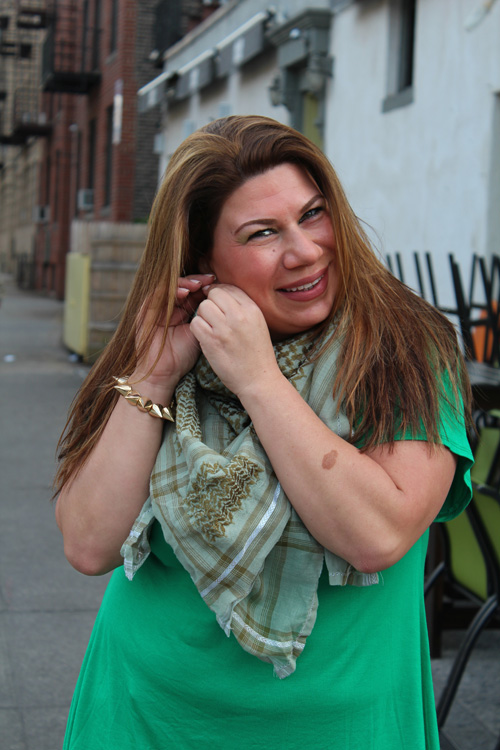 Photo by Nancy A. Ruhling
Elena primps for the photo.

The daughter of somewhat affluent Greek immigrants, Elena was born in Manhattan and raised on Long Island and Queens. Her parents divorced early in her life, and when she was 12, she was sent to Greece to live with her father for four years.

“I was devastated at first, but they were the best years of my life,” she says. “I had a lot of freedom.”

Her return to reality came her first day at Bayside High. “I had to go through a metal detector; I felt like I was in jail. And I didn’t fit in; I was used to a European lifestyle, and I had a European style — I was wearing skirts, low heels and bows in my hair.” 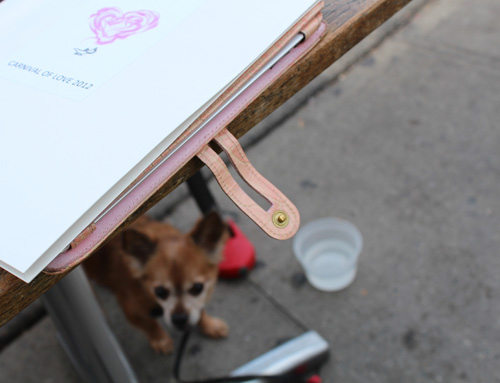 Photo by Nancy A. Ruhling
Elena’s pet project is the Carnival of Love.

She managed to make adjustments and to make friends, and all was going well until her senior year at Queens College. That’s when her father died. “This was life-changing,” she says, lighting a Marlboro. “He wasn’t sick. I got a call in the middle of the night saying he was gone.”

Speaking of death, Maximus has pulled his leash to the max and is heading toward traffic. “He’s a wanderer like me,” Elena says as she reels him in. 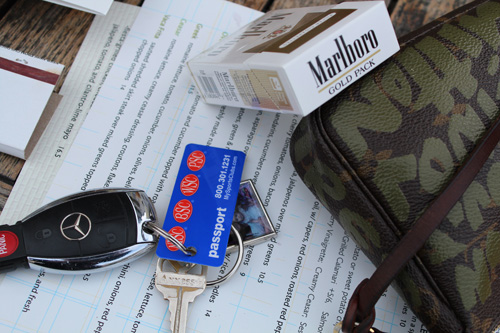 Elena’s father left her financially secure, and after she and her younger brother bought several properties in Astoria, Bayside and Long Island, she became a mortgage broker, eventually carving out a career with some of the top banks in Manhattan.

“I loved the work, and I loved dressing up,” she says. “When the mortgage rates were low and everyone was getting loans, I used to sleep in my office to get the paperwork done; I couldn’t even go to the bathroom.”

When she was shifted to an office job in the summer of 2011, she made what she calls a “snap, spontaneous decision.” She quit, packed her bags and headed to Greece. 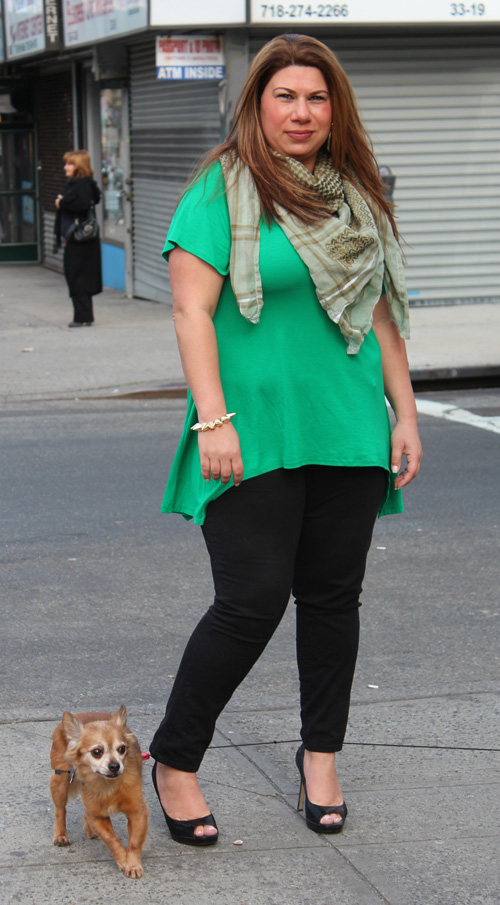 Photo by Nancy A. Ruhling
Elena and Maximus pound the pavement.

“I made Athens my base, and with one piece of luggage, I traveled all through Europe and Asia,” she says.

When she returned, she turned her talents to charity, becoming the sponsorship director of Carnival of Love, a nonprofit that supports the health and well-being of children. 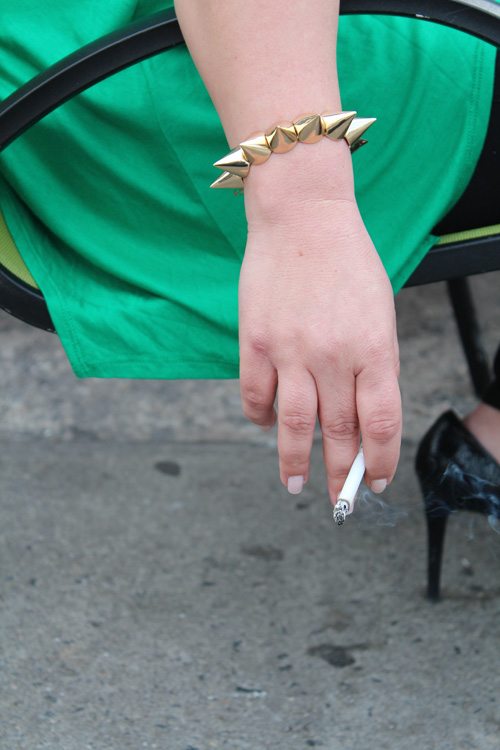 Photo by Nancy A. Ruhling
Elena’s Marlboro blows off some smoke.

Elena’s schedule today is packed — the fund-raiser is Friday — and she’s not likely to go to bed until 4 a.m. But the rest of her time isn’t so structured.

“I don’t know where I’ll be a month from now,” she says. “I wake up, and I never know what will happen. I’ve always been a free spirit. There’s always something to see or someone to see, and I always get sidetracked.” 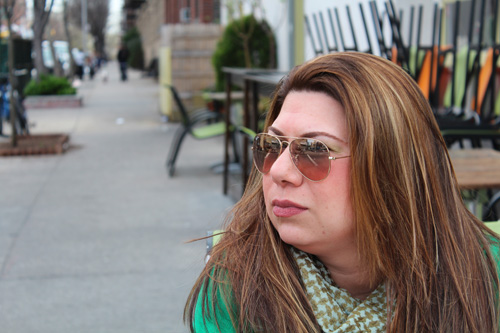 Photo by Nancy A. Ruhling
Elena’s shades work the day and night shifts.

The waitress comes up and tells Elena how beautiful she looks.

A little boy falls out of his stroller in the street, and Elena jumps up, a glass of water in hand. She helps his father help him up. She doesn’t go back to her post until the child is all smiles.