Chris Bogia opens the door and cranks up ’60s rock on the radio. He likes to listen to music when he works in his studio.

The art he does — gluing bits of yarn onto his paintings — requires a steady hand and a mindless head.

The space is small, but the walls stand tall. They are gallery white. The floors are gunmetal-grey cement, and the skeins of yarn are stored in clear plastic containers neatly stacked on top of each other in a loft-like partition that he reaches with a ladder.

A nail serves as a coat hook, and a wooden saw horse does duty as a chair for his plywood desk-table. On one wall, there’s a work in progress — a billboard-size charcoal drawing of Björk. 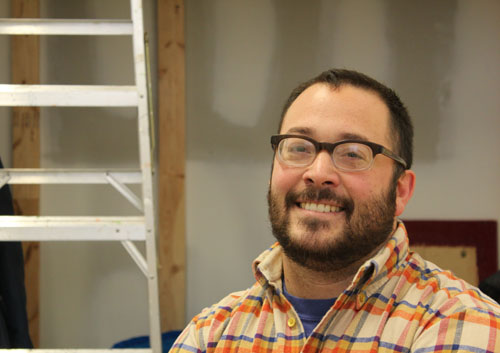 Photo by Nancy A. Ruhling
Chris hanging out in his studio.

This installation is propped with a rug, a string of broken Venus de Milo statues, a paper-lantern pendant lamp and a disco-dancing mirrored nightstand that holds a hand-blown glass vessel filled with crystal-clear lubricant and a shiny silver cock ring. 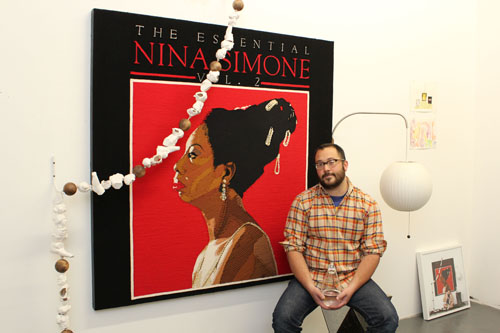 “It’s a place of worship that resonates with urban gay culture,” Chris says, adding that a photo of it, including him bussing his dog, was in the recent Queer Self-Portraits show at the Fred Gallery in London. “These are ubiquitous items I’ve seen in gay men’s apartments through the years.”

It looks like a movie set for an avant-garde 1970s film, but Chris assures it’s very here and now. “I have lube in my dresser drawer and a much smaller cock ring.” 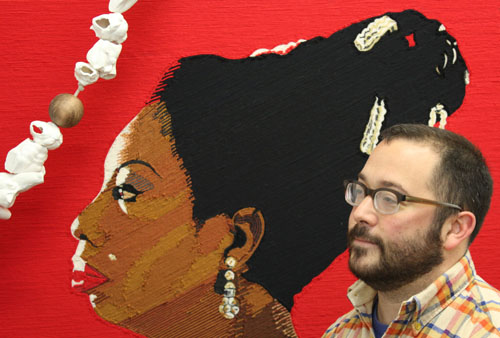 Photo by Nancy A. Ruhling
Artist and muse.

It’s not exactly performance art — God knows Chris did a lot of that when he was in college. There was that time at CBGB that he was half naked, covered in blood and crooning in a bird cage. “Happily, there aren’t many pictures of this,” he says.

Nina is one of Chris’ tamer pieces. His “out” art often is less subtle. There is, for example, the work showing two nude men (yes, one of them is Chris) urinating into the mouth of a third kneeling before them as if at a church altar. 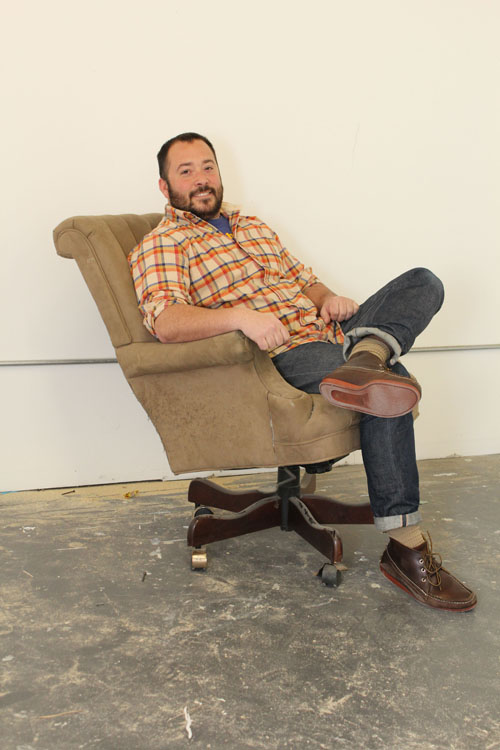 Photo by Nancy A. Ruhling
Hip artist in an uncool chair. Hint: It’s not his.

And there’s Chris in another piece, bare, in what could be politely called an upward-butt pose for an enema box, next to a ceramic dog turd. See the one of him in the altogether standing on his head, letting gravity have its way with every intimate part of him as a big, beefy guy steadies his legs.

“I like to think of my work as abstracts of bourgeois gay men’s apartments,” he says. “Some of them are focused on gay culture.”

Chris’ far-out art springs from his straight-and-narrow background. Chris, the baby of four, grew up in Wilmington, Del., where he doodled and drew his way through Catholic schools. 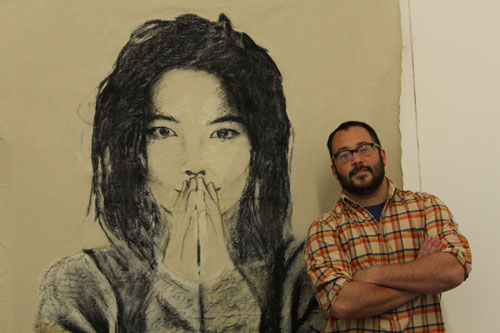 Photo by Nancy A. Ruhling
Chris’ next project focuses on an image of Björk.

“I was a sissy,” he says. “Nobody in my family was artistic. All my siblings were athletic, and I was forced to be a swimmer. I felt worthless. I was creative, but I got no accolades.”

Chris, a bear cub with biceps and big, black glasses, looks crushed when he says this.

Ever watch Glee? Well that’s kind of what Chris’ life was like in high school. “I studied opera,” he says, wincing at the uncoolness of it. “In terms of sexual orientation, I was oblivious — I dated girls — and thought it was normal that I didn’t like kissing them.” 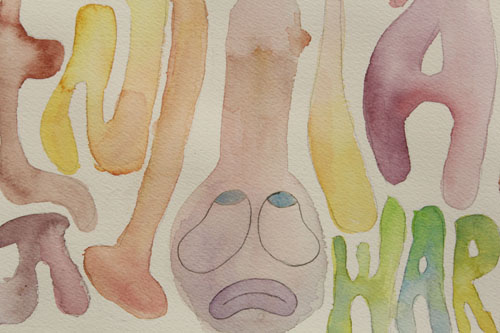 Photo by Nancy A. Ruhling
One of Chris’ watercolors.

Then in the summer of his 17th year, he watched Armistead Maupin’s Tales of the City; there was a scene with two men in bed.

“Something just clicked,” he says. ” I got so scared I contemplated hurting myself.”

He came out to one person, then a second, and then he couldn’t stop himself. “I told everyone but my parents,” he says. “It was so liberating.”

There were two things he knew: He had to get the hell out of Delaware, and he had to find a boyfriend fast.

He chose to go to New York University because, he says, “it’s an extremely gay school.” 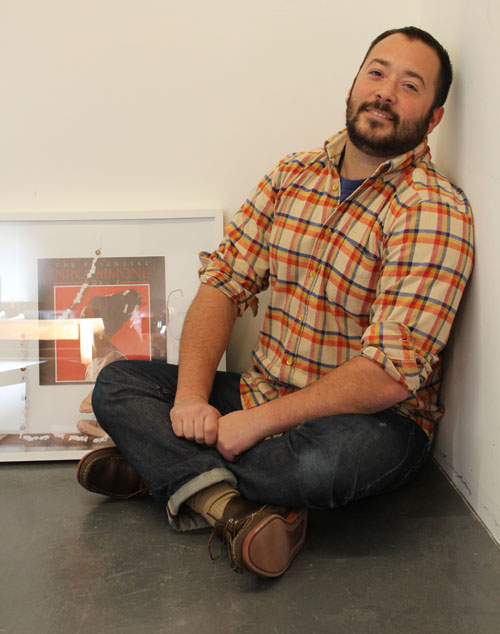 Photo by Nancy A. Ruhling
Chris has a day job at New York University.

“My career path was straight,” he says. “From the time I was in first grade, I knew I was going to be an artist.”

For the last six years, he’s been an academic administrator for art programs at New York University, where he sometimes also teaches art. Recently, he established the nonprofit Fire Island Artist Residency, a program for lesbian, gay, bisexual and transgender artists.

Chris, who is 34, produces his art when he has free time. He’s usually in his studio two to three evenings a week and at least one weekend day. 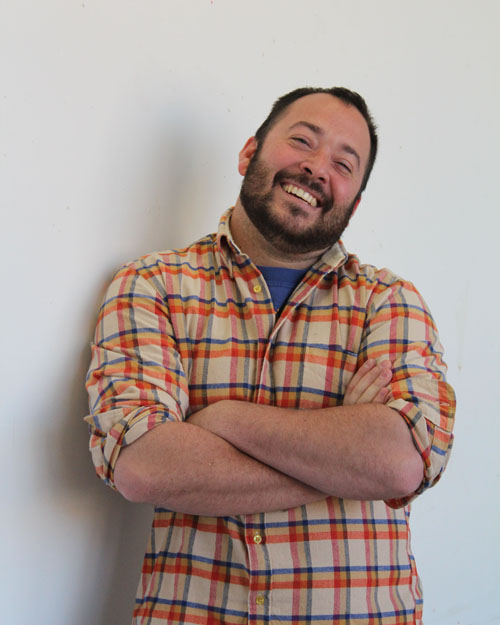 Photo by Nancy A. Ruhling
Someday, he hopes you’ll know his name and his art.

He starts with a sketch of an image or decorative object that he feels a strong connection to. Then he makes a painting that he marks up like a paint-by-number so he can apply the various shades of yarn.

“Yarn is my box of paints,” he says. “Painting is so much easier, but it’s not enough for me. It doesn’t feel personal enough. These pieces are more singularly mine.”

Chris dreams of getting his works in major galleries and making more time to create more out-of-the box art.