For Camille Pisciotta, this is just like any other day, except that it isn’t. By the time she’s unlocked the gate at her Pampered Poodle Palace, her big blue eyes are tearing up.

“I was never a wimp my entire life,” she says in apology. “You couldn’t get me to cry unless it was at my mother’s wake, but this has torn me up.”

“This” refers to the fact that after 47 years, the Pampered Poodle Palace, which Camille raised from a puppy, is being forced to close. There’s a new landlord and a new, higher rent that Camille can’t afford to pay. 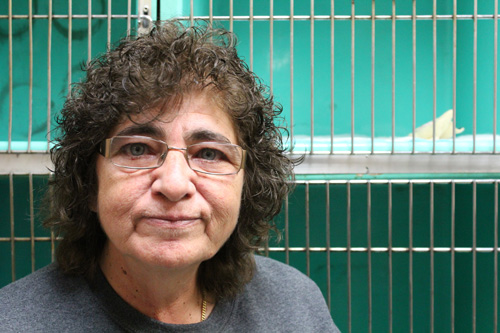 Photo by Nancy A. Ruhling
Camille’s shop has been in the same spot for nearly half a century.

Camille, a bulldog with a crown of curly red-brown hair, isn’ t the only one crying. Her longtime customers, who travel to her from all the city’s boroughs, are grief-stricken.

“There will be an influx of Prozac in the neighborhood when I leave,” Camille says. 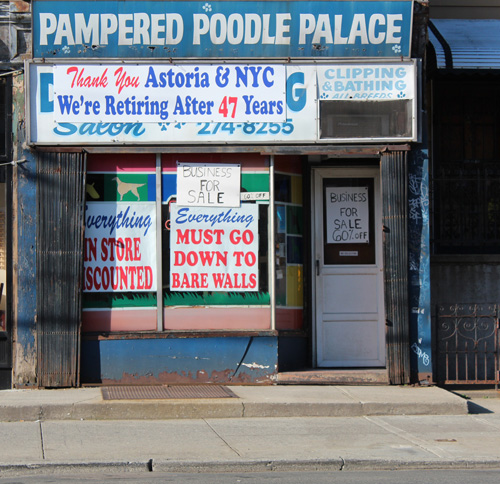 Photo by Nancy A. Ruhling
The signs at the Pampered Poodle Palace say it all.

Sure, Camille is getting older — she’ll be 65 in October — and she knew someday she would have to slow down, but she figured she and her scissors and Oster grooming machines still had a few good years left before being sent to the pound.

“I’ve loved and adored what I do,” she says. “I love the animals, and I love to make them look pretty.”

Camille, who grew up in Bed-Stuy, Brooklyn, comes from a family of animal lovers. Her earliest photo, taken when she was 7 months old, shows her mother holding her and a cat and dog. 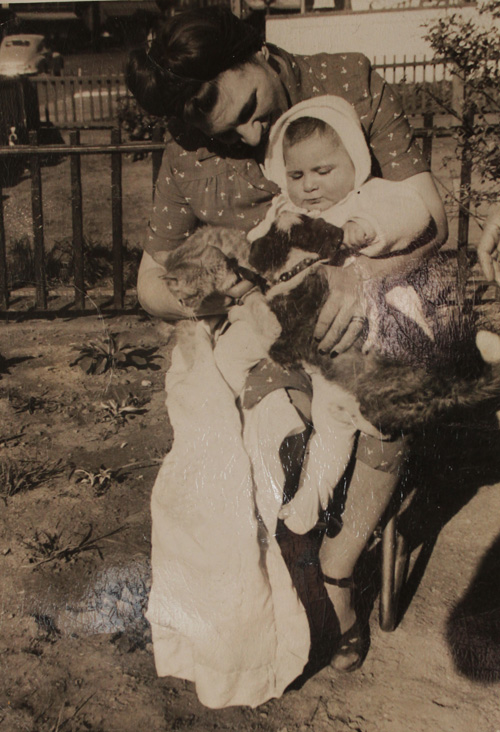 Photo by Nancy A. Ruhling
Camille, 7 months old, in the arms of her mother, her cat and her dog.

She started working in the grooming business when she was 17 and opened her palace when she turned 21.

“I went to computer school, but it was boring so I went right to the dogs.” she says. “I practiced on my mom’s four poodles.”

She’s never counted the number of dogs she’s groomed, but she reckons she does about 2,000 per year, so you can do the math. 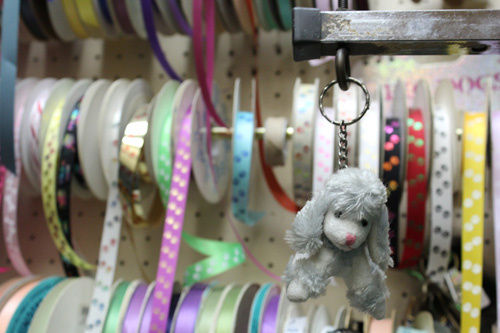 Photo by Nancy A. Ruhling
One of the shop’s signature poodles dangles at dog-eye height over a grooming table.

“Honey, that’s a lot of dirty asses,” she says.

By the way, Camille doesn’t call herself a groomer; she prefers to refer to herself as a pet stylist.

“What I do is artistic, it’s like drawing with scissors and machine,” she says. “Most groomers out on the street are like strippers without music. I play the music — I’ve got the beat.” 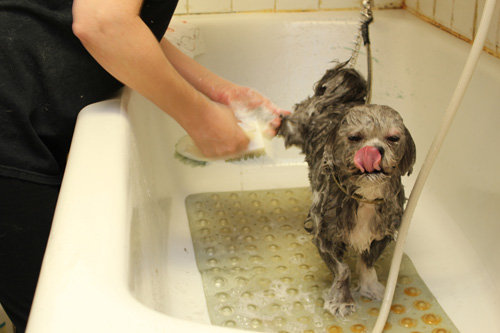 Photo by Nancy A. Ruhling
Ollie gets a bath.

Ollie, a grey Shih Tzu with perky eyes, is Camille’s first canine client of the day. Regretfully, she reminds herself, he’ll be one of her last.

Ollie has been here many times before, so he’s used to the routine. His parents have brought him all the way from Roosevelt Island for the works — haircut, bath, nail trim and ear cleaning. 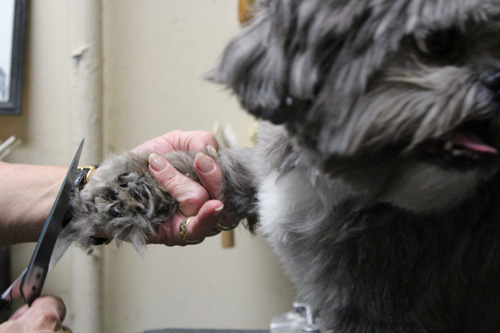 Photo by Nancy A. Ruhling
Camille and Ollie work paw in hand.

“You’re such a happy baby, Ollie,” Camille croons as she begins the three-step process that will make him even cuter than when he entered her establishment. “Let’s see your eyes; I like to look into the windows of the soul.”

Under Camille’s scissors, Ollie’s as calm as Buddha as his fur starts falling like snow onto the floor mat of printed paws. 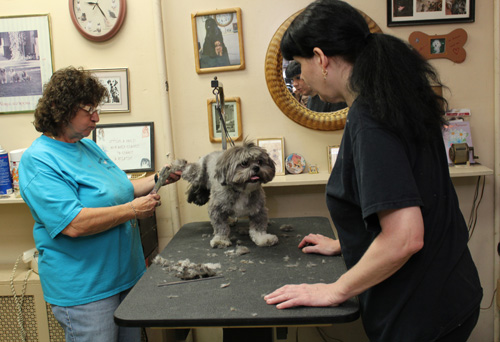 Photo by Nancy A. Ruhling
Camille and bather Jill Miller with Ollie.

Camille, who has two employees, has booked 16 clients today, and she’s looking forward to working her magic on each one. As she’s talking, a 5-year-old black and white French bulldog named Morrissey drags his owner in to say hello. He visits Camille every day.

“His mother better hide the Gillettes,” Camille says. “He’s going to slash his wrists if he can’t see me.” 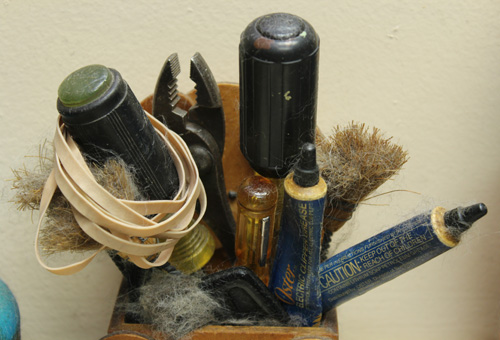 Photo by Nancy A. Ruhling
In the future, Camille’s stylist tool kit will accumulate dust not fur.

Camille doesn’t want to leave canine clients like Morrissey high and dry. It’s possible she’ll be able to sell the business to someone who is willing to give the raised rent a try. But she’s pretty peticular: The new owner will have to be a pet stylist who adheres to her high standards, and, folks, it’s not looking promising.

Camille’s worried about her clients, but what about her? She’s not the type of person who likes to have a lot of free time. 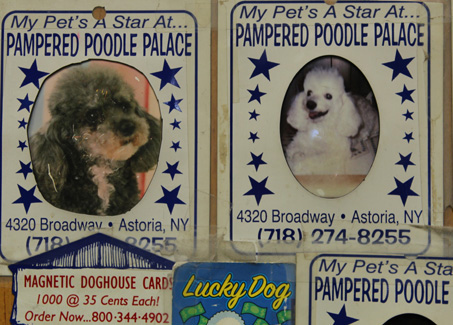 Photo by Nancy A. Ruhling
Some of the stars in Camille’s hall of fame.

“I only take a week of vacation a year,” she says. “And I twitch by the third day. I’m closed Sundays and Mondays, and I can’t wait to get back to the store. Sundays, I lie in state like the pope, and Mondays, I do all the errands I can’t do during the week.”

Back home in Oceanside, she does have family: She’s mother to a toy poodle named Ella and a Schnauzer who answers to Sasha. She keeps their photos prominently displayed in the Pampered Poodle Palace.

“I prefer pets to people,” she says. “They wag tails instead of tongues.” 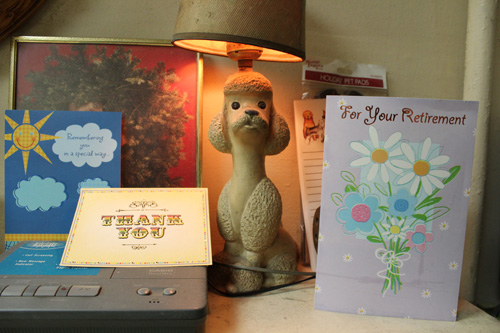 Photo by Nancy A. Ruhling
Cards from clients remind Camille that her days are numbered.

And there’s a part-time job waiting for her. Three days a week, she’ll be teaching pet styling at a private school in Mineola.

“This will keep my hands busy,” she says. “And this will help me put better groomers on the street.”

While she’s working on Ollie, Camille points out all the decorations in the grooming station. She didn’t buy any of them. The statues, dolls and cards are from her loyal customers. Each reminds Camille of a pet at a particular point in time, and the stories remind her that she doesn’t have any new chapters at the Pampered Poodle Palace to look forward to. 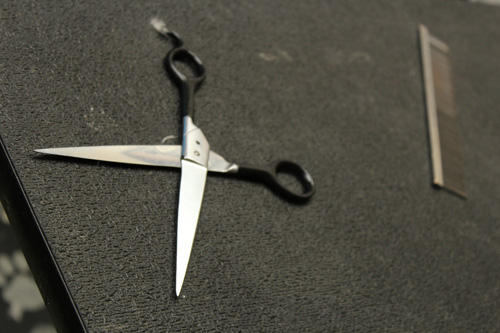 Photo by Nancy A. Ruhling
Camille’s scissors soon will be idle.

“This is a drastic change for me, and I don’t like change,” she says, picking up a white plaster poodle that’s been there ever since she opened. “I know it’s time, but it’s difficult.”

It’s even more difficult to hold back her tears, but somehow she manages.

Camille gives Ollie a final brush out and ties a festive ribbon around his neck.

Ollie is all ready to go, but Camille never will be.