Jack Chiello is a low-key guy. He’s also a man of few words. Getting him to talk about himself is like trying to pry a pearl from an oyster with a plastic toothpick. 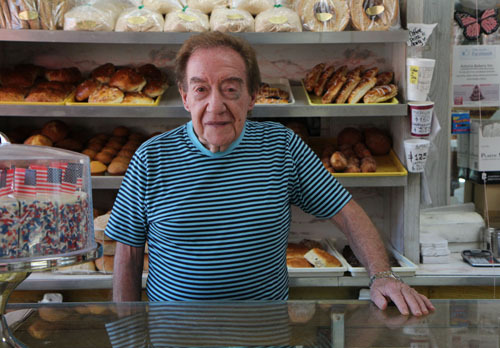 Photo by Nancy A. Ruhling
Jack’s the owner of Astoria Bakery.

Now, singing, that’s another matter. He could croon until the moon turns blue. But this is not something he volunteers. He’ll only open up if you ask him about his CD. The one that he’s selling at Astoria Bakery, his mom-and-pop pastry shop.

The tiny two-counter store is as unassuming as its owner. The name — Astoria Bakery — is plain vanilla; a more pretentious man would have called it Jack’s.

Photo by Nancy A. Ruhling
Astoria Bakery has been on this corner for 55 years.

It’s been on the corner of Ditmars Boulevard and 45th Street for more than a half century, but you’d never know it. There’s no marquee sign; the front plate-glass window merely whispers BAKERY in steady pale-pink neon. 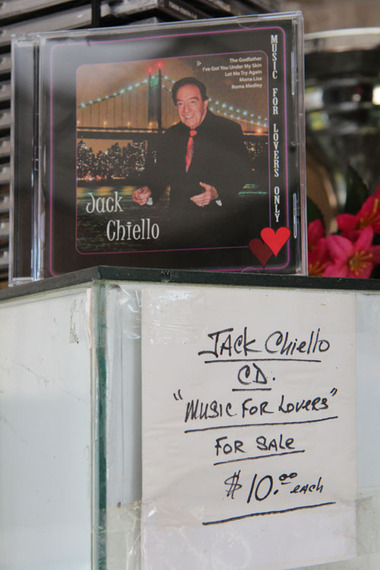 Photo by Nancy A. Ruhling
Cookies, cakes and Jack’s CD.

The 1950s wood-paneled wall over the tall, refrigerated counter features a picture of the Madonna (the saint, not the singer), a black-and-white cheesecake shot of Marilyn Monroe in bed, the cover of Jack’s CD and an image of San Pio da Pietrelcina. Jack chose the art.

When Jack and his father-in-law bought the bakery, it wasn’t nearly as grand as it is now. Jack still marvels at the improvements. 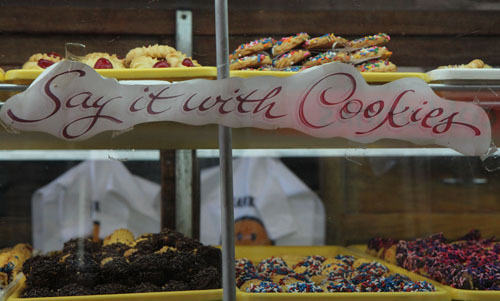 Photo by Nancy A. Ruhling
A sweets sign in the shop.

At that time, it had been in business only five years, and the two figured they could make a go of it if they worked really hard.

Before we go any further, it should be noted that Jack, a classic looker with frisky auburn hair and a voice that’s hung with honey, is not a baker.

He started out doing deliveries and never got his hands into the cookie jar. He left that to his father-in-law. He makes no apologies for this fact, but he doesn’t advertise it either. People simply assume. 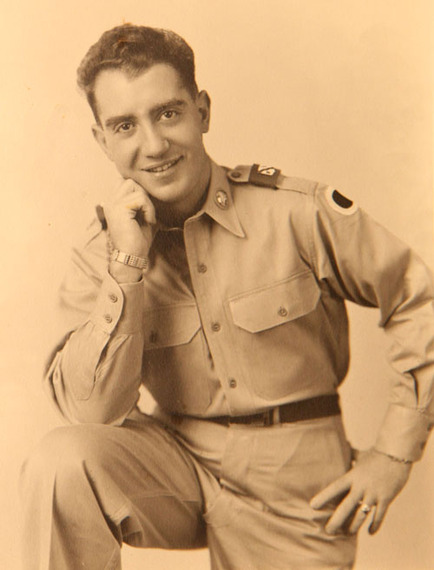 Photo by Nancy A. Ruhling
Jack, dashing in his uniform.

Anyway, Jack’s parents were on vacation in Palermo, Sicily when he came into the world.

“My mother was Italian, and my dad was American but grew up in Italy,” he says. “They were visiting family.”

When Jack was not yet a year old, they moved to New York, and Jack was raised in Manhattan, where he found his voice in the high school glee club and the church choir. 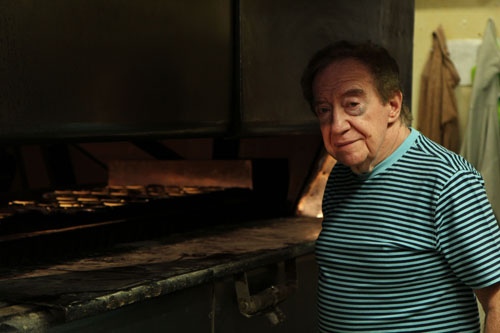 Photo by Nancy A. Ruhling
Jack at the oven.

By the time he was 17, he and his baritone were playing the big clubs in the city, singing love songs and ballads in English and Italian.

“I modeled myself on Frank Sinatra,” he says. “I wanted to make singing my career.”

During the Korean War, Jack found himself behind the mic, entertaining the troops in Europe. 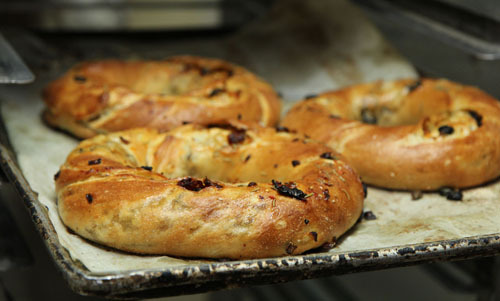 When he was discharged after a two-year stint, in 1955, he headed to the Catskills, where he became a social director and entertainer in a hotel.

A visit to Palermo changed the course of his life. That’s where he met, Anna, the second cousin he serenaded with love songs until she agreed to be his wife.

“I proposed when I was back in New York,” he says. “I suggested marriage in a letter.” 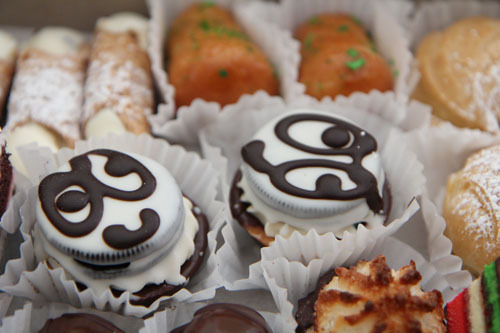 Photo by Nancy A. Ruhling
Jack’s son-in-law bakes the pastries.

For a couple of years, he worked as a waiter. Then he and his father-in-law bought Astoria Bakery.

Before their three girls were born, Anna helped out, but Astoria Bakery basically has been Jack’s show for most of its record run. 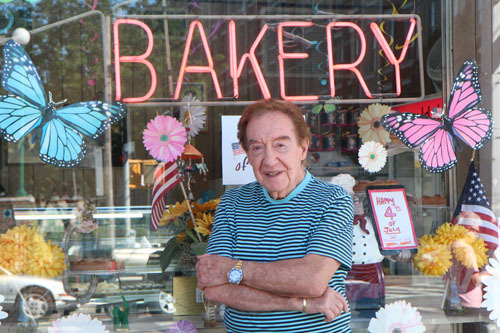 Photo by Nancy A. Ruhling
Jack has no plans to retire — as a bakery owner or as a singer.

Jack may have made his living singing the praises of cakes and cookies, but he never gave up on his voice. When he wasn’t running the shop, he and his band were performing.

“We played with Count Basie and Duke Ellington,” he says. “And I’ve met Tony Bennett and Bobby Darin.” 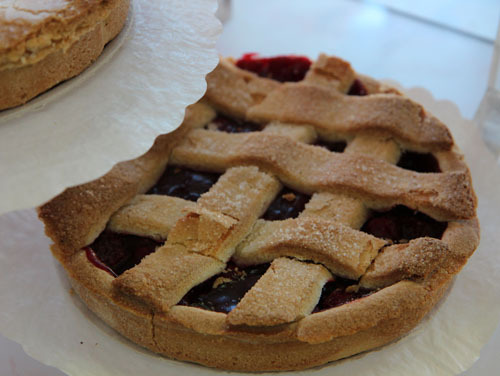 Photo by Nancy A. Ruhling
Homemade pies are also on the menu.

On Music for Lovers Only, Jack sings I’ve Got You Under My Skin, Mona Lisa and his signature Volare.

He’s too modest to admit it, but he and his red-velvet voice give the Chairman of the Board a run for his money.

Jack isn’t shy about his talent, but he doesn’t push his disc. It’s at the counter far above eye level, and a hand-written note card says it’s available for $10. Sometimes, he plays it as background music on the holidays. 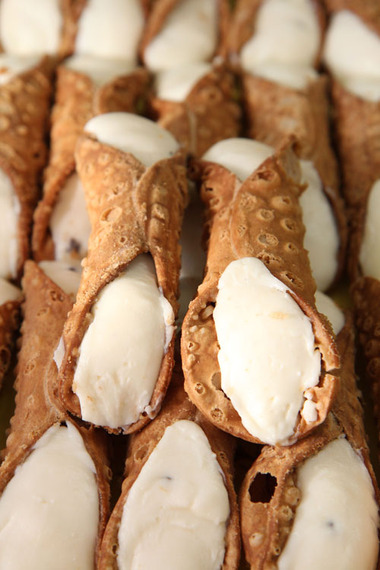 Photo by Nancy A. Ruhling
Jack’s a cannoli guy.

“I wish I had pursued my singing career,” he says. “But I never could leave this place. It’s my livelihood.”

His eyes look more than a little sad. He shrugs.

At 83, Jack remains committed to Astoria Bakery. Seven days a week, 9 a.m. to 8 p.m., you’ll see him there. He admits that sometimes he skips out early on the weekends for a singing gig. 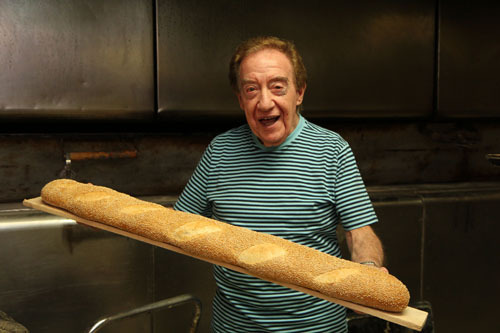 Photo by Nancy A. Ruhling
Something to sing about.

His son-in-law starts the baking at 4 a.m., and two of his daughters help out at the counter.

Jack likes shooting the breeze with the customers, most of whom know him by name if not by voice. Some have been coming since he opened a lifetime ago.

“People, especially my wife, keep asking me when I’m going to retire,” he says. “But I can’t. Just like singing, it’s part of my life.”