Sometimes good things happen on bad days; in this case, it was one of those things that almost didn’t happen, but when it did, it made everything better.

It was a year after the new century trumpeted its grand entrance when Guillermo Lucerofabbi and Canalp Caner were riding on the subway from Astoria toward Manhattan.

They were strangers on the train. And to America.

Guillermo, who is known as Willie, was a new arrival from Argentina, and Canalp, who goes by John, had just come from Turkey. 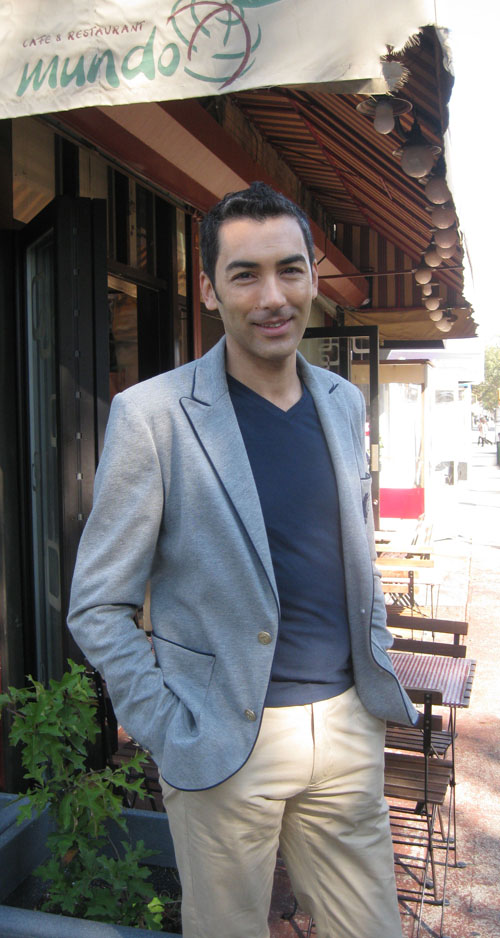 Photo by Nancy A. Ruhling
Willie, the host at Mundo.

There was construction on the line, and the riders were left to figure out the details of the detour, which involved a bus or buses. The exact rerouting doesn’t matter. What’s important is that Willie gave directions to John, and they became good friends.

They were fresh out of school, and each had come to New York with nothing particular in mind save adventure.

John, whose chiseled face is defined by dark ribbons of cherub’s curls, had been teaching English as a second language to Turkish immigrants and then started working as a medical and legal translator. At first, Willie, vivacious and exotically handsome, was a clothing salesman; later, he became a personal assistant to a hair salon colorist. 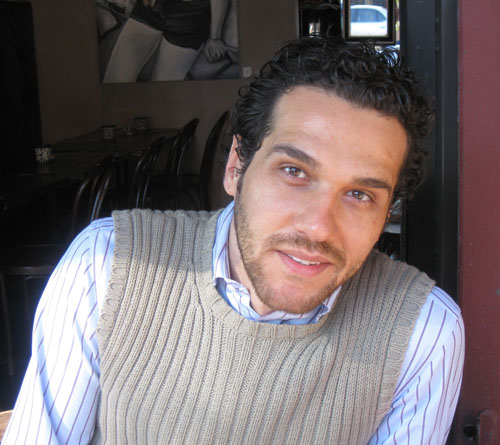 Photo by Nancy A. Ruhling
John is Mundo’s executive chef.

And for that mangled subway ride, that’s the way things might have stayed.

But when they found each other, they got the idea that it would be fun to open a café. They missed the foods from their homelands and together with some friends began cooking up a storm, creating dishes from family recipes. 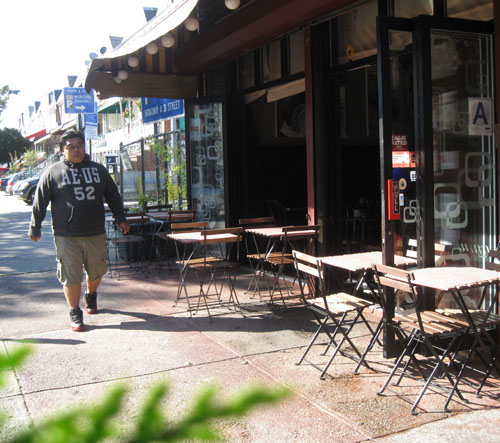 Photo by Nancy A. Ruhling
Mundo bills its fare as “a journey at the table.”

“But we loved eating and appreciated good flavors,” adds John. “And we had the passion and common sense.”

In 2005, with Pinar Senveli, they opened Mundo, which means “world” in Spanish and Portuguese.

“The idea was to have all the dishes of the world under one roof,” says John. “We’d mix and match them and put them in one place.” 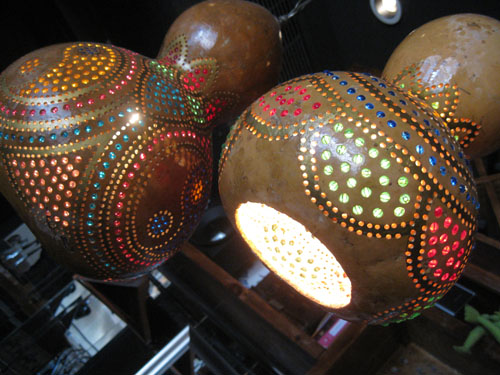 Photo by Nancy A. Ruhling
Lamps made from gourds illuminate the cafe with a rainbow of color.

Mundo, a jewel box of foreign flavors and cosmopolitan cultures, fuses fare from Turkey, Argentina, Brazil, the Middle East and the Mediterranean, a mix that stirs Astoria’s melting pot with panache.

To say that Mundo means all the world to Willie and John is a flip oversimplification. But the skillet-size café/restaurant, which opens onto the sidewalk via folding glass doors, is where they spend their 15-hour days and where they eat breakfast, lunch and dinner.

John’s the executive chef. Willie’s the face outside the kitchen; he loves greeting the guests, a good many of them regulars from Manhattan. It is he who does most of the talking. 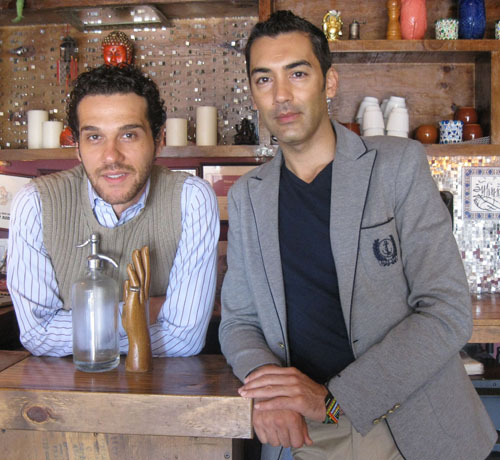 Photo by Nancy A. Ruhling
John and Willie put health at the top of the menu.

Mundo wears the world not only on its menu, but also on its décor, which John and Willie designed. Square wooden tables, aged to look antique, and vintage-style bentwood chairs bring in a bit of Europe.

The walls are filled with works from local artists; every month, there are new ones on the menu. A sublime chili-red Buddha, who watches over the bar, grounds the tranquil space, and rhinestone-studded gourd pendant lamps from Turkey shed light on the cash register.

“We like to focus on the healing aspect of food,” John says. 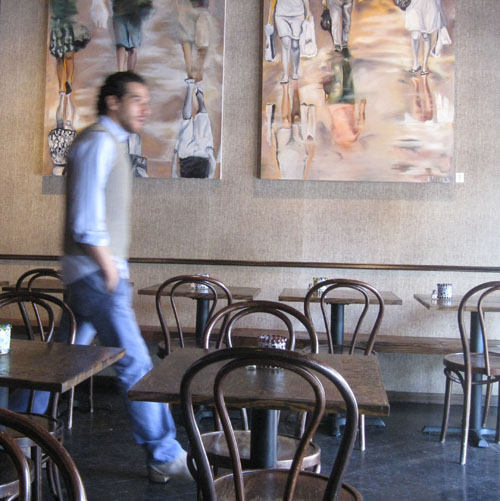 Photo by Nancy A. Ruhling
At Mundo, the arts, culinary and otherwise, meld.

Willie picks up the salt shaker. “This is the best — Himalayan pink salt,” he says. “It’s very healthy. And we have a special system for our drinking water that makes it alkaline.”

John adds that feelings about food aren’t as black and white as salt and pepper. “A taste can take you back in time and make you remember things you never thought you would,” he says.

He brings out a plate of Red Sonja, Mundo’s signature tapas. He squirts lemon juice on the lentil and bulgur wheat appetizers to enhance the subtle punch of the Oriental spices. No fork is necessary — he rolls one up in a lettuce leaf, and it becomes the perfect bite-size treat. 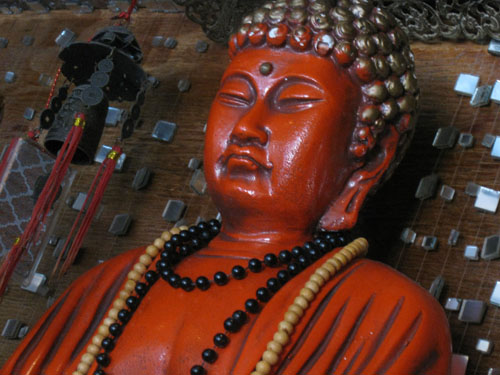 Photo by Nancy A. Ruhling
A chili-red Buddha is a calming influence.

Willie and John never dreamed that Mundo would be such a success; they simply hoped it would be a place that people like to come to as much as they do.

“The biggest compliment we get is consistency,” John says. “We check to make sure every dish is perfect before it comes to the table.”

When John’s off duty, he spends his time reading about health, nutrition, the healing power of food and spirituality. He brings all that he learns to Mundo’s kitchen. 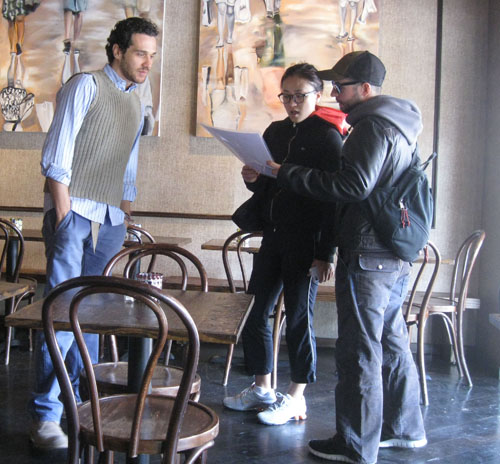 Photo by Nancy A. Ruhling
John greets a couple of customers before Mundo opens.

Willie, too, likes to read, but he also likes to ride his bike. It’s a bicycle, not a motorcycle, but he wouldn’t mind roaring down the road on a Harley.

One thing neither wants to do is open a second Mundo; one is work and reward enough. In fact, they’ve started closing on Wednesdays just so they can have some time off.

Willie hasn’t thought much beyond performing the day-to-day operations at Mundo. “I don’t like the intentional,” he says. 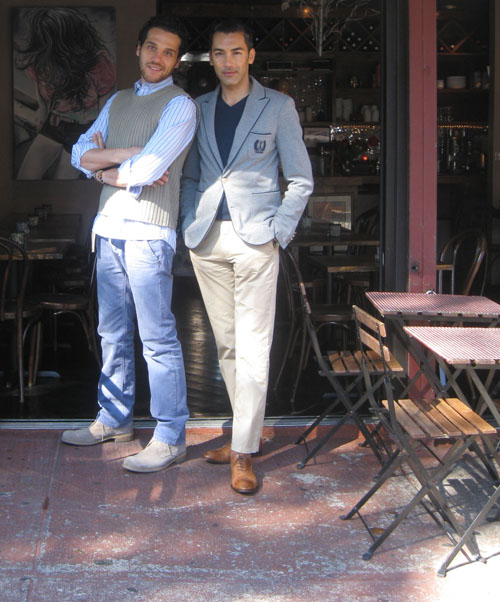 Photo by Nancy A. Ruhling
For John and Willie, Mundo’s all the world.

Willie may want to wing it, but John has bigger plans. “Maybe someday we’ll open a spiritual retreat or a detox center,” he says.