The apartment is filled with bikes and Buddhas, avant-garde art and animals. Finster the French bulldog is sitting on the beige rug, the one that matches his fur, guarding the cats Raya and Zophee.

The sweet scent of votives mixes with the acrid smell of Billy Bruckner‘s cigarette smoke. Coffee, as fresh as the morning, is brewing.

Billy, a cherub with big blue eyes and tattoos who liberally sprinkles his sentences with “dear,” is sitting on the sofa. He doesn’t like to think about the past, but since he’s asked, he politely complies like a schoolboy in detention reciting an assignment to the teacher. 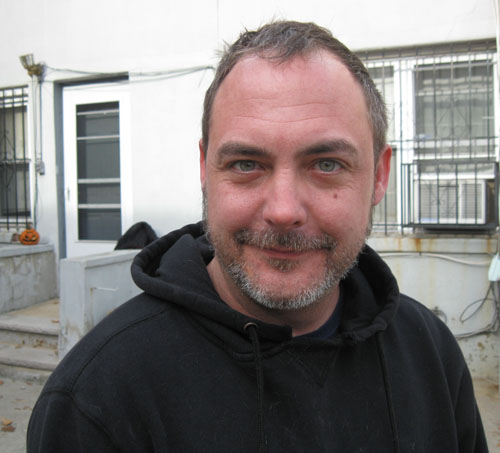 Photo by Nancy A. Ruhling
Billy always sees the bright side.

Childhood? Oh, it was “horrible,” he says, not a tinge of regret in his voice.

He grew up “quite poor” in Uniondale, a working-class neighborhood on Long Island. The thing is everyone else was in the same boat, so he never even noticed, well not much anyway. 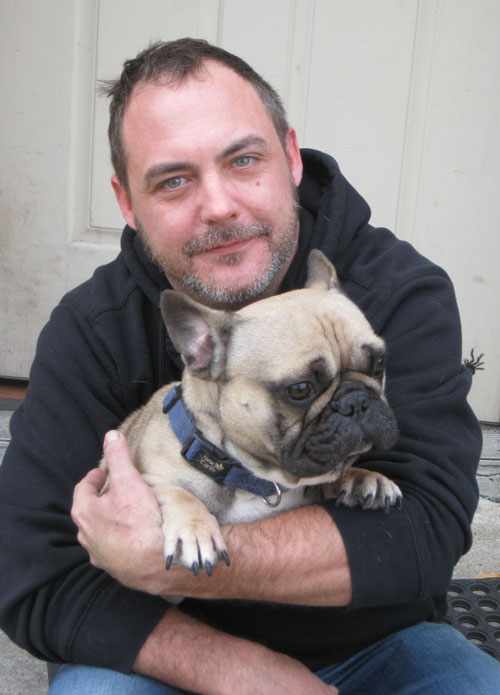 But he did notice big time when his father left the family. “He was bipolar,” Billy says. “He was mentally and physically abusive.”

He was 9 when his parents split and his mother took a full-time job in Manhattan to keep food on the table. “It was a horrible divorce, and my father still stayed in the picture and in my life afterward,” he says. 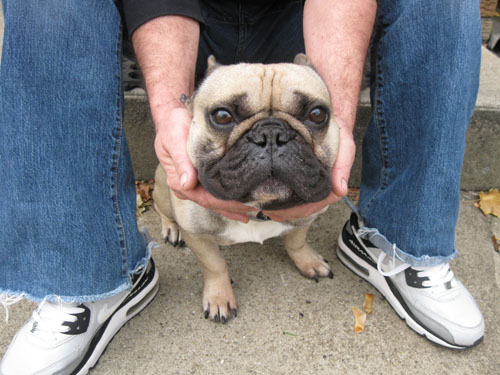 Photo by Nancy A. Ruhling
Billy helps Finster mug for the camera.

Unlike a lot of single-parent kids, Billy didn’t have to take on any adult responsibilities. His mother took care of that and of him.

Billy’s main interest in high school was drugs, where he majored in marijuana. “I was a dead-end kid,” he says.

Still, he managed to graduate and enrolled in Nassau Community College with the idea of earning a liberal-arts degree. But that didn’t last long. 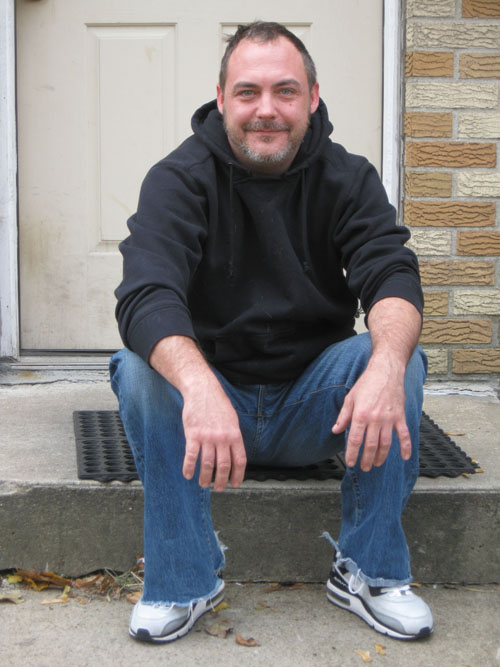 Photo by Nancy A. Ruhling
Billy’s proud to be a working-class guy.

By 20, he was a full-fledged member of the workforce: He became a maintenance man for the Salvation Army’s Wayside Home School for Girls in Valley Stream, which has since been shuttered. 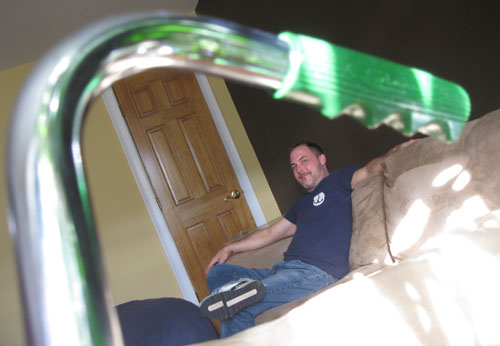 Photo by Nancy A. Ruhling
A handlebar view of Billy.

“I liked my job,” Billy says, adding that for $14 an hour he did everything from landscape work on the 14-acre compound to construction and snow removal. “I enjoyed dealing with people.”

Billy was pretty much satisfied with his station in life when he ran into his cousin, who had a new car and a new job working for Dent-X, a company that removes car pings without applying paint. A year later, he got a job there, and after four years, bought out his territory and opened Dents-R-Us.

“I enjoy the freedom my job gives,” he says. “I travel around Manhattan from dealership to dealership.” 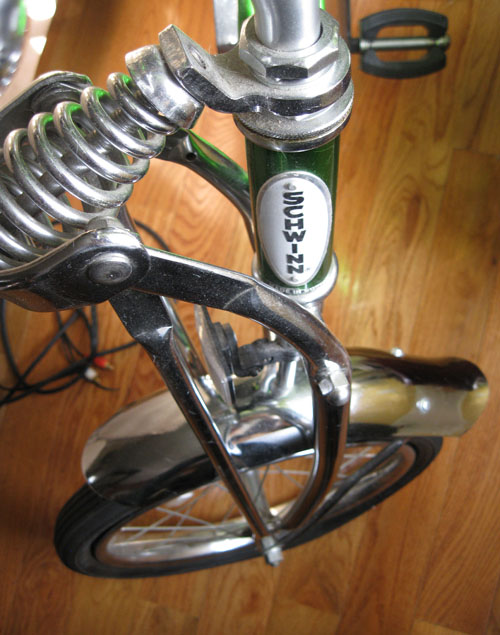 Photo by Nancy A. Ruhling
Billy’s too busy to ride his 1973 Schwin Stingray.

He also loves avant-garde contemporary art, Buddhas and bikes. “I’ll see a piece of art I like, and I’ll buy it,” he says. “The Buddhas are beautiful, they relax me. I collect vintage bikes, but I don’t ride them much.” 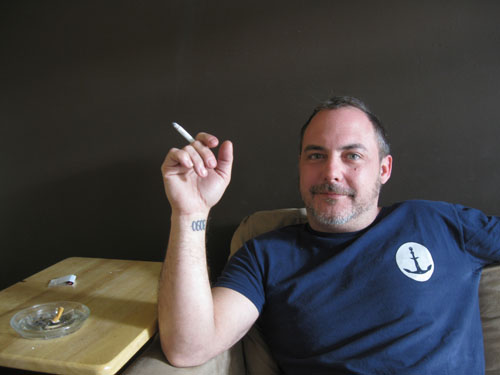 Photo by Nancy A. Ruhling
Billy relaxing in his apartment.

The three bikes in the living room — a carbon-fiber racer and a late 1970s Haro Freestyler remake hanging on the pole on the wall and a 1973 Granny Smith apple-green Schwin Stingray by the window — are only the tip of the tire. Billy has about a dozen more in his garage.

“I’m so enveloped in my work that I don’t have much time for hobbies,” he says, cigarette smoke circling his head. 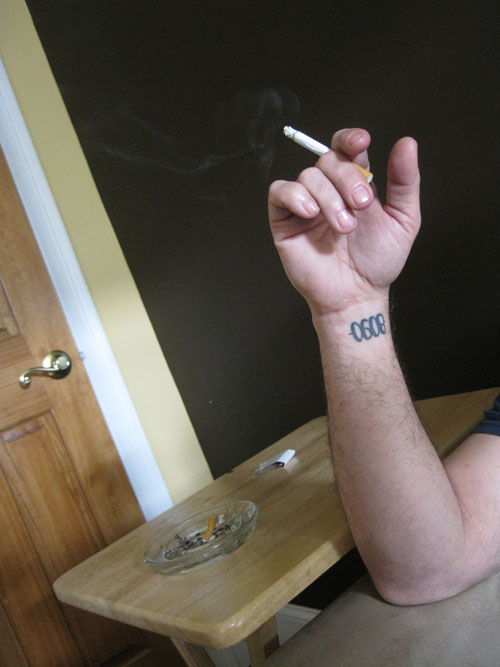 Photo by Nancy A. Ruhling
Smokes and tatts.

He also loves Finster, his best buddy. And his fiancée, Barbara Laboy, whom he almost lost before he found her forever. They met 15 years ago at a party and dabbled at dating. A couple of years ago, he ran into her on the N train on his way to the Museum of Natural History in Manhattan. Billy was seeing someone else, so nothing happened.

A year later, a friend called to say he was having dinner with Barbara. Billy raced out of the house to join them, and the relationship was immediately re-established. This time, it took. Soon, they will announce a wedding date.

Yup, Billy, who recently turned 42, is one lucky guy; his personal life and professional life are going well. “Someday soon, I want to expand my business,” he says. 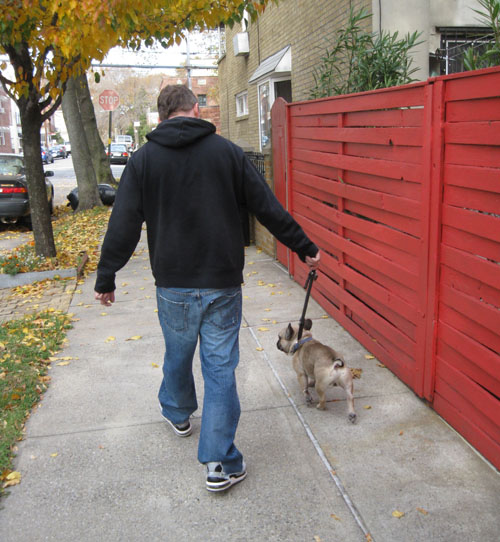 Photo by Nancy A. Ruhling
Billy and Finster take a stroll.

All is complete when Barbara comes in with cup of coffee, and Finster sits at his master’s feet.

Billy surveys his surroundings and smiles. “I’m a truly blessed person,” he says. “From my tumultuous upbringing to my line of work, everything has been so graciously given.”