The wind’s whipping across the rooftop, slamming the door, BOOM! BOOM! BOOM! The N train’s whoosh-clanking into the Ditmars Boulevard station.

Enrico de Trizio and Giancarlo de Trizio start jamming to the rhythm of their new-found city. The brothers — that’s the bespectacled Enrico on the melodica and the ponytailed Giancarlo on the cajón — have never played to the sky before, but once they start, they don’t want to stop.

Ah, yes! This is why they came to New York City!

Home — Molfetta, Italy — is a long way away, and they don’t miss a beat when they say they miss it. But to be able to play music in the greatest city in the world, why there’s nothing like the sound of it. 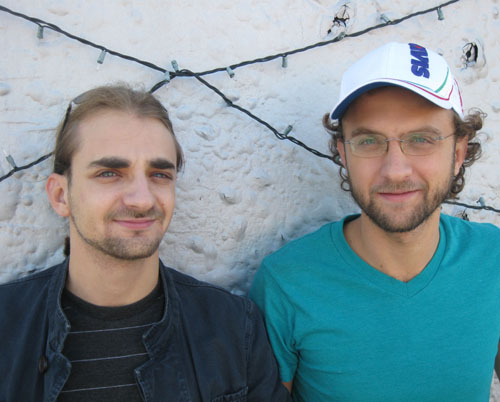 When they were growing up, America wasn’t even on their radar. They don’t come from a musical family — mom is a teacher, and dad is an accountant. They didn’t even start taking music lessons until they were in middle school. When Enrico, the older, discovered piano, Giancarlo matched him key for key.

“The school orchestra only had room for one pianist,” Giancarlo says. “So Enrico and I alternated piano and percussion.” 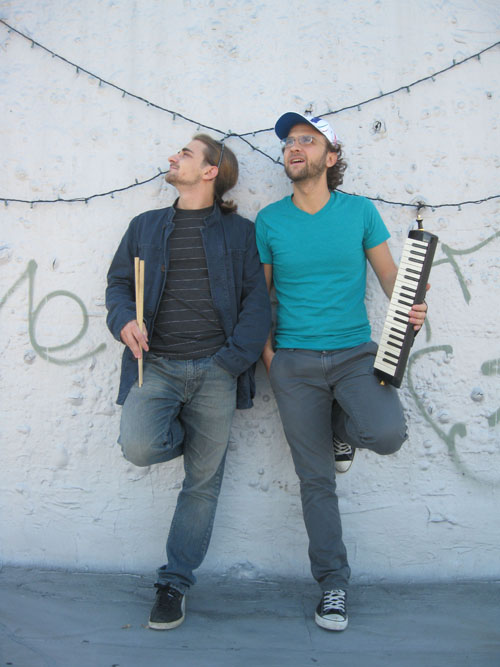 Photo by Nancy A. Ruhling
Giancarlo and Enrico are happiest when they collaborate.

Enrico stuck to his scales on the piano. “It’s the only instrument with 88 keys,” he says. “With it, I could understand everything about every other instrument.”

Giancarlo began pounding out a career path on percussions. “It was more comfortable for me,” he says. “I can’t explain it; it’s instinct. By the time I was 14, I was playing drums eight hours a day.” 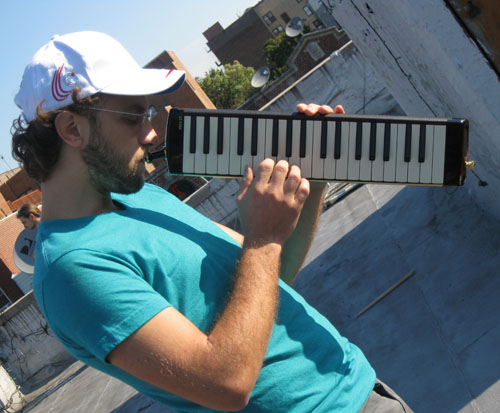 Photo by Nancy A. Ruhling
Enrico is the keyboard guy.

Each graduated from the prestigious N. Piccinni Conservatory in Bari, Italy, which emphasized classical training. Shortly afterward, Giancarlo got it into his head that he wanted to study at the Berklee College of Music in Boston, which is where they both ended up.

Lured by the bright lights of Broadway, they came to New York after graduation. Enrico envisions himself as a music director on Broadway, and Giancarlo, who is touring with the musical In the Heights, likes the variety of musical opportunities — Broadway shows, big bands, studio sessions — that are open to a player like him. 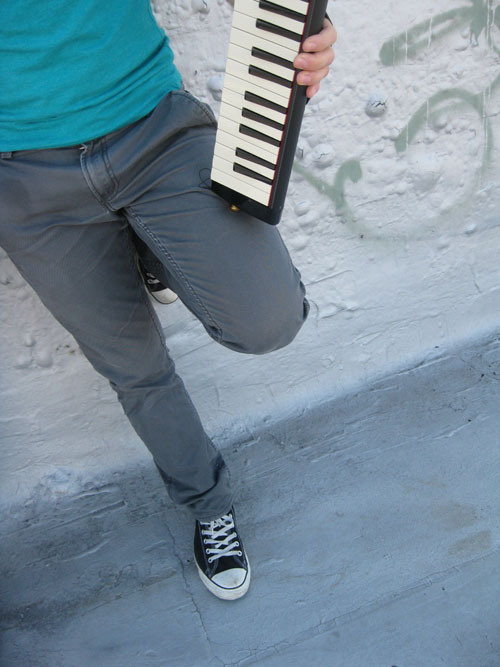 Photo by Nancy A. Ruhling
Enrico and his melodica.

The award-winning musicians find they always are in demand; word of their talent spread quickly, and on any given day, they can have a mix of four to six gigs and auditions.

They thrive on live performances. “We get energy from the audience; we give and get back, it’s like a conversation,” Giancarlo, the more talkative of the two, says. 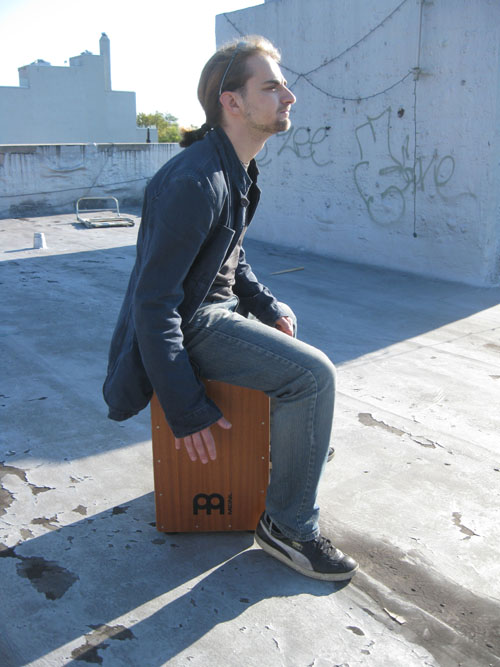 Photo by Nancy A. Ruhling
Giancarlo playing the cajón.

Enrico also likes to write music, and soon he hopes to complete his first album, Mind’s Eyes. Giancarlo, of course, plays percussion on it.

“It’s mostly instrumental,” Enrico says, adding that Giancarlo’s his “right arm” in the creative process. “It doesn’t have a definite style. It has ethnic and jazz influences and everything we’ve learned. It has simple melodies and a cinematic taste.” 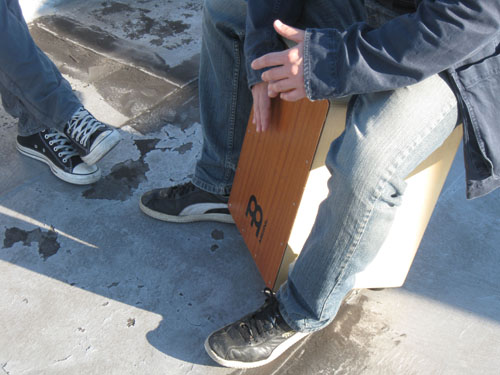 Photo by Nancy A. Ruhling
The brothers love to jam.

Enrico and Giancarlo may have known a lot about music, but when they came to the States in 2007, they didn’t know any English. The transition was easier, they say, because they live and work together and help each other out.

“Our goal was to integrate ourselves into the American culture,” Giancarlo says. “And for a long time, we avoided meeting other people from Italy.” 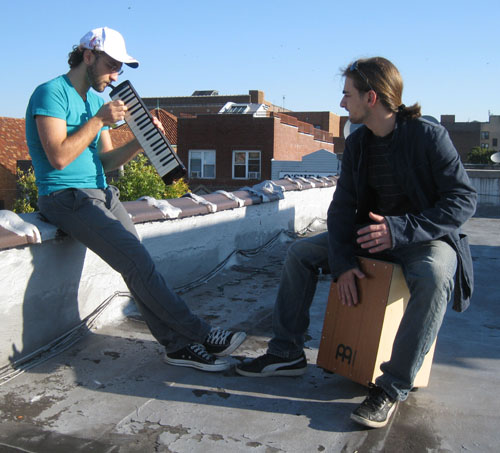 Photo by Nancy A. Ruhling
Enrico and Giancarlo at their first rooftop session.

Adds Enrico, “The creative, artistic spirit needs to try everything and absorb everything, and we can do that easily in Astoria.”

But their immersion also has made them long for home — mom’s cooking, the smell of the sea, the way the sunlight hits the street, the weather. 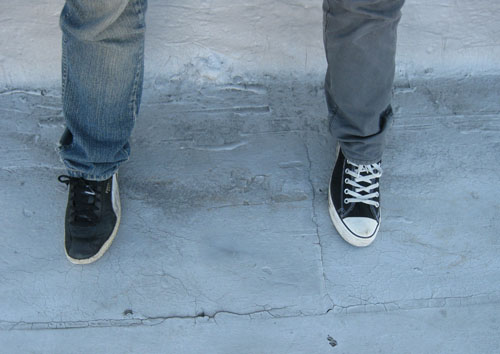 Photo by Nancy A. Ruhling
Giancarlo and Enrico in step with each other.

There are some things they can remedy; when they long for the water, they go to Astoria Park to gaze at the East River, and when they want some home cooking, they head to the kitchen to try to recreate mom’s recipes. Doing so brings back childhood memories.

Enrico and Giancarlo never thought that they’d end up in New York City or that they’d be doing their dream jobs.

Enrico’s 28 and Giancarlo just turned 25; they’re still young enough to blush when someone calls them cute. 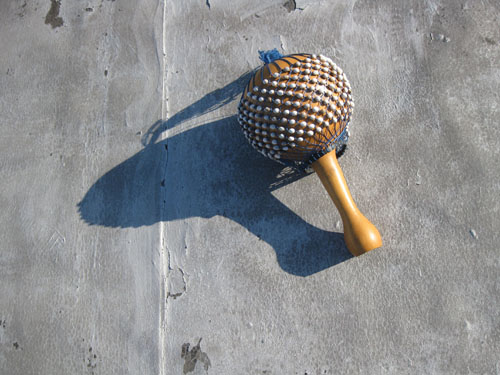 Photo by Nancy A. Ruhling
The wind plays the axatse with a rooftop roll.

Ten, 20 years, that’s a lifetime away. They have plenty of time to change their tune.

As they end their impromptu session, the wind rolls Giancarlo’s axatse across the roof, shaking its seashells.