Every day, Ron Hall walks three and a half miles. He’s a heavy smoker, has been for 42 years, and he figures that the exercise cancels out the tobacco. 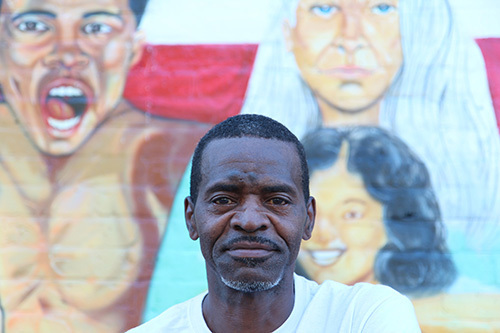 Photo by Nancy A. Ruhling
Ron started drawing when he was 10.

Now, his strolls have an added purpose: They give him the opportunity to pass by his mural.

With support from the community, he painted Astoria: We Are All Family on the 8th-Street side of the deli on Astoria Boulevard where Two Coves Community Garden meets the Astoria Houses projects. 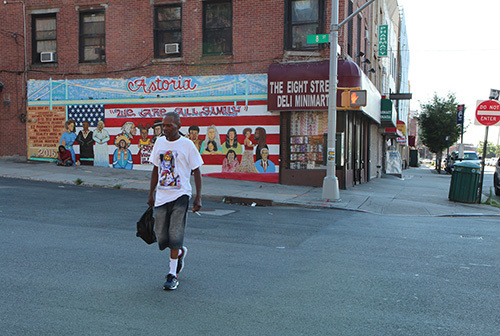 Photo by Nancy A. Ruhling
Ron’s We Are All Family mural on 8th Street at Astoria Boulevard.

“Unity is my message,” he says. “People of all different nationalities and all ages live in Astoria.”

Ron, a powerfully small man, runs his hand across the bricks of the 40-foot-long work that superimposes a sea of faces on the Stars and Stripes.

A Mexican, a Muslim, an Irish, a Hispanic, an Arab, a Puerto Rican, a Native American, an African American, a Chinese, a Hasidic Jew, a silver-haired senior citizen and a baby are among those who smile back at him. 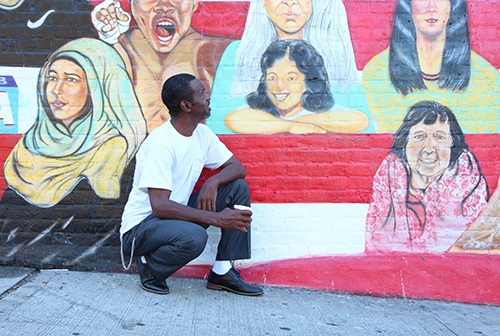 He pauses at the painting of the little girl wearing a cheerleader’s uniform.

There’s a huge tear rolling down her face and a sign in her hand that pleads, “Stop the Violence Let Me Grow Up!”

“The placement of the mural is ideal,” Ron says, smiling. “Four bus lines go right by it.” 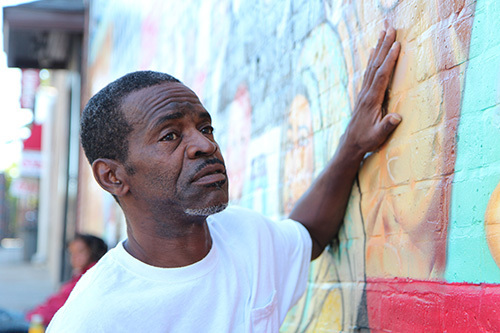 Photo by Nancy A. Ruhling
It took him two weeks to do the painting.

Although this is not Ron’s only mural, he typically creates smaller works.

His shoebox studio, in the living room of his two-bedroom unit at Astoria Houses, is illuminated by a dim ceiling fixture supplemented by a trio of 100-watt bulbs shining from a vintage pole lamp. 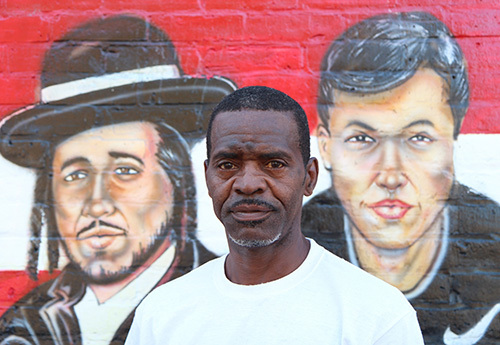 Photo by Nancy A. Ruhling
The mural shows the faces of the community.

The air conditioner is in the back bedroom, so Ron keeps the window open.

Ron’s four easels are filled with 16-inch by 20-inch canvases. He bought dozens of them because they were on sale.

His portraits, which feature applied rhinestones and glitter, include stenciled designs and airbrushed areas. 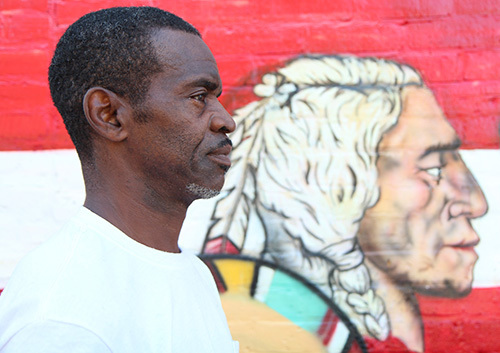 He keeps the compressor in the front closet to muffle the noise so it doesn’t bother his neighbors.

Although Ron has tried out a couple of careers, it was inevitable that art would be the one that he stuck with.

Growing up in Brooklyn as an only child, Ron began drawing at 10, and other than a couple of classes in grade school and high school, he’s had no formal art training. 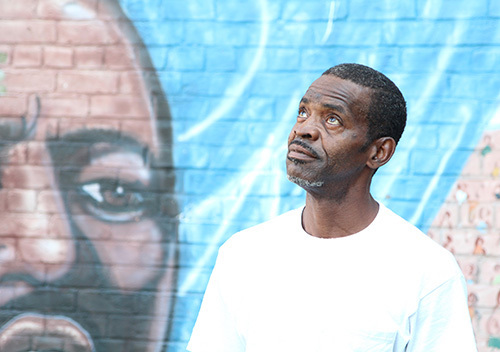 Photo by Nancy A. Ruhling
Ron touched up the Martin Luther King mural at Astoria Houses.

“I draw what I see,” he says. “I was inspired by my aunt, who was a seamstress. I watched her put together the pattern pieces. And by my collection of comic books.”

Ron, who was in the school system’s gifted program, started tutoring his peers when he was in 9th grade. To this day, he’s proud that it was a paid position.

“I persuaded my mother to buy me the World Book Encyclopedia,” he says. “I don’t know how she scraped the $200 together. I read them every day, and when I came across words I didn’t know, I looked them up in the dictionary, memorized them and made a habit to use them in sentences.” 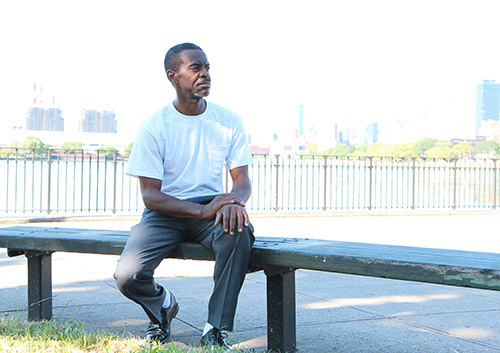 Ron’s father died shortly before his high school graduation. He did a 2-1/2–year stint in the Air Force, training at Lackland Air Force Base in San Antonio, Texas then serving in Duluth, Minnesota.

When he got out, he sampled a job or two before settling in as a high school security officer.

Things were swell until he started smoking pot and was introduced to cocaine. 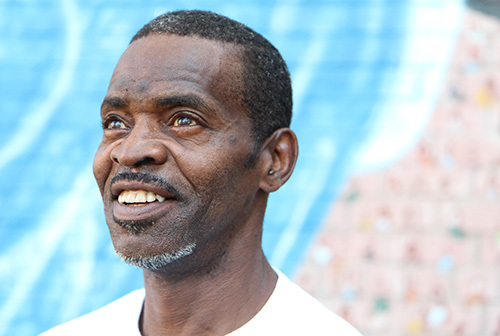 Photo by Nancy A. Ruhling
He overcame a problem with drugs.

“I was curious about drugs,” he says. “I was never an addict; I was only a recreational user. I always did my work and paid my bills first.”

It was an injured Achilles tendon that led to Ron’s downfall, which in retrospect turned out to be a good thing.

“I was at rock bottom,” he says. “I lost my job and my second wife – I’ve been married three times and have five children – and I was afraid the coke would make me crazy.” 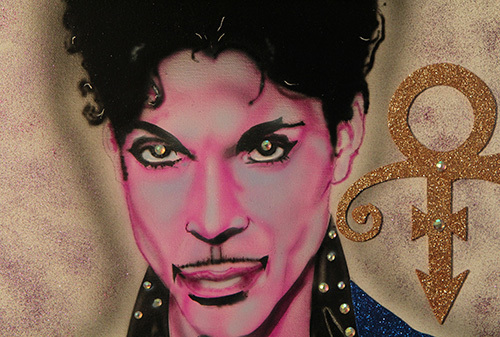 Photo by Nancy A. Ruhling
A detail from Ron’s Prince portrait.

Instead of going to rehab, he moved to Statesville, North Carolina, his mother’s hometown, to get a fresh start.

Over the course of 20 years, he got clean and got serious about art, setting up a business.

“I kept coming back and forth because my mother was ill,” he says. “I finally moved back to New York in 2008.” 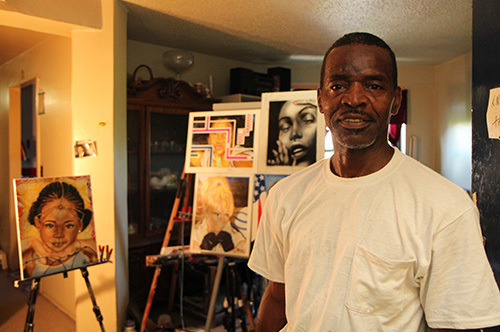 Photo by Nancy A. Ruhling
Ron’s living room is his art studio.

He uses a variety of techniques, notably airbrushing and stenciling, to create his comics-centric portraits, many of them of famous people.

“I got the idea for airbrushing when I saw the World War II girlie art on the noses of B-52 bombers,” he says. 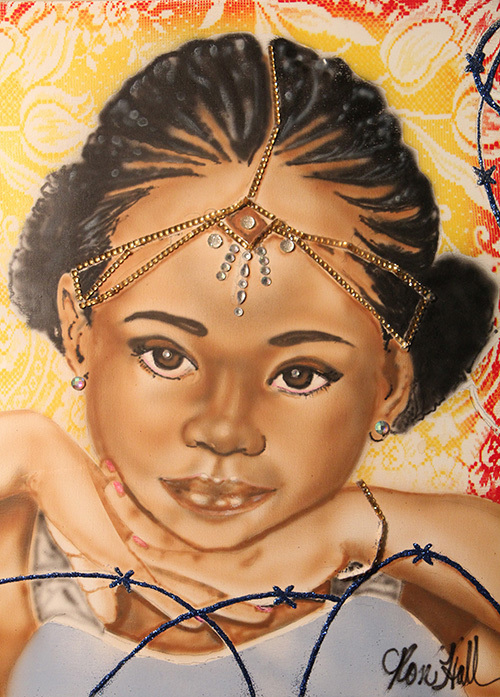 Photo by Nancy A. Ruhling
A portrait of a princess behind barbed wire.

He picks through a pile of paintings, producing ones of Muhammed Ali, Aaliyah, Prince, Michael Jackson, the Rev. Dr. Martin Luther King Jr. and Malcolm X.

“I start from photos I find in books and magazines,” he says. “I draw what I see then embellish.”

Ron generally paints during the day, working to the blasting beat of R&B. 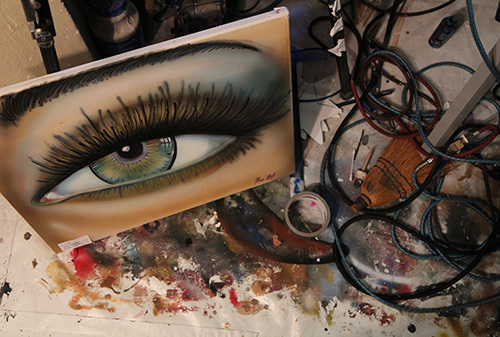 Photo by Nancy A. Ruhling
Keeping an eye on the studio.

As for the mural, Ron says that unlike the ones in nearby Welling Court, which are painted over once and sometimes twice a year, his is made to be a permanent part of the community.

At the moment, a homeless woman sits cross-legged against it, adding her face to Ron’s family.