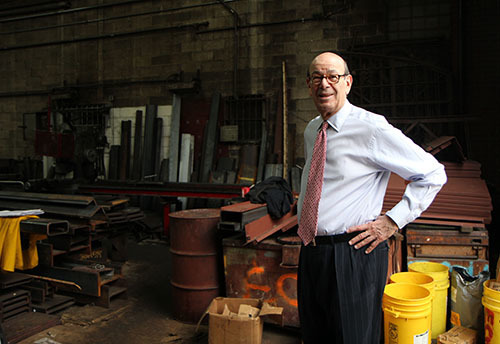 Photo by Nancy A. Ruhling
Harvey has been working for Empire City Iron Works since 1961.

Oh, yes, Harvey says, we did 16 pavilions there.

Sixteen! It was a rush job, they say simultaneously. 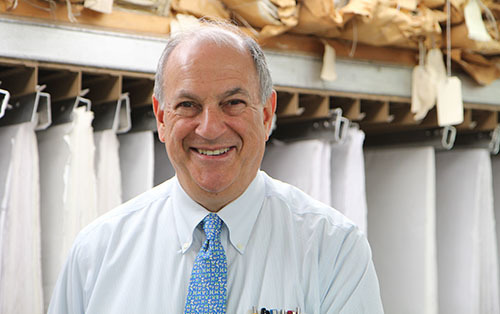 Photo by Nancy A. Ruhling
Edward joined the family business in 1968.

There are many more big-name clients, but when you’ve been in business as long as Harvey and Edward – a combined total of 103 years – and your company is 112, well, sometimes even the more obvious ones like the U.S Tennis Association’s Arthur Ashe and the Louis Armstrong Stadiums don’t come readily to mind without a little coaxing.

Empire City Iron Works, the company started by their grandfather, Leopold, in 1904, is the oldest steel and miscellaneous iron company in New York City. (More photos.) 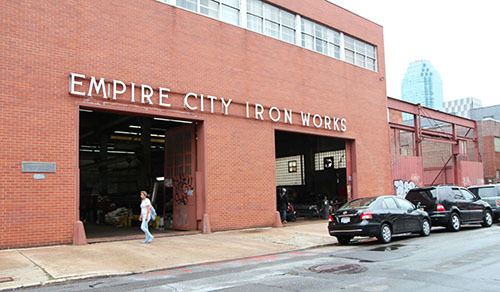 “Primarily, we make staircases,” says Harvey as he heads to his second-floor office. “You can see some of them here. When we started building the factory in 1959, it was my dad’s idea to put different styles on each half flight so architects could see what we do.”

He points to the landing right outside the elevator; it’s from the arrival area at JFK. 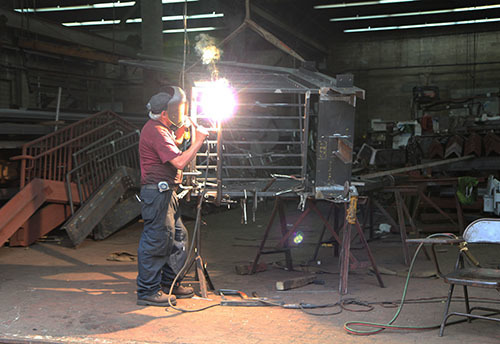 Photo by Nancy A. Ruhling
A staircase under construction.

Before he and Edward sit down, he unfurls a set of ancient blueprints that were recently unearthed from the files during a renovation.

During World War II, Empire City Iron Works had contracts with the British and U.S. governments to manufacture parts, including ammunition boxes and water-tight doors, for the ships being built in the Brooklyn Navy Yard. 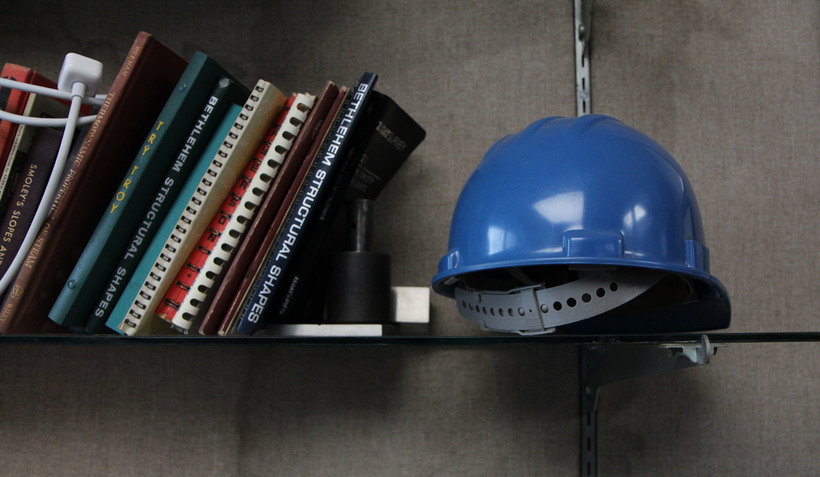 He’s not sure exactly where it is, so Edward prompts him — between Park and Lex, on the north side of the street. 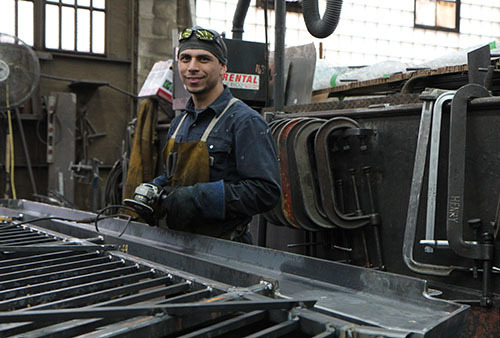 Photo by Nancy A. Ruhling
Henry Alvarez at his post.

Harvey, who is 76, and Edward, who just turned 70, have never worked anywhere else but Empire City Iron Works, and they couldn’t be happier.

The brothers, who often finish each other’s sentences as spontaneously as an old married couple, declare that it has never occurred to them to be bored.

“It gives us great satisfaction to point to major buildings in New York City and say, ‘We did this, we did that,’” Harvey says. 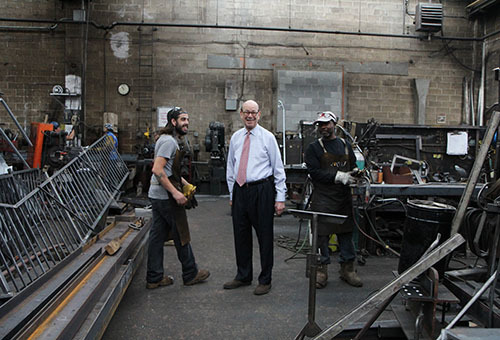 Photo by Nancy A. Ruhling
Harvey in the factory, which his father built in 1959-61.

Empire City Iron Works started out in Manhattan and moved to Long Island City in 1911. It stood a block away from its current location on 46th Road until 1959, when their father began to build the big red-brick factory.

“To get enough land, he had to buy the row houses across the street one by one as they came up for sale,” Harvey says. 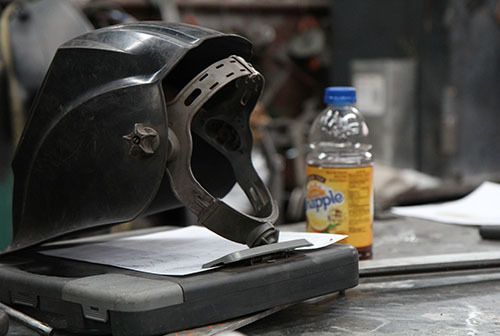 Photo by Nancy A. Ruhling
A welder’s helmet waits for the shift to begin.

Adds Edward, “That’s why it took so long.”

The brothers, lanky and loquacious, joined the company after earning civil engineering degrees in college, Harvey from Brown University and Edward from Columbia University. 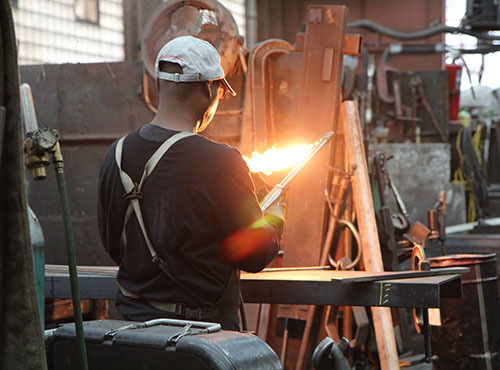 Photo by Nancy A. Ruhling
Michael Husbands is one of some 100 employees at Empire City.

There was never any question that their business would be the family business.

“In the 1950s, someone wanted to buy the company, but our father wouldn’t sell because he had two sons,” Edward says.

Harvey isn’t sure whether Edward has heard this story, but he had applied to Con Ed, where he had worked in the summers of his youth, and actually got a job offer. 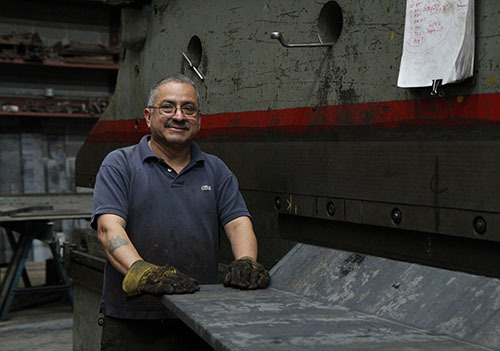 Photo by Nancy A. Ruhling
Julio Landivar is part of the Empire City family.

“When it got back to my dad, my grandfather called me and that was that,” Harvey says, smiling widely.

Less than a year after Harvey joined Empire City, Leopold died so he ended up working for his father and his uncle.

In 1975, when their father died, Harvey and Edward took over.

“If you think it’s easy to run a family business, it’s not,” Edward says. 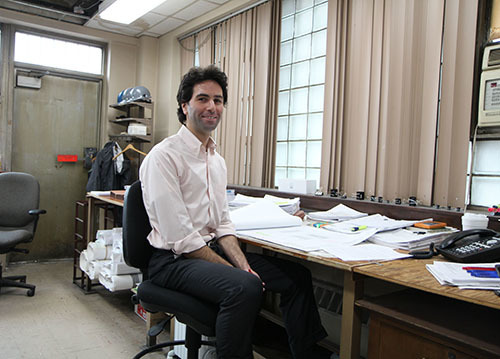 Harvey smiles and nods in agreement.

“We have been successful because we were taught very well by our father how to run the business and how to make things,” he adds.

Harvey’s son, Simon O. Heffner, joined Empire City Iron Works 15 years ago after a brief career on Wall Street. He went to night school to earn a master’s degree in construction management and an MBA.

“Running Empire City Iron Works is a great deal of responsibility,” he says. “But I’m excited to be involved.” 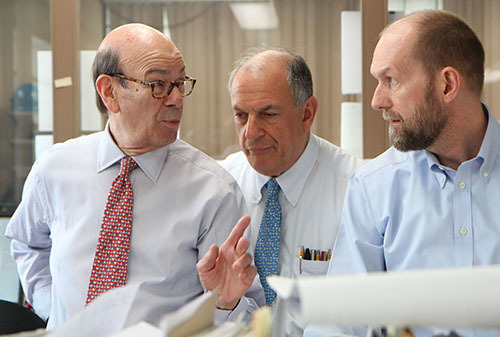 Photo by Nancy A. Ruhling
Harvey, Edward and Jonathan Weaver work to solve a problem.

Edward and Harvey, who are young for their ages, swear they aren’t retiring any time soon.

Their grandfather worked until the day he died, and their father was at the factory when they rushed him to the hospital the final time.

“We Heffners have a tradition of retiring in a pine box,” Edward says.

“I wouldn’t want to say it that way,” Harvey counters. “I’d rather say that coming to the office keeps me young.”