Mike Barrett opens the closet door and brings out a loose white jacket and a hat with a veil. When he zips himself into this outfit, he looks like an astronaut.

He’s not going into outer space. He’s only going onto the roof of his house.

He climbs the closet’s metal ladder then, using a rope, hauls up a large bucket that’s the color of a construction cone. It’s filled with equipment.

He sets it down by the hatch door. Toward the center of the roof, there’s a wooden contraption that looks like a set of filing cabinet drawers. Its top is secured with a cord. 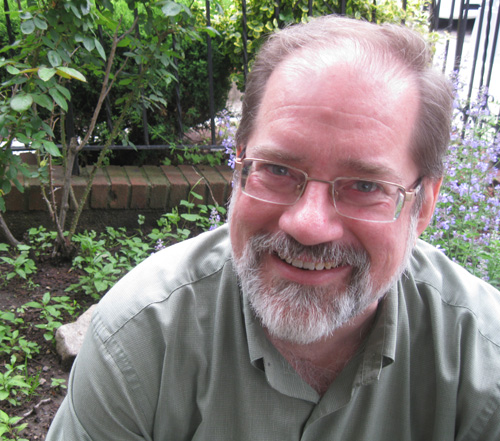 Photo by Nancy A. Ruhling
Mike, the newbie beekeeper.

It’s a beehive, and it’s busy buzzing. It’s home to 50,000 of the singing stingers, and as Mike fearlessly approaches, a bunch of bees surrounds him. Although these guys are a little agitated, they’re not up in arms — yet.

“I’m not afraid of the bees,” Mike says. “In the beginning, I had a little trepidation. Yes, I have been stung.”

Still, it might be better to head to the second hive. It only has 4,000 of the industrious insects. Mike brings out his bellowed smoker, a metal device that looks like the Tin Man’s oil can. With this, he will keep the bees at bay. 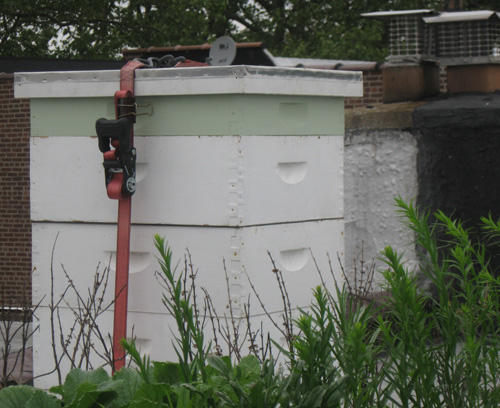 Photo by Nancy A. Ruhling
The larger and older of Mike’s two rooftop hives.

Mike, a systems administrator for New York University’s medical library, is new at this beekeeping business; he got the first hive on Mother’s Day last year. The queen and her 4,000 loyal subjects came in a container the size of a shoebox. The cost was $350.

“I got interested after attending a honey tasting by a meetup group,” he says. “We sampled all kinds; I didn’t know there was a difference. The multi-floral was so complex.”

Before he knew it, he was hooked on the honey makers. “At first, I just thought of it as a box of bugs,” he says. “Now, I think of them as pets — pets who give back by producing honey. I care about them.” 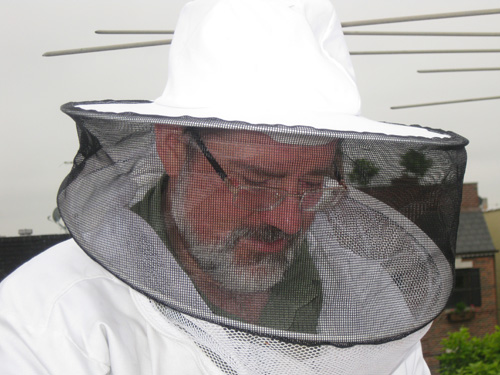 Photo by Nancy A. Ruhling
Mike all suited up for a visit to the hives.

Mike, who was born in Germany, spent his boyhood traveling. His father was in the army, so the family lived in Texas, Alabama, Georgia and New York as well as Germany. “I always felt uprooted,” he says.

Some two decades ago, he came to Astoria to move in with his grandmother, in the house he still lives in. When she died, he stayed. “She was the original owner,” he says. “She paid $6,000 for it.”

Mike, a fit fellow with a graying goatee and an easy laugh, has always filled his spare time with interesting pursuits. When he was a student at Stony Brook University, where he earned a bachelor’s degree in computer science, he started an improv group, and five years ago, he set up a meetup group for fencers. 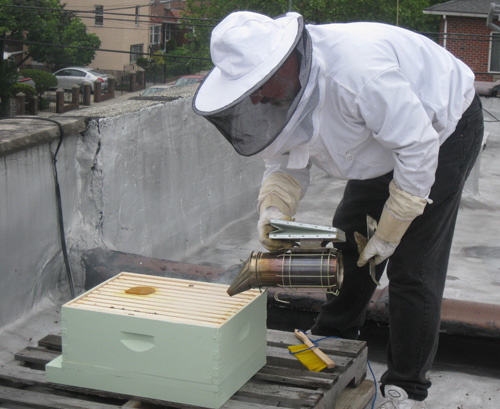 Photo by Nancy A. Ruhling
Mike on smoke duty at the newer hive.

What do beekeeping and fencing have in common? If it were a contest, would the foil fall under the spell of the sting?

“I’ve never really thought about it,” he says. “There’s nothing that really ties them together. They are intellectual pastimes. The science of bees is what attracted me; and fencing is chess with speed.”

When he’s not fencing or tending the bees, Mike has other things to occupy his time. He’s developing an electronic scoring system for fencing and has just started work on a computerized home automation system. “I don’t know where they will go,” he says. 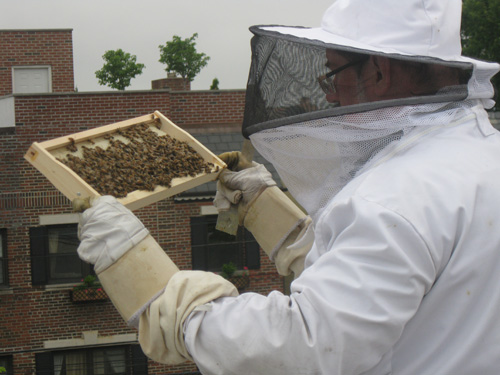 Photo by Nancy A. Ruhling
Mike isn’t afraid of stings.

He doesn’t know where they’re taking him, but he’s willing to walk the yellow brick road, whether wearing a netted veil or a metal-mesh mask.

But let’s get back to the bees. Mike places a bottle of Greedy Bee on the table as if it’s some rare vintage Champagne and offers a teaspoon. This is the fruit of this rooftop hive. 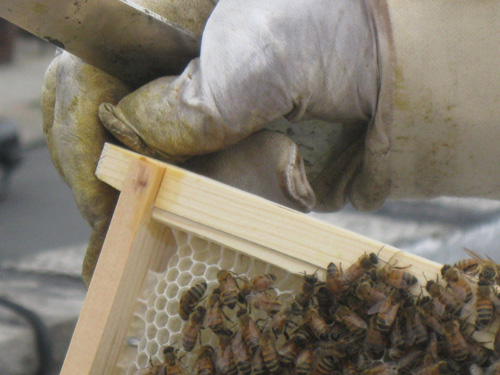 Mike has filled his front garden with bee-attracting plants to get the proper medley of flavors, and his honey tastes like a bouquet of fresh-cut flowers.

Mike’s hives will, undoubtedly, expand. Each queen lays 1,000 to 2,000 eggs a day. Although she lives for several years, the other bees perish after only a month in the summer. In the winter, the hive goes dormant. The bees huddle and flex their muscles to keep the hive at their favorite temperature, about 90 degrees. 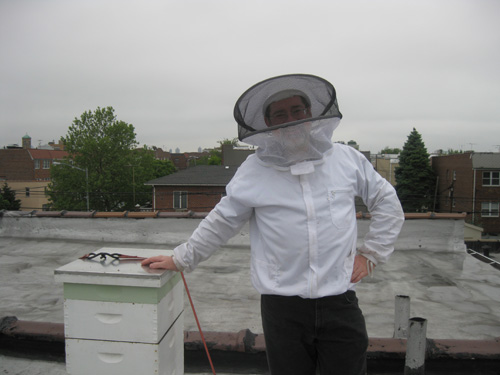 Photo by Nancy A. Ruhling
To Mike, the bees are pets not pests.

“The hard thing about the winter is worrying about them,” Mike says. “You can’t open the hive because the cold will kill them.”

Mike isn’t looking to have more hives, but he does want to get more involved with the beekeeping community.

“New York City beekeepers sell their honey to benefit nonprofits and put bees in public gardens,” Mike says. “We want to be good citizens of the city, and I want to be a helper in that vision.”

Mike’s also looking forward to working with bee recovery teams that remove wild hives from places where they’re not welcome. 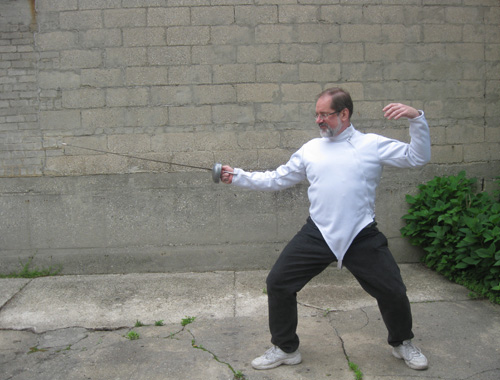 Photo by Nancy A. Ruhling
When he’s not beekeeping, Mike takes up his fencing foil.

“When you see bees swarming, they usually are looking for a new home, and you don’t want it to be yours,” he says. “That’s where we and our vacuums come in.”

Hey, wait a minute. One of Mike’s flying friends has followed him into the house. She’s buzzing around the ceiling fan.

If she doesn’t get back to the hive, she’ll die. So Mike entices her onto the tip of a wire hanger then scoots her toward the open window.

As the bee spreads her wings, Mike breathes a sigh of relief.