On the kitchen countertop, there’s a sliver-slim volume. This Is My Life will tell us everything we need to know about Jenn Wehrung.

She’s happily married with four kids, two dogs, four kittens and two cats (the gerbil didn’t make it). She has — let’s make that “had” — a booming fashion business. Before that, she was a dancer with a best-seller tucked under her tutu. She just taught her son to play piano.

“But I don’t even play piano!” she complains.

Gotcha. You didn’t really believe all that stuff, did you? 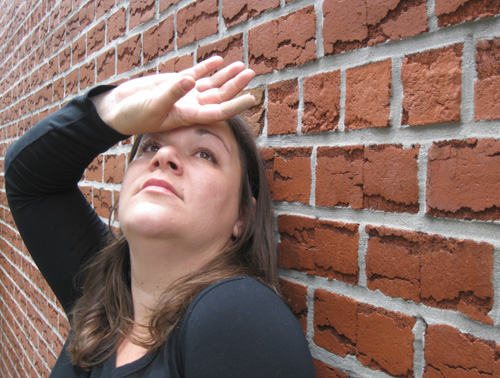 Photo by Nancy A. Ruhling
Jenn likes to laugh at life.

“And I don’t have a son!” Jenn’s bell-like voice rises then falls into a funny-bone laugh.

The only thing she does have — besides her joke-a-second sense of humor — is Ripley, a playful 1 1/2-year old goldendoodle.

So what’s the real story? Jenn is a performer, writer and all-around funny broad whose garden grows gnomes. When she’s not on stage, she’s in Nannyland.

This Is My Life was written when Jenn was 10. It was part of a strange school assignment in which students were asked to pen a fake memoir for posterity. Some of the kids only wrote a page. Jen filled dozens. 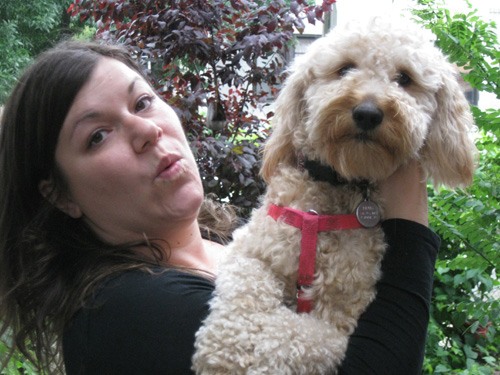 Photo by Nancy A. Ruhling
Ripley likes to joke around with Jenn.

Kidding aside, this much is known for sure. Jenn grew up outside Syracuse and earned degrees in drama and writing from Syracuse University. The only girl in her extended family, she rose to the occasion by turning into a tomboy.

“My younger brother and I are totally different — like chalk and cheese,” she says. “The boys used to dress me up in a hockey helmet and hit pucks at me.”

With the lights of Broadway shining brightly in her big, brown eyes, Jenn turned to her Magic 8 Ball for advice. “It said I should go to London, so I did,” she says. “When I asked it about New York, it said, ‘Maybe later.'”

London was an eye-opener. “Did you know that animal sounds are different in England?” she asks. “I was performing for children, and when I made the American sound for an owl — ‘who, who, who’ — they didn’t know what it was. Turns out, in England owls go ‘twit twoo, twit twoo, twit twoo.’ W-H-O knew?” 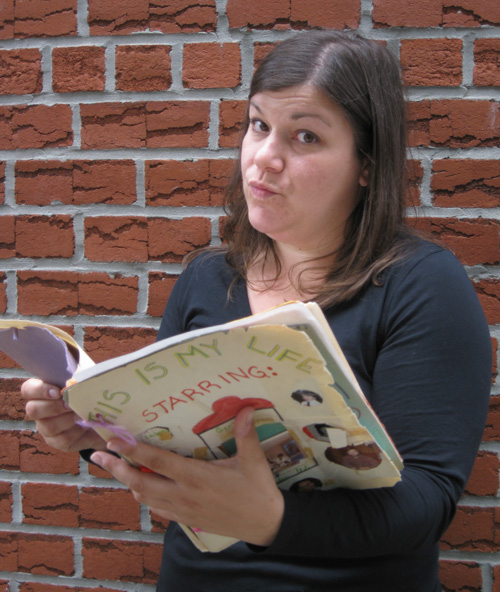 Photo by Nancy A. Ruhling
Jenn reads a chapter from This Is My Life.

Six months later, she did come to New York City. To be discovered. In between waitressing, she got little gigs around Manhattan.

“I almost made the national tour for Hairspray playing Tracy,” she says. “But they told me I was too thin! It was the best rejection I ever got. I was so thrilled I wanted to go out and get an ice cream cone!”

When she got tired of serving people hamburgers and fries, she put down her tray and auditioned to be a nanny. She got the part and played it perfectly for three years.

“The boy I loved died of a heart attack, so in my grief, I quit and went to London,” she says.

She landed her second part as a nanny after her return. It was only supposed to be a one-summer gig, but that was 11 years ago. 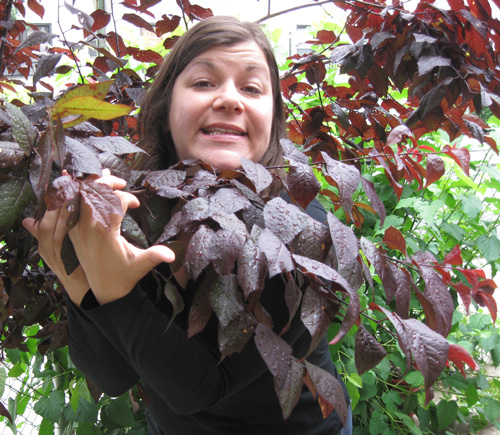 Photo by Nancy A. Ruhling
Jenn wraps herself in leaves not mink.

“The kids are teenagers now,” she says. “The mom and dad need an assistant as much as the kids need a nanny, so I like to think of my job title as major-domo. They are all very supportive of my performing.”

Except for Ripley and her nanny charges, Jenn doesn’t have any children of her own. She was married for, as she puts it, “about 20 minutes” and recently was granted a divorce.

“I replaced my husband with a dog, and I like the dog better,” she says as she puts a pillow under Ripley’s head of Shirley Temple curls.

Jenn loves to perform but hates to audition, and these days, she doesn’t have to. She’s played Caroline’s comedy club several times and gets regular gigs. When she’s not sucked like Alice into Nannyland or acting up on the stage, she’s at the dog park cracking people up.

She finds her material in the humor of everyday life. “I was in the Hamptons, and the lowest bills the ATM machines spit out are $50s,” she says. “Luckily, muffins and coffee cost so much there that it’s really easy to get change.” 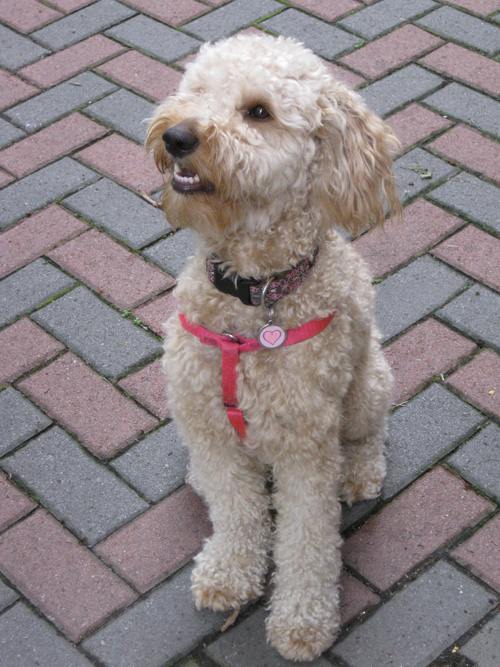 Photo by Nancy A. Ruhling
Ripley in a rare pose: standing still — almost.

After her husband left her, Jenn took up weeding instead of weeping, turning the tables on her sadness by making it part of her stand-up comedy routine.

“People like to open up to me because I look like I’m friendly,” she says. “There was a cleaning lady in the Hamptons who told me about her boyfriend’s hair fetish, and I didn’t even know her name!”

Believe it or not, Ripley was named for the Sigourney Weaver character in Aliens, Jenn’s second favorite movie. (Jaws is No. 1.)

When she’s not on the stage of comedy or life, Jenn likes to cuddle with Ripley and a cup of ice coffee on the couch. “We watch Mob Wives or something else trashy,” she says. 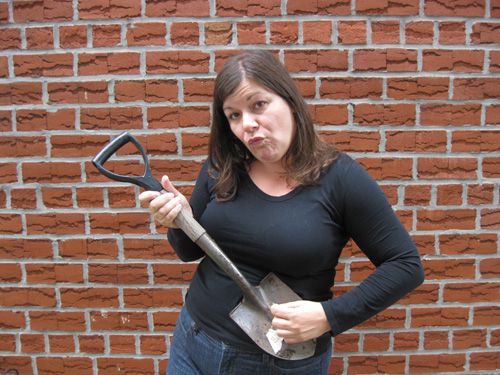 Photo by Nancy A. Ruhling
Jenn’s idea of playing gardener.

Jenn’s also “pretending to write a book.” It’s supposed to be a memoir, but she finds it a lot harder to compose than This Is My Life.

Jenn closes This Is My Life and does what she does so well — laughs.

“Let’s see,” the 38-year-old Jenn says, “according to it, I should be trying to get my fashion business together and writing my next big thriller, Flower of Death.” 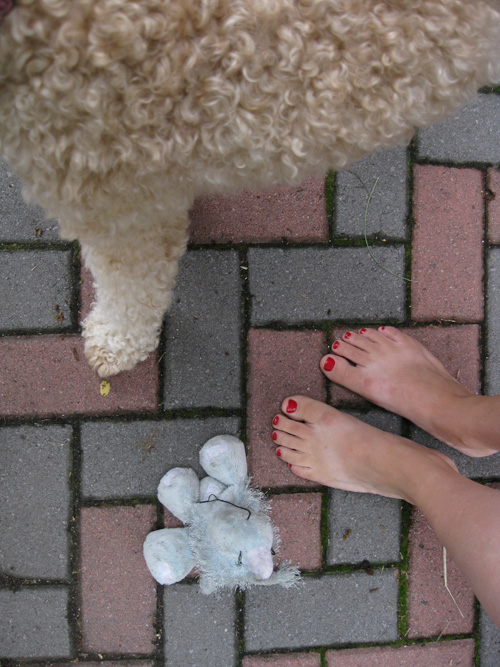 Photo by Nancy A. Ruhling
Ripley and Jenn: paws and painted toes.

Once that’s done, at 48, she’s going back to college, where, according to the book, she’ll major in politics. “Then I’ll be elected governor of Pennsylvania, a state I’ve never lived in,” she says. “I’ll be vice president. Next, I’ll become the first woman president of the United States. My 17-year-old twins will write my speeches.”

She laughs again. Ripley prances to her.

“I have time,” she says, relieved. “I have a whole decade to accomplish all of this.”

She puts her paw on This Is My Life.

And starts chewing on the petite pale-pink bow that has held it together all these years.