The century-old glass-front door opens, and there stands Mr. D with Friday, the 77-pound pit bull/pointer bruiser who howled his head off when the bell rang.

“Are you afraid of dogs or kids?”

It’s a moot question; Friday’s nosing around, and the kids — 10-year-old Ian and 6-year-old Willow — are bound to be bounding down the stairs any moment.

James A. DeSoucey Jr. is a squat muscle-bound square with laughing baby blues. The kids he coaches on Willow’s first-grade soccer team, the Panthers, look up to him. They call him Mr. D, and so will we. 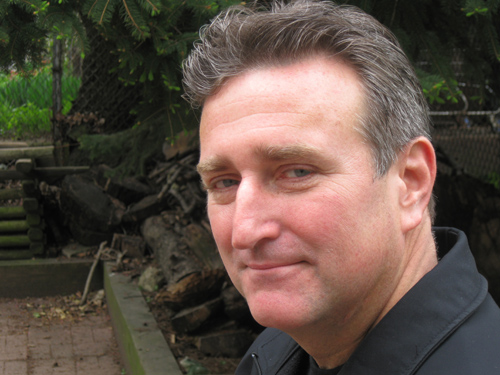 Photo by Nancy A. Ruhling
He’s James, but he goes by Mr. D.

He looks as though he coulda been a boxer. Or a prizefighter. Or at least a contender.

He leads the way to the dining room, where a sleek ebony shelf holds shiny hand-blown vases and the sideboard plays host to a dollhouse and a pump rocket. He sits, and Friday plops down on the floor near his feet. His wife, Patty, decorated the house; he’s proud of her.

Mr. D has been up since 10 to 5; it doesn’t matter what time he goes to bed or what he does before his grey-rimmed head hits the pillow. His eyes always pop open at 10 to 5 to greet the wide, wonderful world.

“I never need an alarm clock,” he says.

Mr. D, who has been all over the world and has stepped foot in every state except Maine, is good at a lot of things. For instance, he cut down the huge dead tree in the back yard, the one whose trunk is a yard wide. 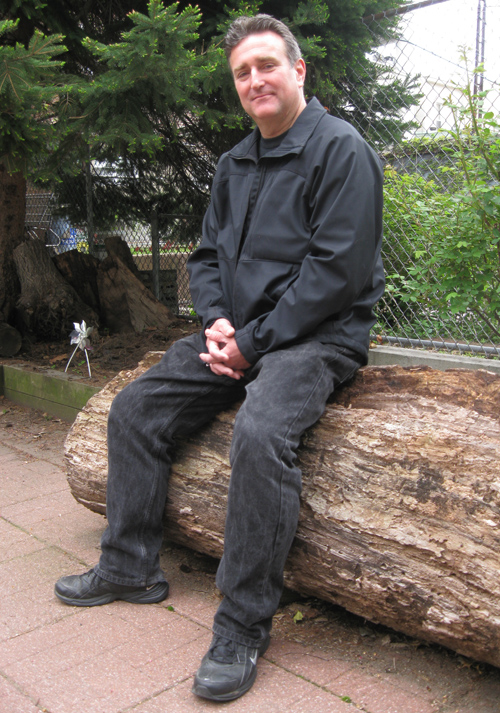 Photo by Nancy A. Ruhling
Mr. D. chopped down the huge tree in his back yard.

What he really excels at, though, is meeting people. Famous people like Peter Max, Salvador Dali and Mike Bloomberg. Just the other day, he stopped LL Cool J in Columbus Circle and asked him to give a talk at his kids’ school.

And ordinary people like the ones in his neighborhood.

“I try to meet a new person every day,” he says. “I’m always telling my kids that they are as cool as anyone else and that they can be president or anything else they want to be and not be shy about saying hello to people. I’ve found that most people, including myself, like to talk, especially about themselves.”

Speaking of which, Mr. D grew up in New Jersey. His father’s people were from Czechoslovakia and France, and his mother’s family tree had Irish, Romanian and Russian roots. 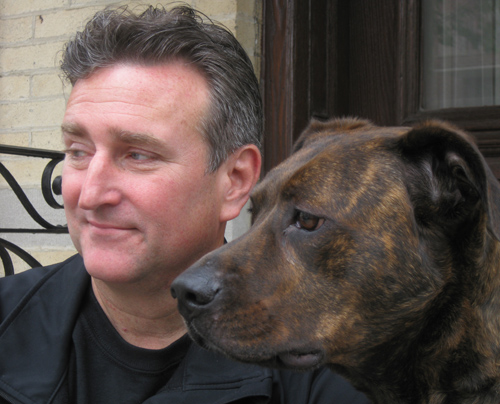 Photo by Nancy A. Ruhling
Mr. D and Friday know virtually every bakery in town.

That’s when he began meeting people, a lot more than one a day. “My dad was a salesman, and he taught me that people usually will explain what they are doing if you are interested,” he says. “My grandfather, who had retired from the NYPD and Schaefer Beer, seemed to know everyone in the Bronx, and they seemed to know him.”

By the way, did Mr. D mention that this house has been in his family since it was built in 1906? His great-grandparents moved here from their East Side Czech neighborhood, where the women were seamstresses.

“My grandmother and my father were born here,” he says. “My wife and I bought it in 1994 shortly after we married.”

But we’re getting way ahead of our story. Mr. D’s parents didn’t have much money, so he had been working since he was 10, running his own paper route and picking tomatoes and cabbages on farms. At 15, he figured he was grown up enough to be out on his own.

He learned to do a variety of jobs, including transporting horses. When it became clear he needed a high school diploma, he worked his way through school. “I lived in a rooming house and hitchhiked to work at restaurants at night,” he says. “That’s how I stayed in food. I graduated before I was 18.” 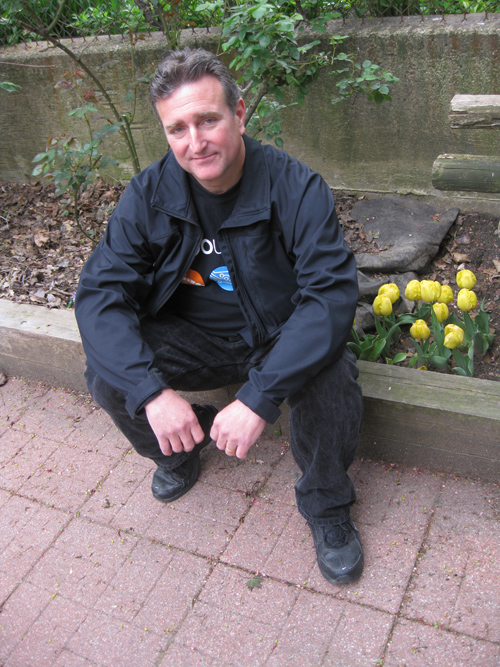 Photo by Nancy A. Ruhling
Every day, Mr. D meets at least one new person.

Oh, there’s something else: Mr. D was a bass player in a punk rock bands that got gigs at Max’s Kansas City, CBGB’s and Studio 10.

“We had terrible names like High Voltage and Blue Fox, and we played loud and horrible music,” he says, wincing. “I wasn’t a singer — I was a screamer.”

After five years working clerk jobs at the New York Daily News, Mr. D became a dockyards deliveryman then set sail as a merchant seaman. “Everything I did up to this time was self-study because I couldn’t afford college,” he says.

During the next dozen years at sea, Mr. D did everything from laying fiber-optic cable across the Pacific to pumping oil. When he was on shore — his shift was four months on ship, two months off — he took college courses, and he landed permanently back on land just in time to finish an associate’s degree in international business at Queensborough Community College.

“I met my wife on a bus in Flushing on the way to class,” he says. “I saw she had the books for the next courses I was thinking of taking and asked whether I could borrow them.”

Eventually, Mr. D became an IT manager, a position he got through meeting one person then another. It started when his sister’s computer broke. He took it to a shop, but instead of paying $95 to get it fixed, he decided to give the repair a try. “Troubleshooting is troubleshooting,” he says, “and I’d done a lot of it during my career.” 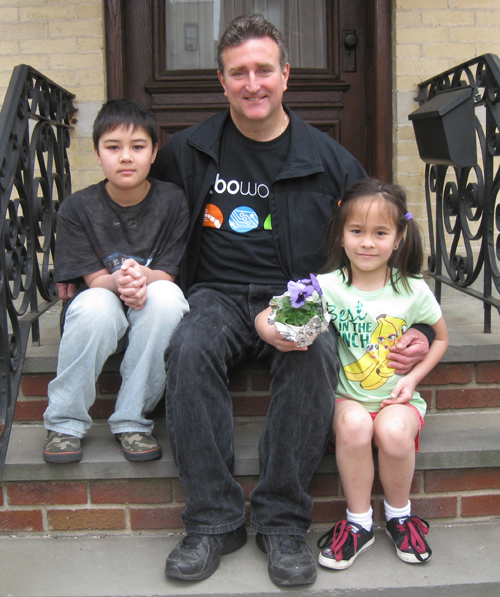 The guys who ran the repair business hired him, and soon he was teaching himself to build servers and networks. He met someone who got him a job at another computer company and through working there, he met a headhunter who got him a job with a company that makes jewelry display cases, where he worked until it closed this year.

He has a lot of things going and offers a different business card for each project. One thing he’s working on is a way to standardize electronic medical records. “I put a retail mentality on the idea,” he says. “I want to bring all the players together to create standardization.”

He coaches the Panthers, Willow’s soccer team, and recently helped her set up a stand to sell flowers. She’s going to put the money in her college fund. 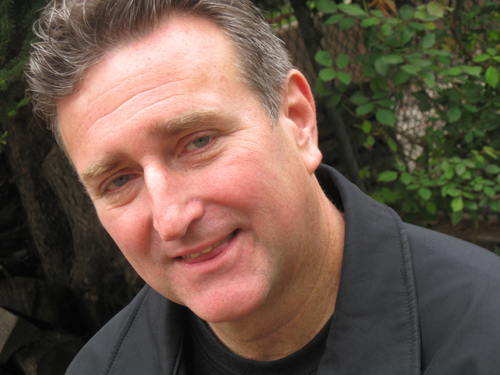 Photo by Nancy A. Ruhling
It’s quite likely you’ll run into Mr. D.

He volunteers with the Catholic Youth Organization and at St. Francis of Assisi School, where, as Mr. D, he talks straight with the kids. “I always tell them: never give up. Someone has to do it, why not us? Complete your schooling. Always try a second time — look at me.”

And he walks Friday every morning. “Our mission is to find all the bakeries in a two-mile radius,” he says. “We share a roll.”

And one thing leads to another.