Every day, Jim Pignetti sees the past in the present. He can’t help but be reminded of the way things were because his business, Metalmen, is only four and a half blocks from the house he grew up in.

He and his older brother lived there with their parents, their uncle and their maternal grandparents, who had come over from Sicily.

The backyard garden had fig trees and a grapevine, and Jim used to deliver newspapers to the business at Metalmen’s address.

He played Johnny Rides a Pony in the streets with his pals and ran across garage roofs like a gazelle. 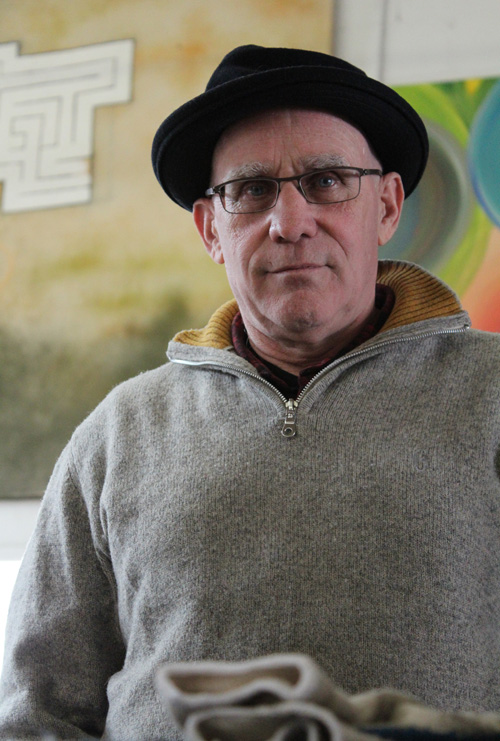 Photo by Nancy A. Ruhling
Jim, a poet who evokes the past.

“It was rough-and-tumble,” says Jim, whose close-cropped fringe of white hair shouts Marine sergeant. “We were pretty wild.”

Jim’s steely blue eyes, hooded by bushy brows the color of milk, look as though they’re seeing all this for the first time.

But the streets weren’t Jim’s best teacher; he learned a lot about life in his father’s candy store. Pete’s, as it was called, had a jukebox, a soda fountain, a newsstand, a bank of phone booths and some of the coolest kids in the neighborhood. 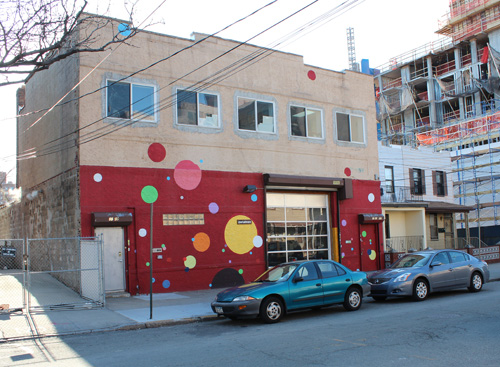 Photo by Nancy A. Ruhling
The Metalmen building is the sculpture of the street.

It was the 1960s, and the country was caught between “I Wanna Hold Your Hand” and “I Have a Dream.” Jim was along for the bumpy ride, just trying to figure the future out.

His family wanted him to be an authentic American, so he never learned the Sicilian they spoke at home.

“It’s a terrible loss for me,” he says. “But I became very particular in the way I use English. I’m a powerful English speaker, and that has helped me in my sales career.” 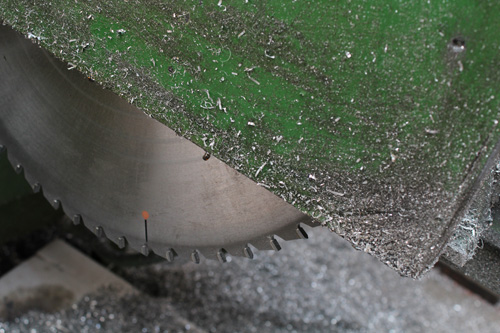 Photo by Nancy A. Ruhling
The saw blade that cuts the steel.

Jim has the diction of a classic stage actor, and he chooses his words as carefully as if he’s picking them out of a minefield. When he sees a photo of himself, he comments that he’s not “comfortable with my countenance.”

His business clients know him as Jim Netti, not Jim Pignetti. He shortened his surname because so many of them weren’t pronouncing it properly, and the harsh sound grated on his ears.

It was against the backdrop of beehive hairdos and Vietnam War body bags; doo-wop and drug overdoses; and civil-rights protests and souped-up cars, that Jim met “a bizarre carnival of people” at Pete’s that he’s never been able to erase from his mind. 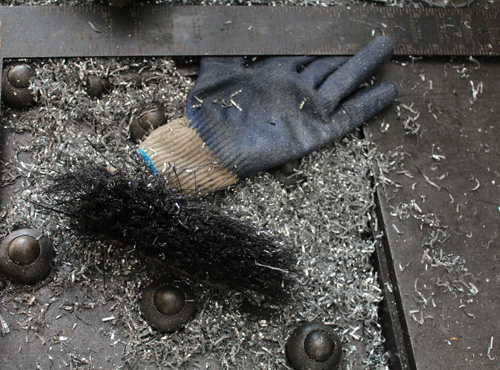 Photo by Nancy A. Ruhling
The steel shavings look like Christmas tree tinsel.

Being the son of Pete’s owner gave Jim a certain cache that was akin to royalty. When it closed in the late 1960s, he was crushed.

“It was a tragedy for me,” he says. “My father had to take a job as a moving man; he was gone for weeks, sometimes months at a time.”

“That’s when I started to draw,” Jim says. “I saw art as a way to deal with my emotions and express myself. I also saw it as an alternative to the bad behavior and violence of some of the other kids in the neighborhood.” 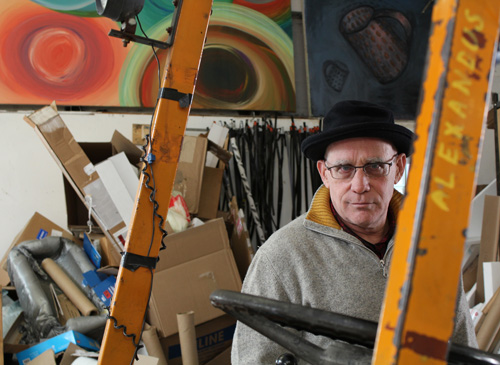 Photo by Nancy A. Ruhling
In Jim’s workshop, art and commerce merge.

He started hanging out with a bunch of creative types by Queensview. “In my community, creativity was suspect,” he says. “We used to meet at 34th Avenue and 21st Street — we called this The Corner. I found a home there.”

“It was mind-bending,” he says. “I decided to get a degree from the school. My family was mute when I told them; there was no celebration of this accomplishment. They didn’t really understand the significance of this.” 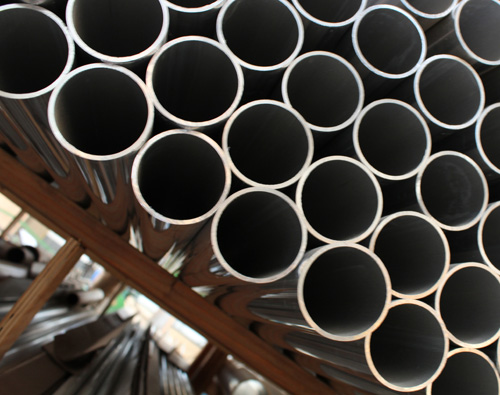 Photo by Nancy A. Ruhling
Piles of pipes awaiting shipment.

For four years, Jim studied “the idealism of art and the power of truth and beauty.” But he didn’t know how to make his love of art a career.

When several of his professors bought Soho lofts and needed help renovating them, Jim joined a group of his classmates and became a go-to guy, what he calls an “art rat,” then an art assistant who did tasks like stretching canvases.

That evolved into house painting. “I was comfortable with manual labor because I come from a working-class family,” he says. “I never was comfortable in the art world, and it didn’t look like I was going to be an artist.” 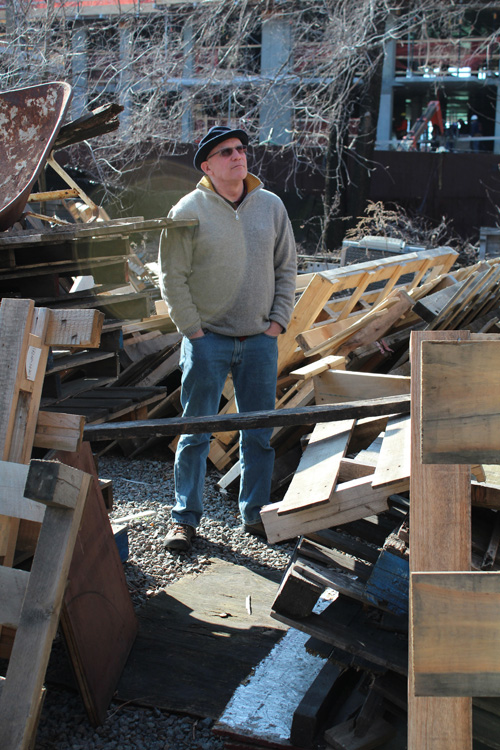 Photo by Nancy A. Ruhling
A view of the back yard, where packing material meets sky.

He married a girl he knew from high school, and when she was pregnant with the first of their two daughters, Jim decided he needed a more steady occupation.

For a year, he was a toll taker on the Whitestone Bridge, a job he detested, and eventually he set up a metal-supply business that led to the establishment of Metalmen in 1986.

As his children and his business grew, Jim dabbled in the arts; he went through a period when he painted, and when he moved Metalmen to Astoria seven years ago, he started writing poetry about the old days. 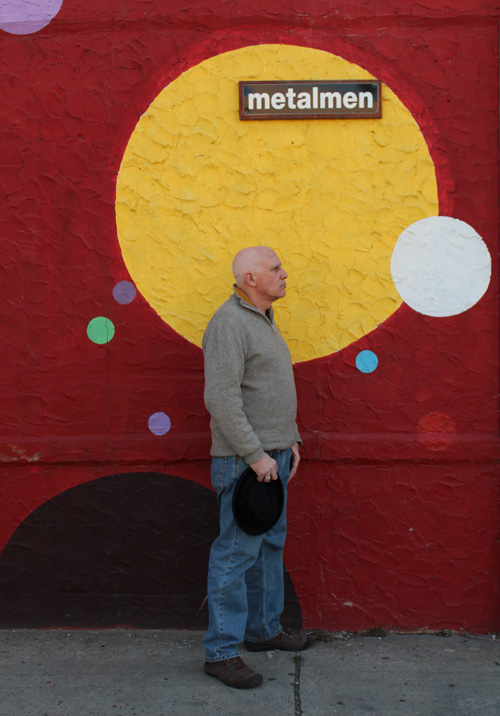 Photo by Nancy A. Ruhling
Jim as Metal Man.

“No one was telling the story of this community,” he says. “My role is to tell it.”

Yes, Jim’s a businessman, but he prefers to describe himself as a “creative problem solver in specialty metal.” He emphasizes the word “creative.”

“The reason I’m a successful businessman is because I do this creatively,” he says. “This was a marketplace with no creativity.” 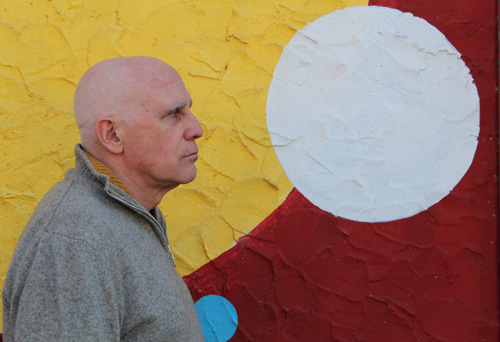 Photo by Nancy A. Ruhling
Jim, a portrait in concrete.

The creativity starts at the curb: Metalmen, painted bright red and decorated with bubble-like circles of color, looks like a piece of contemporary sculpture. Inside, the forklifts and metal pipes form a backdrop for oil paintings. (More photos.)

Jim did the one that looks like a maze. Another one was done by his ex-doorman, the one who didn’t understand art until he met Jim. He painted it in Jim’s apartment. Since then, he’s moved to Tennessee, where his work was exhibited in a museum alongside Goya’s.

The back yard is filled with metal sculptures created by the building’s artist in residence. Another artist, the one who helps Jim paint the Metalmen circles, lives upstairs. 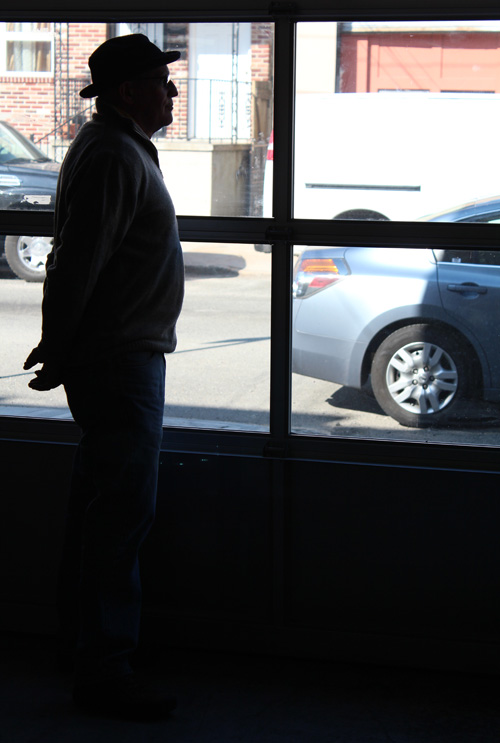 Photo by Nancy A. Ruhling
Jim looks toward the future.

At 59, Jim’s not sure what his next act will be. He has property upstate, and he’s added a vineyard. Did he mention that he got married under the grapevine at his childhood home? He’s been making wine for the last couple of years. It might be interesting, he says, to live up there and come into the office only three days a week.

Yes, he says, that might be the perfect creative solution.