It’s noon when Catherine and Frank Terrizzi walk through the front door of Terrizzi Pastry Shop.

They’re not here every day any more, but they can be counted upon to appear every Saturday at this time.

They are the closest thing the shop has to royalty. Catherine’s the Grande Dame of Desserts. Frank’s the Maestro of Marzipan.

Catherine, whose blond bouffant of bygone days swirls around her head like cotton candy, runs up to the counter girl and greets her with an affectionate peck on the cheek. 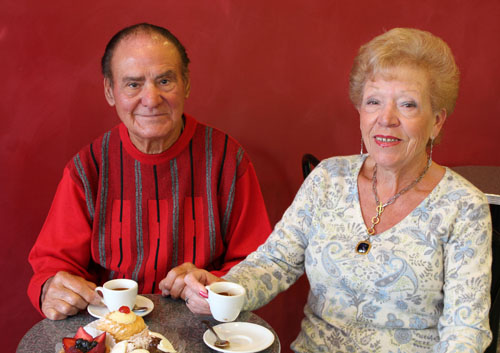 Photo by Nancy A. Ruhling
Frank and Catherine at their table.

Frank, whose strong hands have been kneaded by time, heads back to the kitchen, where a baker is applying stars of pale-pink frosting to a two-tier baby-shower cake.

Terrizzi, which opened in 1964, is now owned by Catherine and Frank’s son, Michael, but it still belongs to their hearts.

Catherine, 74, and Frank, 85, have been married for 58 years, but it seems as though they have been sweethearts forever. They were neighbors in Messina, Italy, where Frank’s grandfather owned a pasticceria much like Terrizzi. 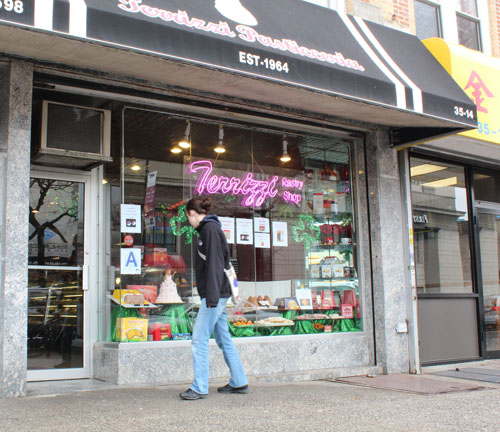 Photo by Nancy A. Ruhling
For nearly a half century, Terrizzi has been a fixture on 30th Avenue.

Frank started working there when he was 10.

“My grandfather woke me up in the middle of the night — it was 2 a.m. — and took me to watch him make bread,” he says. “I went there with my eyes still closed. Every morning I went to school, and every afternoon I made pastry.”

Catherine came to work at the bakery while Frank was serving his country on a 14-month stint of mandatory military duty. 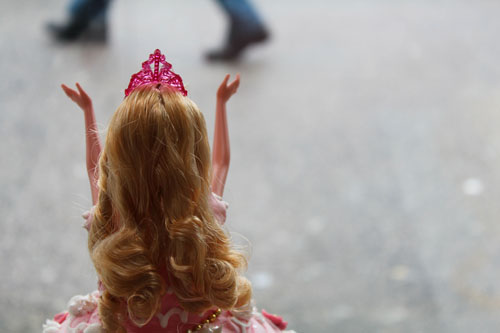 Photo by Nancy A. Ruhling
A doll atop a cake opens her arms in welcome.

“I saw her putting cherries on the almond cookies, and that was it,” Frank says.

Catherine sighs. “At that time, I was a pretty girl,” she says. “I had long hair.” 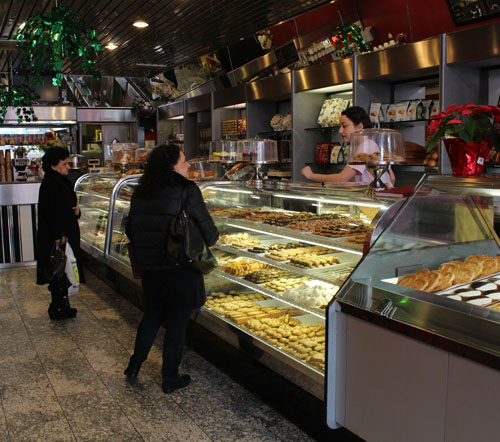 “We had no choice,” Catherine says. “Nobody in our families would OK the marriage because of the age difference, and our families really didn’t get along.”

Frank runs his fingers across the bistro table to illustrate the haste of their flight.

Two years later, they went to Caracas, Venezuela, where Frank eventually opened a pastry shop that catered to the city’s large Italian population. 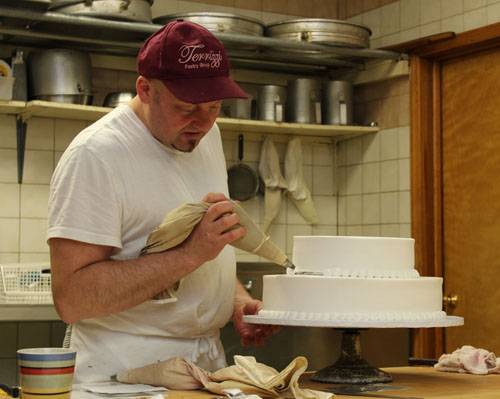 Photo by Nancy A. Ruhling
Jack Catinella ices a cake for a baby shower.

“It was a 19-day boat trip there,” Catherine says. “It was a nightmare. I was all alone. Frank had gone before me. My daughter was only 7 months old, and I was seasick for the entire trip.”

Their next stop, five years later, was Astoria, where Frank landed a job with La Guli Pastry Shop before he opened Terrizzi on 30th Avenue, next door to the spot it has occupied for decades.

At Terrizzi, Michael and his older sister were always on hand to help out. It has hard work; the bakery was open 7 a.m. to 9 p.m. seven days a week. Frank always opened up, and Catherine joined him at 11 a.m. At 6 p.m., she went home to cook dinner, and after they ate, Frank came back and worked until closing. 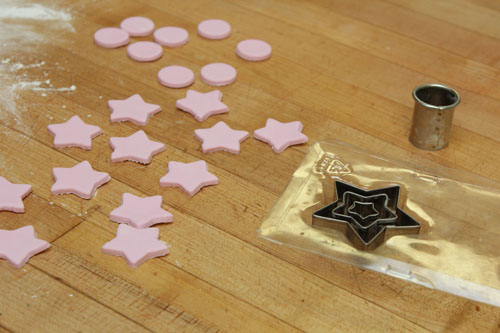 Photo by Nancy A. Ruhling
Pale pinks stars wait to be put on a theme cake.

They were successful enough to buy the building Terrizzi is in and to open a second bakery, D’Aquila Pastry Shop in Bayside, which their daughter owns.

“Frank taught our son-in-law the business,” Catherine says. “He was a very quick learner, and the shop has been very successful.”

Six years ago, Catherine and Frank decided that it was time to let someone else make the cookies and cakes. They longed to do the little things they’d never done before like go on vacation. Michael had a successful career in sales and wasn’t interested in running it. 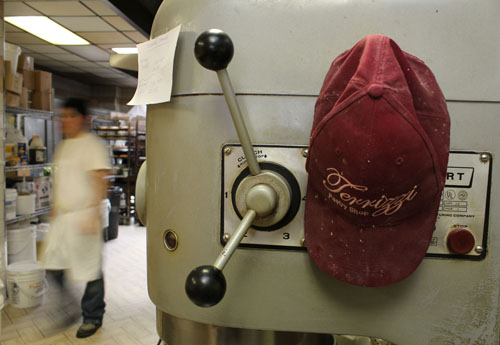 Photo by Nancy A. Ruhling
The bakery’s kitchen is all sugar and spice.

They sold the bakery, and three years ago, when it went out of business, Michael stepped in and revived it.

Since then, Catherine and Frank have been fixtures at Terrizzi.

“We came back because we wanted to help out,” Catherine says. 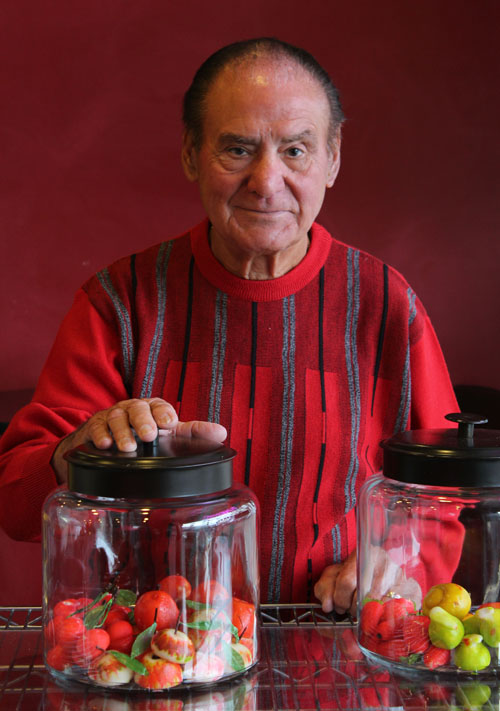 Photo by Nancy A. Ruhling
Frank’s marzipan is made from a secret recipe.

Terrizzi’s Italian pastries, including the cookies, cassatini. cannolis and sfogliatelle, are made from recipes that are nearly 150 years old.

“I got them from my grandfather, and he got them from his people,” Frank says. “We’re the only bakery in Astoria that makes its own marzipan fruits and Easter lambs.”

Michael doesn’t know how to make the marzipan; he has the secret recipe on his computer, of course, but Frank likes to do it himself.

New recipes constantly are being tried out. The bakery, which specializes in theme cakes, recently added chocolate truffles to its fare. On the weekends, it serves rice balls the size of croquet balls and focaccia accented with hearty tomato chunks and fresh basil leaves. 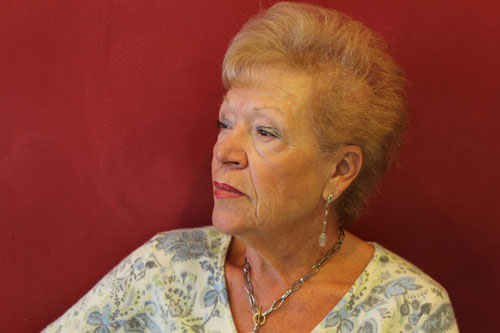 Photo by Nancy A. Ruhling
In Astoria, Catherine has celebrity status.

Sure, Catherine and Frank could be happy doing other things. They could travel, they could spend more time with their three grandchildren, heck, they could even sleep in a couple of days a month. But they wouldn’t dream of deserting Terrizzi.

“I love meeting all the people,” Catherine says as she steps behind the counter. “Everywhere I go, people know who I am, and the staff are like my own kids. Some of them who grew up working at Terrizzi still call me on my birthday and holidays.”

Next week, Frank will make a fresh batch of his famous marzipan. He can’t wait.