In a squeezed-in space the size of an SUV’s backseat, Lou Farina is perched on an ancient chair manning the phone.

“It’s the red, white and blue building on the corner,” he tells a customer. “You can’t miss it.” 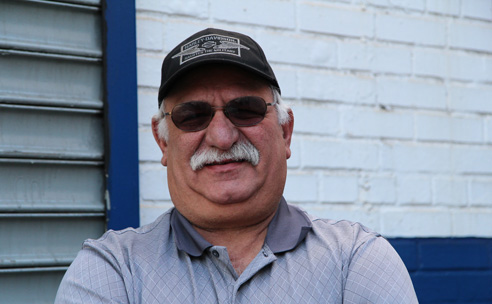 Photo by Nancy A. Ruhling
Lou’s the owner of L&M Auto Service.

It ain’t a fancy place. Lou knows it’s a real joint, but it’s his joint, so that makes it OK. 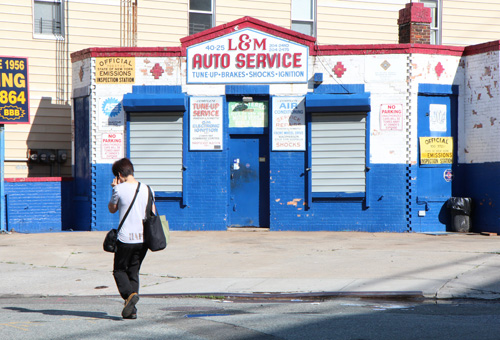 Photo by Nancy A. Ruhling
The star-spangled L&M, on Astoria Boulevard at 40th Street.

When Lou took over L&M some three decades ago, it looked pretty much the same. The guy he bought it from — Popeye-armed Walter — hadn’t made many changes either, which is how it came to get its antique patina.

Lou has always had an affinity and affection for the automobile, so it was natural that he should end up owning L&M. Lou’s no braggart: The name — L&M — isn’t his initials; it stands for Lisa & Mike, his two great kids. 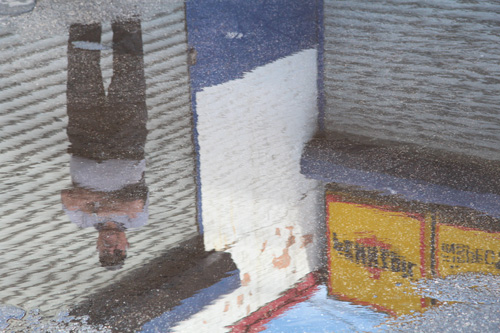 Photo by Nancy A. Ruhling
Lou reflects on his reflection.

Anyway, Lou grew up in Astoria tinkering with hot rods back in the days, he says, “when all you needed to fix a car was a screwdriver and a crescent wrench.”

You think he learned anything about cars in the classroom? No way. Lou was too smart for books; that’s what he told his dad when he quit high school.

God, he was such a stubborn kid. And selfish, too. Don’t take my word for it; take Lou’s. 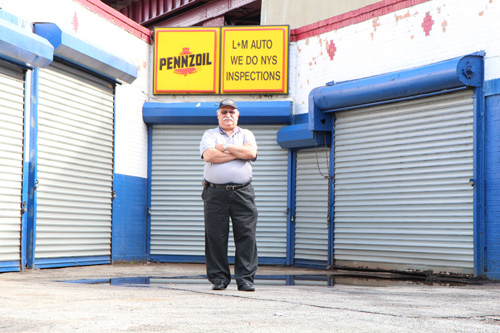 Photo by Nancy A. Ruhling
Lou took over the shop in 1982.

Lou’s dad used to work two jobs to support the family, and it was Lou’s job to go straight from school to the family dry cleaners to take over while his mother went home to make dinner. Lou stayed there until his father got back from his day job in Manhattan. Later, Lou was sent back to drop off his dad’s supper.

“He died young, when I was only 18,” Lou says. “I was a kid; I didn’t know the sacrifices he was making, and I didn’t like bringing him dinner, but at least I never said anything.” 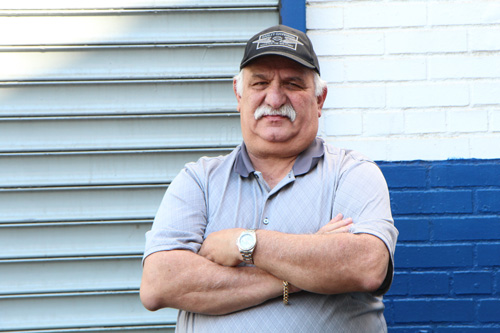 Photo by Nancy A. Ruhling
Lou has been working on cars since he was a teenager.

Big guys don’t cry, and Lou’s a really big guy with a white walrus mustache and a ferocious frown. He tries to fight the tears, but it’s no use: He’s melting like a Hershey bar in a heat wave.

Lou’s guilt and grief go far beyond those dinners.

“My dad made me enlist in the army,” he says. “By doing this, he saved my life. It was the time of Vietnam, and my friends were being drafted. I was supposed to go to Vietnam, but when my dad got cancer, I got a transfer to New Jersey and never saw battle.”

After Lou got out of the army, he married his neighborhood sweetheart, the one he met when she was 12. 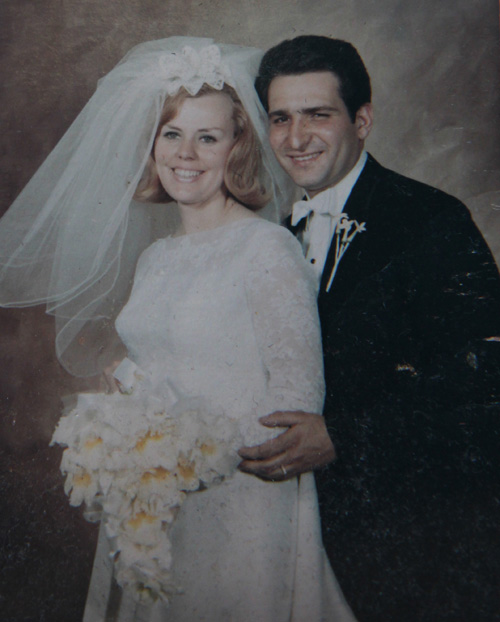 Photo by Nancy A. Ruhling
Lou on his wedding day in 1968.

Lou tried a couple of jobs, but by 1972, he was working for Walter at the auto shop. After he bought a house in Shirley — “that was the biggest mistake of my life, the commute was hours long, I put it up for sale right away, but it took eight years to get rid of it” — he took a closer-to-home job in Elmont.

In 1980, finally free of the Shirley albatross, he went back to work for Walter, and in 1982, he became the shop’s owner.

“I’d never run a business before, and I was scared to death,” he says. 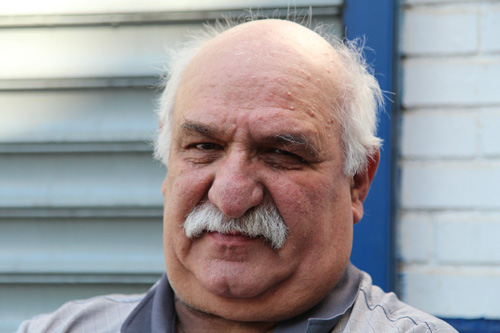 Photo by Nancy A. Ruhling
When he’s not working, he’s on the golf course.

He needn’t have been. The customers and their cars kept coming back because they loved Lou, and through the years he’s gotten pretty picky about whose vehicles he pops the hood on.

“I have the kind of customers who trust me,” he says. “If you’re working in Manhattan and I can’t reach you and you need a new fan belt, I’ll just put it in, and my customers say ‘thank you,’ not ‘why did you do that?'” 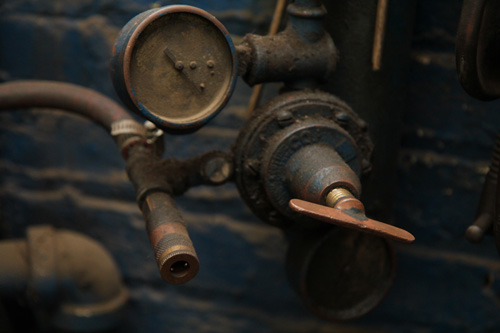 Photo by Nancy A. Ruhling
L&M is shrouded in the dust of time.

That reminds him of the woman whose 6-year-old son locked himself in her car when she brought it in for service. The kid thought it was a joke, wouldn’t open the doors until she yelled at him. She came in a couple of weeks ago to tell Lou that her son is expecting his first child. Lou wonders whether the new kid will pull the same trick.

Lou worked six days a week until about 10 years ago, when he started shuttering the shop on Saturdays and Sundays.

“I’m addicted to golf,” he says. “And I have three young grandsons. They have changed everything.” 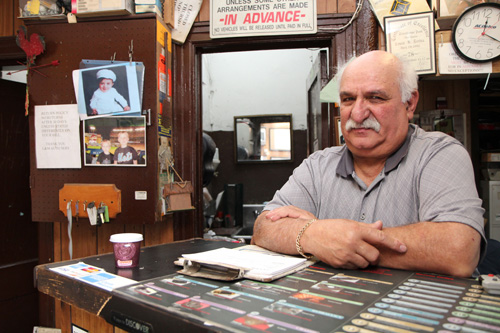 Photo by Nancy A. Ruhling
Lou at his station.

At 68, what hasn’t changed is Lou’s enthusiasm for L&M. He may not be able to work on cars any more — two artificial hips and two shoulder surgeries have clogged his engine — but he can’t see himself in the retirement seat.

“Even if I sold the business, I’d still hang around here,” he says.

But Lou’s making changes. For the first time in 30 years, he’s taking a short vacation. He’s not sure how he’ll do, but he’s willing to give relaxation a spin around the block. The place will still be here when he gets back. 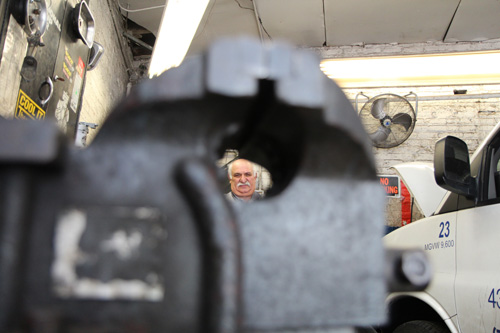 Photo by Nancy A. Ruhling
Retirement isn’t down the road.

He rips off a piece of peeling paint from L&M’s bricks and holds it in his hand. It’s not just any old blue, he says, it’s true-blue American blue.

He’s hired someone to repaint the building. Don’t worry. Lou’s sticking with the red, white and blue.