There ought to be a sign that says, “Watch your head.” Instead, what you see straight in front of you — before you see stars — when you enter Bill Conroy Lindsay‘s subterranean shotgun-style studio are these words: Gay Ahead.

Before you get the joke, you realize that there’s no wiggle room in Bill’s squiggle space. The walls in his white-rabbit hole are lined with heating pipes and paintings that showcase his signature squiggles — life lines that twist and turn and circle around themselves with no beginning or end. 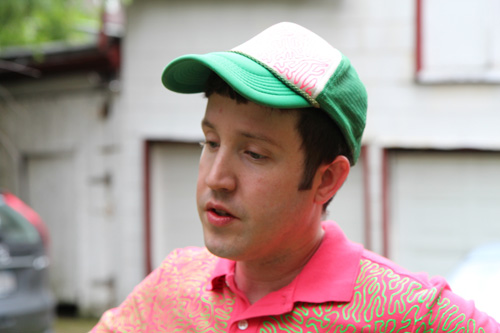 Photo by Nancy A. Ruhling
Bill has always been a squiggler.

Bill, a cord who has child cheeks and a Beatles bob, has been squiggling ever since he was old enough to let pen penetrate paper. There wasn’t much room to go out of the lines where he grew up, in Merrimack, New Hampshire, but his parents did encourage Bill and their other five children to cultivate their creativity.

“I was always drawing objects like my sneakers,” Bill says. “The act let me be in my own little world, and it took me away from the normal world. Drawing gave me the feeling of butterflies in my stomach.” 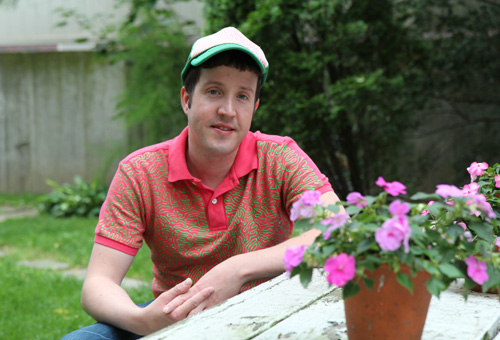 Photo by Nancy A. Ruhling
Bill sees art in squiggles.

Bill colored his way through school, but he also was interested in acting. He played out his passion for music on the piano. When it came time for college, he started working on a degree in theater.

“But I never got away from drawing,” he says. “I kept my love for art.”

That enthusiasm brought him to New York City, where he earned a bachelor’s degree in graphic design from the School of Visual Arts. 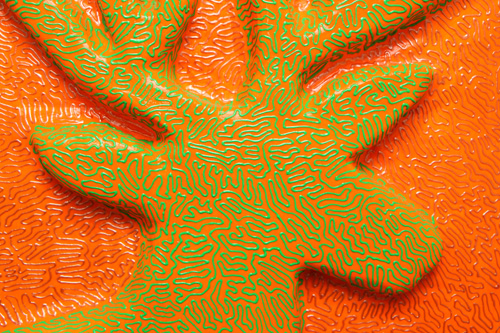 Photo by Nancy A. Ruhling
One of Bill’s sculptural squiggles.

“While I was there, I enhanced the squiggle,” he says. “My thesis was based on how to brand the design.”

For Bill, squiggling sprang spontaneously; the patterns gushed from his pen like an erupting oil well. He didn’t think about the lines, they just came — when he was bored, when he was interested, whenever and wherever he was. 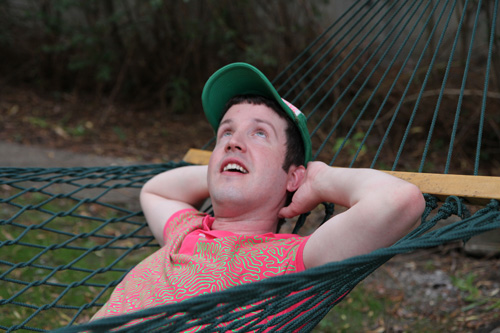 Photo by Nancy A. Ruhling
Bill relaxing between squiggles.

“It was very relaxing,” he says.

Squiggling, as Bill came to call it, continued to fill in his idle time. It gave him a reprieve from his work creating window displays for the likes of Bloomingdale’s and Bergdorf Goodman.

One day, his squiggles, which spring from the street art of Keith Haring and Jean-Michel Basquiat, spiraled off their paper, sprinting onto canvases then T-shirts, trucker hats and ties. 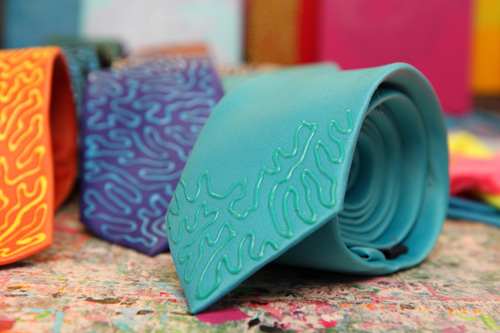 Photo by Nancy A. Ruhling
Ties from Bill’s fashion line.

Soon, they were scampering onto Christmas ornaments, lamp shades, cocktail glasses and chairs. Some with swollen heads even sauntered onto a baby grand piano. Before Bill could stop them, scads of snow-white squiggles scurried onto his midnight blue 1995 Ford Probe.

“The Squig Mobile attracts a lot of attention,” Bill says. “People like to take pictures of it.” 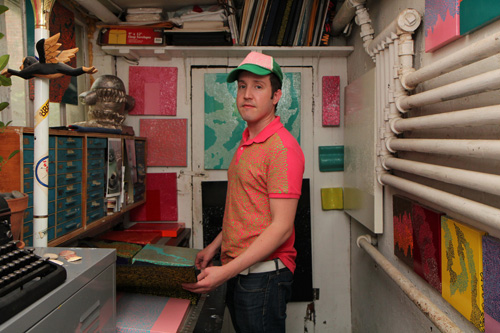 Photo by Nancy A. Ruhling
Bill in his squiggle studio.

In light of these escalating escapades, Bill decided to let the squiggles have their way.

“I do them all by hand,” he says. “I like to pick bright colors. It’s very labor intensive. It takes me about an hour to cover a shirt. I worked on the Squig Mobile off and on for six years before it was covered.” 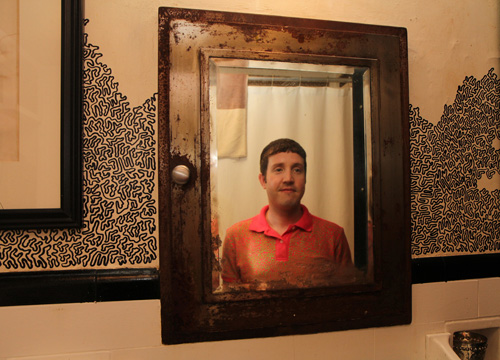 Photo by Nancy A. Ruhling
Bill painted a squiggle wave in the bathroom.

Bill’s squiggles are creatures of the night. That’s a good thing because he has a day job at a menswear store in Manhattan, which he says is great fun. He likes retail, but the squiggles have other ideas.

The squiggles in his paintings and sculptures, which have been exhibited in galleries and shows, have turned him into a minor celebrity. And his squiggling has caused such a sensation that he’s selling his retail line on Etsy and metro-area flea markets.

The squiggles don’t allow Bill to have a linear thought in his head, which, thank goodness, he usually remembers to duck at the studio door. Still, he’s well aware that his future isn’t set in squiggles. 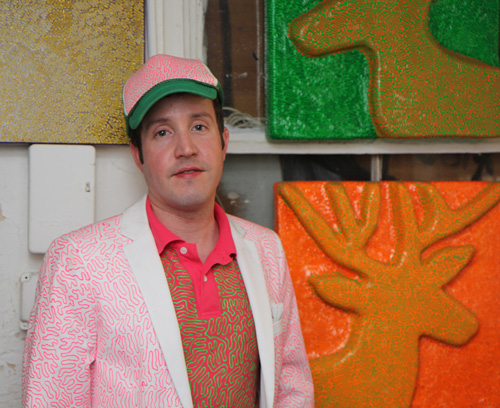 Photo by Nancy A. Ruhling
Bill in his squiggle wardrobe.

Lately, the squiggles have been hinting that they’d like to outline and outfit an entire room.

“I want people to experience the squiggles in a different environment,” he says. “By putting them on everything from the floor and the walls to the coffee table and TV set, I’ll give people a chance to feel their Zen.” 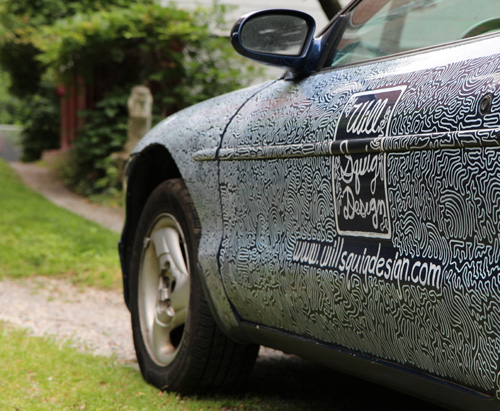 Photo by Nancy A. Ruhling
The Squig Mobile awaits.

His next project, however, is likely to revolve around Zen and the art of automobile maintenance. The Squig Mobile, which he bought used a decade ago, has hit the 197,000-mile mark. And no matter how much he feeds it fresh oil, he knows its long-distance days are numbered.

“I hate to part with it,” he says. “But when I do, I’ll get another and cover it with squiggles.”

Then all he has to do is sit in the driver’s seat and see where his curved lines lead him.