On the back patio, on the way to the garden, there’s a bowl filled with cat food. Joan Garrison started setting it out for the strays when her own brood, Thelma, Louise and Neeky, got picky.

“It was too expensive to throw away,” she says.

She never could bring herself to stop feeding the fancy-free felines, and before she knew it, she had “grandkids” padding through her roses. 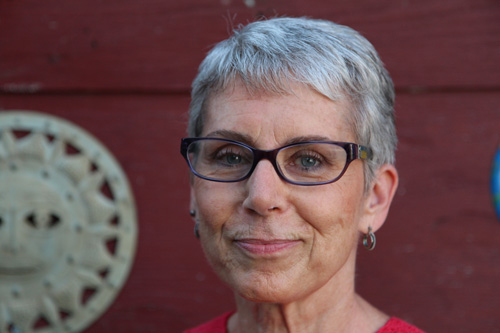 Photo by Nancy A. Ruhling
Joan’s family was in the jet-set crowd.

She’s done all right by the garden. When she moved into this house in the late 1990s, she took it under her wing, throwing sentimentality — some of the plants had been there for decades — to the wind. 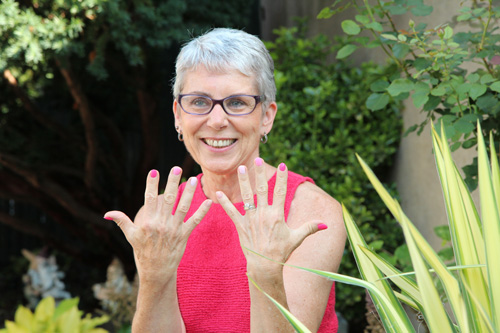 Joan’s version of simple is showy. With her short silver hair, raspberry shell, purple eyeglasses, red flip-flops and fingernails painted in various shades of pinks to look like the Pantone chart, she’s the most exotic bloom in the garden.

Gardening is only one of the things Joan does to keep busy. She also knits like a fiend — she made the raspberry shell she’s wearing — and she’s taking a shoe-making class. Although she officially retired five years ago, she finds that she keeps going back to work. The cat food and yarn costs add up.

These are pretty pedestrian pastimes for a woman who had the globe at her feet. Hers was a glamorous childhood. Her father was excessively successful, and the family lived abroad, first in Holland then Italy. 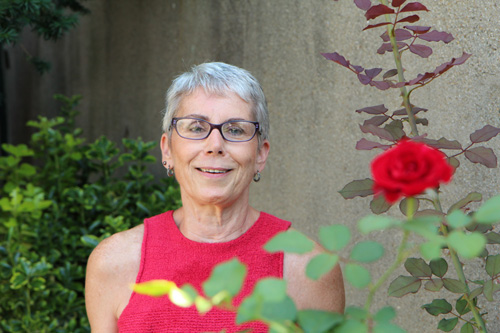 Photo by Nancy A. Ruhling
She’s particularly proud of her garden.

Joan and her three siblings had nannies and chauffeurs. They danced on TV and sailed in a sloop. In grade school, Joan went steady with Liz Taylor’s son.

“My father was never home,” she says. “I thought that was normal.”

One thing led to another, and before Joan knew it, the money and her father were gone. 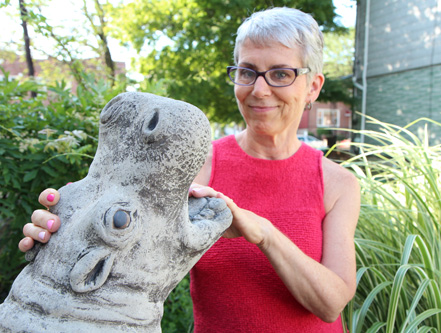 Photo by Nancy A. Ruhling
Joan with Oscar, one of the many hippos in her collection.

“He lost the business,” she says, “and he married a younger woman. My mother sold off our antique furniture to pay off his debts and sold enough jewelry to get me through one year of college. I cleaned house for the college president.”

It was around this time that Joan stopped eating. Soon, she was balancing her anorexia with bulimia.

“I looked like a butterball,” she says as she sips ice water. “I was a laxative abuser. It took over my life.”

Her exciting life in Europe taught Joan many things but not what she wanted to do for the rest of it. 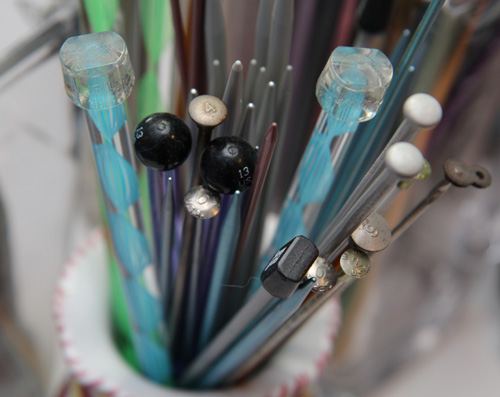 Photo by Nancy A. Ruhling
Joan has hundreds of knitting needles.

“I thought about being a stewardess, but I was too short to make the cut,” she says. “I had always been a student of languages, and I saw myself being an interpreter for the UN.”

She ended up in secretarial school. “I loved typing and shorthand,” she says.

In her role as executive secretary, she held jobs in Houston, Paris, Beirut (she didn’t last long; the machine gun fire of the war sent her running home) and Athens. 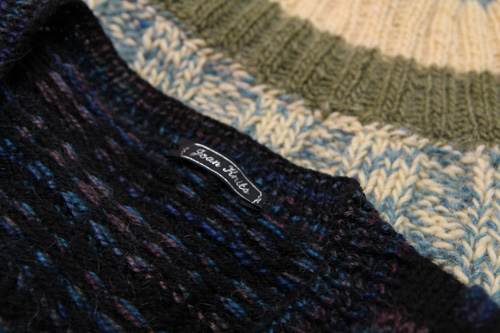 Photo by Nancy A. Ruhling
Sweaters with her label.

Therapy and Overeaters Anonymous saved her waistline and her life.

“From my 30s on, I’ve been on a path of self-discovery,” she says. “When I look back at all of this, if feels like it happened to somebody else in another lifetime.”

With her new self-esteem tucked under arm, she headed back to corporate life, holding a succession of high-profile jobs in Manhattan. When she wanted to keep herself busy, she knitted. She was pretty much satisfied with her life when, one weekend, she walked into Astoria Bagel Shop and Deli on Ditmars Boulevard.

In line, there was a big, burly guy in a cowboy hat and leather jacket. He flirted with her. “His blue eyes looked into mine to the soles of my feet,” she says. She flirted back. 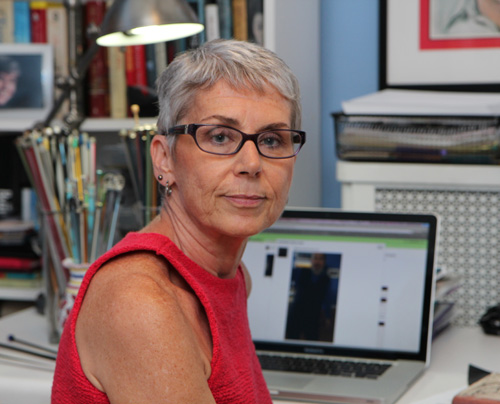 Photo by Nancy A. Ruhling
She’s ready to work again.

Thus began what you would call a real long-term relationship. They dated back and forth and even broke up for two years. Her guy, it turns out, was allergic to the M word.

Finally, seven years later, they moved in together.

“I never brought up marriage,” she says, “but I suspected he was ready to propose. So I asked him about it, and he said he couldn’t because the jewelry store he went to went out of business.”

Joan rolls her big, blue eyes; she looks really cute when she does this. She carefully explained to him that there were other jewelry stores, and she dragged him to one. She proffers her hand: There’s a big diamond on her wedding-ring finger and a huge smile on her face. 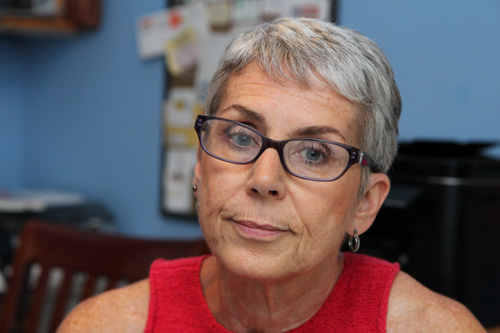 Photo by Nancy A. Ruhling
Her journey of self-discovery continues.

When Joan left the corporate world, she decided it was time to work in the nonprofit sector. She had just taken a job with the National Audubon Society when she was diagnosed with breast cancer. Since the mastectomy, she hasn’t been back to work.

“I don’t know what’s next,” she says. “But I want to do something meaningful.”