There’s a matched pair of elephants on Yogi Lala’s front sign. You can’t miss them because each one is balancing a diamond the size of the Ritz on the end of its upturned trunk.

This is not an easy thing for an elephant to do, especially while rearing up on its hind legs.

And it’s not an easy thing to keep a business going for 35 years, yet that is exactly what jeweler Larry Lakhati has managed to do.

Larry, a distinguished fellow with a white mustache and just enough jewelry, is from India, the land of elephants and diamonds. Actually, the city of his birth, Hyderabad, is presently part of Pakistan. 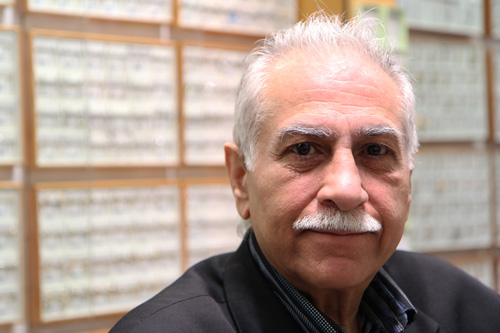 Photo by Nancy A. Ruhling
Larry opened Yogi Lala in 1978.

That’s why in 1947, when Larry was 7, his rather well-to-do family moved back to India, settling in Baroda. That’s where Larry and his five brothers and four sisters grew up, and that’s where Larry stayed until he came to America.

He had owned a couple of companies before immigrating to New York City to work in his cousin’s jewelry business. His wife, Meena, followed him a year later. It took him eight years to work up to opening Yogi Lala in 1978, and when his two children reached school age, Meena joined him behind the glass counters. 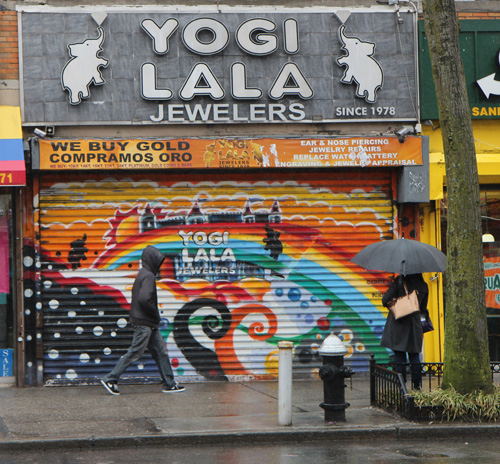 Photo by Nancy A. Ruhling
Caine 1 painted the mural on the security gate in the ’80s.

“I wanted to bring some change to Steinway Street,” he says. “There were four or five old-fashioned jewelry stores here, and I said to myself, ‘Let me be different so I appeal to the young generation.'”

The young generation didn’t trust anyone over 30, and Larry was 38. But he still had enough kid in him to know what the real kids were into. 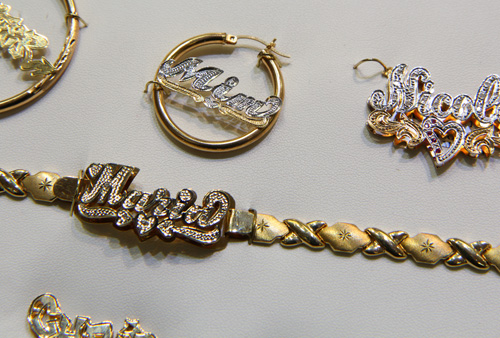 Photo by Nancy A. Ruhling
Graffiti jewelry is one of Yogi Lala’s specialties.

Larry’s given name is Lal, but nobody in Astoria (or America for that matter) ever got it right, so he named the shop Lala, and people started calling him Larry, which is what his big bling ring spells out in diamonds. Yogi, well, that was for Yankees Hall of Famer Yogi Berra.

“And the word ‘yogi’ also brought a scent of India to the store,” he says. 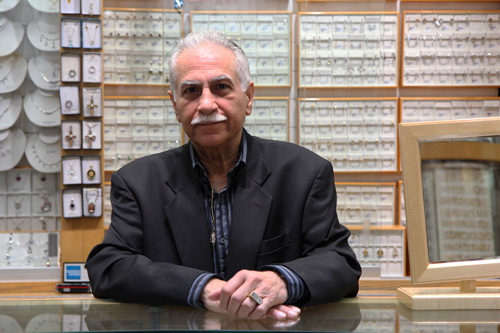 Photo by Nancy A. Ruhling
Larry kept changing the shop with the times.

In addition to jewelry, the store that specialized in ear and nose piercings carried garments from India, groovy T-shirts, leather jackets and rock and roll posters.

“There was nothing like me in all of New York,” Larry says. “In those days, there were only four or five stations on TV, and there was a movie house down the street, so kids would stop in here on their way there.” 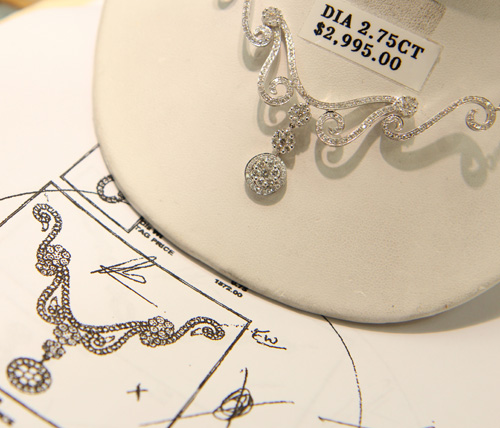 Photo by Nancy A. Ruhling
Larry and his son, J.T., design custom pieces.

By the 1980s, Larry had spotted another under-the-radar trend and started selling gold graffiti-style nameplates and rings; they still are popular items. It was in that era that the graffiti artist Caine 1 painted the psychedelic rainbow and elephants on the store’s security gate. 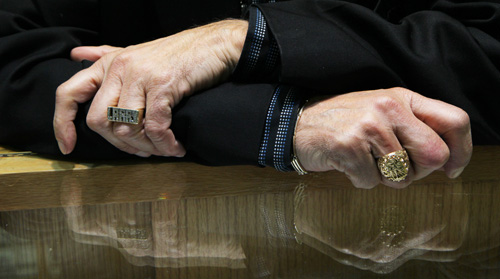 Photo by Nancy A. Ruhling
If customers forget Larry’s name, they can look at his ring.

But all things must pass, and by 2001, Larry had reinvented Yogi Lala: It became and has remained a jewelry-only shop specializing in custom creations. There are circular-shaped origami-like diamond earrings that unfold to become dangling dazzlers and “reversible” rings whose center stones flip for two different looks.

For a while now, Larry’s son, J.T., has been a fixture at the store, but it is Larry, 72, who can’t and won’t ever leave. He’s at his station behind the counter seven days a week. (Meena has reduced her schedule to three to four days.)

He lives around the corner; he figures there’s no excuse for being absent. The word retirement isn’t in his future, and he aims to keep it that way. That’s why he works out four times a week.

“Jewelry is my hobby,” he says. “People expect new things every day, and we are like magicians. Like Houdini, we always have to come up with new tricks.” 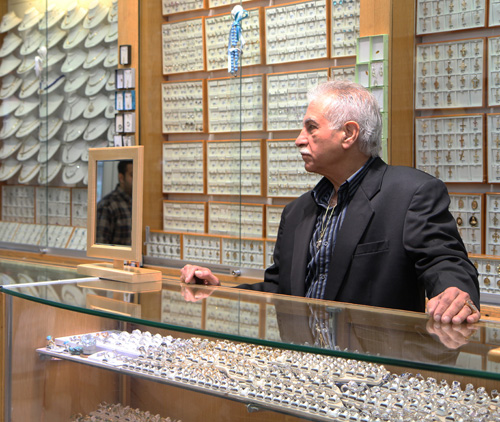 Photo by Nancy A. Ruhling
Larry’s at his counter seven days at week.

Carats and karats don’t carry as much cachet these days, and although the shop does a good business, customers aren’t lining up out the door any more. Occasionally, someone from the old days will stop by.

“They always ask me where the posters and T-shirts are,” Larry says, adding that the shop still sells “Astoria Rocks” T-shirts.

But the only memento that’s left from Yogi Lala’s youth is a denim vest painted by Caine 1. It’s framed under glass and hangs near the ceiling in the back of the store, where it’s all but invisible.

Just the other day, a guy came in with his young daughter to show her the cool place where he used to hang out. He videoed the visit. Diamonds may not be forever but memories sure are.