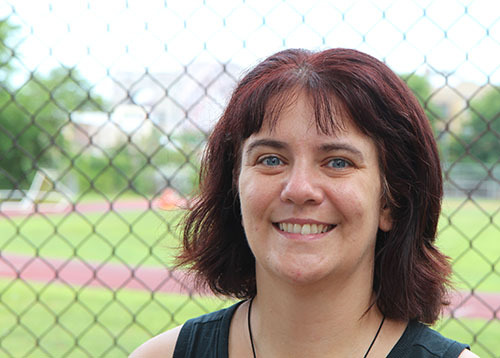 Photo by Nancy A. Ruhling
Marie’s a tour guide for Boroughs of the Dead.

Did you know that the ghost of Roaring Twenties matinee idol Rudolph Valentino downs martinis in The Astor Room?

Have you seen the pregnant shrouded spirit who floats around 34th Avenue at 44th Street?

And have you ever had a close encounter with the garroting ghost of Old Astoria Village? 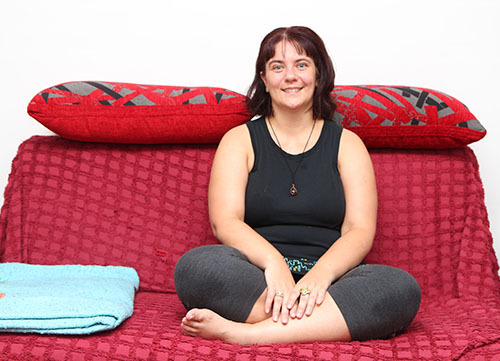 Photo by Nancy A. Ruhling
Marie’s a freelance writer and editor.

He strangled his daughter-in-law with a thin rope and rose from the dead to guard the gold he buried in the basement.

(Put your metal detectors back in the closet; the house was torn down decades ago. Nobody knows exactly where it was because the address was kept secret to throw fortune hunters off the track.)

Marie, fittingly outfitted in graveyard black, shows not a tinge of fright for these things that go bump in the night. 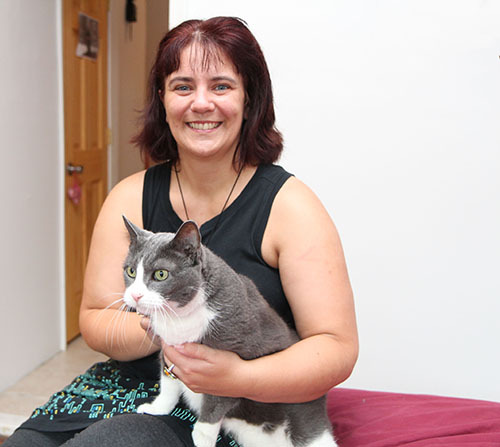 Photo by Nancy A. Ruhling
Marie with her cat, Grace.

On the contrary, she’s delighted to keep her dead neighbors alive through the spirited tales she tells as a walking-tour guide for Boroughs of the Dead.

Marie, a short woman with big blue eyes, takes all this spooky stuff seriously. Well sort of. She smiles — a lot — when she tells the tales.

Wait a minute, she forgot to mention the Creepy-Doll House, which was on 12th Street between 26th and 27th Avenues.

She pulls out her iPhone, whose midnight-black cover features a shining skull, to check a couple of facts. 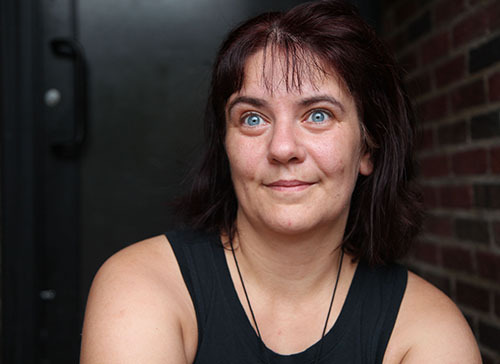 Photo by Nancy A. Ruhling
She’s from Livingston, Scotland.

She’s sorry to say that she never got to see the dolls and mirrors dangling like forbidden fruit from the estate’s trees. The hauntings were halted with its long-ago demolition.

Marie, who grew up in a working-class family in Livingston, Scotland, outside of Edinburgh, has always been fascinated by the spectral footnotes of history.

“I took my first ghost tour at 10 on a school trip to York, England,” she says, adding that her parents are English. “I thought it was a fun and great way to learn history. My dad was a tour-bus driver, and he used to turn everything into a lesson. He started every sentence with ‘Did you know that …'” 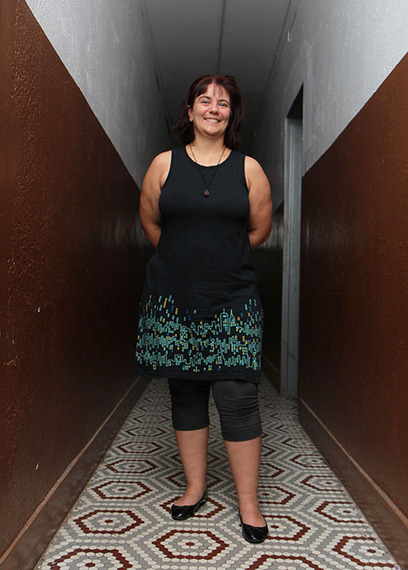 Photo by Nancy A. Ruhling
Marie’s the author of The Trapeze Diaries.

After Marie graduated from the University of Edinburgh with a degree in English literature, she left her friends, family and accent behind for a job with Hanging Loose Press in New York City, eventually becoming a freelance writer, editor and creative writing teacher.

“I had visited Manhattan when I was in university, and I fell in love with the city,” she says.

The sudden death of her dad before her departure made it a bittersweet journey. 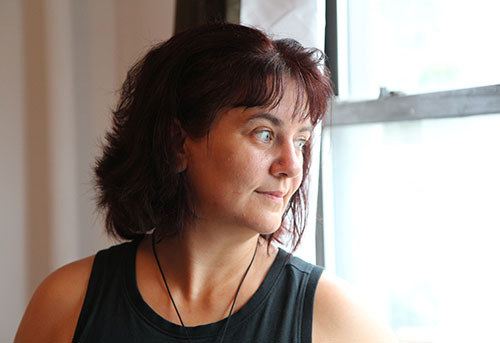 Photo by Nancy A. Ruhling
She studied the trapeze and yoga.

To ease her grief, she took to the trapeze, which figures largely in her fictional memoir, The Trapeze Diaries, where her father’s ghost urges her to new heights. She also trained to be a yoga teacher.

She stumbled across Boroughs of the Dead walking tours, and after she went on a couple, she became a guide. Her first beats included Lower Manhattan and the West Village.

It was while she was riding her black Fuji bicycle (her blood-red helmet makes her in-your-face visible) that she got the idea for the Astoria tour. 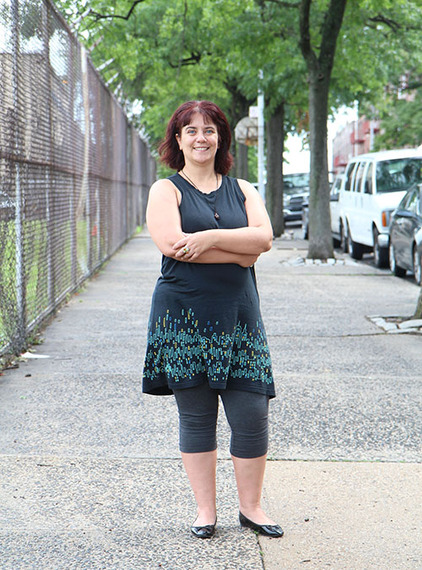 “I got lost by Astoria Park and ended up on 14th Street near the old mansions,” she says. “I wondered whether a ghost tour was possible.”

Rudimentary research convinced her that Astoria could be very scary, which led to the creation of the 2-hour, 2-mile Haunting Histories and Legends of Astoria, the neighborhood’s only regular ghost tour.

“I love bringing a new appreciation of neighborhoods to people, especially in forgotten and less well known places,” she says, adding that one of the characters in Holly’s Hurricane, the novel she is writing, is a New York City tour guide who, like her, is passionate about the past. “I found that even a lot of old timers are excited to hear and share the stories they’re familiar with or they’ve lived here a long time but never really learned the history of the area.” 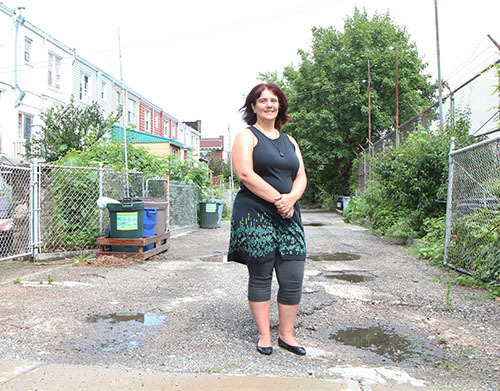 Photo by Nancy A. Ruhling
You’ll see her walking in the neighborhood.

For Marie, those places include Staten Island and Harlem, where she also would like to give tours.

“I want to do them in all five of the boroughs,” she says.

During the summer, on her way to visit her mom and stepdad in Boston, England, Marie toured the ghost vaults in Edinburgh and walked York’s Trail of Terror.

She can’t stop talking about her haunting vacation.