The cane, shiny like a sword, doesn’t bother Konstantinos Pylarinos that much. He’s learned to shuffle slowly with it on one side and his daughter Penny on the other. 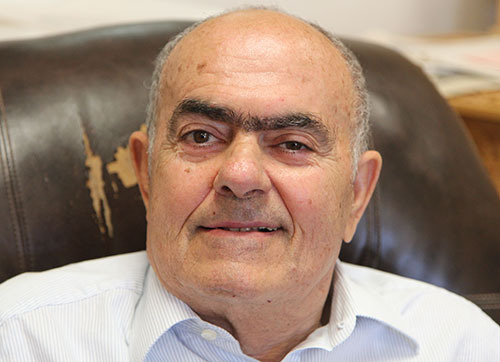 It’s not his feet that he’s worried about. It’s his hands. After the stroke struck him in his 71st year, he couldn’t carve any more, and that hurt transcends the physical pain.

Konstantinos, the owner of Byzantion Woodworking, started whittling when he was a boy in the village of Ahladokastro in Nafpaktos, Greece. 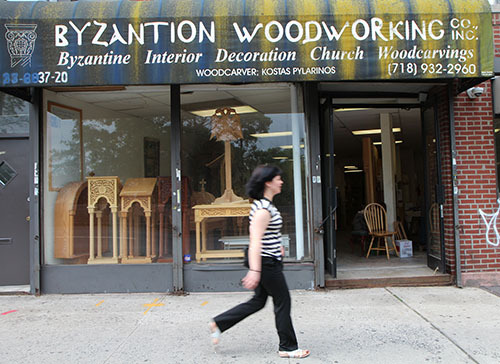 Photo by Nancy A. Ruhling
Byzantion Woodworking on Astoria Boulevard at 37th Street.

His parents were olive farmers, and Konstantinos remembers grasping some branches in his left hand, the one that holds his cane, and carving with his right, the weak one he keeps in a fist near his chest most of the time.

He used a piece of metal from a woman’s shoe and sharpened it into a knife to make his mark. It could have come from his mother’s or his grandmother’s closet. The exact details don’t matter. 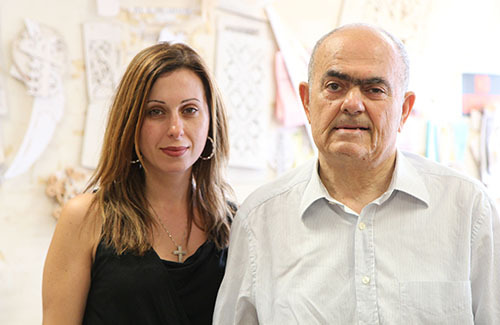 Photo by Nancy A. Ruhling
Penny and Konstantinos are a team.

Konstantinos, as small as a sparrow, never knew much English — he came to America after he was a not-so-young married man.

The stroke also took that language away, but it left him with his Greek and something he didn’t have before: hearing loss.

He tells his story to Penny, who patiently translates his odyssey of unending sentences. 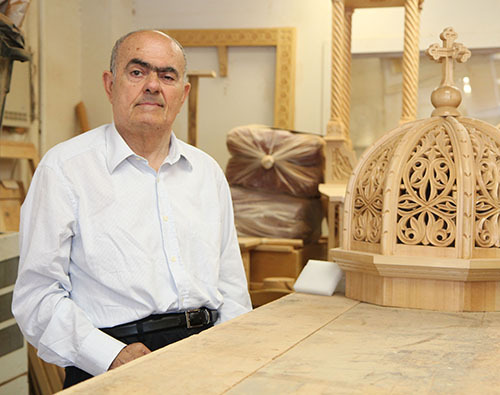 Photo by Nancy A. Ruhling
Konstantinos learned his craft in an orphanage.

His energy is all in his round face, which is animated by fiery dark eyes and strident black eyebrows. It’s hard for him to smile; every time he tries, he looks serious instead of happy.

Konstantinos’ hands didn’t remain idle long. After his father died, his mother didn’t have enough money to take care of her six children. Konstantinos, the second youngest, was sent to an orphanage when he was 14. 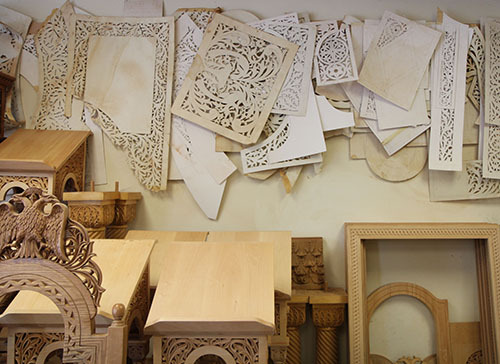 “At that time, it was a common solution,” he says. “I went there to learn a trade.”

At the Zannion Orphanage in Piraeus, Konstantinos apprenticed with master woodcarvers. So skilled was he that by his 18th birthday, he had set up a shop in Athens. 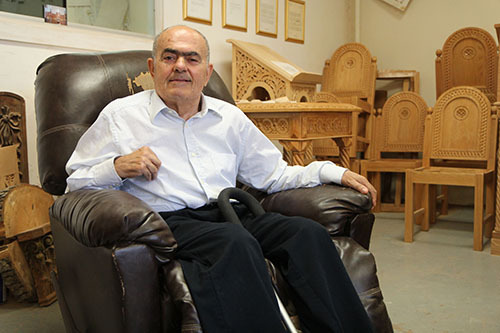 He, like many other woodcarvers in Greece, specialized in the traditional Byzantine style that Greek Orthodox cathedrals elaborately clothe themselves in.

“I chose this field because I remembered the church in my village, and I loved its architecture,” he says. “A couple of years ago, it was my pleasure to donate an icon screen to it.”

God’s work provided for Konstantinos, but it wasn’t quite enough. 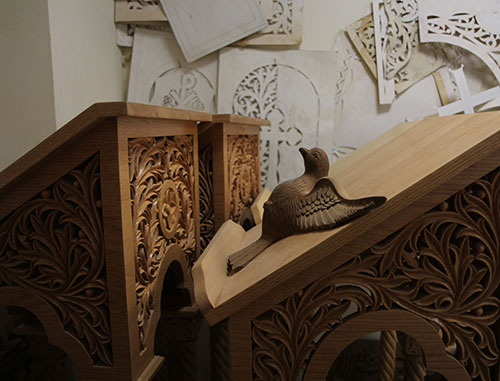 Photo by Nancy A. Ruhling
Byzantion works are carved by hand.

“It was hard because there was so much competition,” he says. 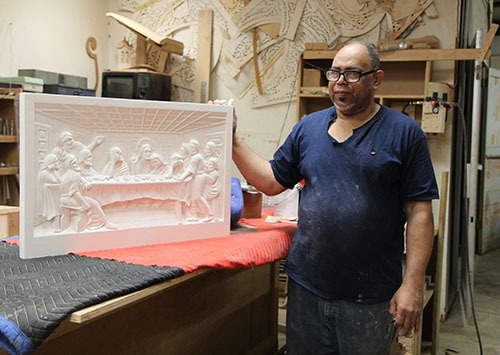 Forty years ago, he set up a proper shop, and in 1980 moved into the 4,000-square-foot space on Astoria Boulevard at 37th Street.

“As far as I know, I’m the only traditional Byzantine-style woodcarver in North America,” he says, adding that he estimates there are only 10 such artists left in Greece. “I’ve done projects for 103 churches in the United States and Canada, including Astoria’s Saint Demetrios Catheral and St. Catherine & George.” 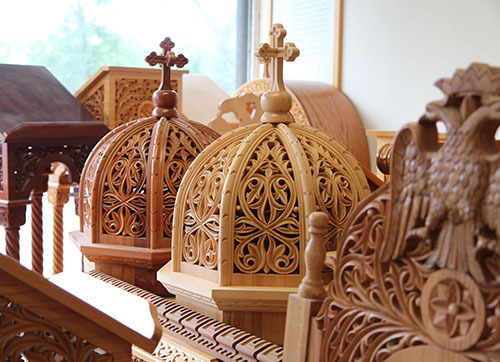 Photo by Nancy A. Ruhling
The firm specializes in Greek Orthodox church work.

He made his living carving the icon screens, bishop’s thrones, pulpits, chanter’s pews and candle stands that made him — and Byzantion — famous in the field.

“There’s nothing else like hand carving,” he says, adding that in later years he concentrated on the commerce, not the art, side of the business. “We do the work with chisels. No machine can duplicate it.” 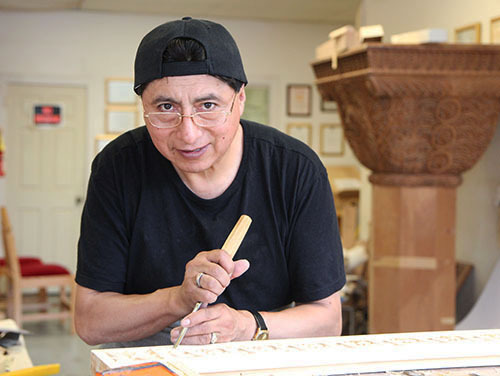 Photo by Nancy A. Ruhling
Patricio Lojano has worked for Byzantion for 15 years.

The pieces, some still sprinkled with sawdust, are as delicate as doilies. (More photos.)

Konstantinos forgets to mention it, but he’s received a lot of recognition for his work.

The New York Landmarks Conservancy gave him an award for his restoration work at Brooklyn’s Cathedral of Saints Constantine and Helen, and the Greek Orthodox Church presented him with the Archdiocesan Medal of St. Paul for his contributions to the community.

The American Folk Art Museum in Manhattan, as well as several upstate museums, have exhibited his work. 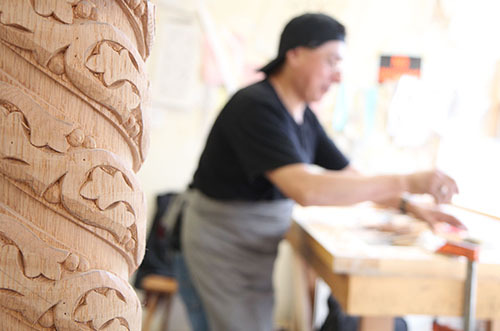 Photo by Nancy A. Ruhling
Byzantion has done work for 103 churches.

Konstantinos got used to spending six to seven days in the shop. Often, his wife, Vasiliki, helped out although she devoted most of her time to their daughters Penny and Antonia.

It was Konstantinos’ love of the art of carving that inspired Penny to graduate from the architecture program at New York Institute of Technology.

“I started working with him when I was in college,” she says. “Even when I had a full-time job with an architecture firm, I still helped him out.”

These days, Penny does the preliminary drawings for her father’s projects. 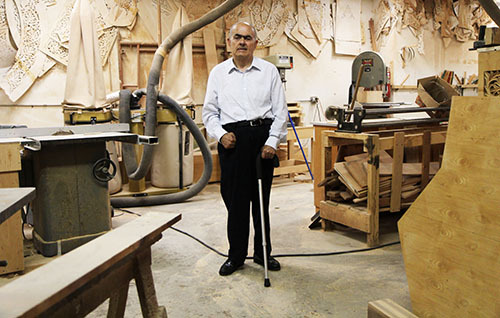 Photo by Nancy A. Ruhling
Konstantinos started by working out of a garage.

Under Konstantinos’ direction, the carving is done by long-time staffers, who work in the light-filled shop chiseling in time to classical music.

Penny is not sure what the future will hold.

Konstantinos just turned 75, and last year, while recovering from cataract surgery, he fell down the stairs at home in the middle of the night. He didn’t break any bones, but the incident did slow him down for awhile. 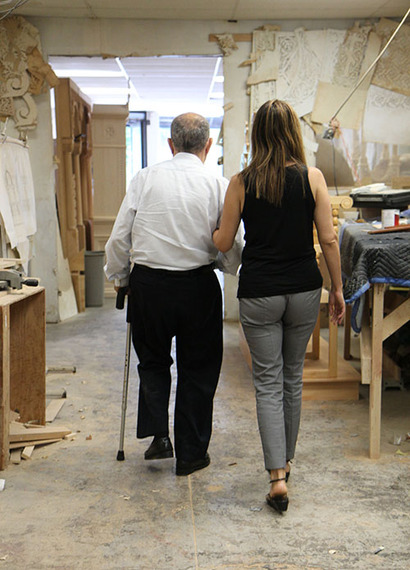 Photo by Nancy A. Ruhling
Konstantinos never will stop coming to the shop.

“I have every intention of keeping the business going,” she says. “My children are only 7 and 10, so I’m looking at a potential partner.”

Konstantinos is getting restless; he’s not made for lounging around.

He pulls himself up and leans, heavily, on Penny.

Even if he does retire, his well-worn recliner won’t sit empty.

He will still come into the shop several times a week holding onto Penny’s arm.