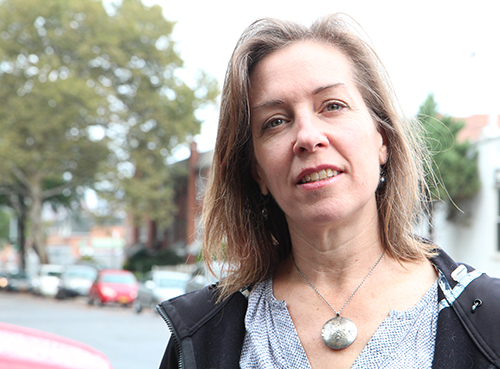 She and Rusty, her 2-year-old orange and white cat, are hanging out for a while until she leaves to sell her skin-care products at a local market.

She’s trying to brush him, but his amber eyes deliberately look away from her; even when attempts tries to lure him with a snack of catnip, he’s having none of it.

Annie, who grew up in Babylon, Long Island with her three siblings, never dreamed that her passions and pastimes would converge perfectly, creating her career and family as well as her present, somewhat fur-strating moment with Rusty. 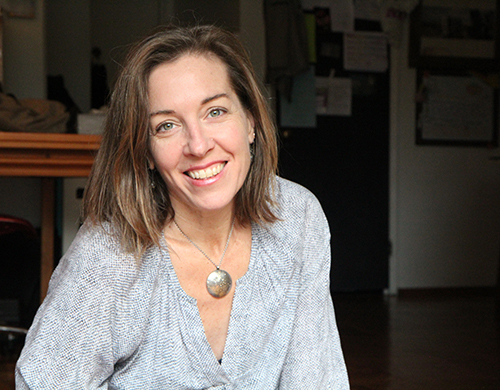 Annie is from Babylon, Long Island.

In the beginning, she followed a conventional path. At her father’s insistence, she enrolled as a business major at Virginia Commonwealth University.

“I had no interest in business,” she says. “My dad wanted one of his kids to go to business school, but I wanted liberal arts, so I tried some different courses and ended up with a compromise – a marketing degree.”

After graduation, she got a job with a Manhattan book publisher.

“I was in the sales department,” Annie says. “I made peanuts and after four years, I couldn’t sit at a desk any longer.” 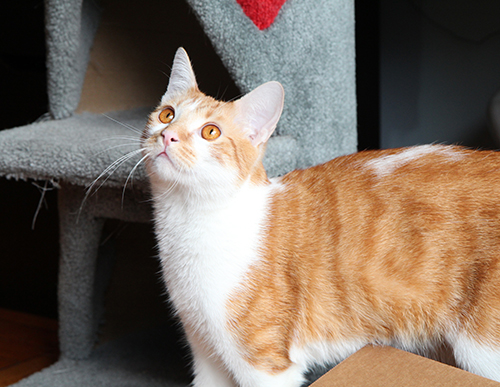 When a friend suggested, for no particular reason, that she become a massage therapist, Annie didn’t hesitate.

“It wasn’t on my radar, but I liked science and the body,” she says. “I’m a people person, and I’ve always been athletic. I like getting to know new people, and I love doing something that’s one on one.”

During her last year with the book publisher, she took night classes at the Swedish Institute College of Health Sciences, where she earned a massage therapy license.

In the beginning, she worked for spas but then struck out on her own. 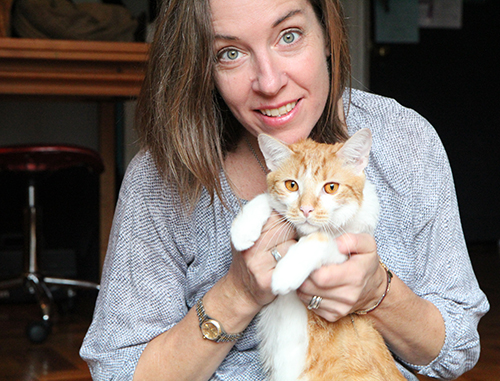 Annie, who has a degree in marketing, started her career working for a book publisher.

“I did some work on film sets,” she says, “and several Hollywood stars became clients.”

Strong and confident, Annie carried her massage table to clients all over Manhattan.

“I bought a carrier on wheels, which didn’t work well on the pavement and made a lot of noise,” she says. “So I replaced them with skateboard wheels – the small ones used for doing tricks – and it was perfect.” 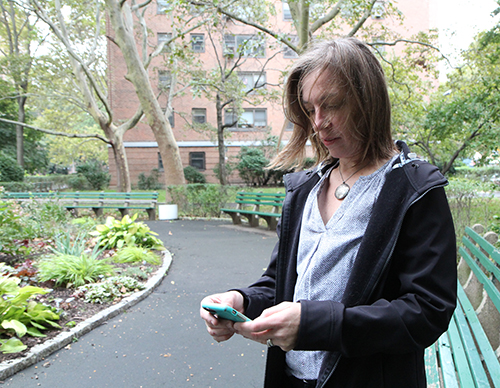 She balances work, family and her business.

Annie’s flexible schedule allowed her to dabble in the arts. She took several courses at The Art Students League of New York.

She brings out a small abstract sculpture she made. The silver necklace and the silver ring set with a light green stone that she’s wearing also are her creations.

At some point, she decided that she needed to learn to speak Italian and signed up for classes at The Cooper Union. 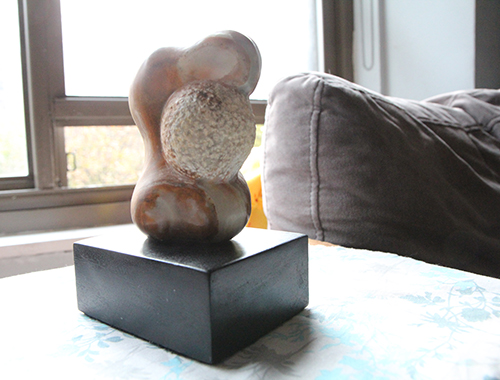 A sculpture Annie made.

She and a classmate kept in touch and in 2004, she invited Annie to a Christmas party.

Annie was mingling when she noticed a guy — black suit, black shirt, no tie — at the other end of the room.

Around the same time, he noticed her and began walking toward her, only to be waylaid by co-workers who drew him into an engaging conversation. 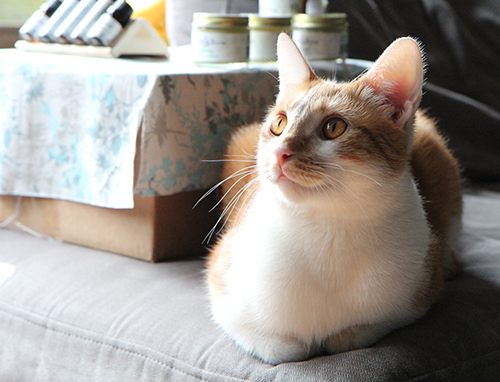 “My friend, who was decades older than I, decided to check out his accent,” Annie says. “She walked up to him, grabbed his arm and asked him the time. When he told her he was from Rome, she mentioned that that’s where I’d just been on vacation. She sort of bonked our heads together; he asked me out to dinner, and that was the end of the beginning.”

A year later, in 2005, Annie married him (his name is Alessandro Mascia, and he’s an architect), and in 2007 they bought their Queensview co-op.

Annie lightened her massage schedule after the birth of Lucia, who’s 12, and Penelope, who’s 10. She started studying aromatherapy and got her certification in 2013. 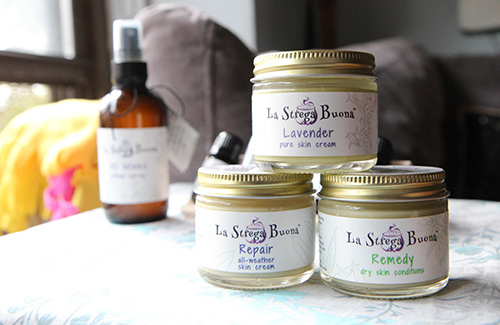 She also became an ardent environmentalist: She compulsively turns off light switches as she walks through a room, composts, makes her own cleaning products and used washable diapers on Penelope.

In 2014, Alessandro’s work took the family to Rome for a year.

“We wanted to submerge the girls in the language and let them get to know my husband’s family,” Annie says. “In one month, the kids were fluent.” 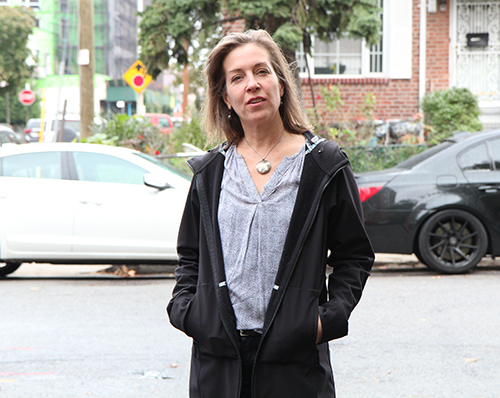 Upon their return to New York, Annie again began focusing on her career, taking on more massage clients and creating a line of natural skin-care products, including face creams and deodorants, called La Strega Buona, which is Italian for The Good Witch.

“I have a garden plot in Roosevelt Island where I grow the herbs,” she adds.

My Breast Friend, an organic oil blend of juniper berry, sweet-scented clary sage and lemon, is one of her more innovative creations. 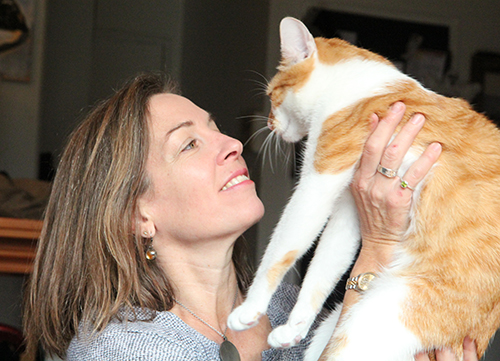 “I made it to encourage women to do monthly breast exams,” she says. “You massage it in, and you smell great to boot.”

With the girls in school full time, Annie is devoting her days to her massage clients and La Strega Buona.

“I’m marketing myself as an aromatherapy consultant,” she says. “I want to work with private clients to create custom products.”