“I wanted to greet you as the Italian Fairy,” says Simona Rodano as she opens her arms and embraces me like a long-lost friend. 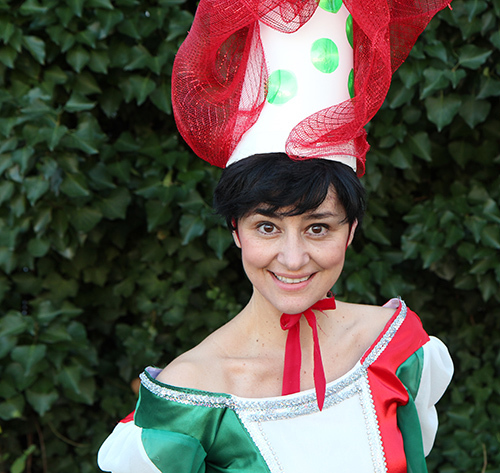 The Italian Fairy, aka Simona Rodano.

Her Italian-flag red, white and green costume, which culminates in a three-foot-high cone hat sprouting streamers, is, like the character, of her own creation.

A singer/performer/producer/teacher, Simona got the idea in a class of toddlers she was schooling in the Italian language.

“One of the fathers called me the Italian Fairy,” she says, as she strolls through Ditmars Park, where she is holding court with a couple of kids. “And I thought it would make the class more fun if I became that character.”

It worked like magic. The students – and Simona – were enchanted by the Disneyesque diva.

Simona, a pixie with surprise-wide eyes and an evergreen smile, has been on many stages, but it was the Italian Fairy who breathed new life into her career. 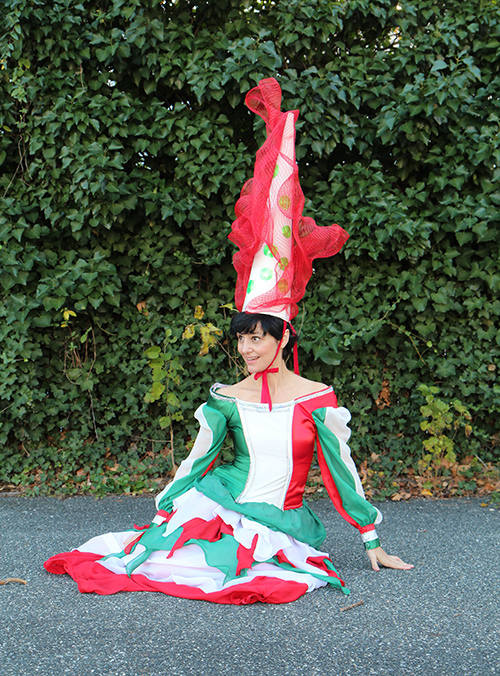 Simona designed her own costume. She made the top and hat; the skirt was made in Florence.

She got her first taste of music in church, which she attended every Sunday in her hometown of Torino, Italy.

By the time she was 7, she was singing and playing guitar. At 15, she was performing in local clubs.

“It was my passion,” she says. “During the day, I was one person. At night, I was another. I lived with my dualism for many years.”

Although her mother’s side of the family is peopled with professional musicians, Simona’s parents did not want her to be their encore. 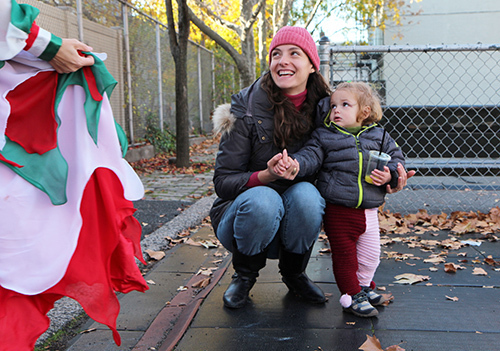 Children — and adults — are enchanted.

So she studied science in high school and at the University of Turin. When she wasn’t in the classroom, she was on the stage.

Upon graduation, she got two offers – a scholarship from a hospital in Westchester and a singing lead in a new variety show on Italian national TV’s Rai 1.

After much soul searching, she selected New York, where she set about settling in. 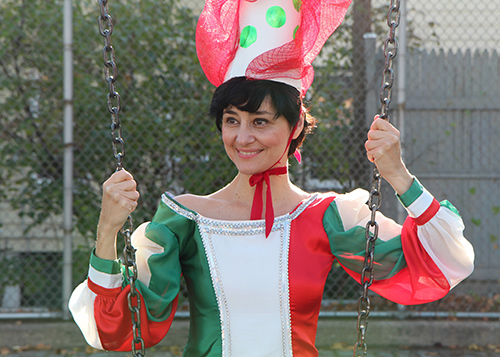 Simona was a singing star on Italian TV.

“I knew some English, but it’s one thing to sing in English and another to speak it with people every day,” she says.

She loved the city, but after three months, when Milan-based Rai 1 called again, she said yes. 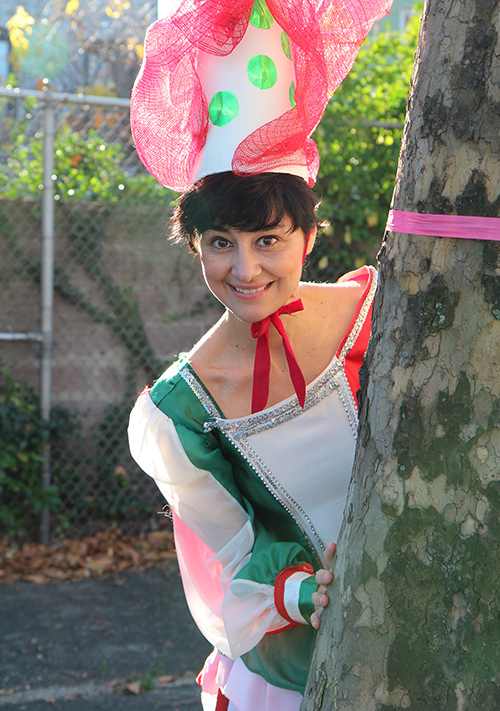 On weekends, she performed at weddings and clubs, traveling all over Europe.

“It was easy,” she says. “The plane rides were not long.”

From 2003 to 2010, she also starred, when her TV schedule allowed, in the musical Pinocchio, whose performances were on nights and weekends.

In her free time, she took voice lessons at the International Music Academy in Milan with the hopes of doing opera.

“I was completely fulfilled,” she says, adding that she didn’t think much about sleeping. “My dream had come true.”

When the TV show ended, in 2006, Simona came to New York City to visit a friend. 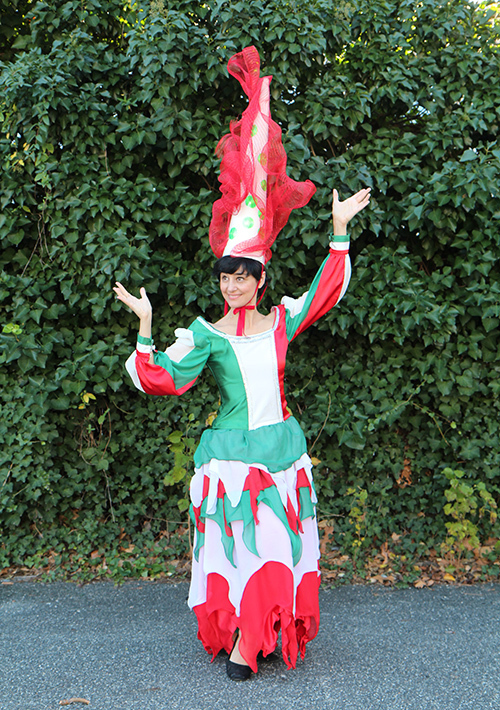 She also starred in the Italian production of the musical Pinocchio.

“I needed a vacation,” she says. “I had worked so much that I felt like an empty bottle that needed to be filled.”

She took time to do an audition, which led to a Carnegie Hall recital in 2007 and a decision to move to Astoria.

“I started from zero again as a singer,” she says. “Nobody knew me, and I only knew two people.”

That’s when the Italian Fairy started teaching Italian to children at a private school in Manhattan and when Rai 1 called her to do some reunion summer shows.

By this time, she had Durr, an ancient snow-white cat she had adopted from one of her pupils who had become allergic. 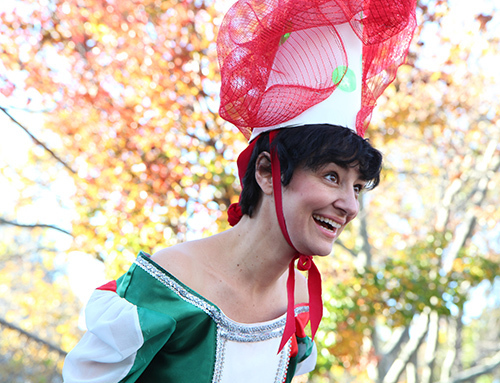 She brings laughter to her role.

He moved in, and when she came back, he stayed.

The next year, St. John’s Preparatory School hired Simona to teach the after-school glee club and then named her director of its nascent performing arts program.

Living in New York with the Italian Fairy, who makes appearances at venues like the Columbus Day Parade, has fueled Simona’s creativity. 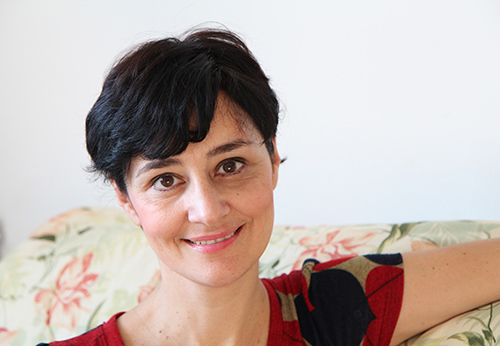 Simona when she’s not the Italian Fairy.

In addition to creating a line of educational products under the Italian Fairy brand, Simona co-produced the 2010 two-week run of the Italian-language Pinocchio at The Kaye Playhouse at Hunter College.

“I’ll always keep singing, but I won’t be touring any more,” she says. “There are seasons in life, and being the producer of new shows is my new one.”

The Italian Fairy takes off her tall-tale headdress and heads back to her apartment to change into Simona’s street clothes.