A coffee cup. And a trumpet. Josh Deutsch carries them out to his second-floor balcony. He didn’t intend to bring them both; it was a spur-of-the-moment decision.

If you think that the only thing that links them are Josh’s hands, you’re wrong. They sum up, better than any words, what he is all about.

The cup is filled with the fancy coffee he brewed this morning. 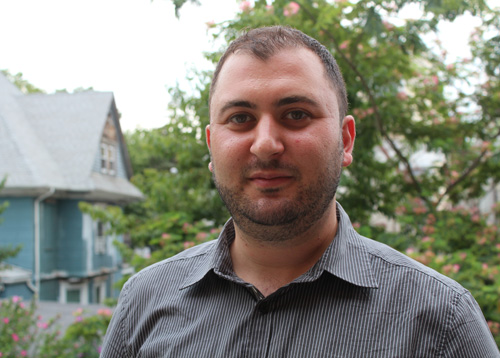 Photo by Nancy A. Ruhling
Josh has three musical careers.

In between sips, he takes up the horn, tooting a soft wake-up call to the sun as it alights on the fuzzy flowers of the mimosa tree. He usually practices inside, but he says his neighbors won’t mind his jamming alfresco just this once.

The trumpet is like Josh’s third hand. His musical career started at the piano when he was 5. He’s only been playing the trumpet since age 9. 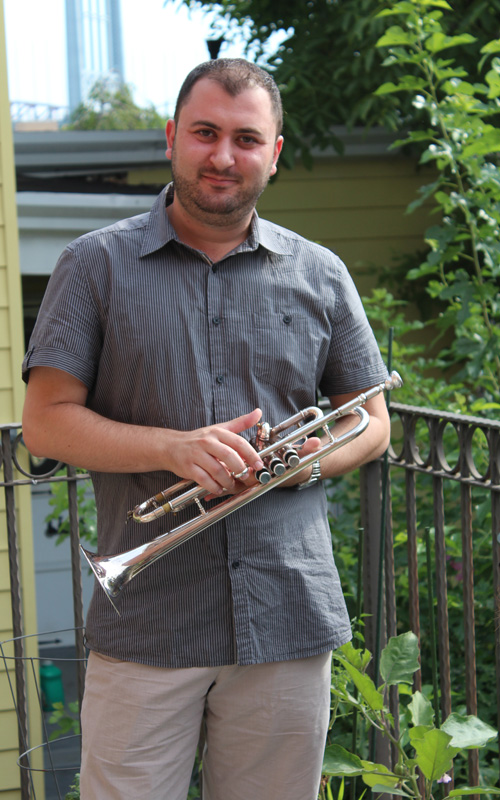 Photo by Nancy A. Ruhling
Josh took up the trumpet at age 9.

“I’ve always been attracted to the timbre of the brass instruments,” says the 30-year-old Josh, who’s as cute as a bear cub. “They have such a fantastic dynamic range — they go from loud and obnoxious to lyrical. I’m drawn to music with brass in it — jazz, orchestral, funk — anything with horn in it.”

The balcony contains a container garden of herbs, plus a couple of barbeque grills. Josh, composer/musician/music teacher, loves to cook. 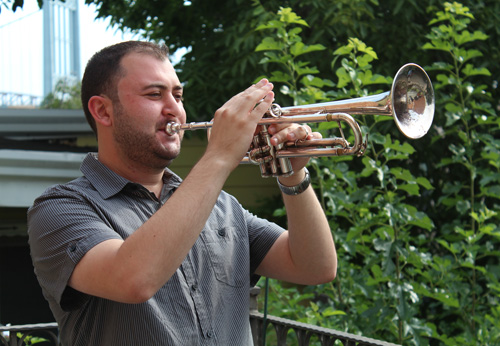 Photo by Nancy A. Ruhling
Josh plays in several bands.

Whether he’s performing at a club or preparing stuffed peppers, Josh favors an improvisational flavor.
That’s probably because his first music lesson wasn’t structured around scales.

“The teacher was also a composer, so the first tune I learned, I Got Rhythm, was by ear,” he says. “I love jazz because it’s totally new every time. The spontaneity and interaction of it has a conversational and community aspect.”

His parents, who have a great interest in music, bought the piano for Josh, their only child, after he saw one and was “totally captivated” by the sounds that could be made from its 88 ebonies and ivories. 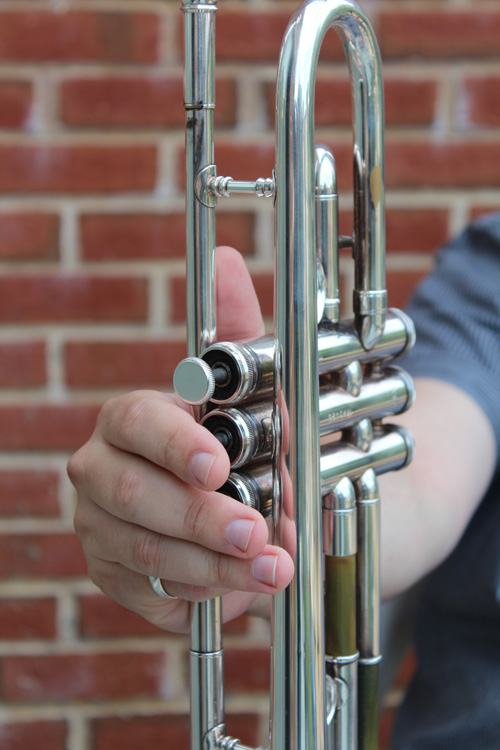 Josh’s trumpet of choice is a silverplated Conn Vintage One.

By the time Josh was in fourth grade, his ear led him to the French horn.

“It was a little too big for me,” he says. “My arm wasn’t long enough for me to reach into its bell.”

So he settled on the jazz trumpet. “The music came to me naturally, but the discipline didn’t,” he says. “But music became more of a priority for me than sports. And I lucked out because my middle-school and high-school jazz bands were some of the best in the country. More than half the members in my class became professional musicians in New York.” 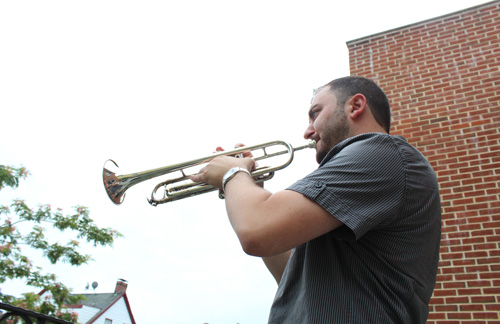 Photo by Nancy A. Ruhling
Josh toots an impromptu tune on his balcony.

Although Josh knew he wanted to be a professional musician, he worried that he wouldn’t be able to make a living at it. After earning a bachelor’s degree in jazz studies from the New England Conservatory of Music in Boston, he got a master’s of music degree in jazz performance and composition from the University of Oregon.

“While I was doing the master’s, I was a teaching assistant, and I was drawn to teaching, too,” he says. “From my first lessons as a child, teaching has always been an important part of how I see music.”

From the beginning, he knew he would end up in New York. He has what he calls a 50-50-50 career comprised of performing, composing and teaching. (Never mind that the sum of the three equals 150, not 100; Josh is a maestro improviser, so he makes the math add up.) 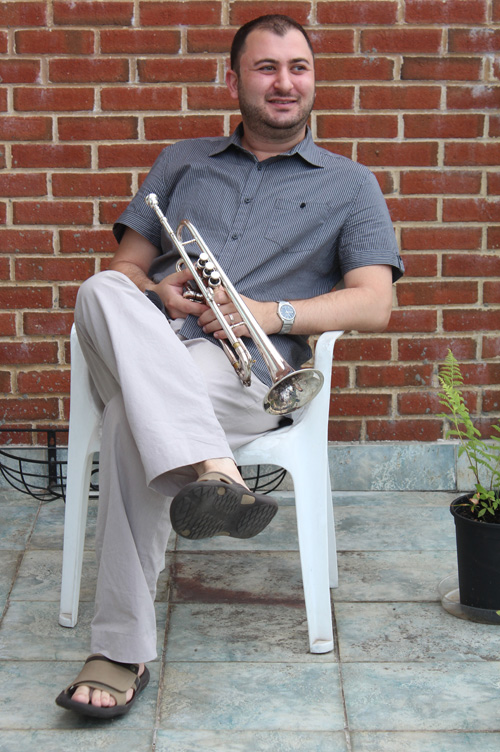 Photo by Nancy A. Ruhling
Josh, the composer/performer/music teacher.

“It’s a nice balance,” he says. “Teaching re-inspires me; I see the music again through the eyes of my students, whether they are children or adults. I try to work in improvisation and composition with every one of them, even if they don’t realize I’m doing it.”

After he has his wake-up cup of coffee, Josh spends three to four hours a day practicing the trumpet and piano and works on his composing. He teaches in the afternoons and evenings, sometimes performing after the last lesson.

“The songs of mine that are the best I grab out of the air,” he says. “It’s as if their melodies already existed. But to do that, it takes a certain amount of training that allows you to prepare yourself to find the space where the music flows.” 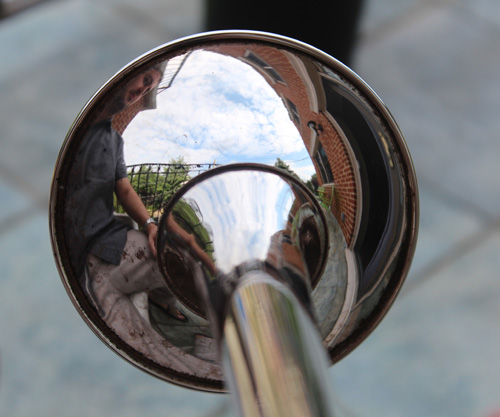 Photo by Nancy A. Ruhling
Josh reflected in his trumpet.

You’ll see Josh playing his horn with guitarist Nico Soffiato. They have played together seven years, have toured Italy and just released a CD.

Or with Pannonia, the band that features not only trumpet but also trombone, violin, bass and percussion players. Josh is writing its music, which he describes as a blend of classical, improv and groove with a Balkans and Eastern European accent. 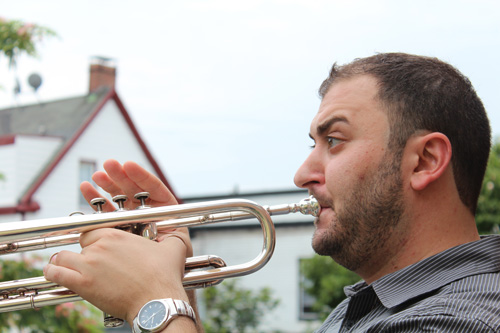 Photo by Nancy A. Ruhling
Josh wants to continue to be a player in all three professions.

“It’s based on things more typed to jazz and literary sources, including Tom Robbins’ novel Jitterbug Perfume,” he says.

Or with Hipstones, the hip Australian soul band. Or the Queens Jazz OverGround, which Josh hopes will put the Queens of Louis Armstrong, John Coltrane and Count Basie back on the jazz map.

For Josh, teaching, composing and playing have become the perfect combo; he asks for nothing more. And it’s all the better because he didn’t plan it that way.