That’s what the big illuminated sign screams in red-apple letters that look as though they should be shining on a Times Square marquee.

It’s a striking announcement on a middle-of-nowhere block filled with warehouses hemmed in by houses, all the more so because Elaine Poulos, the face of the place, is such an unassuming woman.

She’s small and spare with long, brown hair. It’s hard to imagine her doing something so harsh as throwing a bowling ball. It’s easier to see her patting it along its path, pleading with it, pretty please, to knock down those pesky pins. 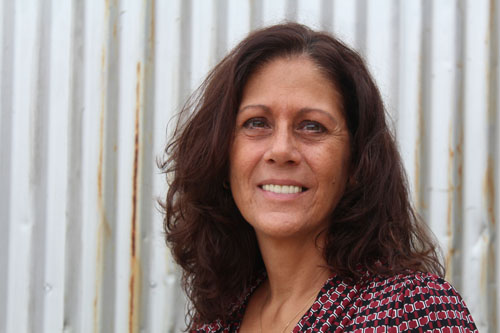 Photo by Nancy A. Ruhling
Elaine has owned Astoria Bowl for three years.

Elaine, a self-described “average bowler,” and her husband, Perry, bought Astoria Bowl three years ago, and she’s been the prime pin person ever since.

Astoria Bowl was built in 1962 when Elaine was 5, and it was called LaGuardia Lanes. She learned to bowl when she was a teenager growing up in Jackson Heights, where she still lives. She continued playing when she was a wife and mother and made it her business to teach her kids to bowl. Soon, she was running a couple of leagues at the alley, which by that time was going by the moniker of Maric Lanes. She always considered bowling a sports hobby, not a career.

She had higher aspirations; like many little girls in the early 1960s, she wanted to be a singer or a stewardess. She ended up becoming a secretary, graduating from the Katharine Gibbs School. Yes, she has had jobs through the years, but essentially, she became a stay-at-home mom to raise her two daughters and single son. 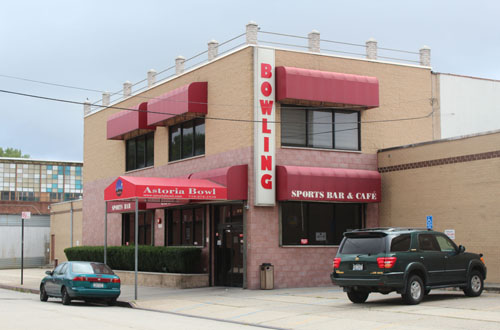 Photo by Nancy A. Ruhling
Astoria Bowl is on 49th Street, between 19th and 20th Avenues.

Astoria Bowl is Astoria’s only bowling alley, so when there was talk of its closing, Elaine tossed her ball into the ring. It was the right time: Her husband had just lost his job on Wall Street.

“I love bowling because it brings people together,” she says. “It’s socializing and competing; it’s not a dangerous sport like football. You really get to know people, and it’s a nice evening out.”

Elaine can attest to that; when she was dating her husband, they frequently went bowling with a group of friends and even joined a league with another couple. They didn’t meet at an alley playing pins — the first time they saw each other was at a Sweet 16 punch-and-cake party at a Knights of Columbus hall. They’ve been together ever since. 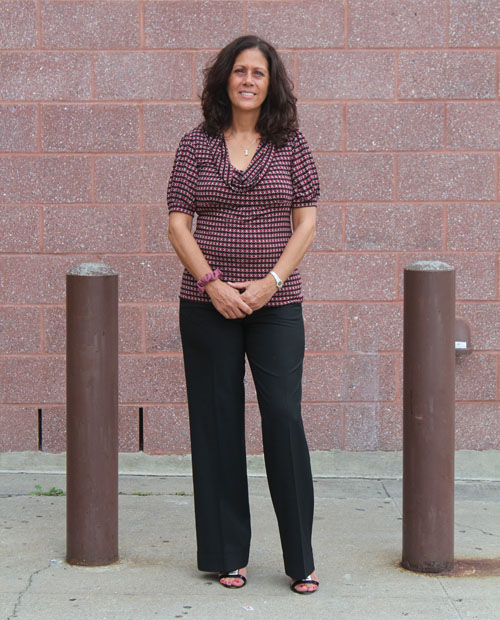 Photo by Nancy A. Ruhling
Elaine has been bowling since she was a teenager.

It’s also an economical night out: You can play a game on one of Astoria Bowl’s 28 lanes for $4 to $7 per person. Shoes are $4, but balls are free. It’s not uncommon for league games to last past midnight on weekdays and run until 3 a.m. on weekends.

Astoria Bowl is a throwback to earlier times, and that’s the way Elaine likes it. There’s blond paneling on the walls, and the colorful circus-patterned carpet, brand new, looks as though it belongs in some cheesy 1970s Vegas casino. The décor, she says proudly, is “retro modern.”

The murals backing the lanes rotate to reveal several edgy robotic-like designs, and Elaine’s proud of introducing something she calls “cosmic bowling,” where the balls pulse to pulsing music and black lights; think of it as Disney disco. It brings in a lot of 20-somethings. Hey, whatever rock rolls your bowling ball. 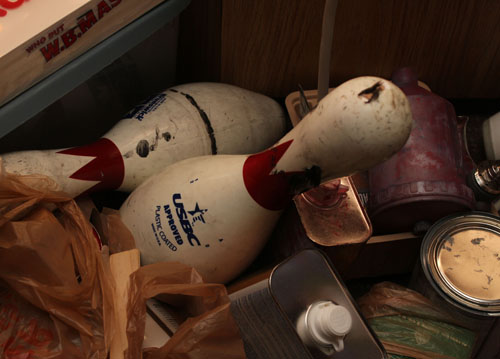 Photo by Nancy A. Ruhling
Renovation in the works: pins and paint.

Astoria Bowl, above all, is a family place: There’s a sports bar with a flat-screen TV, and the eats run from hamburgers and hot dogs to grilled chicken. In the mornings, breakfast is served between strikes.

“The popularity of bowling is a like a wave that goes up and down,” Elaine says. “I saw this during the many years I was playing.”

Right now, the wave is at a high-five at Astoria Bowl, which is a good thing because Elaine’s husband is out of work again.

Photo by Nancy A. Ruhling
Contemporary murals define the lanes.

“Business has picked up tremendously since we took over,” she says, adding that major renovations have been completed. “It’s paying its own way, but we still have changes to make. And I don’t know whether it will ever support us without one of us having a second job.”

Speaking of bowling, Elaine, whose best score hovers around 152, doesn’t play much any more. It’s not that she doesn’t have enough time, although she could make that case because she’s on duty five days a week 9:30 a.m. to 5 p.m. and on call all the time. 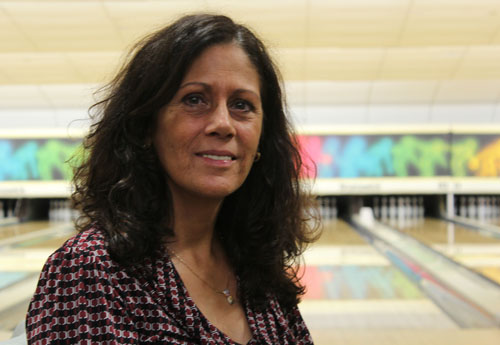 She has carpal tunnel, which makes it hard for her to handle a ball. She’s trying to teach herself to be a lefty, but it’s been slow going. Instead, she gets a lot of satisfaction watching the kids play.

“When they throw the ball and they hit a pin, their faces light up,” she says. “It’s magical.”

At 10 a.m., the children’s games start with an announcement over the loudspeaker. As the junior bowlers take their stations on the lanes, Elaine looks out at them and smiles. She can’t wait for them to have some fun.