You don’t see this very often. Eric Mathews is sitting on a park bench at the Astoria Houses promenade watching the fog roll off the East River.

Eric, trim, taut and poised to spring like a rubber band, isn’t used to sitting still with his hands, creased like the distressed leather of his jacket, lying idly in his lap. He’s worked far too hard in his 47 years to rest, even for a minute.

He grew up in the projects. He’s come a long way since then, which is why he’s come all the way back to them. 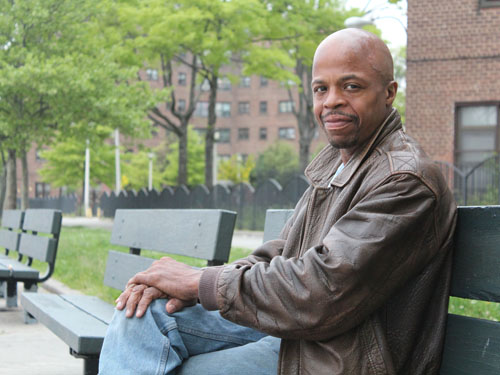 Photo by Nancy A. Ruhling
Eric, the founder of the Minor Miracles Foundation.

He wants to make a difference.

Recently, there was a shooting in one of the 22 buildings that make up the New York City Housing Authority’s 32-acre, waterfront complex that houses Eric and 3,134 other people in 1,102 apartments. And Eric wants to make real sure it never happens again. 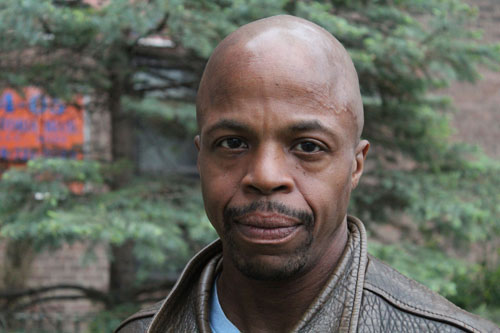 Photo by Nancy A. Ruhling
Eric has come back home to Astoria Houses.

The last red brick at Astoria Houses was cemented in place in 1951, before Beaver Cleaver and Dennis the Menace told us what family life was supposed to be like. Eric and his three siblings arrived in the late 1970s.

“As a kid, I had a wonderful life here,” he says. “It’s a rolling campus, there were lots of activities — I was running and ripping with my friends — and my parents were attentive. I was poor, but I thought I was rich.” 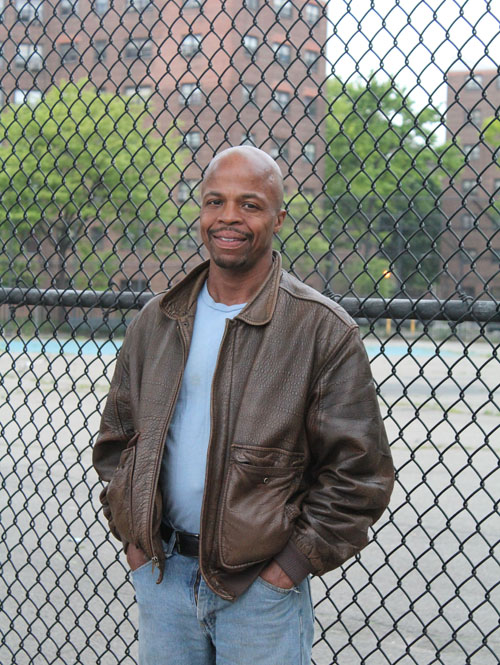 Photo by Nancy A. Ruhling
Eric has fond memories of his childhood in the projects.

When he left, in 1983, to go to Wagner College, the projects were being turned over to crack heads. Eric became his family’s first college graduate, earning a degree in biology. He made his mark in the field of technology project management and didn’t look back until a couple of years ago when his father got sick.

He returned to an Astoria Houses that he didn’t recognize. Sure, the same six- and seven-story buildings remained, but they offered nothing to keep the kids off the street. 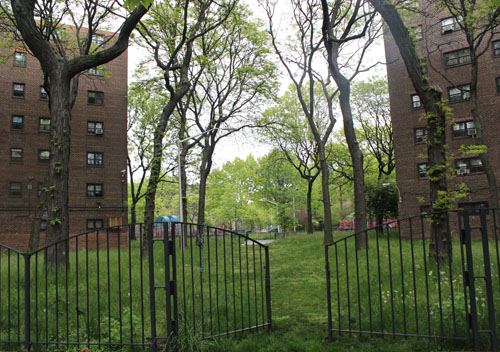 Photo by Nancy A. Ruhling
Astoria Houses was finished in 1951, nearly three decades before Eric came.

“I saw a tremendous need in the community,” he says. “The kids didn’t have the advantages I had that led me to college.”

So in July 2011, he quit his full-time job and set up the Minor Miracles Foundation, a nonprofit whose mission it so make Astoria and Long Island City a childhood obesity-free zone by promoting physical fitness and nutrition.

“My life went from profit, sales and quotas to people and children,” Eric says, adding that, when he has time, he still works as an independent technology project manager. “There’s more quality in my life, but there’s no money.” 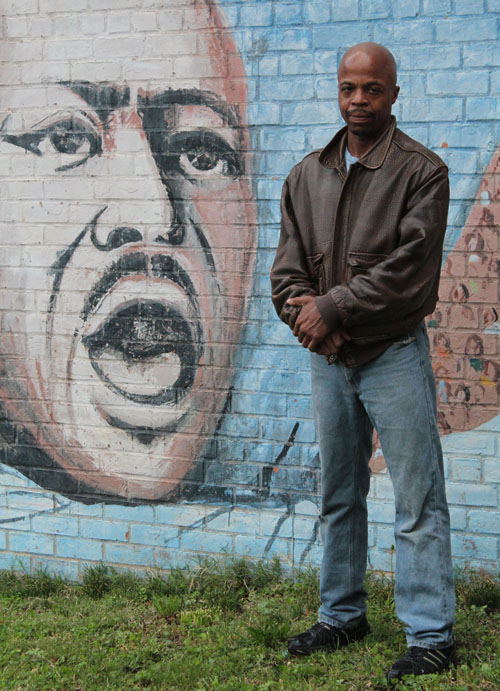 Photo by Nancy A. Ruhling
Eric plans to restore the Astoria Houses mural.

His healthy notions spring not only from his own youth but also from his decades-long devotion to martial arts. He’s a daily practitioner of meditation and Song Moo Kwan Taekwondo.

“It gives me discipline,” he says, adding that it revs up his creative energy so he can focus on Minor Miracles. 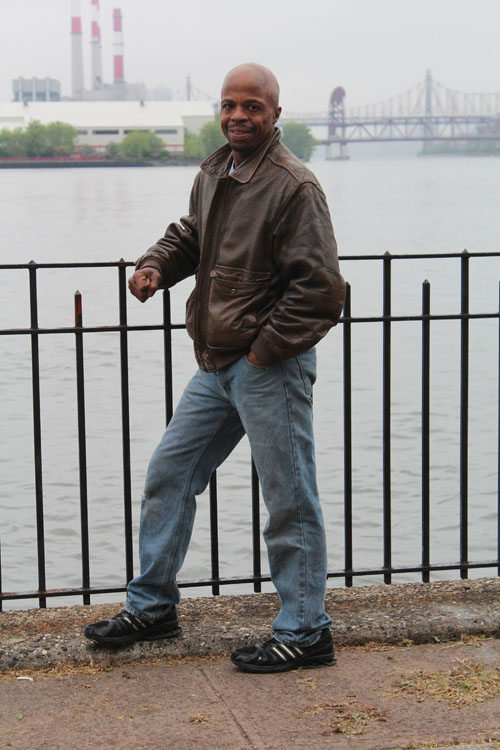 Photo by Nancy A. Ruhling
The promenade is one of Eric’s favorite spots.

Minor Miracles, which with Eric has an unpaid staff of four, is hoping for a minor miracle. It is trying to raise an annual budget of $25,000, which will allow it to work with 1,000 middle-school kids. In addition to private donations, it has a New York City Parks Foundation grant.

“I want Minor Miracles to be the spark that changes the lives of these kids,” Eric says.

Aside from giving up his full-time job, Eric has made other significant sacrifices. 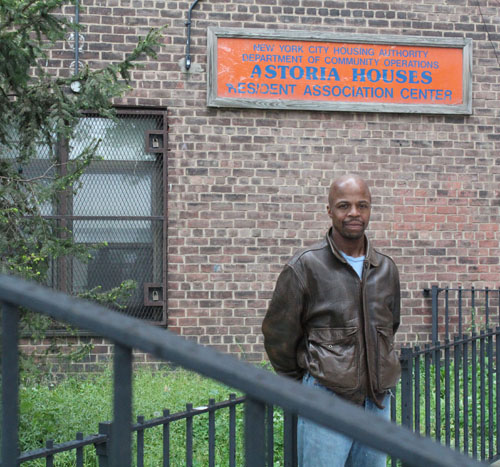 Photo by Nancy A. Ruhling
Eric’s mission is to help kids in the projects.

“I like to be in the background,” he says. “But I can’t be now. I have to let people know about our mission.”

“I’m starting to see some of the same faces,” Eric says. “And they are starting to respond; they see me and ask, ‘What are we going to do next?’ It’s a wonderful feeling.” 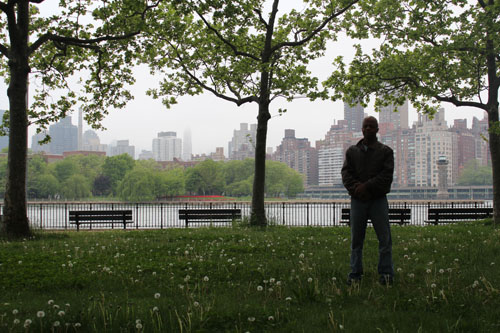 Photo by Nancy A. Ruhling
The waterside view the projects see through the trees.

“I like taking little and making something of it,” he says. “And I like to make things happen; with this, you can see the results.”

For now, Eric’s big plans are starting small. He’s getting a group together to restore the 1981 Martin Luther King Jr. mural on the side of one of the Astoria Houses buildings, and he’s going to landscape the surrounding area. It will look much as he remembers it, but it will be different: The Obama family will be painted into the picture. 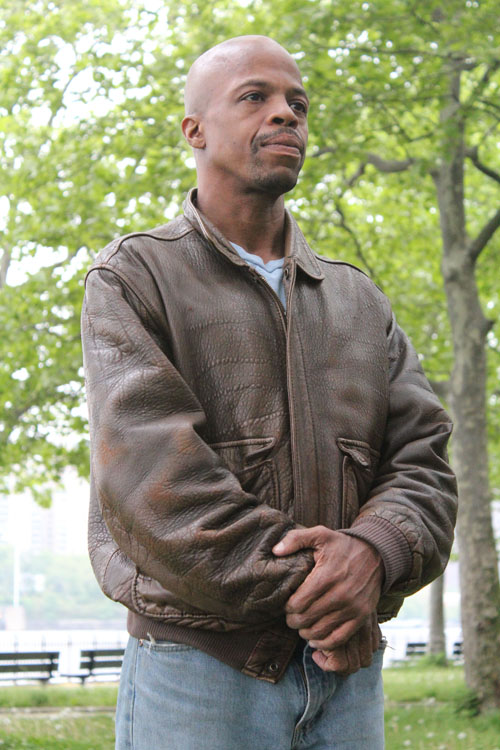 Eric hopes that someday Minor Miracles becomes Major Miracles with programs in communities all over America.

“I’m putting all my energy and spirit into this,” he says. “If I can get one child inspired to achieve something, I’ll be a success.”

A barge chugs by the promenade, and Eric grins like the little boy he once was.