It’s the dog days of summer, and Zora is sitting on the front porch watching the people pass by.

She’s a puppy — my puppy — and she thinks the world is her bone and that every person is dying to pet and play with her. That’s why her bobbed tail snakes back and forth at every footfall.

A new immigrant, Zora is seeing everything in Astoria for the first time. She’s lived here half her life — three of her six months — but she knows she’s sure not in Midland, Virginia any more. For one thing, there are no llama farms on Ditmars Boulevard. 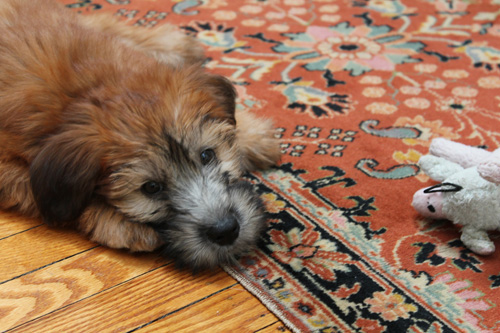 Photo by Nancy A. Ruhling
Zora taking a play break.

Zora’s a Wheaten terrier; there aren’t many of her kinfolk in our neighborhood, which seems to be populated predominantly by pit bulls of plural pedigrees. Her family comes from working-class Irish stock: Zora’s ancestors earned their keep herding sheep.

I named her Zora, the light of dawn. When I brought her home, she was red like a fox. Now, she’s as orange as an orang-outang. Standing, she looks like a cuddly bear cub. By the time she’s a big dog, though, she’ll be as blond as Marilyn Monroe.

One more thing: Zora doesn’t speak English or Greek or Italian or any of the other languages that you hear here. Her native tongue is Doglish, but she’s prefers hugs and kisses to barks. She never needs a translator. 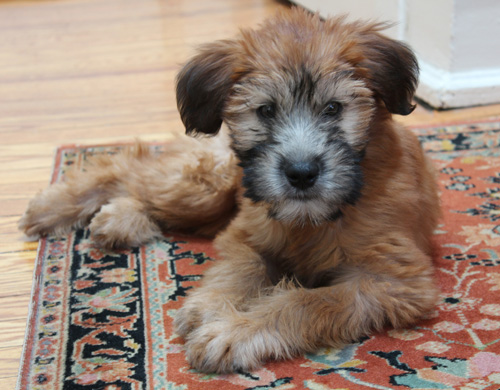 Photo by Nancy A. Ruhling
Zora posing for her formal baby picture.

I wasn’t born and bred a dog person, so I’m aware that there are a lot of people who aren’t crazy about those of the canine persuasion.

Since I moved here seven years ago, I’ve proved, more than I’d like to admit, that it really is true that good fences make good neighbors. But I’ve discovered that sometimes all it takes to break them down is a fearless puppy like Zora who jumps over them petite paws first with eyes wide closed.

Every morning, Zora and I walk to Astoria Park as the sun rises. Every evening, we do Ditmars Boulevard, circling from 26th Street to Martha’s County Bakery. 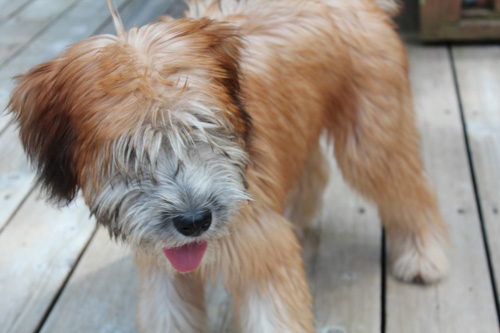 Photo by Nancy A. Ruhling
Zora loves the character and characters of Astoria.

At first, there was nothing remarkable about our journey. But soon I started noticing people noticing us.
The lace-curtain ladies who live on each side of me popped out their heads long enough to get a good look at their new neighbor.

An old woman, frowning at the frailty of life, smiled and said, “God bless” as she walked by the house. A man at the bus stop bent down to pet Zora. A bunch of rowdy school kids crowded around her and screamed their approval. And the corner-shop owner, a real tough guy who doesn’t like a single or even a multiple thing, stopped to scratch her head.

As the months have gone by, we have made so many friends — dogs and dog owners — that I can’t count them all. But we’ve come to rely upon the kindness of these strangers from all walks and leashes of life. 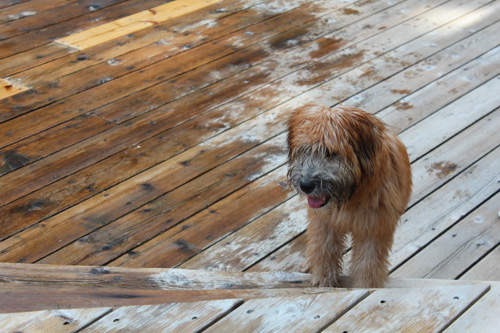 There is the woman with the black dog who loaned me her leash to add to Zora’s so she could go twice the distance in the park while the bigger dogs bounded and barked around her. There is the man with the brindle boxer who persuaded me to let her roam free in the meadow; he promised to retrieve her if she tried to run for the great green yonder. (She did, and he did.)

There was the woman who ran to help when a big, bully dog bit Zora on the face so hard it make her yelp to the sky. There is the guy who told me to use his hose to cool Zora off; he’s keeping it turned on for her. And there are the countless others who have given me the poop on the pooping and peeing of puppyhood, which I have been assured will pass sometime this century.

It was while I was acting on one of these tips that it happened. It was suggested that I train Zora to do her business close to my house when snow and heat and rain keep us off our regular schedule. 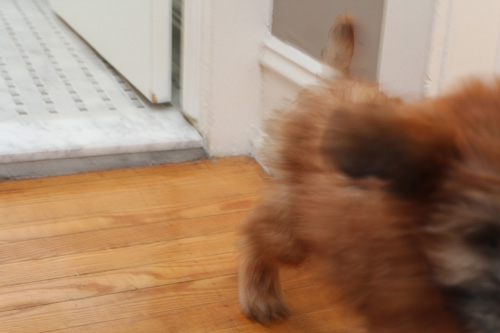 Photo by Nancy A. Ruhling
Streaking, she looks like a fox on the run.

The idea was to find a sweet spot that she could call her own. With this in mind, I spent two weeks walking her in circles around my back-yard access road, home to numerous neighborhood dogs, doing a circuit that encompassed three houses.

She seemed to be getting the idea, so when the first heat wave hit, I put her to the test. I carried her outside (I didn’t want her to burn her paws on the metal steps of my balcony stairs) and started circling her like a wagon train. 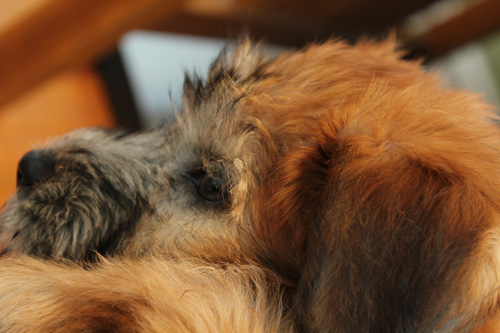 Photo by Nancy A. Ruhling
The pepper didn’t make Zora sneeze — it made her sad.

That’s when I saw it: A major section of the road, including a portion by my fence, was covered with a blanket of red. It looked like sand.

Zora knew better. It was red-hot pepper. The ultimate unwelcome doggie mat worked like a charm: Zora stepped on it, immediately realized her faux paws and stepped back.

She’d never cross this road again, much less jump over its red-pepper fence.