“Oh! Look at the cute baby,” coos Rose Marie Prager as a woman, infant strapped to her back, walks by. “See the little sunglasses she’s wearing!”

Rose Marie’s comment isn’t an idle one. The 81-year-old mother of nine and grandmother of 11 likes, no, let’s make that LOVES, children. And she’s at her happiest when she has a full house.

“I always like being with little kids,” she says. “They’re so much more interesting than adults. You get a lot of laughs from babies. They ask the most amazing questions, and you have to keep a straight face when you answer.”

Rose Marie is a stoic woman, a no-nonsense product of the Great Depression and World War II. She’s used to working hard without complaint, yet as she talks about children, she can’t stifle the slight smile that plays across her face. 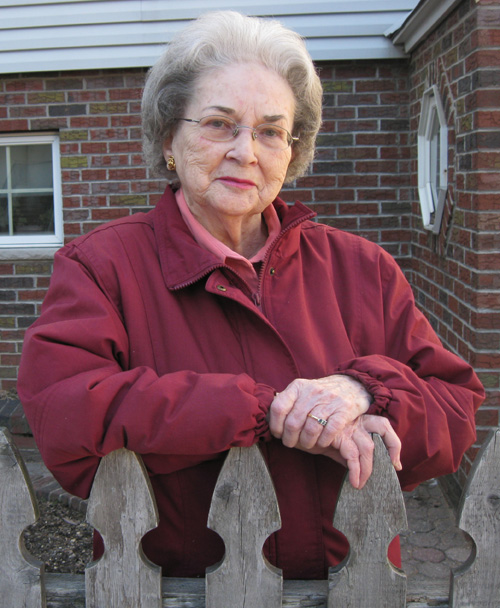 Photo by Nancy A. Ruhling
Rose Marie, mother of nine and grandmother of 11, likes a full house.


She was born in Astoria’s Doctor Daly Sanatorium — it’s now Mount Sinai Hospital of Queens — a year before the stock market crashed. Her parents, Irish immigrants, had met in New York. Rose Marie was the middle of six children, two of whom died in infancy.

The family had lived at several Astoria addresses before ending up on 29th Street. After living in that house, in 1947 they bought the one next door, which is where Rose Marie, except for a four-year hiatus, has lived since she was 19.

Rose Marie went to elementary school at Immaculate Conception a half a block away on 29th Street and Ditmars Boulevard. “We didn’t have much money, but we didn’t know we didn’t have anything,” she says.

After graduating from a Manhattan high school, Rose Marie got a job as a secretary in a Manhattan bank. Then she met John Prager, a handsome lad of German heritage who was a mechanical engineer.

“We had the same values, and we just clicked,” she says. “When he proposed, I said yes right away.”

When she had her first child, the couple moved into the 4 1/2-bedroom house on 29th Street with her parents and eventually bought it from them. “My parents lived downstairs, and we lived upstairs,” she says. “They stayed until they died.”

During the next decade and a half, Rose Marie had eight more children, a total of six daughters and three sons. “Our house was like a railroad station,” she says. “There was always someone coming up or down the stairs.”

She lists her children like a schoolteacher going down her class list — Maggie, Eddie, Patti, Jodi, Chrissi, Kitty, Peter, Rory and Jack. Has she forgotten anyone? No, that adds up to nine, everyone’s accounted for.

“My sister had eight children,” she says. “Neither one of us thought anything of it. We just did what we had to do. That’s how we were raised.”

Nine children meant doing at least six loads of wash a day and going to the market twice a week, pulling the produce home in a big wagon. Rose Marie, who has never owned a dryer, hung the clothes on the line, and when that wasn’t possible, hauled the wet clothes to the corner laundry.

“I enjoyed taking care of the house,” she says. “I never had the kids help me with the housework. I figured they had enough to do with their homework. Cooking wasn’t such a chore.”

It also meant getting everyone ready for school; as had their mother, the children attended Immaculate Conception.

“My girls had long hair, and I used to curl it every night,” she says. “I didn’t like to take the kids out unless they looked perfect. Their clothes were pressed, and their shoes were polished. I got used to going to bed at 3 a.m. and getting up at 7. And before the school got a lunchroom, everybody came home for lunch.”

Of course, money was tight. The children wore hand-me-downs, and sometimes Rose Marie saved up enough to buy new dresses at the synagogue’s sale. “The woman who was selling them used to save them for me because she knew I had so many daughters,” Rose Marie says. “She only asked me 50 cents for each.”

At Christmas, “my kids were lucky to get one present each,” she says.

Somehow, Rose Marie found time to volunteer at Immaculate Conception. “I used to help the teachers with the reading and math classes,” she says. “And this is the 48th year I’ve been teaching Sunday school. When my children were young, I used to bring them along, and they did their homework while I taught.”

She devoted herself to the Rosary Society — she even served as president — and, through the church’s Catholic Family Movement, helped found a preschool.

When the children were older, Rose Marie and John bought a nine-passenger Ford station wagon. “We called it the Blue Nun Car because it was navy blue, and we had bought it from the nuns at Immaculate Conception,” she says. “We used to ride to Rockaway to spend the evening. We packed sandwiches for the kids. I had to wait for John to take us. I never learned to drive.”

So happy and so busy was Rose Marie that she never even thought of having a career. “If I had worked, I probably would have gone into nursing or child care,” she says.

Nine years ago, as the Prager children were planning a 50th wedding anniversary party, John died after having bypass surgery. He was 76 and never had considered retirement.

“He was working in Rockland County, which is an hour away, and he got up every day at 5:30 to avoid the traffic,” Rose Marie says. “Our anniversary was only two weeks away when he died.”

Now, Rose Marie’s house is filled with grandchildren, whose ages are, well let’s see. She begins listing them in reverse order. OK, the oldest is 24; the youngest is 5.

“Kitty lives with me, and I always have some of my other kids staying here,” she says, adding that three of her children live in the neighborhood. “And the grandchildren are here all the time, too.”

“I could never leave Astoria,” she says. “It’s like small-town living in the city. You know everybody, and everybody knows you.”

Everything Rose Marie needs and wants literally is right around the corner. “I can’t seem to get off of 29th Street,” she says, not a bit of regret in her voice.