The sky’s weeping like a new widow, and Waterflow‘s listening to the soft, steady heartbeat of the whispering rain.

There’s a leak in the lobby of the Long Island City Art Center, where the up-and-coming rapper/hip-hop artist has his recording studio, and the water’s followed him, forming a shiny circle around his storm-cloud grey and black sneakers.

“Rain is wonderful,” says Waterflow, a big, broad boy of a man with bright black eyes. “All my life, I’ve loved water, and I’ve loved watching it. My motto is: Water — you might live without it but not for long.”

It was the water, in fact, that gave Waterflow life. Abdul Noori Jr. — that’s what the world called him before he became Waterflow a decade ago at 16 — spent a good chunk of his childhood watching the waves of the East River from his family’s Astoria apartment. 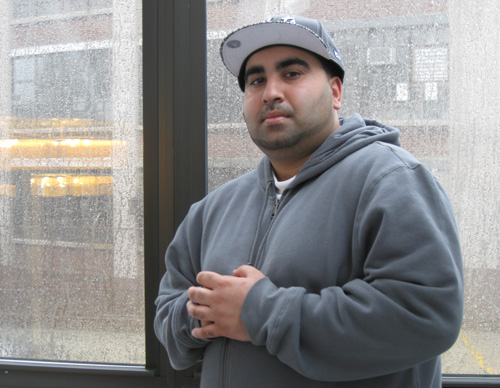 Photo by Nancy A. Ruhling
Waterflow revels in the rain.

It wasn’t long before Waterflow paired the rhythm of the water with the beat of hip-hop. By the time he was 10, he was putting poetry to music. “Music gave me the chance to express my feelings and to reach out to people and to let them hear my ideas.” he says.

When he was 17, he produced his first record. “It was recorded in a basement studio on my block,” he says. “The musician who lived there worked his magic and put a beat on it and put a headphone on me and I just did it.”

Soon, he was being played on college and underground radio stations, eventually releasing 10 records. His songs have gotten national and international play. “Pop It Back,” for instance, got 400 spins on radio stations around the country when it was released in June 2008, and 2007’s “Want That Water,” with Cassidy and Drag-on, was a hit with YouTube viewers around the world. (The 11th, “Monday Thru Sunday,” will be released this month.)

“I have enough material for 80 to 100 records,” he says. “I’m just waiting for the right time to release it all. My goal is to bring hip-hop music back to life.”

Waterflow’s rise in the music profession hasn’t been easy. His parents, who are from Afghanistan, came to New York in 1981 with their two young daughters. Eventually they would have seven children — Waterflow is the third child and the oldest son.

When Waterflow was a child, his father developed a number of medical conditions that prevented him from holding a steady job. At 14, his childhood was submerged: Waterflow became the chief bread winner.

“My uncle owns some fast-food restaurants, so I took a part-time job with him,” Waterflow says. “I did whatever he asked me to do — I worked as a busboy, I made deliveries.”

He saved every penny, sometimes as much as $20 to $30 per week, and gave it to his family. “I felt I had to help my mother,” he says. “She had younger kids to support. My goal was to raise enough to buy an interest in a business.”

At 20, that’s what he did. He became a part owner, along with his uncle, of Palace Fried Chicken & Pizza at 21st Street and Astoria Boulevard and opened his own music production business. “I was working so much that there wasn’t time for college,” he says.

Between his restaurant and his music business, Waterflow doesn’t get to kick back a lot. “I’ve only had one vacation in my entire life,” he says. “I went to the Dominican Republic for four days last year. I like to be on the water, and I have dreams of getting to jet ski again some time.” 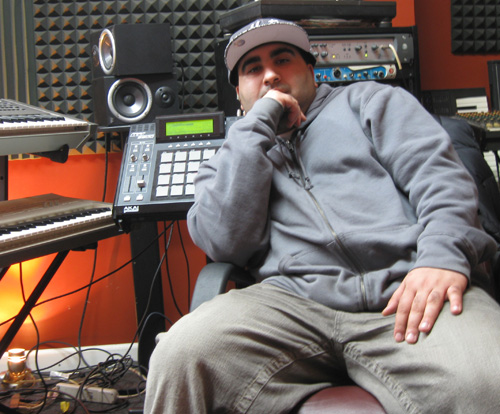 Photo by Nancy A. Ruhling
Waterflow’s second home is his studio.

It is religion and family that keep Waterflow grounded. “I believe in Islam; I’m a Muslim child,” he says. “I believe my religion makes sense, but I’m not a perfect child. I like to go out and have fun. I pray and go to the mosque when I have time but not every day. But I always have my religion in my heart. My faith keeps me humble and peaceful. I’ve learned to take everything as it comes.”

Waterflow believes that all his hard work will soon pay off. “My goal is to make a lot of money so I can do more things for my family,” he says. “I want to buy everyone their own house and car and whatever else they need and want.”

He’s making a move forward in that area. He’s looking to buy a house for his family. Although his two older sisters are married and his grandmother and great-grandmother live elsewhere, everyone else — Waterflow and his mother, father, two younger sisters and younger brother — share a rental home. “We want to stick together and help each other out, so we need to find a bigger place,” he says.

But what about Waterflow, what does he want? “I don’t want anything for myself; just seeing everybody else happy makes me happy.”

Yes, he can visualize that. He knows that the water will carry him there.

“I’m on the road to success,” he says, standing next to the ever-growing puddle. “I’m proud of what I’m doing.”

As if in assent, the rain pelts the windows, throwing buckets of water to punctuate his words.