In the back of Hellgate on the Park, virtually hidden behind the bar and the hanging baskets planted with plastic flowers, there are only a handful of tables.

It’s a good thing there aren’t more because Emilio Pino is always the only guy in the kitchen. Hellgate is Astoria’s Cheers, so it seems a bit pretentious to call Emilio the chef. Cook doesn’t sound quite right either. Let’s just say that he fixes the food.

Lasagna. Manicotti. Ravioli. And meatballs, oh the meatballs, the ones the menu declares are “the best in town.” The dishes are just like the ones Mama used to make when Emilio was a boy in Sicily. 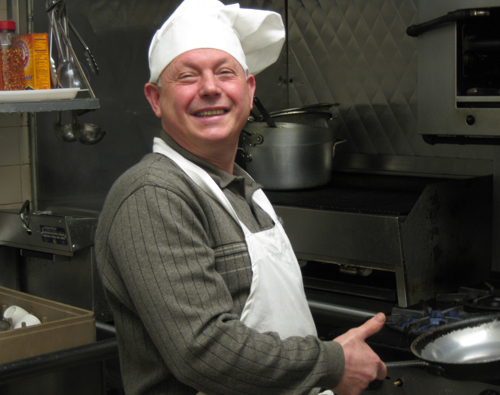 Photo by Nancy A. Ruhling
For Emilio, cooking is more fun than work.

“I never get tired of cooking,” Emilio says. “And I like to talk to the people here. But it’s very hard work, honey, because I’m all by myself. It’s tough to cook for so many people, especially if a party of 10 comes in. I have to get all the food ready at the same time.”

But for the past three years, Wednesdays through Saturdays 4 p.m. to 10 p.m., that’s exactly what Emilio has been doing. He’s a genial fellow who’s always smiling. When customers compliment him, he beams bashfully then pops back into the kitchen, where he readies the next dinner.

Of course, the work is all the harder because this isn’t his only job. Weekdays, he works 9 a.m. to 2:30 p.m. at Long Island City High School. Hey, life is good — he does get Sundays off, and there’s a five-week break from school every summer. “I’m the heavy-duty guy at the school,” Emilio says. “I take all the deliveries — the food, the paper, the trays, whatever comes in — and I clean the floors.”

His wages from the Board of Education are not enough to pay the bills, so when he found out about the part-time position at Hellgate, he jumped at the chance. He has just enough time to take a short break — and eat a quick bite at home — before he starts cooking at Hellgate at 4. 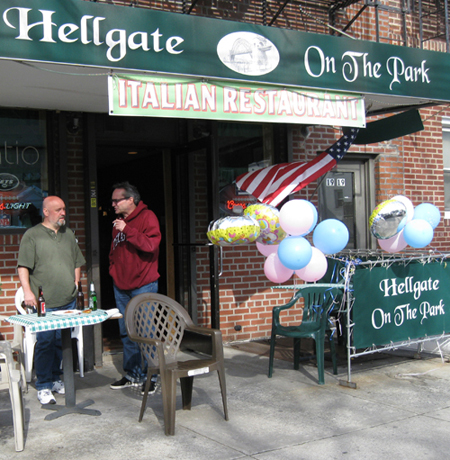 Photo by Nancy A. Ruhling
Hellgate on the Park is a bar that serves Emilio’s food.

For virtually all of his life, cooking has been Emilio’s passion and his profession. Emilio is one of eight children, and when things got tough in Sicily, his father came to New York to find his fortune. Emilio followed him when he was 14, and eventually the entire family ended up in Manhattan.

As soon as Emilio’s feet touched American soil, he started delivering pizzas to earn money for his family. “It’s tough when you come from the other side,” he says. “I didn’t know any English. I went to school, but I dropped out.”

What he did know was pizza, so he eventually became the owner of a series of pizza parlors named Pizza World, each of them on Queens Boulevard in Sunnyside. “I did everything,” he says. “I used to work seven days a week, 16 hours a day.”

By this time, he had a wife and four children to feed. But as sometimes happens, things didn’t work out. He got divorced, and he developed a major heart problem. After bypass surgery in 1998, he went to work for the Board of Education. “I needed a job with benefits,” he says.

It’s the cooking, though, that he really loves. “I used to watch my mother cook,” he says. “I never went to school to learn it, and I picked up a lot of things when I was in the pizza business.”

The meatballs — the ones everyone raves about — there’s no special secret. Fresh meat, parsley, garlic, grated cheese and a little salt and pepper. Ah, the bread crumbs he puts in them. They’re not prepackaged. Emilio makes them. “And I fry each meatball one by one just like we did at home,” he says. 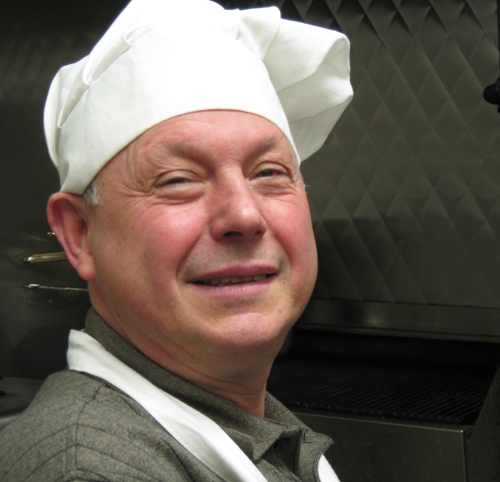 Photo by Nancy A. Ruhling
Emilio’s secret recipe: Service with a smile.

Emilio doesn’t eat out, and his girlfriend mans the stove at home. “Italian women are proud to take care of their men,” he says.

Five years ago, Emilio became an American citizen. It was one of the momentous moments of his life. “It was exciting,” he says. “I studied for the exam, but I was still nervous. It was the right thing to do because I had lived in this country for so many years.”

When the time comes, Emilio will give up his full-time job, but he doesn’t want to leave Hellgate. “I’m not going to retire yet,” he says. “I’m a hard-working guy, and I love to work. I need another five years at the school, but the people here are like a family. We all hug and kiss each other, and then everybody goes their own way.”

As the dinner hour approaches, Emilio surveys his tables, which are covered, practically, with red-and-white-checkered plastic cloths. He sighs and looks just a little tired.