There’s a pigeon flying overhead when Eugene and Kaori Oda open the front door. And another. And another. Three in all. They land in the living room, where they’re sitting in a row on the sofa, which is protected by a pair of plastic tablecloths printed with pictures of autumn leaves.

Eugene rolls up a desk chair and sets a roll of toilet paper on the glass-topped coffee table. You never know when or where Troy, Nini and Lucky are going to let one fly.

Pigeon poop, Eugene explains, isn’t the squishy stuff you see smeared on car windshields. No, if you feed the birds the proper food, pigeon seed, the poop pops out like plump raisins.

There’s always a lot of it. 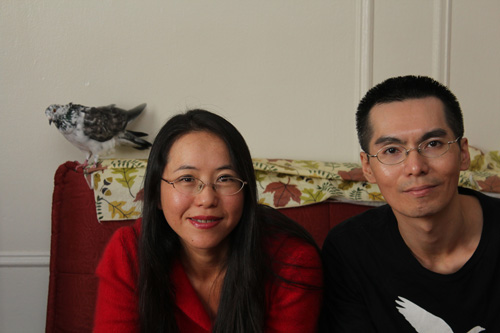 Photo by Nancy A. Ruhling
Eugene and Kaori are birds of a feather.

This is important shit to know because Eugene and Kaori are housing two dozen rescue pigeons in their one-bedroom apartment. Troy, Nini and Lucky, who are their pets, are the only ones allowed free flight. The others are in cages or carrying cases and will be released once they are well enough to wing it.

“People think pigeons are rats with wings, but they are charming creatures,” says Eugene in all seriousness. “Each one has its own character.” 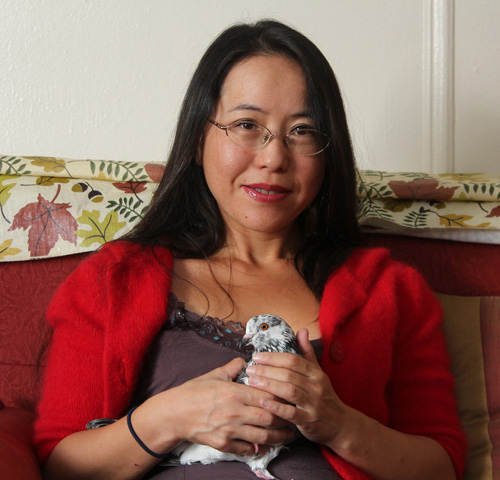 Photo by Nancy A. Ruhling
Kaori is a native of Japan.

It’s people, not pigeons, who have given the birds a bad rap, Kaori adds. “The birds are the innocent ones,” she says. “People treat them badly and harm them without even knowing it.”

Something as insignificant as a piece of string or a strand of hair can cripple pigeons when it gets tangled in their webbed feet.

Troy, a blue bar, has a crushed right wing so he can’t fly long distances; Nini, a grizzle, has been with them since she was a baby and doesn’t know how to survive in the wild; and Lucky, a checker, has neurological problems — watch her long enough and she’ll start twisting her head like a corkscrew for no reason. That’s why Eugene and Kaori are keeping them. 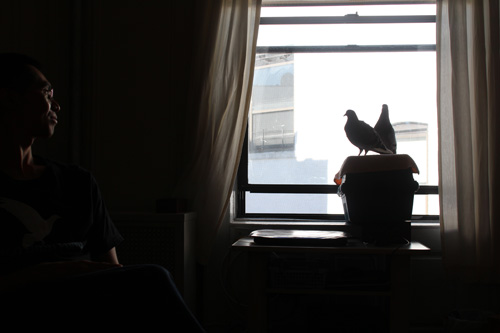 Photo by Nancy A. Ruhling
Eugene sits in the shadows, pigeon watching.

Something stirs the trio, and they take a swift swoop, fluttering with all their might. If anyone ever films a sequel to Hitchcock’s The Birds, these guys should get starring roles.

Eugene, thin and tall, and Kaori, petite and pretty, remain unflappable during this spontaneous flight.

The 36-year-old Eugene, who was born in Chicago to Japanese parents, has lived all over the world.

Kaori, 37, is a native of Japan. They met at Boston University, where they earned degrees in international relations. After they married, they moved to Astoria, where they make their living as stay-at-home freelance translators. 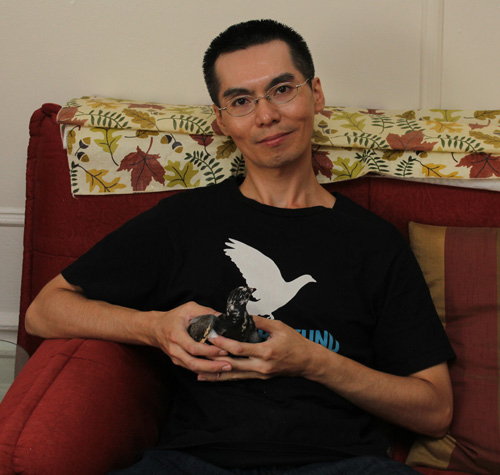 Photo by Nancy A. Ruhling
Eugene sees beauty in the birds.

They never paid much attention to pigeons until a couple set up housekeeping in their neighbor’s air conditioner.

“It looked so beautiful,” Eugene says. “The male brought the branches, and the female made the nest.”

They met their first injured pigeon three years ago. It had taken refuge under a food-vendor’s cart, and they decided to take it home. For care instructions, they sought help from the Wild Bird Fund, but the bird didn’t make it. 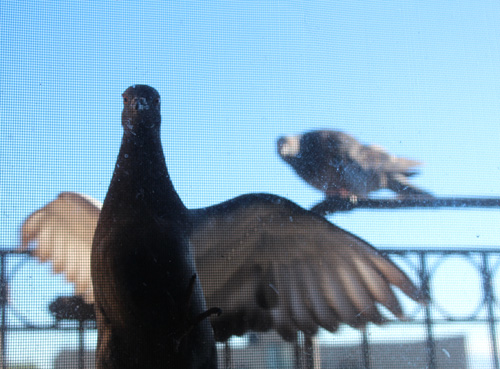 Photo by Nancy A. Ruhling
Pigeons, hearing the coos in the bedroom, peek in from the balcony.

“It was very sad,” Kaori says. “We buried it in Astoria Park under a small tree.”

Soon, they were picking up other pigeons.

“It started as a hobby,” Eugene says, adding that they recently became New York State licensed wildlife rehabilitators. “But it became a mission for us.” 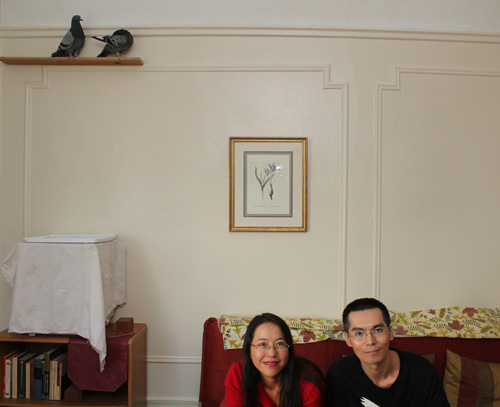 Photo by Nancy A. Ruhling
Two couples: Eugene and Kaori and Troy and Lucky.

Of course, there were adjustments that had to be made. The apartment had to be pigeon-proofed. They removed the sharp objects, books, decorative items and even the ceiling lights and their bulbs.

The sick birds are quarantined in the bedroom, so Eugene and Kaori sleep on a futon in the living room. It doesn’t seem to bother them. 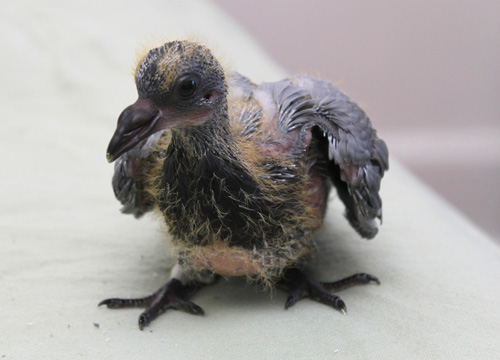 And they had to change their schedules. They get up to the sound of coos at 5:30 a.m. By the time they feed the flock, change the newspaper carpets in the cages, dole out medications and do rehab on little limbs and wings, it’s close to 8.

“Some of the birds can’t eat on their own,” Kaori says. “And the babies need food every three to four hours.” 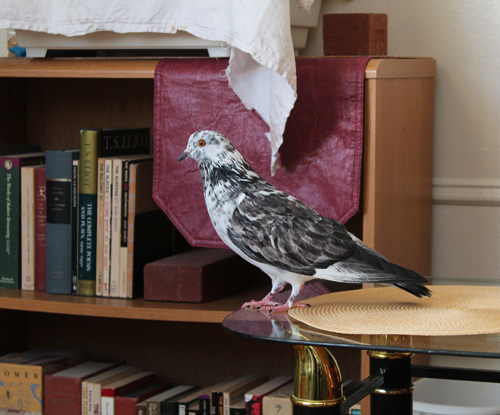 Photo by Nancy A. Ruhling
Nini takes a stance on the coffee table.

In between work projects, they pick up poop and clean the apartment, which is kept operating-room clean. By 10 p.m., they are more than ready to head to their futon. 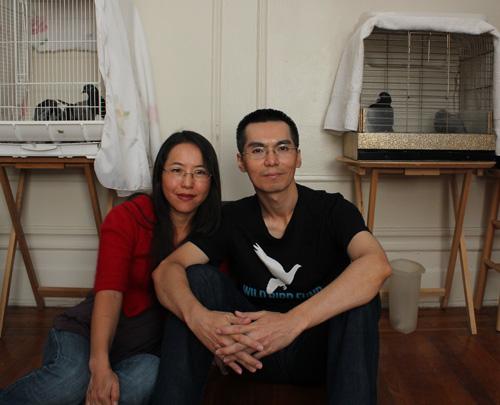 Photo by Nancy A. Ruhling
Eugene and Kaori hope to open a bird sanctuary.

“We don’t go out much, and we have no regrets,” Eugene says, adding that they’ve never added up the costs of the care. “This is our only entertainment and pleasure.”

Eugene and Kaori usually keep 10 pigeons, so with 24, it’s getting a little crowded. They dream of the day when they can give the birds more wing room. They’d like to build a bird sanctuary in Astoria.

“We’re going to keep going,” Eugene says. “We want to save as many as possible.”

Troy, Nini and Lucky stare at him approvingly from their living room perches.