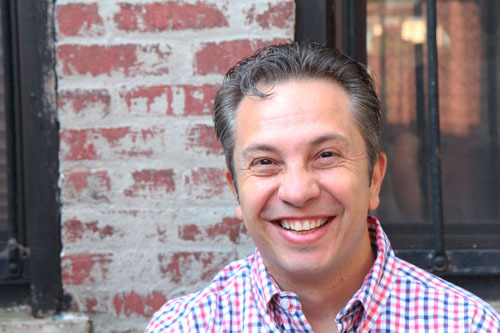 When he hears it, he knows he’s home. Home is City View Pharmacy, the business he founded nearly a decade ago in a building that’s old enough to be his grandfather.

Harry, sanguine and solid, looks up at the tin ceiling. It, too, carries the weight of time. He could have covered it with acoustic tile, but he painted it welcome white instead.

“City View is all about caring, and I wanted my customers to feel cozy when they stop in,” he says. 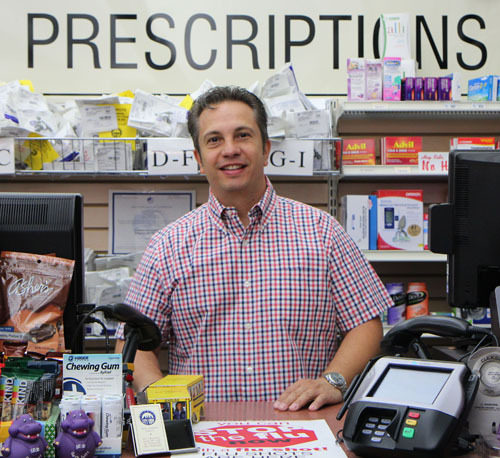 Photo by Nancy A. Ruhling
Harry manning the pharmacy counter.

As he walks down the center aisle, the creaking is joined by a chorus of “Hi Harrys.”

A half dozen customers who count themselves as members of the City View family are crowded around the pharmacy counter in the back.

City View only has 1,000 square feet, and their 12 feet make the space looked packed. Some are waiting in wooden chairs while Harry and his staff fill their prescriptions. 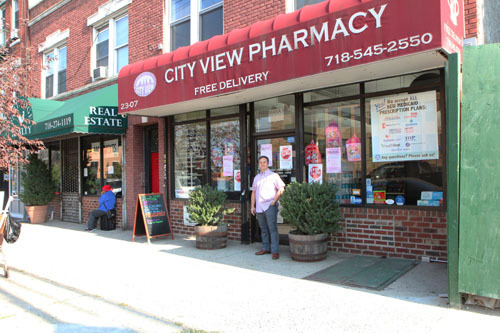 Photo by Nancy A. Ruhling
City View was established in 2006.

Before it gets too busy, Harry orders breakfast. For himself and his staff. When the food arrives, Harry covers the bill just as he does every morning.

In case you didn’t figure it out from his last name, Harry is Greek. He was born in the city of Pyrgos. When he was only 40 days old, his parents boarded a ship for Manhattan and settled on the Upper East Side.

Harry was pretty much left to fend for himself in what he calls a “tough, working-class neighborhood.” 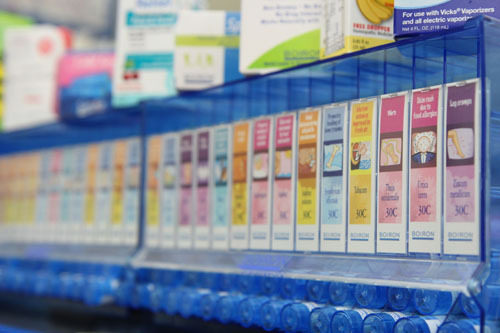 Photo by Nancy A. Ruhling
City View is small, but the inventory is large.

His father opened a coffee shop, and his mother worked part time as a seamstress. Harry had his own key to the apartment. He let himself in after school.

By the time he was in third grade, his parents moved the family, which now included a daughter, back to Greece, a choice that didn’t set well with Harry. As the years passed, he became resigned to his fate.

He was jolted to the core when his father moved the family back to New York five years later. 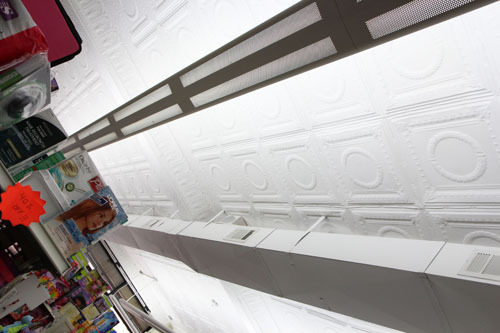 Photo by Nancy A. Ruhling
Harry kept the tin ceiling and painted it white.

“My mother and I spent every summer in Manhattan,” Harry says. “I was her interpreter. At the end of that summer, we moved back here. I didn’t even get to say good-bye to my friends. I was 14. I was skinny and short. I got picked on at school a lot.”

Harry was a pretty good student so he made his way to college. Nobody else in his family had ever done that.

“I worked three jobs to put myself through,” he says. “I didn’t want to bother my parents with the bills.”

He wasn’t sure what he wanted to major in, but after talking with a friend of the family who was a pharmacist, he decided to try that. After graduation from Long Island University, he worked in several pharmacies. 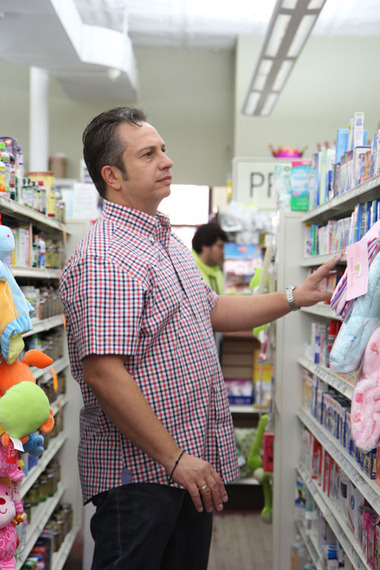 Photo by Nancy A. Ruhling
Harry filling a customer’s order.

During that time, he got married, divorced and married again.

“A friend introduced me to Angie, my second wife, and we hit it right off,” he says. “She had a cold, and as an excuse to see her again, I brought her some cough drops the next day.”

Harry realizes, after some prodding, that this sounds wildly unromantic. He shrugs.

“She worked at a flower shop, so I couldn’t give her flowers,” he says. 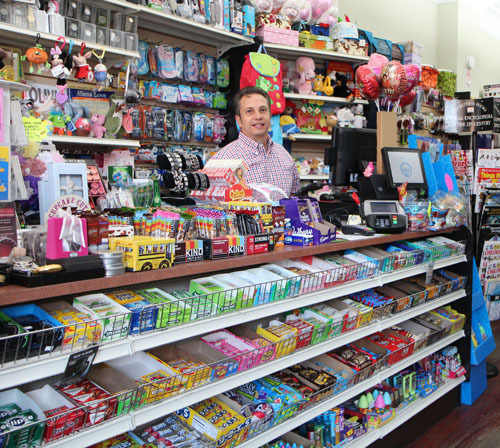 The drops worked on her throat and their relationship. Angie, who also is on staff at City View, and Harry were married in 2000. They have two sons: Demetri is 10, and Panagiotis is 5.

“I really love doing this,” he says, “because I get the chance to make people feel better.”

City View takes a community view. Harry knows his customers by name and makes free deliveries to the five boroughs. 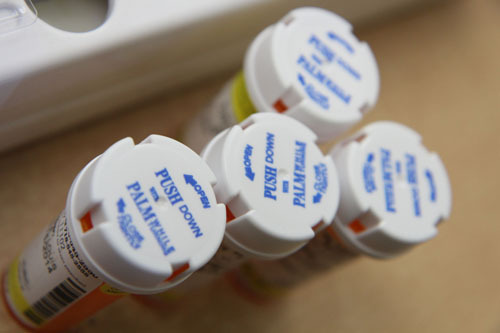 You’re likely to see him filling a prescription in the back, heading to the front to ring up a pack of gum then getting into his car to take medication to a customer.

“I do whatever I have to do to provide quality service,” he says.

Sometimes, he admits, City View takes up too much time.

“I haven’t been to Greece in eight years,” he says. “And I only take local vacations and only one week at a time.” 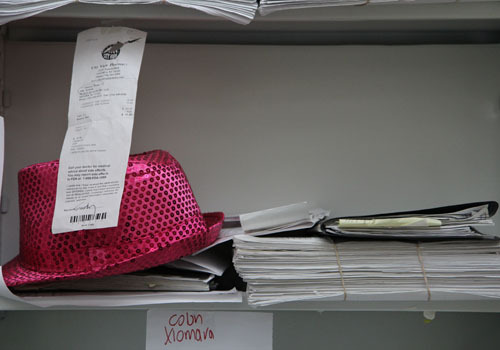 Photo by Nancy A. Ruhling
A fancy hat from the shop’s birthday party.

He owns three properties in Astoria. In addition to owner, he plays the role of handyman.

He coaches Demetri’s soccer team and cooks with Angie.

When he really wants to kick back, he parks himself in front of the TV set and watches car races. Aside from some lessons from Skip Barber, that’s as close as he gets to the track. He’s usually behind the wheel of his Volvo XC90 or 2001 E-Class Mercedes. 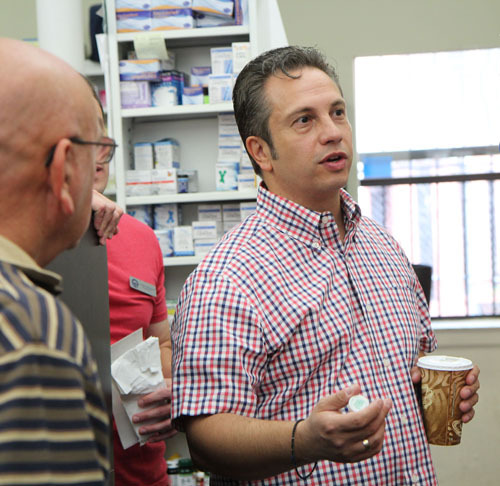 Photo by Nancy A. Ruhling
Harry working with customers.

Harry is philosophical about the future. The pharmacy industry is changing at a rapid rate, and mom-and-pops like City View are becoming endangered species.

“I believe that everything happens for a reason,” he says. “I have no plans to open another pharmacy. I want to concentrate on City View and make it right. I’m grateful and blessed to have what I have. If you work hard and believe in something, it will happen.”

A customer comes up to the counter, and Harry shakes his hand heartily. He takes the order in Greek.