In a corner of the bedroom, on a tiny table, Evgeniya Bavaeva sets up her portable Brother sewing machine. 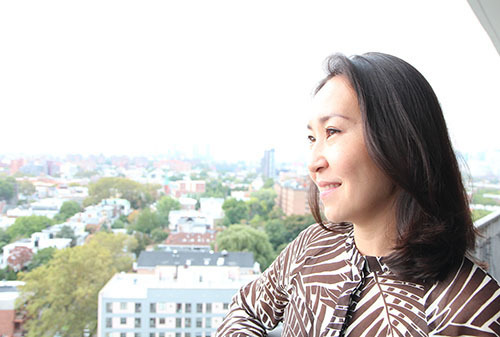 Photo by Nancy A. Ruhling
Evgeniya is from Russia.

It’s always at night, usually at 10, after her 3-year-old daughter, Celine, is in bed and while her husband, Serafim Ferdeklis, is working at his restaurant, BZ Grill.

She listens to Ludovico Einaudi on her headphones to drown out the rhythmic sound of the needle marching through the fabric. 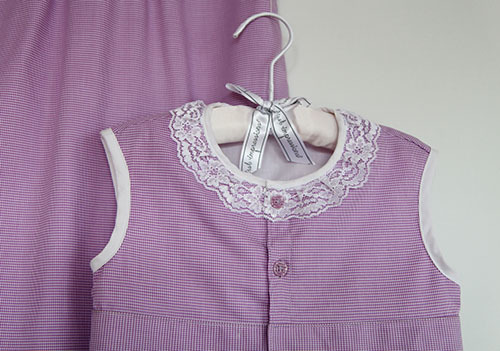 Photo by Nancy A. Ruhling
A MiniCelini dress made from a man’s old shirt.

It hasn’t always been this way. Although Evgeniya has been sewing all her life, it is only in the last year that she set up her own business.

MiniCelini, which is named after Celine whose nickname is Celini, began when Serafim got a spot of oil on his brand-new blue-and-white checked Ralph Lauren button-down dress shirt. 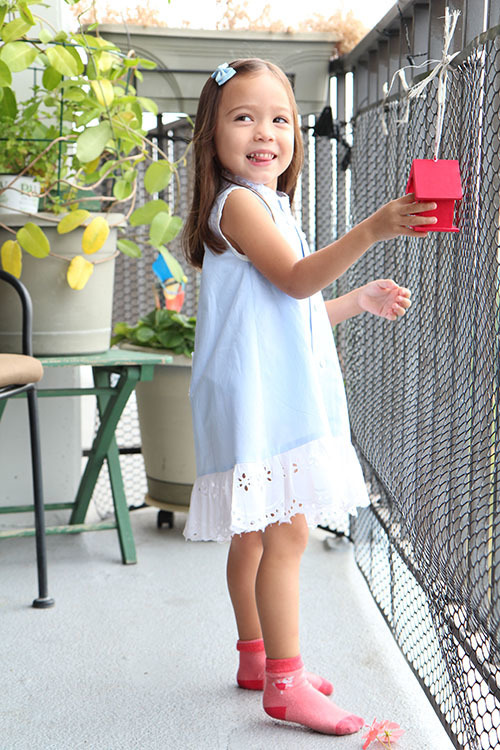 Reluctant to throw it away, Evgeniya, who is tall and trim and elegantly at ease, fashioned a dress for Celine from it and showed off the results on Facebook.

People were charmed by the idea of daddy-daughter outfits, and friends started sending her old shirts to redesign into dresses.

“These dresses, made from fathers’ and even grandfathers’ old shirts, create memories,” says Evgeniya, a lifelong recycler. “It’s like the daddy is hugging his daughter.” 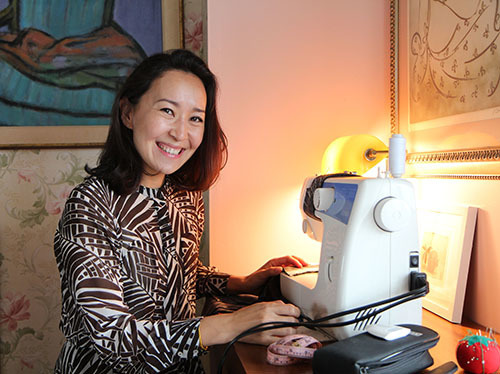 Photo by Nancy A. Ruhling
Evgeniya sews in her bedroom.

Each bespoke design is dictated by the style of the shirt the client supplies.

“I look at the details on the shirt and get a feel for the fabric,” she says, adding that each takes four to six hours to complete. “I don’t use a pattern. I create as I work. I sew the lace on by hand. And I turn over the edges of the seams and sew them by hand so they feel good against the child’s body.”

Celine, who is wearing a light blue MiniCelini dress with giant puffy white ruffles around the hem, and Serafim, who is sporting a blue-and-white striped Ralph Lauren Polo shirt, are playing on the couch. 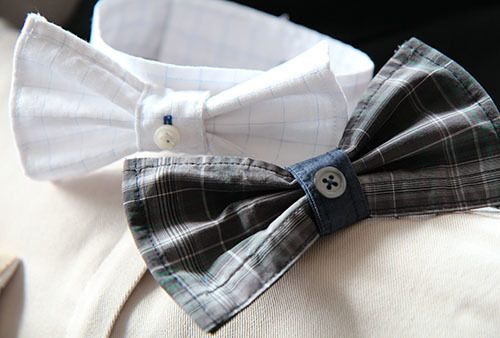 Photo by Nancy A. Ruhling
The line includes ties and hair bows.

He’s teaching her magic tricks and watching while she fills in her coloring books.

Serafim, who was born in Baltimore and lived on the Greek island of Rhodes from age 5 until 2002, met Evgeniya, who was born and raised in Russia, through friends.

They speak to Celine in Russian, Greek and English. 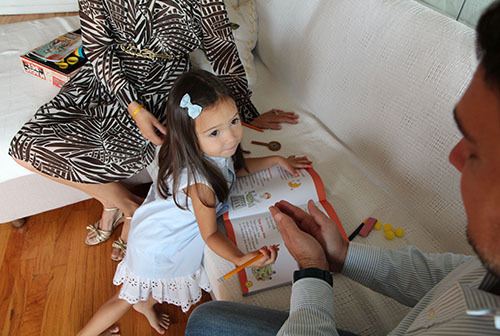 Photo by Nancy A. Ruhling
Celine having a play date with daddy.

“I understand Greek well because I took lessons, but there is still more to learn,” Evgeniya says. “Now that we have Celine, Serafim is trying to learn some Russian.”

MiniCelini, which also makes boys’ vests and bow ties and girls’ hair bows, is a natural outgrowth of Evgeniya’s career in the fashion industry and of her upbringing in Russia’s Republic of Kalmykia.

“My mother was a seamstress,” she says. “I was always playing with the leftover fabrics. I started out making doll clothes and eventually designed outfits for myself.”

In 2004, after earning a bachelor’s degree in social work from Moscow University, Evgeniya came to New York City to study psychology at Baruch College. 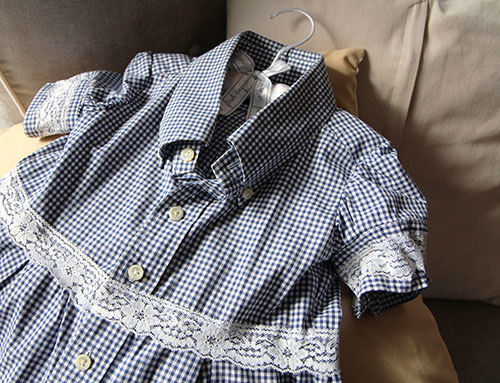 Photo by Nancy A. Ruhling
The first shirt-dress Evgeniya made.

It was the fashion scene, however, that turned her head.

“I used to walk around the garment district,” she says. “I kept asking myself how I could be a part of it.”

She rounded out her Baruch schedule by taking classes at the Fashion Institute of Technology, eventually earning degrees from each institution.

After internships at Carolina Herrera and Eileen Fisher, Evgeniya took a job at designer-brand wholesaler Fleet Street, where, among other things, she worked on the Ivanka Trump label. 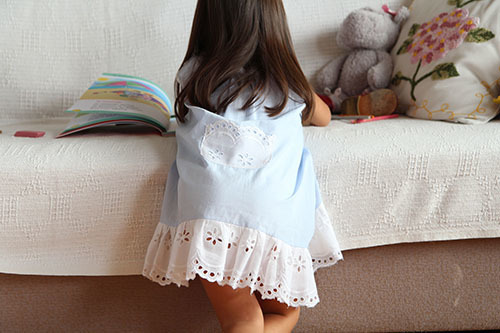 Photo by Nancy A. Ruhling
The back pocket covers a tear in the shirt.

After Celine was born, she tried to work full time but found the balancing act too difficult to maintain, given that both sets of grandparents live out of the country.

“We like to dress the same, and I didn’t like to throw away the leftover fabric,” she says, pulling out a pair of dark brown skirts they recently wore for a special occasion.

Now that Celine is 3 (but likes to think she is 5) and attends Greek and Montessori school, Evgeniya has begun taking freelance fashion assignments.

“MiniCelini was a hobby, a pleasure, but now it’s taking a new turn,” she says, adding that someday she would like to open a boutique. 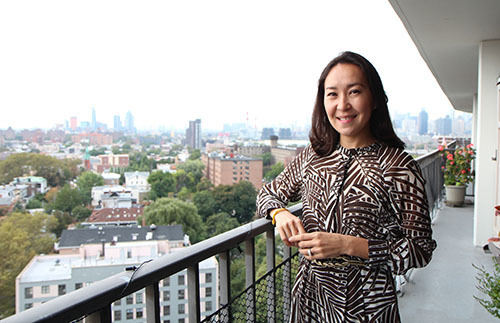 Photo by Nancy A. Ruhling
She’s teaching Celine to sew.

She’d also like to teach children how to sew.

“My mother was too busy to teach me,” she says. “But I was always around when she worked and learned from observing.”

Celine is her first pupil. She already knows how to turn on the sewing machine.

Sometimes, she sits on her mommy’s lap and watches in wonder as the needle bobs up and down.