The first thing you see in Mark A. Thomas’ apartment is the Roland digital piano.

It’s big and black, and you have to dance around it, as Dick Van Dyke did with that pesky ottoman, to get into the living room without tripping over it. 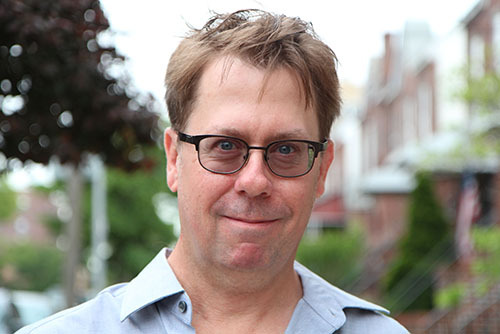 Photo by Nancy A. Ruhling
Mark’s official occupation is artist.

Actually, it would be more accurate to call the living room an office because, aside from a dark brown faux-leather slouch couch, a 70-inch flat-screen TV and a computer with dual flat-screen monitors, its only contents are three enormous flat-top desks and a bookcase crammed with piano songbooks.

The Early American-style drawered desk — the one that weighs a ton and almost didn’t make it up the stairs to Mark’s second-floor walkup — is a thrift-shop find. It wears its $350 sales tag like an Olympic medal.

Mark, who is 48, has lived in this one-bedroom apartment for 17 years.

He has a lot of interests (music performance, composition, photography, forensic genealogy and web development) and collections (old photos, receipts, pay phone numbers and hundreds of volumes of The Etude magazine).

He also possesses an off-site storage space full of other items too numerous to enumerate or recall without prompting. 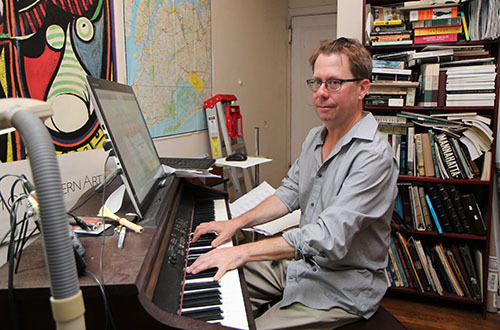 Photo by Nancy A. Ruhling
He took his first lesson at 8.

About those interests: It’s hard for Mark to pick only one.

“What do I call myself? On my income tax returns, it says I’m an artist,” he says. “But that doesn’t convey the scope of what I do. I guess I should change it to creator, but that sounds a little too God-like.”

Mark, who has the cadenced voice of a radio announcer and lawless brown hair, also uses the room as a recording studio to give voice to the notes that spring from his brain to his fingertips.

“Playing the piano gives me a visceral connection to my body,” he says. “I feel at one with the instrument, and my body goes nuts if I can’t play for a couple of weeks.”

An Army brat who spent his early childhood in Ghana then Laos, Mark and his family settled in Tampa, Florida, when he was in second grade.

The family’s evacuation from Laos in May 1975 when the civil war ended is still a vivid memory.

“My older sister and I were plucked out of school at mid-day by our mother, and the next thing we knew, we were back at the house throwing everything we had, including the piano, into large crates,” he says. “We were the first Americans out; it was so jammed with local people on the ferry that our car was hanging off the edge of the boat.” 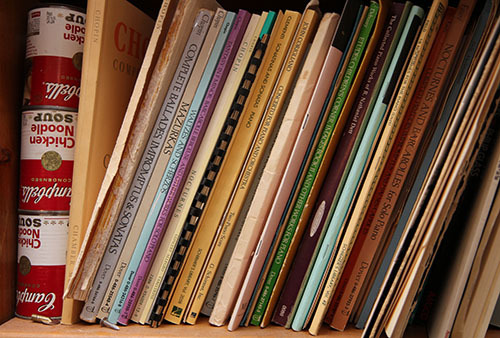 Photo by Nancy A. Ruhling
Chopin and chicken soup.

Mark had no longing to play piano or, for that matter, any other musical instrument. He took lessons at age 8 simply because his sister was mastering the 88.

“I wanted to be better than her at everything,” he says, grinning.

By the time he was in high school, he was taking college-level courses in music. At Oberlin College, he earned a degree in piano performance and made his way to New York City. 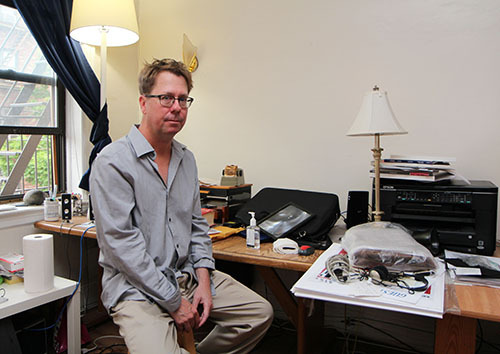 Photo by Nancy A. Ruhling
Mark composes and records in his living room.

He saw himself as a concert pianist/composer with a steady day job, possibly in radio. He tried out a few positions and in 1995 settled in as a webmaster for Sports Illustrated, eventually becoming a product development director for Time Warner.

In 2001, when he was laid off, he decided to devote himself full time to his musical and other pursuits.

For a while, he assembled hundreds of thousands of pay phone numbers from around the world, encouraging people to call them and have conversations with the strangers who answered their unsolicited rings. 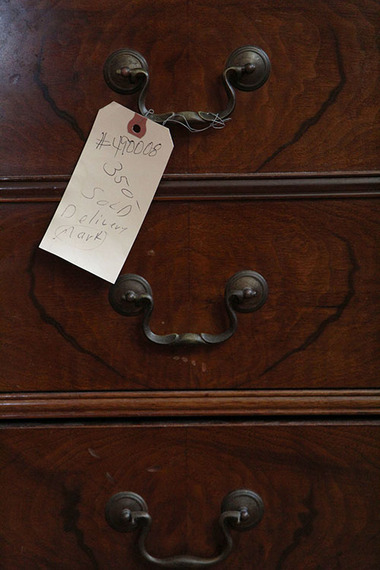 To this day, if he hears a street musician and there’s a pay phone nearby, he records it.

That project, which he started as a high school student, led to his ventures in forensic genealogy.

It turns out that people who are pay phone fans also like to fill in the branches on their family trees so they hire Mark to take photos of their ancestors’ New York City gravesites.

He became fascinated with abandoned baby carriages, discarded umbrellas and tombstone portraits and goes around the city photographing them. 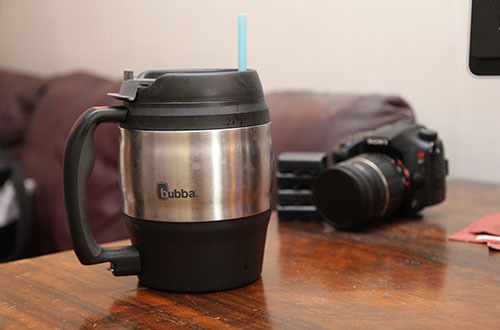 Photo by Nancy A. Ruhling
A jug of ice water gets Mark through his day.

At some point, he began scanning his receipts and posting them online to illustrate the passage of time.

Generally, he spends his days walking around the city. It’s not unusual for him to devote six hours per day to his double-digit treks.

There’s a scale in his office next to his songbooks. He steps on it to check his weight. He likes to keep to a trim 160, which, with all the walking, should be a cinch. 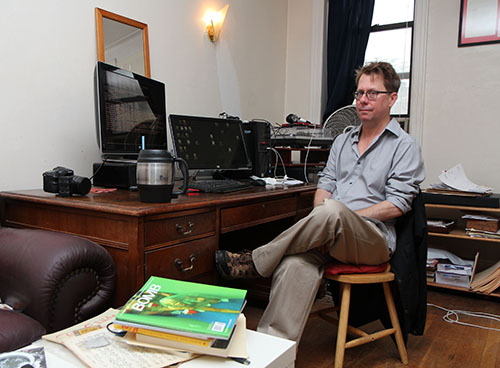 Photo by Nancy A. Ruhling
By night, he’s a web developer.

He turns on the TV and tunes in to the live traffic cams. He finds this more fascinating than series, which he doesn’t watch.

At night, he does his steady-paying job, web development. Sometimes, he doesn’t get to bed until the sun comes up. 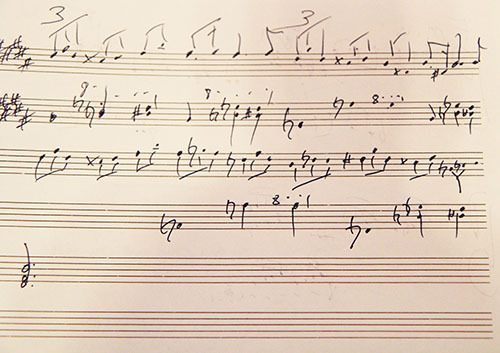 Photo by Nancy A. Ruhling
A composition in the works.

Mark has heard other people talk about it but otherwise has not had much opportunity to experience it first-eye or even second-eye.

Composing and playing fill in the gaps in his syncopated schedule of 24/7 nights/days. 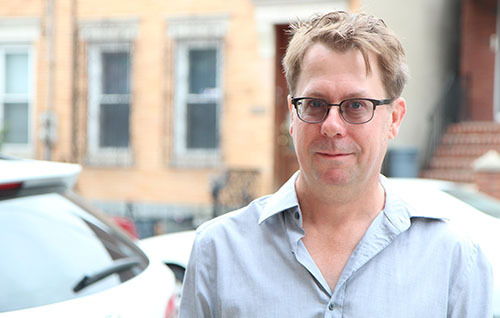 Photo by Nancy A. Ruhling
Watch and listen: Mark is working on more projects.

“I try to write music every day,” he says. “Recently, I spent the whole day playing other people’s pieces on the piano, but when I finished, I considered it wasted time because I could have been writing.”

When he was in college, Mark wrote a fan letter to the great pianist Vladimir Horowitz. The personal reply is framed and hangs in the center of his office as inspiration.

Mark ploughs through a pile of papers on one of his desks and produces an 8 ½ X 11 copy of a Guest Check from a restaurant. He has a whole bunch and thinks they’re so interesting that he’s planning an exhibition.