It’s a warm, sunny day, so 2-year-old Ani is dancing around the apartment in anticipation of playing outside.

Her mother, Christine Serdjenian Yearwood, has piled the little girl’s unruly ringlets onto the top of her head and has managed to get her to stand still long enough to strap on her sneakers. 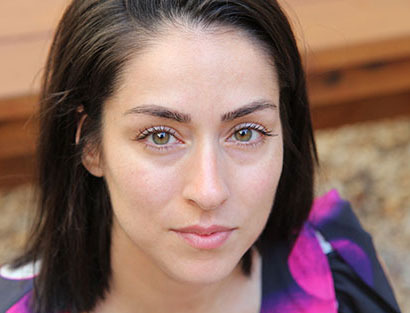 Photo by Nancy A. Ruhling
Christine became a mother two years ago.

They are pink. Ani, who is holding a baby doll, likes them because they are covered in sparkly sequins and light up when she walks.

Since Ani came into the picture, Christine’s life has changed in ways she never would have imagined.

Shortly after bringing her daughter into the world, Christine gave birth to a business. 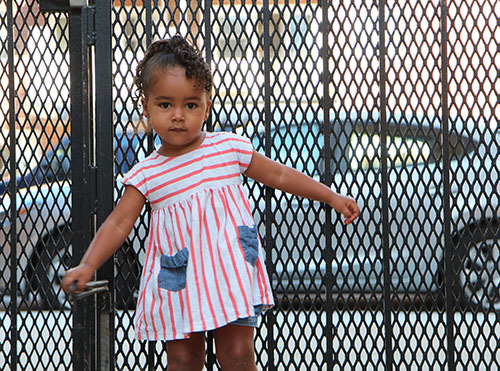 Photo by Nancy A. Ruhling
Ani at play.

Ani’s younger sibling is named UP-STAND, and it’s dedicated to getting people to STAND UP to make public spaces and transportation safer for pregnant women.

“Don’t get me wrong,” Christine says. “I had a great pregnancy. I didn’t have any of the bad symptoms like dizziness, backaches, leg cramps, headaches, blurry vision and nausea that you hear about, but a lot of other women I met in my moms’ groups did.” 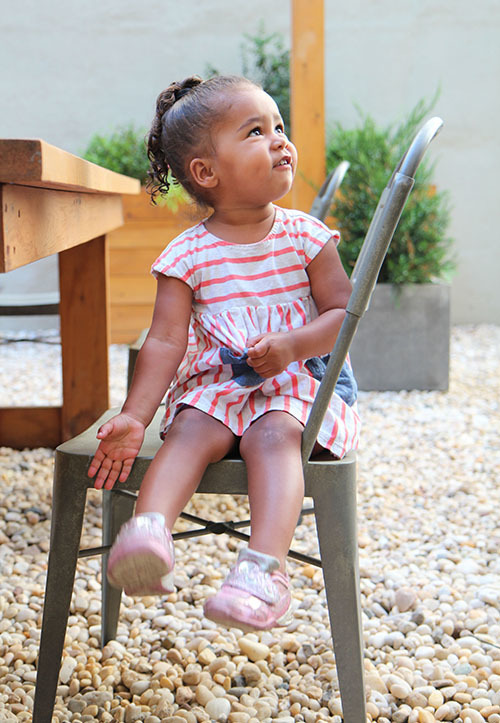 Photo by Nancy A. Ruhling
Ani looking at Mommy.

This is not to say that she didn’t have any issues. There was more than one time that she was taking the subway into Manhattan to work and would have been grateful for the seat that no one ever offered.

“I wasn’t comfortable asking people to get up,” she says, “because I thought that the person sitting may have a greater problem than I.” 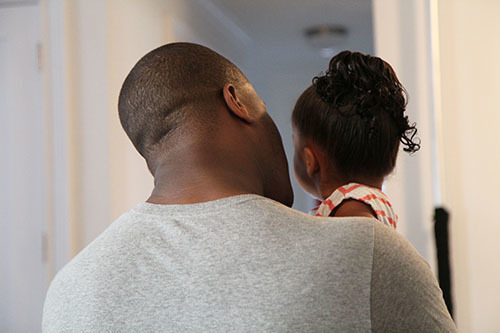 Photo by Nancy A. Ruhling
Daddy and daughter.

That’s why she came up with the idea of creating an educational campaign that would make it easy for expectant moms and their supporters to connect without conversation.

UP-STAND sells awareness pins – “Pregnant? Take My Seat” and “I Stand for Expecting Moms” – and signs for businesses.

In a sense, Christine has been preparing for this socially conscious entrepreneurial venture virtually her entire life. 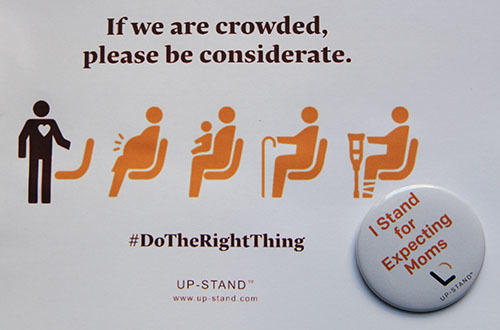 Photo by Nancy A. Ruhling
UP-STAND pins and signage.

Growing up in Waterville, Maine, as the youngest of three, she had no early opportunity to view the progress of a pregnancy.

She did, however, have a role model: Her mother, a teacher, successfully went to arbitration to force the city’s public school system to allow her to use sick days as maternity leave instead of taking a pay cut.

Her father, a soccer coach at Colby College, also played a key role in her future development.

Christine took up the sport at age 4, and her travels in England, Italy, Austria, Germany and Switzerland as a member of Brown University’s varsity team further cemented her ideas of feminist empowerment. 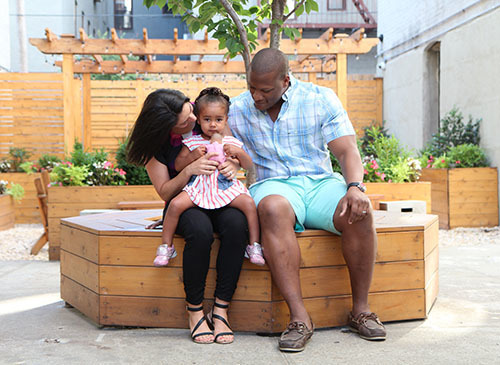 Photo by Nancy A. Ruhling
And Ani makes three.

“I saw that other countries recognized pregnant women,” she says. “I was partially inspired to create UP-STAND by other countries that encourage women to advocate for themselves and use ‘baby on board’ buttons.”

None of this would have happened had she not gone to Brown.

“Many of my Maine classmates were from low-income families and did not go to college,” she says. “I was fortunate because my parents had steady jobs, and I got the opportunity to go to an Ivy League college.” 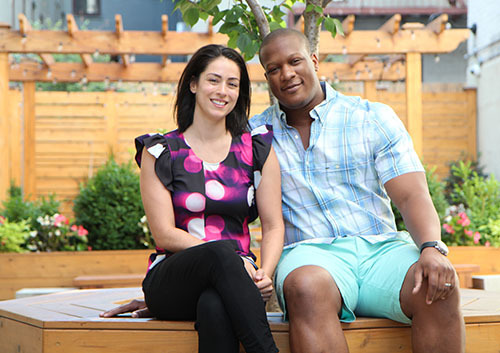 Photo by Nancy A. Ruhling
Christine and Jose met at Brown University.

Equally influential was her 3-month stay in Armenia through the Birthright Program, which she did to honor the heritage of her paternal great-grandparents who were from Turkey.

Still, the import of her experiences did not hit home until she and her husband, Jose Yearwood, were expecting Ani.

Christine and Jose, who is a vice president of institutional equity sales for JP Morgan Chase, met at Brown.

He proposed on the rooftop of Astoria’s Studio Square NYC in Long Island City, and they married in 2012 after she earned a master of science in teaching degree in English as a Second Language from Pace University and a master’s of education in higher education from Harvard. 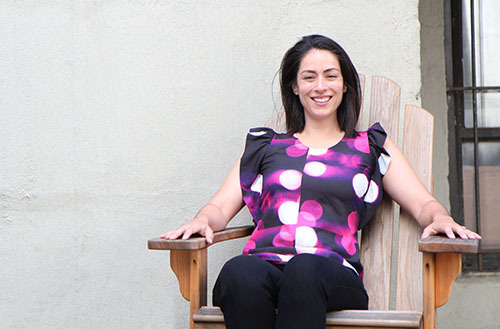 Jose, who tried out for the NFL, is the son of Panamanian immigrants who settled in Spring Hill, Florida.

Christine had had a number of jobs, including a teaching and then a staff position at Teach For America.

When she got pregnant, she was working at Yeshiva University, coaching women’s soccer and overseeing its Title IX compliance. 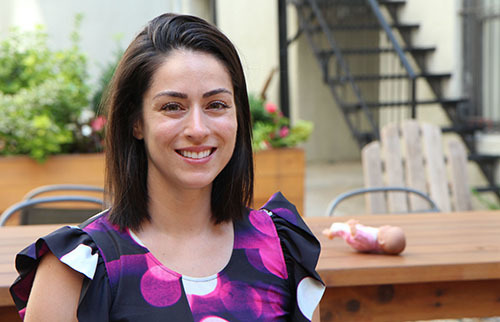 Photo by Nancy A. Ruhling
She wants to make public spaces safe for pregnant women.

“This was a great experience in pushing for things that students wanted and respecting the boundaries of the people in place,” she says.

Although she took a yearlong maternity leave, Christine decided not to return.

“Jose works from 6 a.m. to 6 p.m. then entertains clients at night,” she says. “The Yeshiva job also included night work, and I didn’t want Ani to be raised by a nanny.” 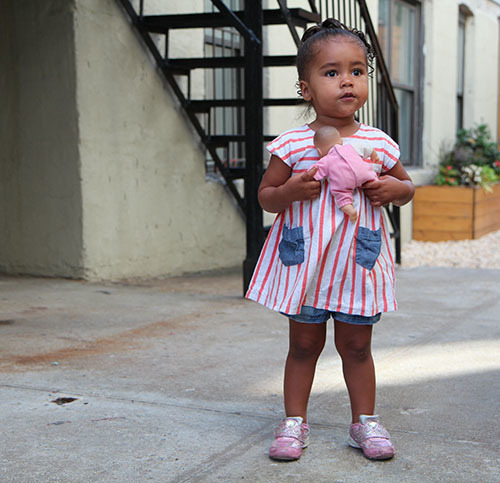 Photo by Nancy A. Ruhling
Ani with her baby doll.

Jose, colossal and calm, and Christine, comely and convivial, invested a portion of their savings to get the company up and running and send Ani to a day-care center three full days a week so Christine has time to develop UP-STAND.

Christine wants to create a national UP-STAND community, but right now, she’s focusing on areas closer to home, getting local businesses and obstetricians and gynecologists to join the movement.

“I’d like to see my signs in waiting rooms, laundry rooms and on the subways,” she says. 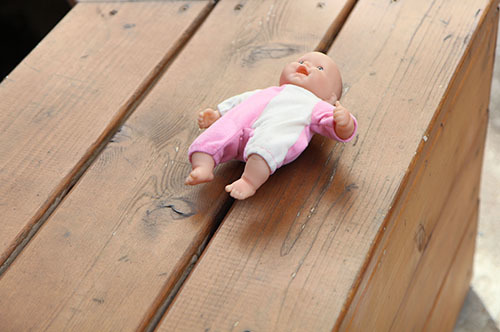 Christine doesn’t know whether UP-STAND will take off or where it will take her.

“Since I’ve had a child, I’m much less certain about everything,” she says. “I would love for this to be my career. I’ll see how it goes.”

Ani, who’s trying to get Christine’s attention, drops her baby doll on the table.

She runs, her pink princess sneakers shooting sparkling stars along the ground in front of her.