The colorful cardboard art on the walls is dwarfed by the baby grand piano. Dave Smith, who made the paintings, plays his rhapsodies religiously. For the last year, his fingers have been feeling their way through Bach; the black-dotted sheet music from his latest recital is still spread open on the stand. 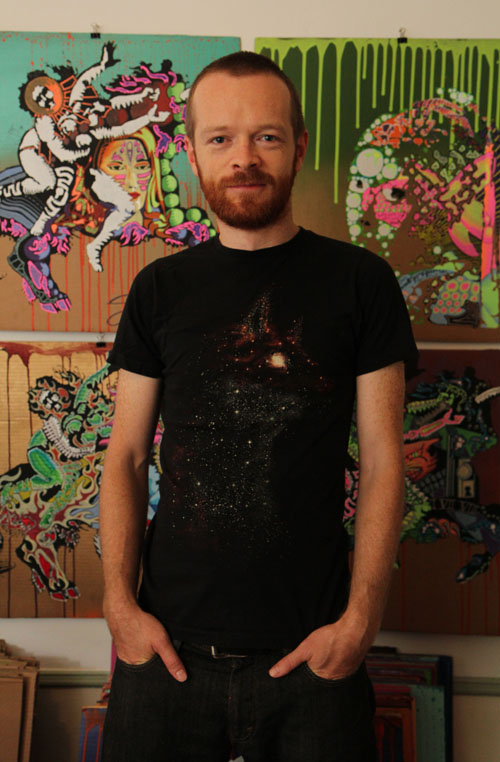 Photo by Nancy A. Ruhling
Dave shows his art on street signs.

Actually, music was Dave’s first love, the one he fell for before he started posting poemed pictures on Astoria street signs over the summer.

“I have a real strong need to show off for people,” he says. 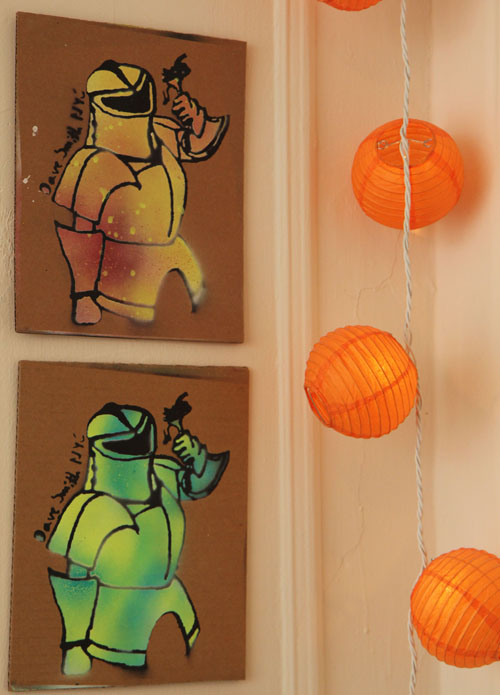 Photo by Nancy A. Ruhling
Dave fuses ideas to create his art.

Dave, the son of a piano teacher and a guitar player, was born in Canada and grew up in Wisconsin. He cut his teeth on the ebonies and ivories, a practice that also sharpened his eyes. When it came time for college, he gravitated toward the steady rhythm of math, crafting a creative career for himself in software development.

It was life that put art on the back burner: Dave got married, moved to Astoria and had Odin, the precocious 4-year-old who has taken up residence on the piano bench. 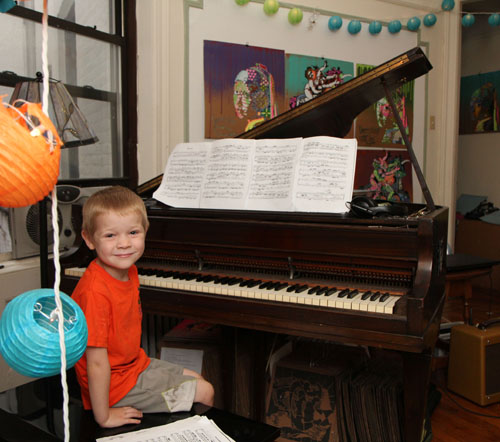 Photo by Nancy A. Ruhling
Odin doesn’t play yet, but he’d like to.

“I can’t play as many notes as my dad,” Odin says. “But would you like to hear them?”

He begins banging. Dave, a cerebral gingersnap who is barefoot, bearded and blue jeaned, had his first lesson at 7, and he’ll start Odin at that age, too. 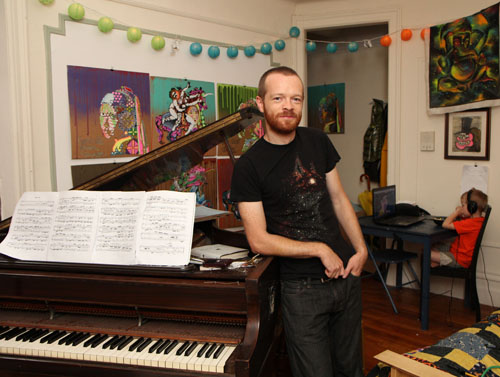 Photo by Nancy A. Ruhling
Dave boned up on Bach for his recitals.

“I started to make more art a year ago, and then I did a reverse Lent,” he says. “I took up something I had neglected — art — and made one painting a day for the 40-day duration. I gave each one away.”

If 40 were good, he reasoned, 5,000 would be even better. With that in mind, he quit his job in May and turned the second bedroom of his apartment into a paint room. He began painting full time with the help of an assistant.

His works are stenciled, with spray paints and cheap, pedestrian household paints, onto 1-foot-square pieces of corrugated cardboard he buys online. He makes 50 of each design. 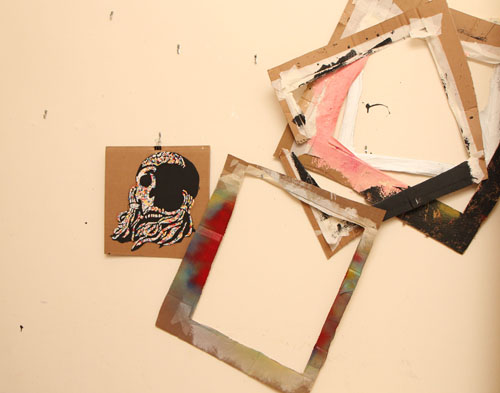 Photo by Nancy A. Ruhling
A work in progress.

The eclectic images include cats, fish skeletons, shrouded skulls, turtles, eagles, iconic busts and flowers. Sometimes, he tapes a poem or an essay on the back.

“People seem pretty grateful for the free art,” he says. “I always get some emails and tweets when I put more up.”

It takes 350 works to blanket the neighborhood, and Dave does the hanging in one-hour spurts of 50. He hopes to finish putting up the last of the 5,000 by the end of October. 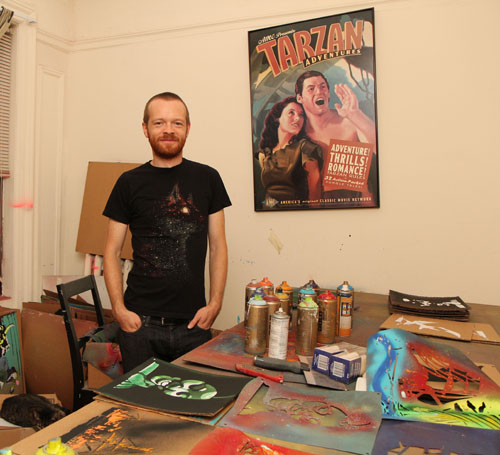 Photo by Nancy A. Ruhling
Dave in his paint room.

If some of the images look somewhat familiar, it’s because Dave draws them from “re-mining a lot of old art, which is what hip-hop did for music, to create my own separate, beautiful ideas.”

These ideas have all but overtaken the apartment. The works that aren’t tacked up on the walls are stacked under the piano and wherever there’s some free floor space. The wall of the bedroom — what Odin calls “our room” — is papered with them.

Odin, who spends half his time with Dave and half with Dave’s ex-wife, thinks it’s all great fun, even if some of the painted skulls do scare him. He fetches his orange and yellow Nerf gun and shoots them down with velvet-soft bullets that ricochet off the walls. 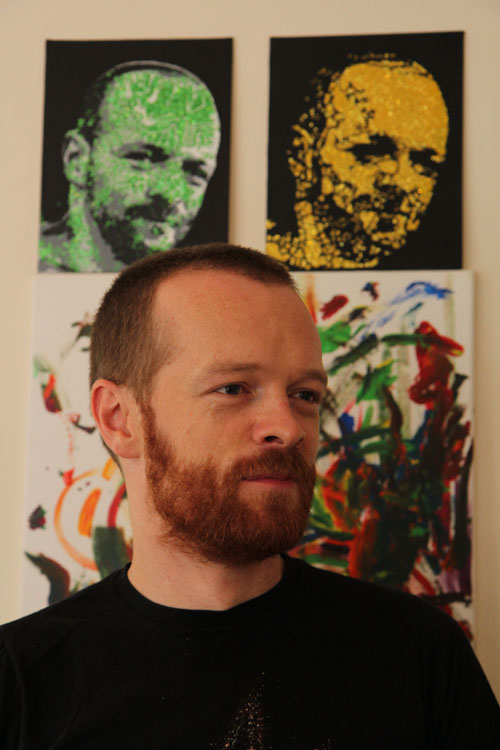 Photo by Nancy A. Ruhling
Posing with some self-portraits.

Dave’s project to bring free art to the public has come at a sizable cost: He’s spent $10,000 of his own money so far. That’s OK with him because the art of his summer off has provided him with a life lesson.

“I’m trying to communicate with people,” he says. “I was asking myself, ‘How do I go about being informed and happy because there are a lot of upsetting things going on?’ The answer, for me, is that you have to have a sense of humor.”

The project has made Dave a neighborhood celebrity, but he’s not letting fame go to his head. The idea of being a full-time artist doesn’t strike him as viable, which is why he’ll be starting a full-time job with Google at the end of the month. 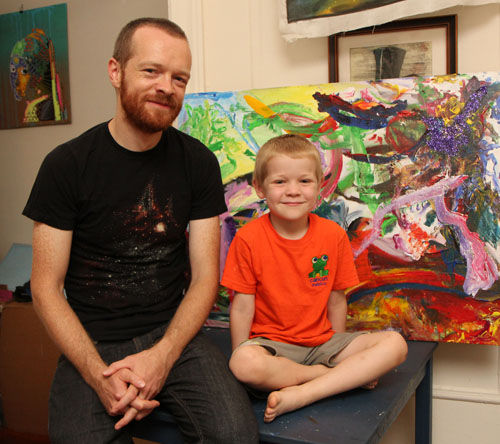 Photo by Nancy A. Ruhling
Dave and Odin with a painting they made together.

“I’d be flattered if someone else copied my idea,” he says.

Dave isn’t the kind of guy who keeps a list of goals stored on his hard drive, and he doesn’t know where this art project will ultimately lead him.

“I might try to do something on a grander scale,” he says. “I have a million ideas.”