And it’s highly unlikely that you’d recognize his face. 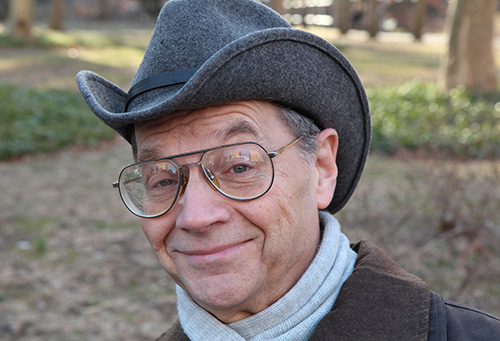 Neal is an actor and a lawyer.

There’s good reason for this.

Although Neal’s acting career has spanned more than four decades, it has, for the most part, played out on small stages in out-of-the-way states, where dinner often is served with theatre.

Don’t feel you should be upset about Neal’s lack of fame or fortune. He certainly isn’t.

In fact, he thinks it’s fantastic that he has had so much fun doing what he loves.

The amount of money he hasn’t made? It’s hilarious. 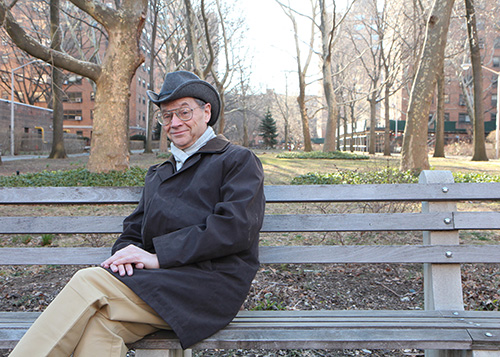 He quickly gave up his legal career for the stage.

“I had a small speaking part in Woody Allen’s 1998 film Celebrity, and I did a few lines in the 2016 film Indignation that ended up on the cutting-room floor, but I still get residuals,” he says. “The checks literally are for a penny. The payment is about four cents, and they take out three cents for taxes.”

The “big money” comes from stage roles and on-site film-shoot pay. He tosses out some dollar amounts that start at $100 to $200 a day. They sound OK until he points out that there might only be a day’s work per week.

“It is entirely possible that you could be making more on an unemployment claim than taking a low-end acting job,” says Neal, a short, slim man, who when you squint hard enough bears a slight resemblance to Woody Allen.

The pleasure of performing, he insists, is the real reward. 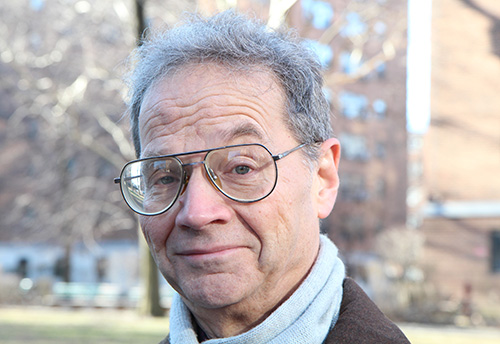 He had a short speaking role in Wood Allen’s 1998 film Celebrity.

Show business runs in Neal’s family. His uncle, Elliot Arluck, was featured in the 1945 film A Yank in London and co-wrote the Off-Broadway musical Meet Peter Grant.

The music to the song “Over the Rainbow” from The Wizard of Oz was composed by Harold Arlen, who, Neal is proud to note, happened to be born Hyman Arluck.

“Elliot once ran into Arlen’s brother at the musicians’ union, but they couldn’t trace a direct relationship,” Neal says. “Many years later, I mentioned that to Harold’s son when I met him. I refuse to believe that we weren’t at least distant cousins.”

Despite the family history, Neal started out practicing law instead of lines.

Neal, who was born in Brooklyn, moved to Astoria at such a young age that he doesn’t even remember the transition.

At 6, when his parents divorced, Neal and his mother went to live in Far Rockaway, and when she remarried, they settled in a large house in Brooklyn’s Prospect Park South, where Neal’s sister and brother were born.

Neal spent his summers at camp, where he staged theatrical productions. He set that interest aside to study law.

“I worked on John Kennedy’s presidential campaign doing things like stuffing envelopes, and I wanted to go into politics,” he says. “A lot of politicians back then had law degrees, so it made sense to me.” 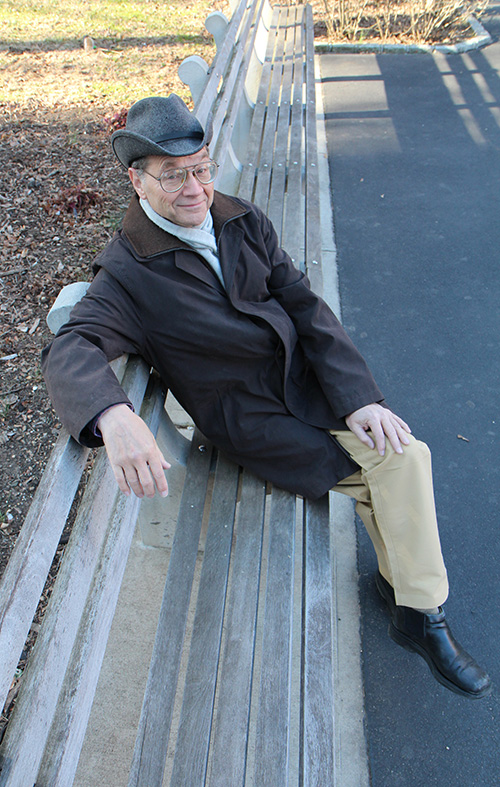 Did you notice him in the 2016 film Indignation?

“But the more I went, the more I discovered I didn’t want to do it,” he says. “I worked for a couple of months at a small corporate law firm, but I got bored out of my mind.”

While he was considering switching to legal journalism – he loved being the editor of NYU’s law school newspaper – he got a full-time job as the in-house counsel for a record and music publishing company.

Six months later, when that position was eliminated, Neal enrolled in the American Academy of Dramatic Arts.

“The big name in my class was Kim Cattrall who went on to star in Sex and the City,” he says. 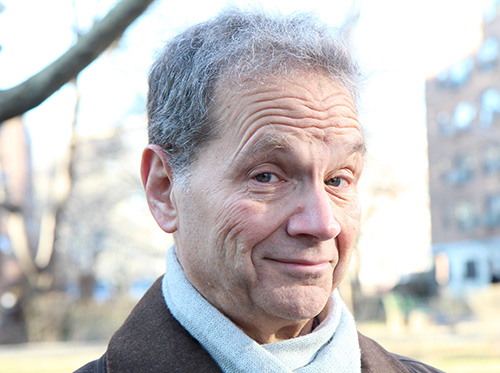 His first job – as the Woody Allen character in a stage production of Play It Again, Sam – took him to Mobile, Alabama.

That role led to a decade-long gig with a newly formed theatre company in Manhattan.

“I started out as the business manager and became managing director of the theater,” he says. “Occasionally, I got to be in the shows, and I kept doing the paralegal work.”

When the company folded, in the late 1980s, Neal took up acting again with abounding enthusiasm.

“I was forced to go back on the stage, which is where most of my experience was and still is,” he says and grins. “I started getting lots of out-of-town work.” 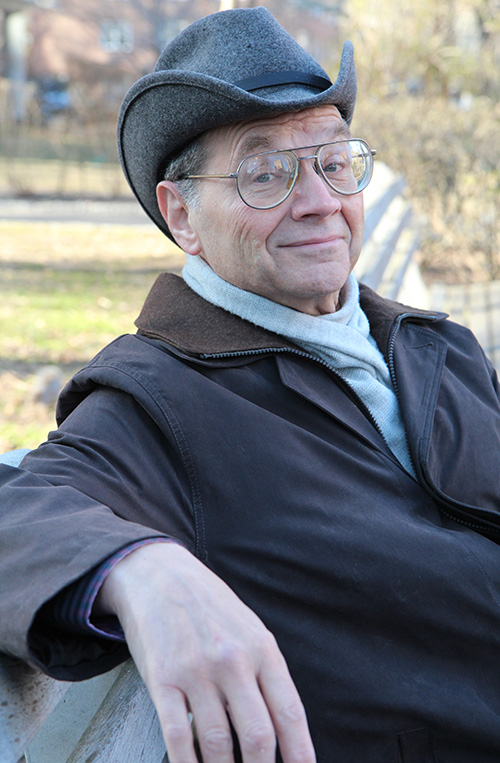 Acting? It’s for fun, not money.

In addition to regional theatre, Neal also won roles in Off-Broadway and Off-Off-Broadway productions. He got so busy that he dropped the legal work.

At 71, he still looks forward to every audition. He has several lined up for summer productions.

“I’m collecting a pension from Actors’ Equity and Social Security, which meet my minimal needs,” he says. “Anything else that comes in is mad money.”

When he’s off the stage, Neal devotes much of his free time to his Queensview co-op: He’s the chairman of the board and recently signed on as editor of the complex’s newsletter.

His devotion to the development is logical. Aside from short absences, he’s lived in the same two-bedroom unit for most of his life. 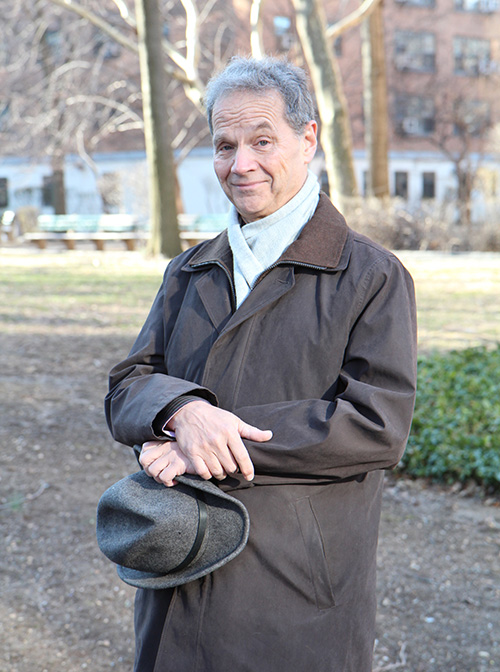 He glances around the living room. In the corner, there’s a piano his mother gave him money to buy in the mid-1970s when he took over the co-op from his father.

As a child, he took lessons from Theodore Harris, Elliot Arluck’s brother-in-law, but the instrument now serves as a pedestal for his flat-screen TV.

The walls are hung with original Al Hirschfeld caricatures, and shelves hold too many CDs to count or catalog.

Actors of Neal’s caliber are expected to come dressed for the part in contemporary scenes, so he rarely throws anything away. The goggle-eye glasses he’s wearing are from the 1970s; he still can see out of them, sort of. 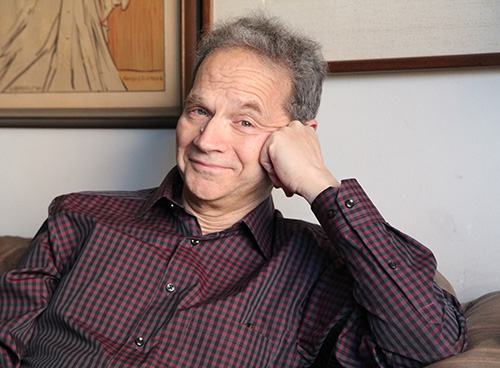 Look for him in Motherless Brooklyn.

When he cleaned up the living room, he misplaced his current spectacles so he’s using these until the others turn up. He also has a pair of black horn-rims from the 1960s.

He wore them for a shoot he recently did with Alec Baldwin for the film Motherless Brooklyn, which is set in the 1950s.

He didn’t have a speaking part.

But between takes he and Alec traded stories about the Woody Allen films they have been in.