When Lou Romano Trujillo looks out over the tables at Chick-N-Soup, all he can think of is his good fortune.

“I’m a lucky guy,” he says, “because of the people – family and friends – who helped me open it.” 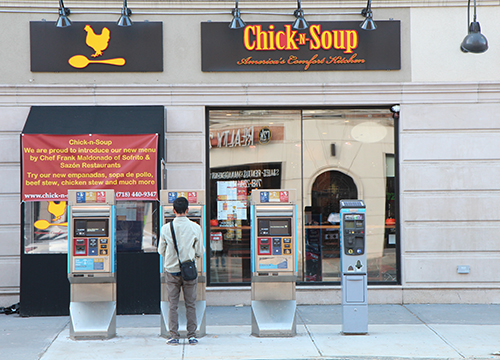 He mentions his mother (“an extraordinary woman who raised me by herself”), his landlord (who encouraged him to take on the renovation and gave him a really good deal on the rent), his uncle the electrician and his uncle the carpenter (who plied their trades on the place) and the two noted chefs (who took him and the menu under their marinated wings).

“I’m just so grateful,” he says. “I get emotional just talking about it.”

Lou, a sometime boxer who owns Popeye arms and a shiny, shaved head, starts to choke up. 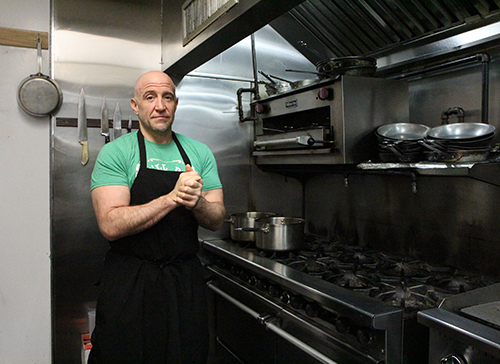 Lou didn’t discover cooking until he was about 30.

“We just celebrated our first anniversary,” he says. “I put everything I have into it – nearly all my savings — and then borrowed money and borrowed on top of that.”

Lou, who is 46, has done a lot of different things in his life – he started working at 17, and like his mother, has held multiple jobs simultaneously — but Chick-N-Soup is his most ambitious and adventurous project.

Lou, who was born in Astoria, has spent most of his life in the neighborhood. His mother gave birth to him right after her 18th birthday and quit school to take care of him.

“My parents were high school sweethearts,” he says. “They met when they were 15.” 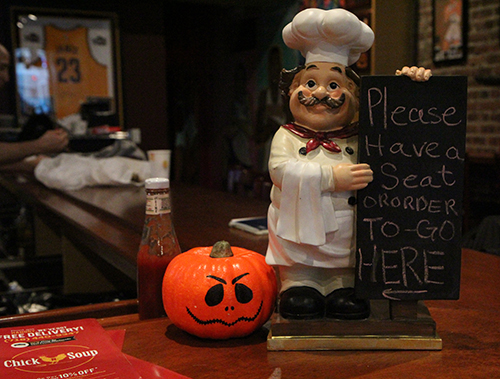 His father, a native of Cuba, joined the army.

“He got in some kind of trouble – I think he was trying to sells guns to make money – and he was incarcerated,” Lou says. “He was a good dude, he just made a lot of mistakes trying to support us. When he got out, I was about 12, and he did come back into my life, but my parents never got back together.”

Lou and his mother moved to Connecticut, where she worked night and day while earning a college degree.

“My mother used to take me to her classes,” he says. “We were there for five or six years, but we always came back to Astoria for Sunday dinner and holidays at grandma’s.” 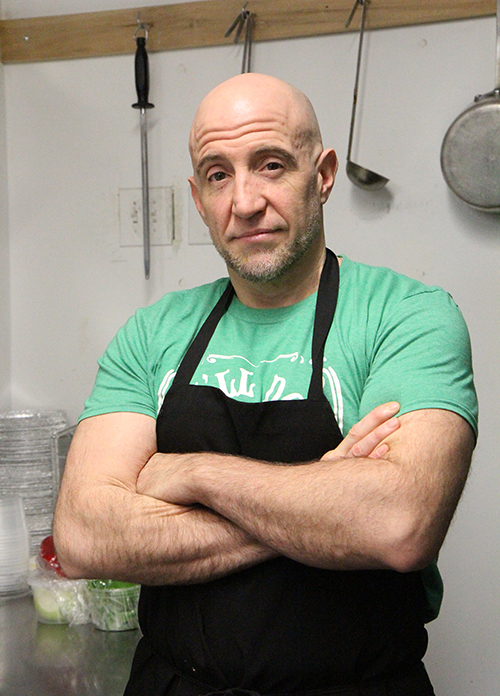 His first restaurant, The Lunch Box, was three blocks away from Chick-N-Soup.

While Lou was at St. John’s Prep, he started working for Anheuser-Busch, a job he kept when he enrolled at LIU Post on Long Island.

“I didn’t get a degree in any subject,” he says, “but I got a degree in life. Some of the people I met there are still my friends.”

By the time he started taking courses at Hunter College – “I never worked toward a degree, I only took classes like psychology that interested me” — he was working not only for Anheuser-Busch but also selling real estate and DJing at a chic Manhattan club. 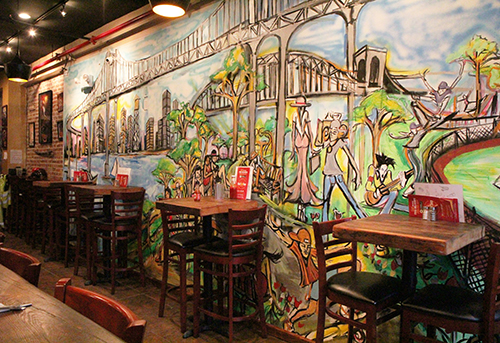 Chick-N-Soup shows off its neighborhood vibe.

Given his varied and numerous pursuits and the fact that he didn’t know the difference between a spoon and a spatula, Lou seemed an unlikely candidate to open a restaurant.

But he was friends with Jason Bunin, who, at the time, was the Knickerbocker hotel’s executive chef.

“He took me into the kitchen,” Lou says. “It was intoxicating.” 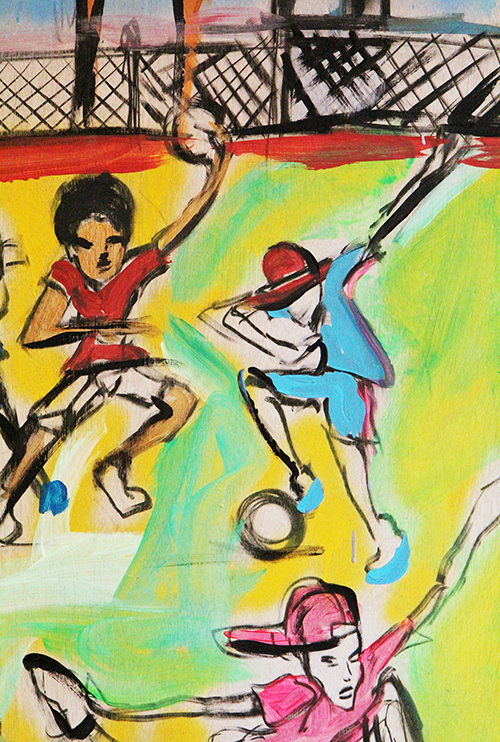 A detail of the mural, which features Astoria Park.

In his free time from his full schedule, Lou volunteered to “trail” Jason and started prepping food and whipping up batch recipes.

In 2009, he opened his first restaurant, The Lunch Box, an 18-seat spot that was on Astoria Boulevard at Crescent Street just west of Chick-N-Soup; he still lives upstairs.

“Jason helped me out two to three times a week,” he says. “I quit Anheuser-Busch, but I still did real estate.” 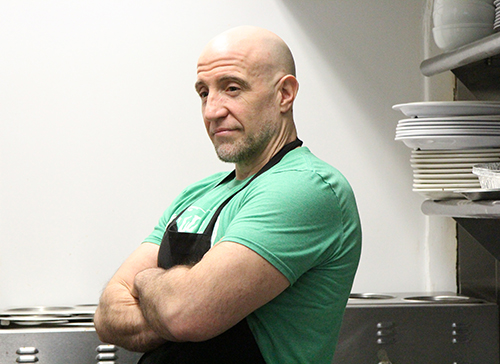 Lou’s family and friends and two chefs helped him get the restaurant up and cooking.

By the time he sold it, in 2012, he had lightened his workload considerably – his “easy schedule” consisted of DJing four nights a week and playing professional poker.

“I got pretty good at poker,” he says, “and I won a couple of big tournaments. I used my knowledge of psychology to win.”

He was pretty happy with his life and probably wouldn’t have opened Chick-N-Soup if the landlord of his apartment hadn’t bought the building at 30-12 Astoria Blvd. and persuaded him to do so. 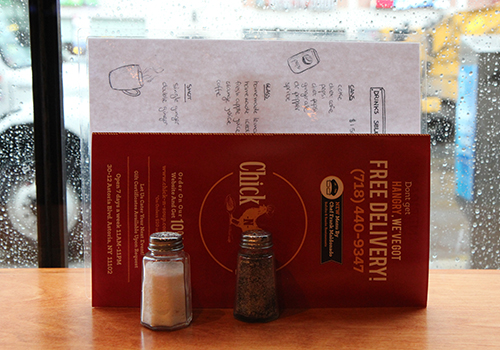 Lou and the friends and family he’s so lucky to have spent 18 months renovating the former funeral parlor.

Jason created the comfort-food recipes for Chick-N-Soup, which sells burgers, wings, mac and cheese, milkshakes, and of course, soups.

“I’ve tweaked them since, so now they’re mostly my recipes,” Lou says. 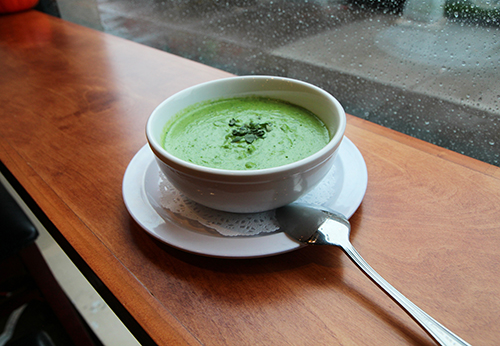 Lou says he’s thankful that he has the opportunity to own Chick-N-Soup, even though that means he’s on the premises from 8 a.m. until 10:30 p.m. every day.

“The time goes by quick,” he says, adding that he’s installed weights and a punching bag in the basement so he can keep in shape. “Besides, I like to stay busy.”

Lou says he owes his success not only to his friends and family but also to the best vendors, customers and employees on the planet. 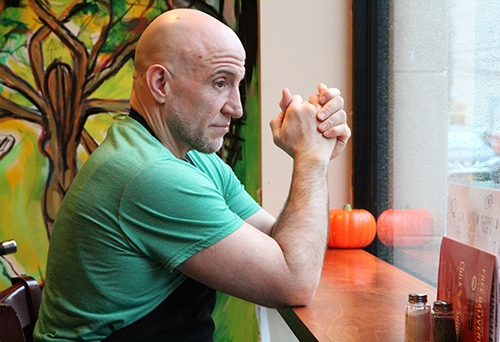 Saying thanks, all the time.

“I can’t thank everybody enough,” he says.

A cook just called in sick; this means Lou will have to fill in.

“I’ll be doing every order,” he says.

It will be a lot of extra work. He smiles because he is, indeed, a very lucky guy.

“I count my blessings,” he says.