Up against the snow-white fence, there’s a pile of Christmas trees, trussed up like Thanksgiving turkeys. 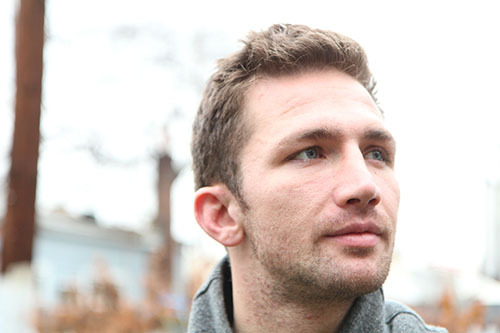 In the opposite corner of the mini-backyard, there’s a box full of table-top trees, their tender emerald needles reaching toward the holiday sky. 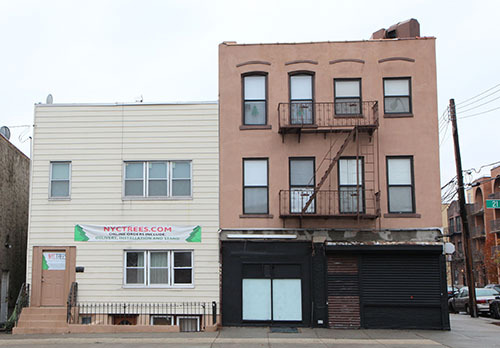 Photo by Nancy A. Ruhling
NYCtrees.com is based on 21st Street.

Standing in the center of this forest of Fraser firs is Harry DeLucia, iPhone glued to his ear.

It’s only the second week of December and already he’s coordinating 50 deliveries per day with what he hopes is holiday cheer.

The same thing happened last season, which is when he and his brother Louis, who lives in New Jersey, established NYCtrees.com, an online service that sells, delivers and sets up Christmas trees for $79 to $300. 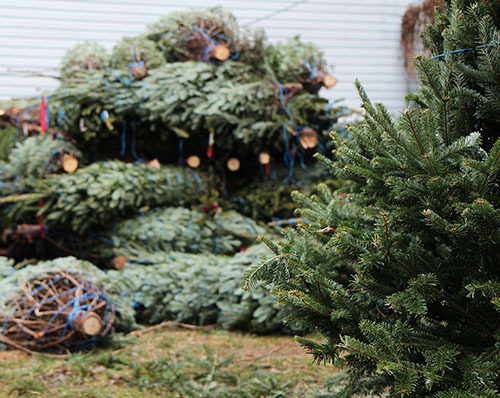 Photo by Nancy A. Ruhling
Trees waiting for new homes.

“All you have to do is sit on your couch and click,” Harry says, adding that the company also has five traditional stands, including one outside Mount Sinai Hospital Queens at 30th Avenue and 27th Street. “We do everything else, even sweep up the needles before we leave your house.”

NYCtrees.com, which is run out of the brothers’ boyhood home, was an outgrowth of a series of farm stands they established in Manhattan and Queens in the last couple of years. 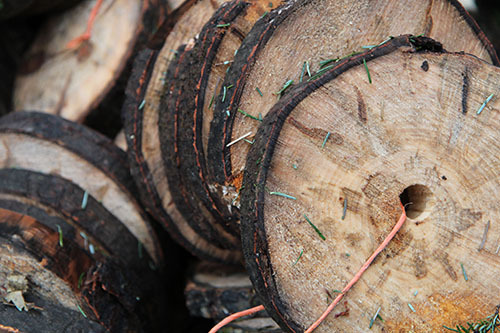 “The Christmas trees that are sold on the street come from North Carolina and Canada,” Harry says. “They were cut down months ago and don’t last long. Ours are sourced from small New Jersey farms, and they are fresh.”

Although Harry was born in the house that houses the business, he didn’t spend much time in Astoria until after he graduated from college and became a teacher five years ago. 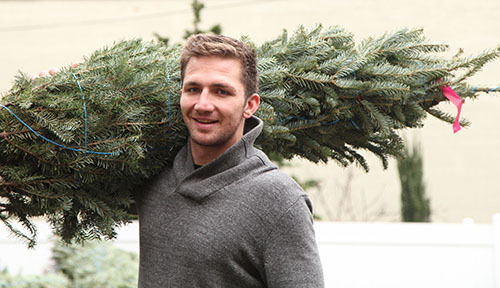 Photo by Nancy A. Ruhling
Harry does a lot of the heavy lifting.

His parents moved the family to Troy, New York, when he, the youngest of five children, was only 8 months old.

“They had been IV drug users, and they had HIV,” he says. “They knew they were ill; the move was an attempt to get their lives together.” 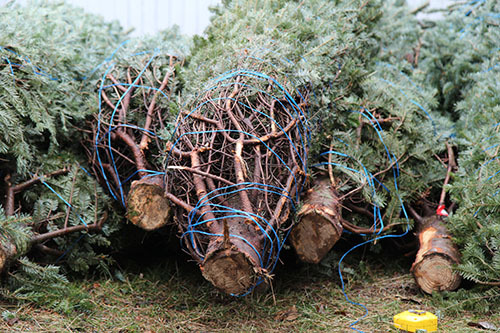 Photo by Nancy A. Ruhling
Harry’s backyard is a forest of Fraser firs.

Although his parents had stopped abusing drugs by the time Harry was born, financially, the family was in bad shape.

“We didn’t have enough money for food,” Harry says. “I remember them watering down the milk.” 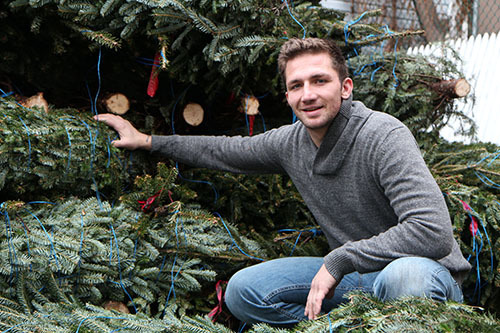 Photo by Nancy A. Ruhling
Harry gets the trees from small New Jersey farms.

There were, of course, good times, and it’s these Harry prefers to talk about, probably because his parents died, within three months of each other, when he was 9.

He remembers how kind his mother was, once stopping the car to pick up an elderly woman who was walking on a windy day. 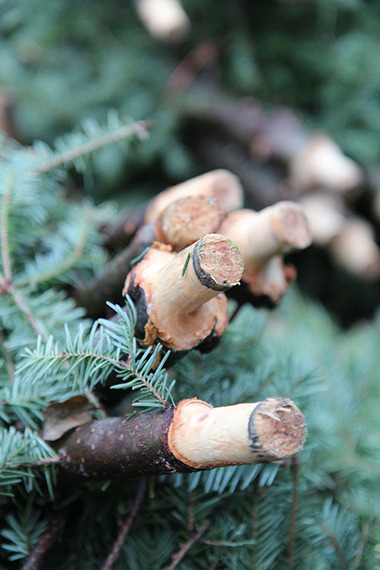 Photo by Nancy A. Ruhling
Trimmed, with care, for the stands.

Harry and Louis were taken in by a childless aunt and uncle who lived in Monroe Township, New Jersey. Another uncle owned a nearby farm, where the brothers worked the vegetable stand.

Harry got a little lost in his teenage years, and by his senior year in high school, he was living in his own apartment, delivering Chinese food and pizza to pay the rent.

He enrolled in community college, where he was getting As only in partying. 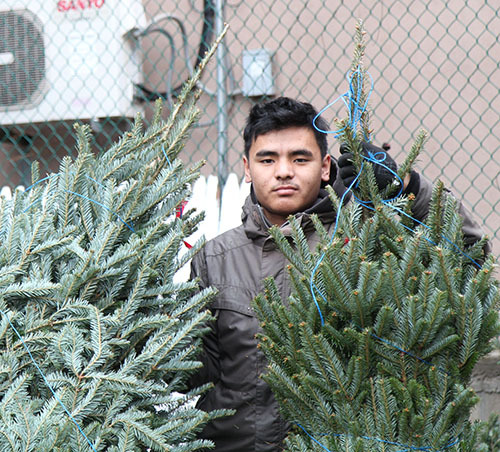 Photo by Nancy A. Ruhling
Tsering Sherpa, one of Harry’s holiday helpers.

He was about to drop out when he decided to use most of the $10,000 in life insurance money he inherited from his parents to take a trip around the world. 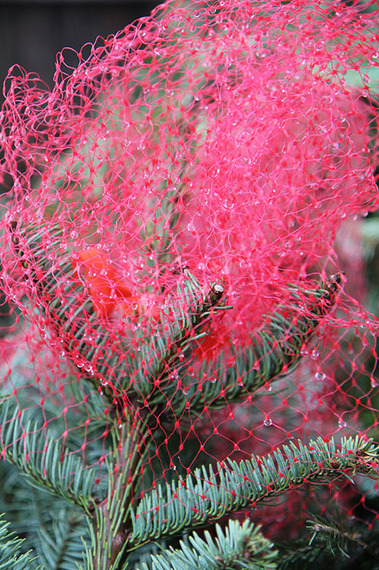 Photo by Nancy A. Ruhling
A tree trussed up like a turkey.

He worked his way through Sage College of Albany by taking a job as a live-in caretaker for five mentally challenged adults.

“They were like my family,” he says. “It is because of them that I learned to cook. I had to prepare their meals, and every night we ate dinner together.” 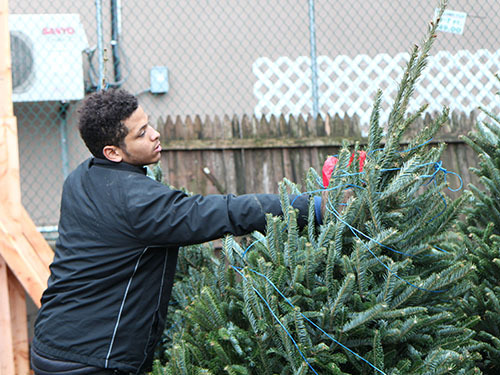 Photo by Nancy A. Ruhling
Japhet Guzman-Deleon checks out some trees.

He also spent a couple of months in South Africa teaching HIV education before landing a job with New York City public schools.

“Louis set up the first farm stand, outside our Astoria house, the year after I graduated,” he says. “He wanted to earn some extra money; I thought he was crazy.” 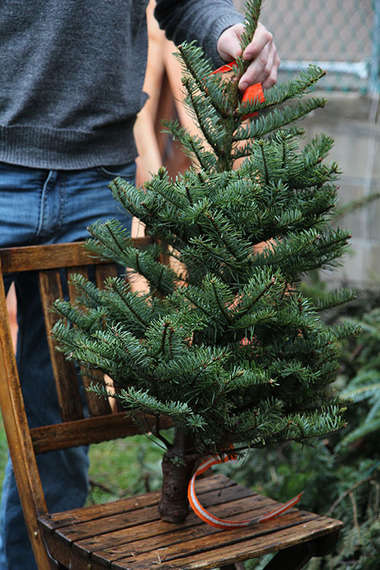 Photo by Nancy A. Ruhling
Showing a tiny tree.

Harry finds the venture to be so much fun that he doesn’t mind doing the extra hours on top of his full-time job at Columbia Secondary School, where he is a phys ed and health teacher and rugby coach.

“Many times after school I jump on the train and help Louis load boxcars and harvest crops,” he says. 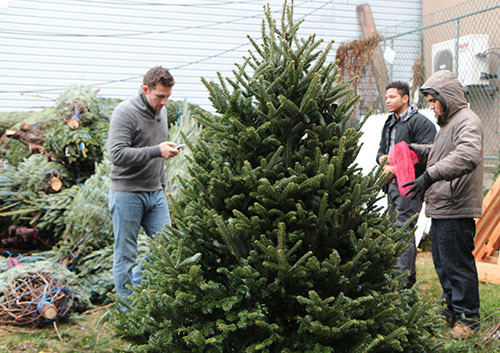 Someday soon, Harry, who is 29, and Louis, who is 32, are going to open two farm-to-table stores — one in Astoria and one on the Upper East Side.

“This doesn’t mean that I will give up teaching,” Harry says, adding that he’s working on a master’s degree at Lehman College. “I love the kids — they always are so happy to see me that they high-five me. I love the challenge of getting them to exercise without their realizing they are exercising.” 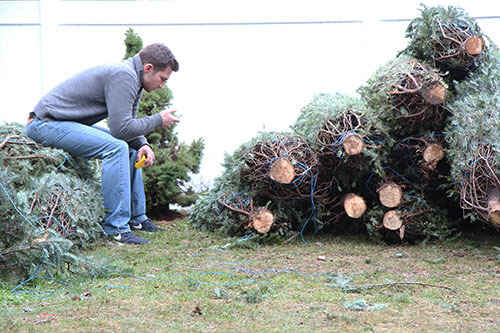 Photo by Nancy A. Ruhling
For Harry, a no-sleep season.

The one and only thing Harry wants for Christmas is sleep. This month, he doesn’t get to close his big, grey-blue eyes more than three or four hours a night.

As for the holiday, well, he doesn’t have any plans. Last year, he was so busy that he didn’t even put up a Christmas tree. This year, his girlfriend got him one. It’s 3 feet tall.