When the Battle of the Bulge bomb went off, Herb Greenberg flew up in the air. He landed on his back. 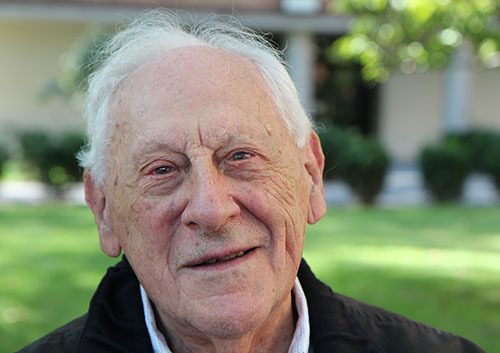 Photo by Nancy A. Ruhling
Herb’s a WWII veteran.

Separated from this event by the passage of seven decades, Herb, sitting in his big easy chair, inserts a metal leg brace into his left shoe and deftly ties the thin black laces.

He’s itching to take his walker out so he can sit on the park bench. From there, he can watch the children play and the flag on the pole wave in the wind.

The bomb that re-wrote Herb’s future was part of a mammoth sneak attack, a last and futile attempt by Hitler’s Nazis to change the outcome of World War II. 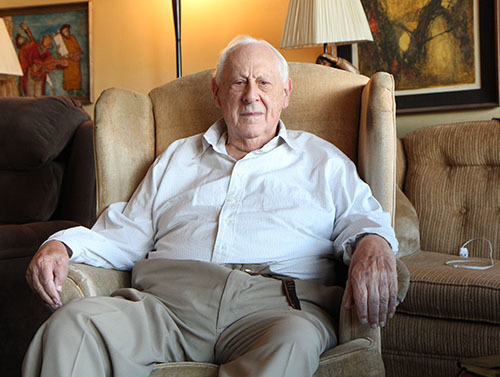 Photo by Nancy A. Ruhling
Herb was drafted when he was in college.

Herb, Technician Grade Five, Company B, 13th Infantry, 8th Division, was one of 600,000 GIs who beat them back and was one of an estimated 40,000 who were wounded in the 40-day European Theatre battle that commenced on Dec. 16, 1944 and carried its crimson tide into the new year.

“My job was to look for bombs,” he says, unfolding a map and tracing his journey across the Atlantic Ocean with his finger. “I got hit in France. I saw a lot of my buddies die. Did I think I was going to die? Everybody thinks they’re going to die, and as long as you don’t, you’re happy.”

Herb — 5-foot-71/2, brown hair, hazel eyes, 184 pounds — emerged from the war in August 1945 with two Bronze Stars, a Good Conduct Medal, a Purple Heart and arm, leg and back injuries that he has never let deter him.

He was a 21-year-old college student when Uncle Sam interrupted his studies at Long Island University and sent him into the U.S. Army for what turned out to be a three-year hitch. 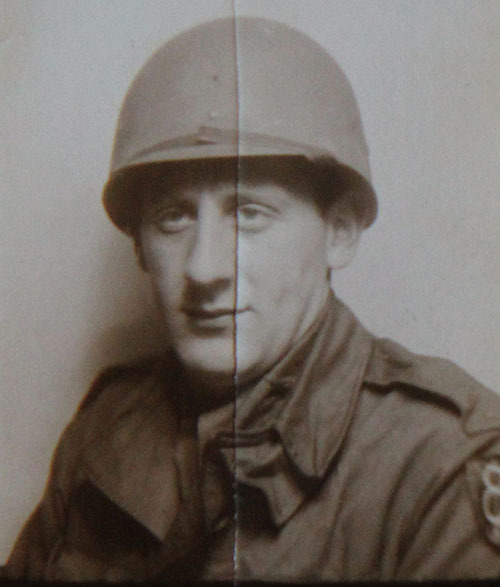 Photo by Nancy A. Ruhling
Herb’s job was to search for bombs.

He had planned to be a medical doctor.

“When I came back from the war, I was really far behind and older than everyone else in class,” he says. “It would have taken me too long to go to medical school.”

Instead, he got a degree in accounting, an action that altered his fate.

It was while he was crunching numbers for the International Ladies’ Garment Workers Union that he met Pearl, the pretty girl who would become his beloved wife and mother to his two daughters.

“We used to pass each other in the office every day,” he says. “I would smile at her, and she would smile back. On our first date, I wined her and dined her and took her to an opera.” 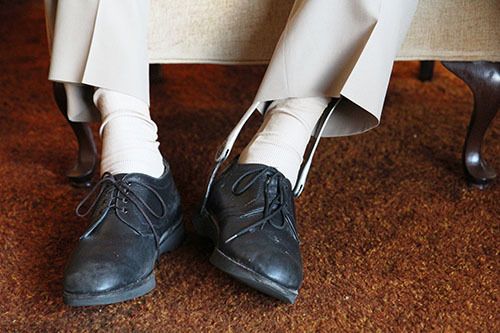 Photo by Nancy A. Ruhling
The leg brace is a result of his war injuries.

Herb and Pearl (he always called her Pearlie May) settled in Brooklyn with their widowed mothers. In 1958, they moved to the newly opened Queensview North co-ops and never left.

Herb took an interest in the co-op board, serving as president in its early years and setting its course.

After several decades, he changed careers, becoming a special-education teacher at a time when this was a new field. He chose to work in New York City’s most impoverished neighborhoods. 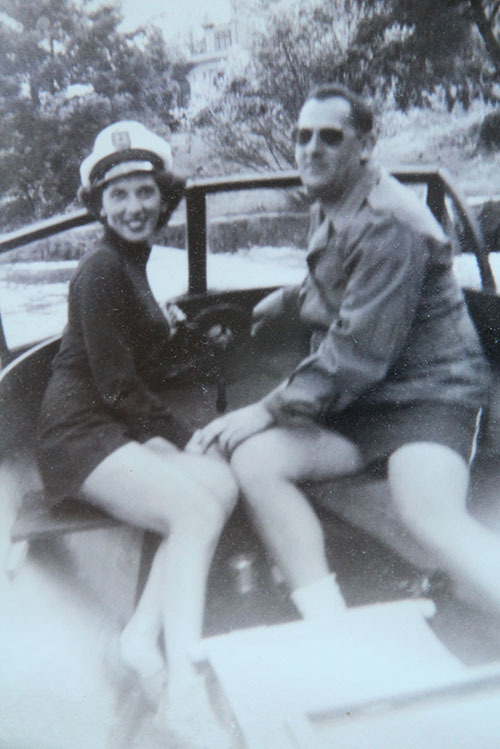 Photo by Nancy A. Ruhling
Herb and Pearl were married 62 years.

“The kids were not paying attention in class,” he says. “And I realized that it was because they were hungry, so I used to bring them ham and cheese sandwiches and taught while they ate. There was no money allocated for this, so I paid for it myself.”

Later, he did administrative work for the Department of Education, retiring at 70.

He and Pearl immersed themselves in the social activities of Queensview North and devoted themselves to their four grandchildren.

For a nonagenarian who survived one of World War II’s more catastrophic battles, Herb has relatively few health issues. 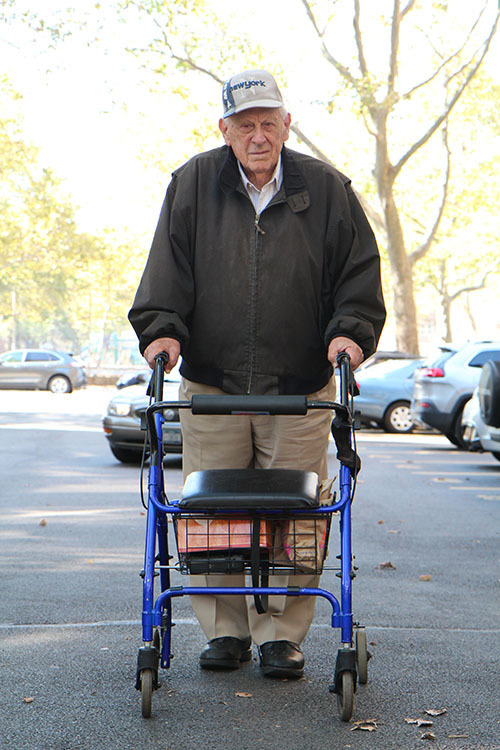 Photo by Nancy A. Ruhling
Herb speeds in his walker.

He didn’t start wearing the leg brace until he had back surgery 1977. The doctor also prescribed a cane, but Herb threw it away.

In 2000, after he suffered a stroke, he had to learn to walk again and give up driving. He wears a pair of hearing aids.

“My right one needs to be repaired,” he says. “So I’m having a little trouble now.”

The walker’s new, and Herb likes it because he can travel faster. 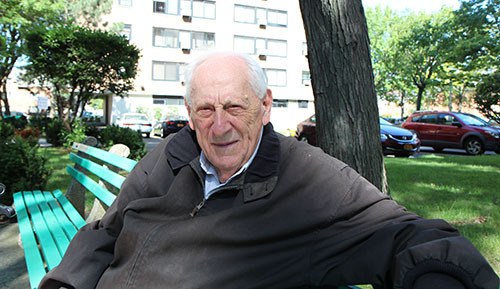 Photo by Nancy A. Ruhling
Herb is one of the original residents of Queensview North.

When Pearl died in 2012, Herb set out to reinvent and reinvigorate himself.

He inherited her caregiver. Millie Robinson stays with him 24/7 four days a week. Another woman fills in for her the other three days. 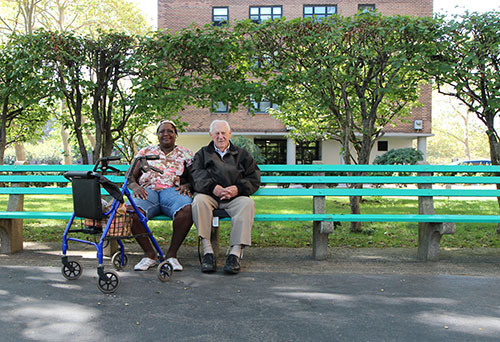 Photo by Nancy A. Ruhling
Herb and Millie in their favorite spot.

Last year, Herb took up bridge and plays with a group of Queensview North old-timers every Friday afternoon.

“The game is amazing,” he says. “The rule book is about three inches thick.”

He claims he’s not a very good player. 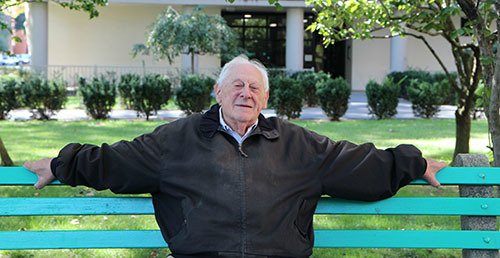 Photo by Nancy A. Ruhling
Herb’s counting to 100.

Herb has no intention of leaving this planet any time soon, but just in case, he likes to keep busy, going to bed at 2 or even 3 a.m.

“Life is very simple for me now,” he says. “My life is in its last stages. I’ve really lived a full life, but I expect to live some more. I’m planning on making it to 100 or more.”

He pushes his walker out the front door. He’s going to sit on the park bench.

Nancy A. Ruhling may be reached at Nruhling@gmail.com;