“I’m standing in the center field.” 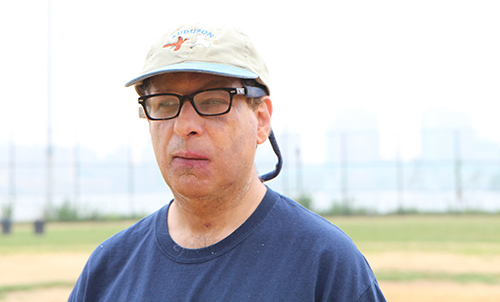 Photo by Nancy A. Ruhling
Neil is the co-chair of the Friends of Whitey Ford Field.

Neil Herdan wants to make sure I can identify him when I arrive at Whitey Ford Field, so that’s the message he texts.

The Grape Dutches, a team in the Astoria Social Softball League, is supposed to have a playoff game, but it’s so early that the players haven’t arrived yet. 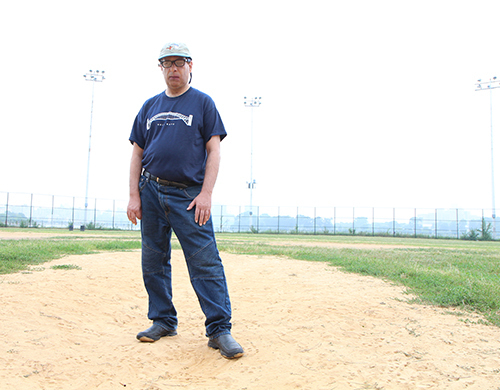 Photo by Nancy A. Ruhling
It’s the history, not the sport, that attracted Neil.

Neil is the only guy on the field.

And it’s a good thing because he’s not in center field. He’s smack in the middle of the pitcher’s mound. He apparently has no idea that there’s a difference. 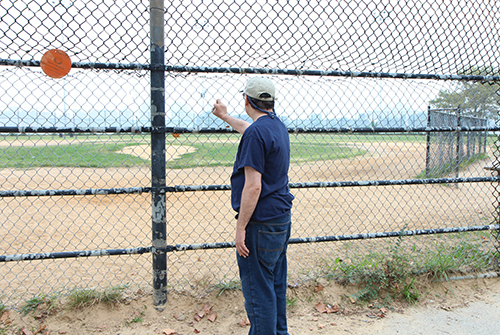 Photo by Nancy A. Ruhling
Neil grew up in a London suburb.

At any rate, his mapping mistake would not have mattered much because even amid a sea of sports uniforms, he’s a standout on the diamond.

He’s the guy wearing the jeans and the Audubon baseball cap. 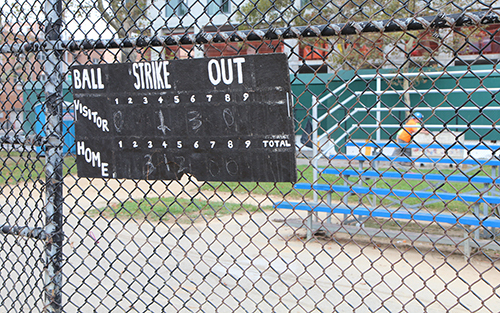 When it comes to those sports, Neil, a self-described “smallish” guy with spectacles, is the first to admit that he’s the odd man out, whether he’s in center field or on the pitcher’s mound. 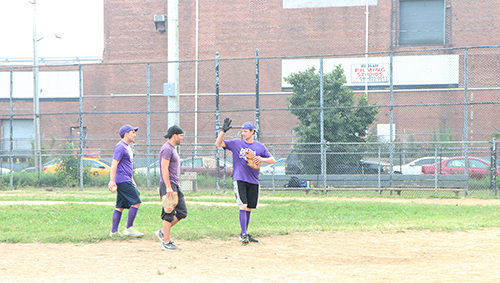 Photo by Nancy A. Ruhling
The Grape Dutches take the field.

Neil, the co-chairman of the volunteer advocacy group Friends of Whitey Ford Field, makes no apologies for this.

He’s British, so he never played the American-as-apple-pie ball game when he was a boy. 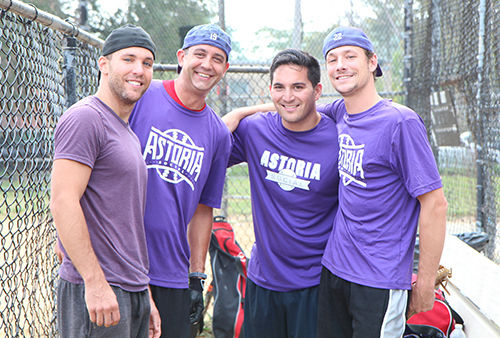 “I’m embarrassed to admit that I had no idea who Whitey Ford was,” he says. “Or that he was an Astoria native, a Baseball Hall of Famer and the greatest pitcher the Yankees ever had.”

Besides which, when Neil was growing up in the London suburb of Willesden Green, the home of prize-winning novelist Zadie Smith, he really was more interested in books than balls. 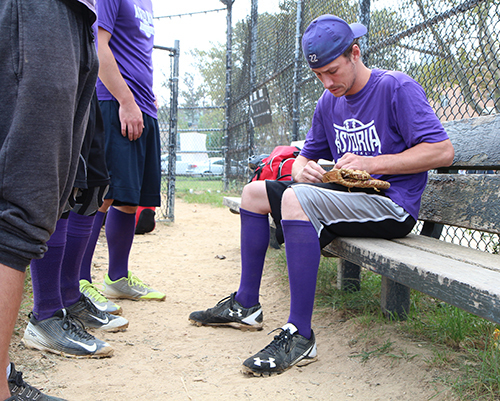 Photo by Nancy A. Ruhling
Making the glove fit.

“When I was a kid, I did play rounders, which is a bat-and-ball game somewhat like softball, and I’ve always been a fan of football, which is what Americans call soccer,” he says. “And I’m still an avid supporter of London’s Chelsea Football Club.”

Neil, a former corporate librarian who is the founder of the prospect development consulting firm 31St Avenue Project, didn’t even know that Whitey Ford Field existed until he took a tour of it with the Greater Astoria Historical Society a couple of years ago. 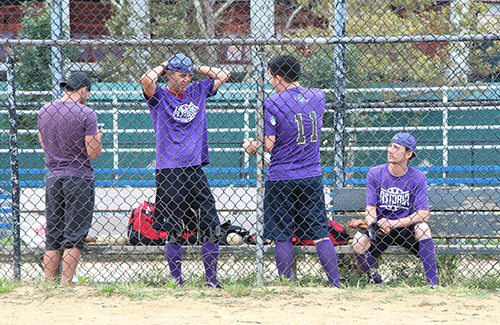 Photo by Nancy A. Ruhling
Strategizing.

Although Neil has lived in Astoria since 1988 – he came to New York City in 1985 to work on a master’s degree in librarianship at Columbia University – he had never before become involved in a high-profile community project.

“I never expected to be doing this,” he says. “It fell into my lap.” 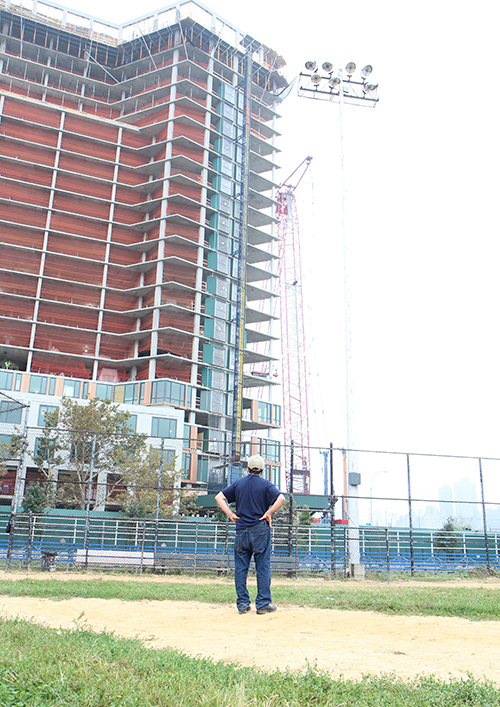 Photo by Nancy A. Ruhling
The Durst building under construction.

After attending some city council proprietary budget assembly meetings, Neil signed up for the parks and transportation committees.

When it came time to pick projects to fund, Whitey Ford Field popped into his mind. 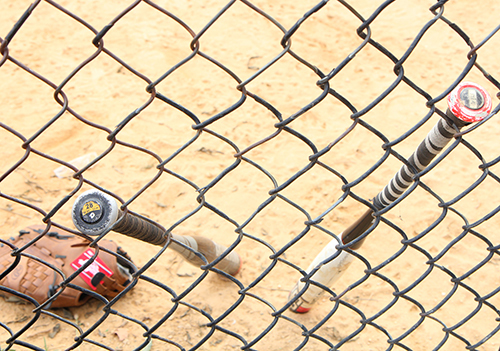 Photo by Nancy A. Ruhling
The bats stand ready.

“It was the history of the spot – the first settlers in Astoria made their homes between 26th and 27th avenues – not the sports aspect that attracted me,” he says.

Others had tried to get funding for the field, but nothing ever came of the proposals. Indeed, Neil’s first two attempts, for $300,000 for fitness equipment, met similar fates.

So he was quite surprised this year when Councilman Costa Constantinides and Queens Borough President Melinda Katz announced they were designating $2 million for an upgrade of the field, which is next to The Durst Organization’s Hallets Point Astoria Cove mixed-use project.

Photo by Nancy A. Ruhling
Come on, send that ball my way.

Faster than you can say, “three strikes, you’re out,” Neil was in.

He was named a member of the newly formed Friends of Whitey Ford Field, which he and Blair Clancy, Ford’s granddaughter, co-chair. 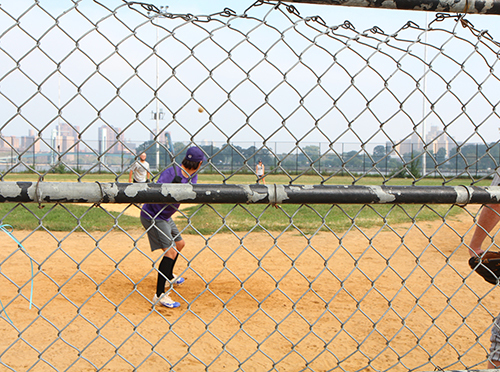 Photo by Nancy A. Ruhling
Batter up!

He’s thrilled to be on the winning team.

“Where I grew up was very much like Astoria,” he says. “It was very diverse – more than 100 languages were spoken there. I’ve been devoted to Astoria ever since I moved here, and I want to improve people’s lives.” 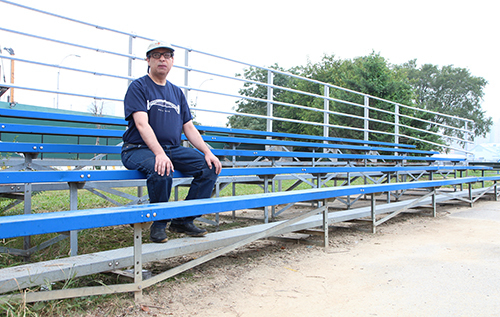 Photo by Nancy A. Ruhling
Neil in his favorite spot.

The upgrade of the field could take a couple of years, more than enough time for Neil to learn to play ball.

“I’m 55 — too old to play, and I have a bum leg,” he says, carefully climbing off the bleachers, where he retreated as soon as the Grape Dutches fielded the first pitch.