Sylvia-Anais Mouzourou brings out a box of dates and places them on her office desk. 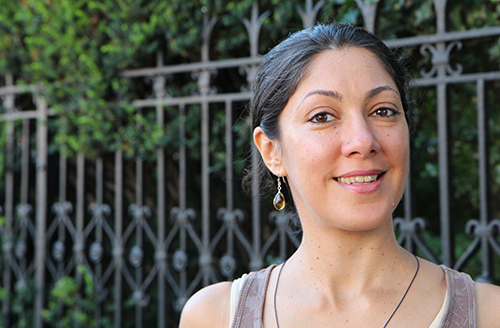 Photo by Nancy A. Ruhling
Sylvia is from Cyprus.

Would you like a cup of iced coffee? Or how about a glass of water?

Feeding visitors, she says, is a Greek thing.

Sylvia is, among other things, a Moon Priestess, and, the food aside, she tends to focus more on the spiritual than the physical side of life.

She is from Limassol, Cyprus’ City of the Sun, which is where her training as a healer and psychoanalyst began and where most of the rest of her family remains. 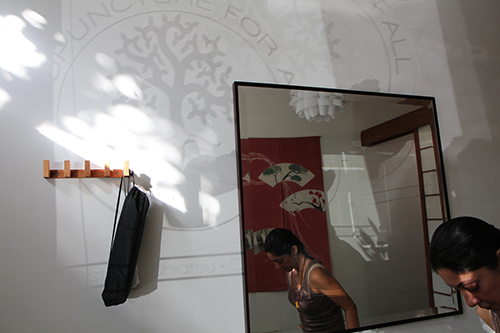 Photo by Nancy A. Ruhling
Sylvia is a holistic spiritual healer.

Sylvia, who has a dainty diamond stud in her nose and a thick black braid down her back, grew up loving dancing, painting, poetry and visiting museums. She always figured she would make her career in the arts.

Her grandfather was an engineer for the U.S. Embassy in Cyprus, so she attended Limassol’s American schools, where she learned English early on.

As a student at Intercollege, she started out studying art history. 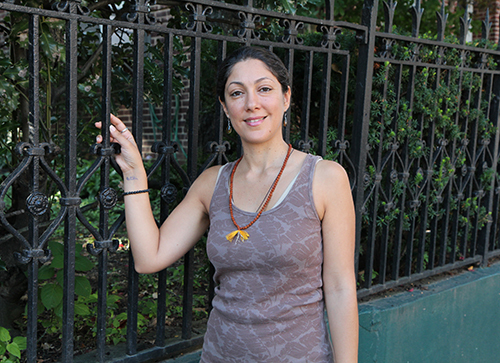 Photo by Nancy A. Ruhling
She has a bachelor’s degree from Queens College and a master’s from Brooklyn College.

When she was offered the chance to study in Athens or Indianapolis for a semester, she didn’t hesitate to head to Indiana.

“I felt Cyprus was too small,” she says. “I wanted to expand and get to know the world.”

Although she’s always been interested in spirituality, her path to the healing profession began via a conventional route. 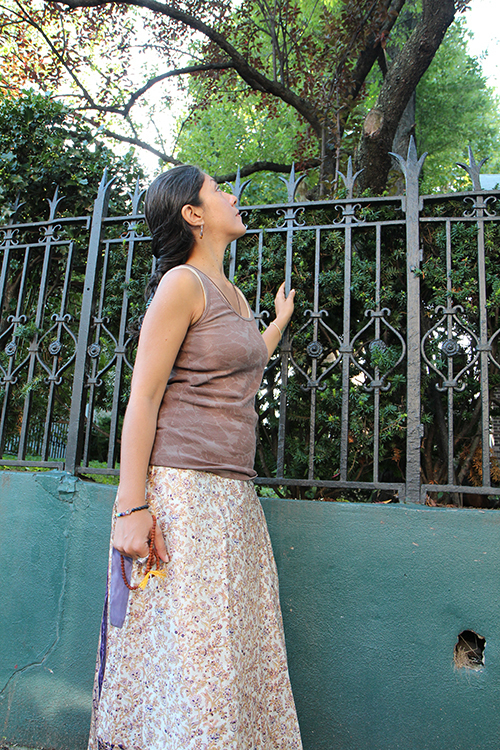 Photo by Nancy A. Ruhling
Sylvia communes with nature.

After her semester in Indiana ended, she moved to Astoria to continue her studies at Queens College, where she earned a bachelor’s degree in psychology and sociology. She also started studying chakra energy healing.

She got a job as an intake coordinator at Goodwill Industries in Astoria and eventually earned a master’s in counseling psychology from Brooklyn College. For a while, she worked as a clinical psychotherapist, seeing children as well as adults.

“I took a year off to study yoga and meditation, which I had started when I was 17, which was a year before I came to America,” she says. “Then I went to an energy healing school. It was a big turn in my life.” 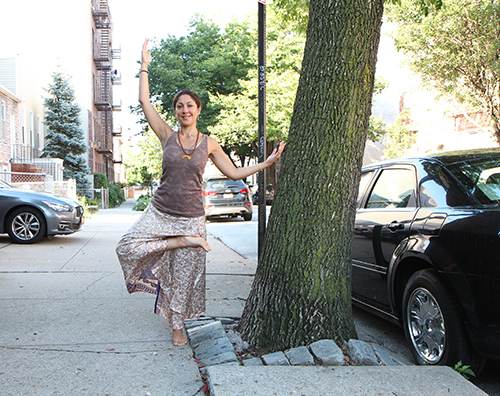 Photo by Nancy A. Ruhling
Sylvia doing a tree pose at a tree.

It was around that time that she became a Moon Priestess.

“I’m a medium between the sacred and the profane,” she says. “I mediate between the physical temple and the spiritual temple.”

As a priestess, she communes with the Earth, rooting herself with Mother Nature.

“As part of that process, I dedicate time every day to meditation,” she says. “I call myself back from the energy of people and demands of the city. I ask myself how I feel and what I need.” 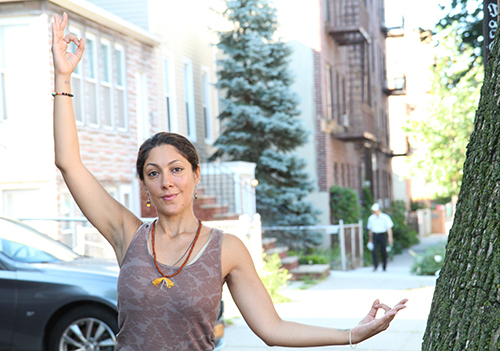 Photo by Nancy A. Ruhling
Yoga is one of her many skills.

Despite all her training, she wasn’t sure what she was going to do with her life. She needn’t have worried.

“During one of my meditations, I got the idea to open a yoga studio,” she says. “I wanted to create a space where my talents could come out.” 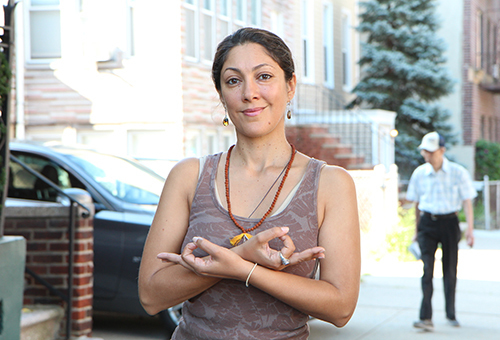 Photo by Nancy A. Ruhling
In 2009, she became a Moon Priestess.

After it closed, early this year, Sylvia “felt like a mother losing her baby.”

Since then, she has opened her own private practice, The Guided Healing, where she uses her skills – hands-on healing, sound healing, intuitive teaching, Tarot and Rune card readings, yoga therapy, meditation, family constellations, aromatherapy and a variety of workshops – to restore balance to people’s lives.

“I hear the story of each person, and I treat them with whatever tools will open them up,” she says. 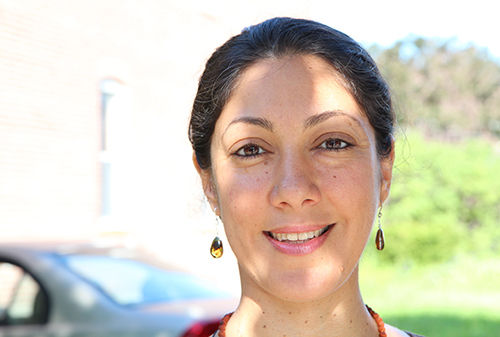 Photo by Nancy A. Ruhling
She was the co-creator of the Athena Yoga & Healing Arts Center.

When she’s not meditating or healing people, Sylvia likes to cook (she’s a vegan), dance, travel, take photos and write.

“I’m working on a book describing the magical experiences in healing that I have had,” she says.

She’s also getting ready to open a retreat upstate. 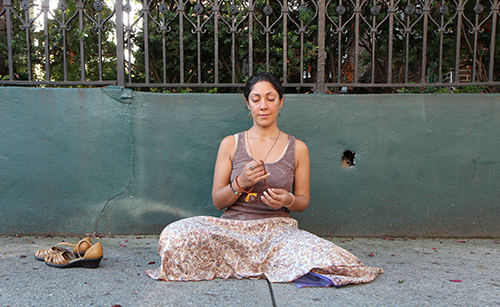 Photo by Nancy A. Ruhling
A sidewalk meditation.

“It will be a temple where people come to heal,” she says. “It will be like a country home where you can pitch a tent in the yard or rent a room.”

She doesn’t know when or how this will happen. 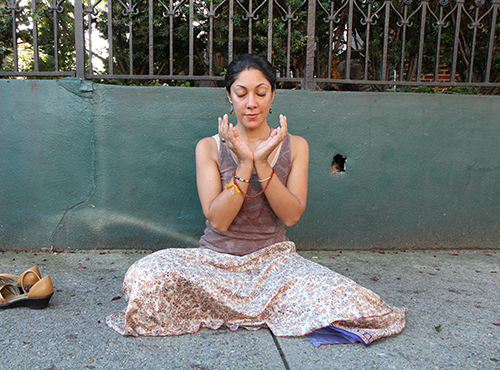 Photo by Nancy A. Ruhling
She’s manifesting a healing retreat she wants to open upstate.

But she’s sure it will come.

She will meditate and manifest it.