Gladys Gray is thumbing through an album of old photos, and when she sees the black-and-white studio shot of the wedding, she stops. 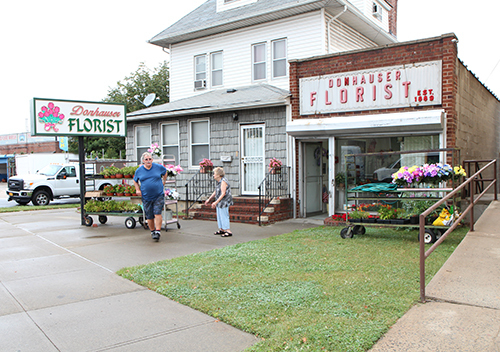 Photo by Nancy A. Ruhling
Donhauser Florist is at 71-01 Astoria Blvd.

She points out the smiling flower girl with the chubby cheeks and bobbed hair.

“That’s me,” she says. “This was taken 85 years ago when my cousin got married. I remember the exact year because I was 4.” 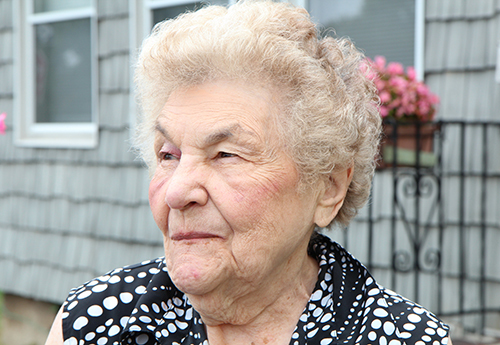 Photo by Nancy A. Ruhling
Gladys’ grandfather founded the florist in 1889.

There’s something else about that photo that Gladys will never forget: the bouquets.

Bold, bountiful and almost too big to hold, they were made by Donhauser Florist, which has been in Gladys’ family since its establishment in 1889. 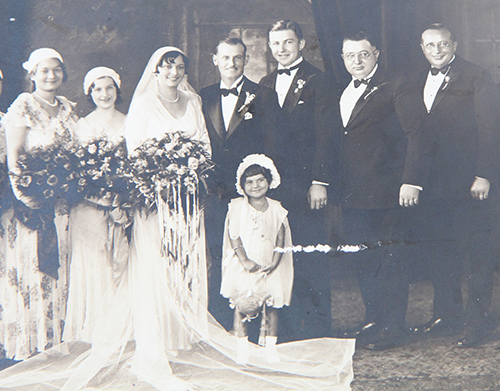 Photo by Nancy A. Ruhling
The flower girl and the bouquets are by Donhauser.

It was started by Hans Donhauser, her grandfather, who came to America from Hamburg, Germany.

There’s a framed portrait of him hanging in the shop. It’s surrounded by a bouquet of photos of Gladys’ children, grandchildren and great-grandchildren.

She tells the stories of the significant events of their lives and the Donhauser arrangements that celebrated them. 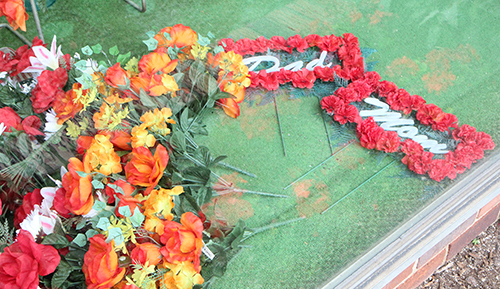 Photo by Nancy A. Ruhling
Faux flowers for cemeteries.

Originally, Hans set up shop in Brooklyn 128 years ago. Shortly thereafter, he moved to Astoria when he found out that St. Michael’s Cemetery was searching for a florist.

At first he rented a store on Astoria Boulevard at 49th Street. At some point, he set down roots at 71-01 Astoria Blvd.

Gladys doesn’t remember exactly when this occurred or whether it was Hans who built the house that still houses the shop. 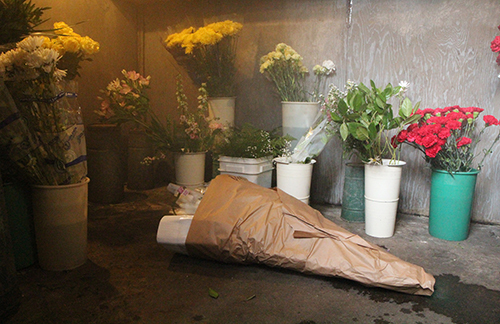 Photo by Nancy A. Ruhling
Flowers chill in the basement refrigerator.

What she does know is that he planted 14 greenhouses next door, where the Westway Motor Inn now stands.

“When the Grand Central Parkway was built in the mid-1930s, the entire house had to be moved back to make room for it,” Gladys says. “It was amazing. They moved everything. Not a single thing was broken.”

Gladys’ parents kept their own greenhouses on 49th Street, and she started helping out there when she was 12. 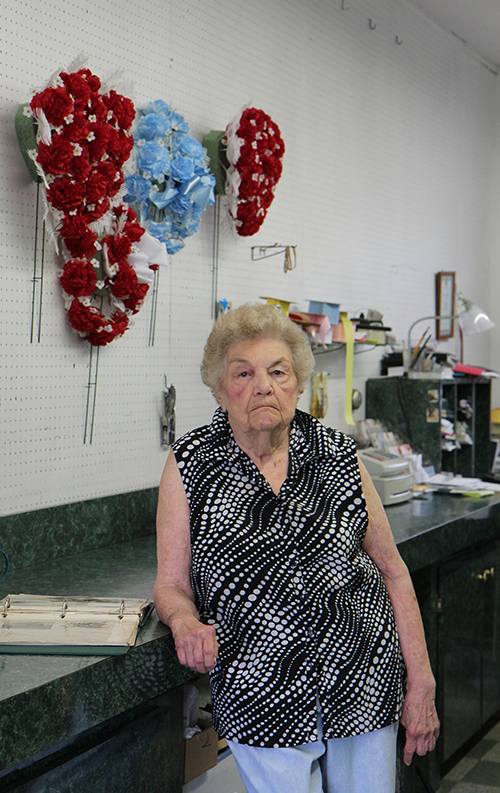 Photo by Nancy A. Ruhling
Gladys stations herself at the front counter.

“I’m an only child,” she says. “I couldn’t say no when my father asked me to be his assistant.”

Gladys took to the job like a hydrangea bush in soaked soil.

“I loved it so much that I stopped going to college so I could work there all the time,” she says. 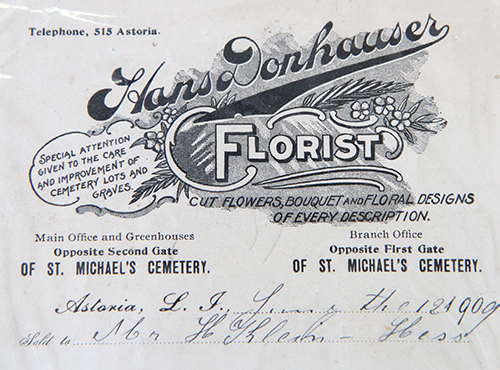 Photo by Nancy A. Ruhling
A receipt dated 1909.

It also helped that William Gray was working there.

“I was in high school when I met him,” she says. “I fell in love with him because when he filled out – he used to be skinny — he was very good looking.”

At their wedding, in January 1954, Gladys carried a Donhauser bouquet of white orchids and lilies of the valley. Her bridesmaids held arrangements of pink camellias. 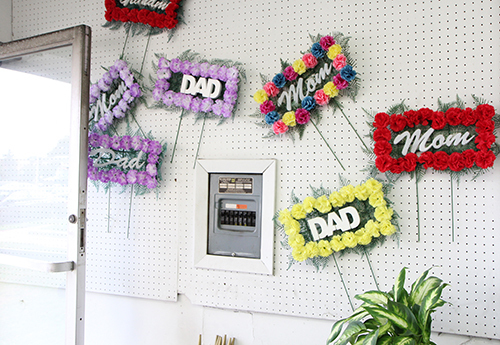 Photo by Nancy A. Ruhling
The shop’s pegboard walls are art-gallery white.

While she stayed home to take care of their three children, William created floral displays for the Statler Hotel in Manhattan before joining Donhauser Florist.

When Hans died, Gladys’ aunt and uncle took over the shop. They, in turn, turned it over to Gladys and William in 1977. 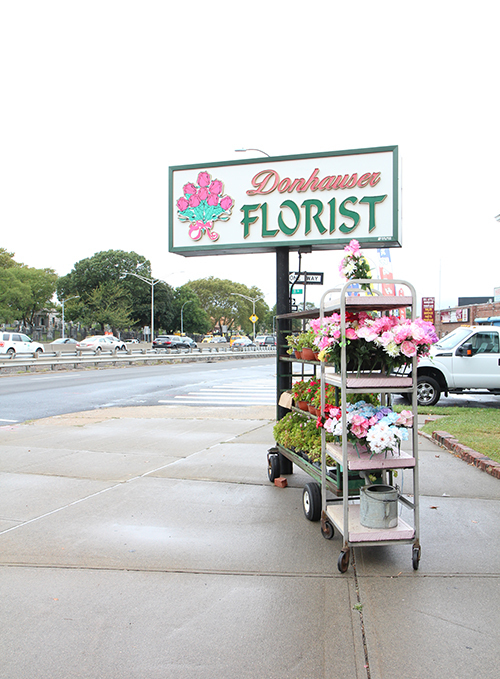 Photo by Nancy A. Ruhling
Donhauser attracts a lot of drive-by traffic.

With its art-gallery-white pegboard walls, Donhauser is a blank backdrop for a rainbow of blooms and bouquets.

There’s a small glass-door refrigerator by the entrance. Banks of display shelves are covered in shiny green paper that evokes spring grass.

There’s no foot traffic because Donhauser, which looks out at St. Michael’s Cemetery, is in an out-of-the-way spot, but the drivers of the cars flying along Astoria Boulevard frequently brake for bouquets. 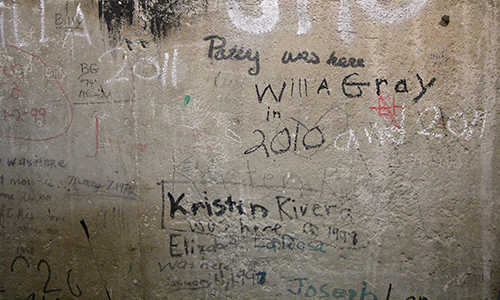 Photo by Nancy A. Ruhling
The family tree is recorded on the basement wall.

“It’s mostly men,” Gladys says. “They see us from the road and come in to buy a dozen roses.”

William and Gladys man the counter, with seasonal help from part-timers. 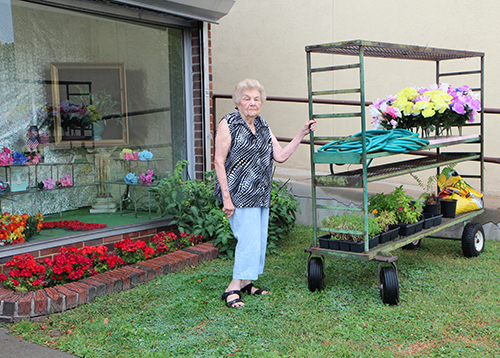 Photo by Nancy A. Ruhling
Gladys started working in her parents’ greenhouses when she was 12.

Their son, Billy, runs Donhauser Land Services out of the basement, where the Grays make the bouquets on ancient wooden counters. When things get hectic, he pitches in.

Gladys, a tiny woman whose hair retains hints of strawberry-blond tints, and William, who like Gladys is 89, have no plans to retire. 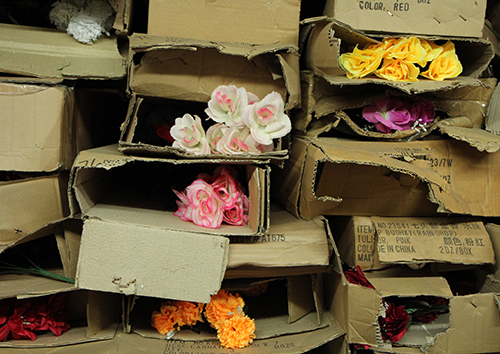 Nobody in the Donhauser family ever has, and they don’t want to break the tradition.

But they are at an age where it is getting harder and harder to put in so many hours. William, who has not been feeling well, recently started taking some time off. 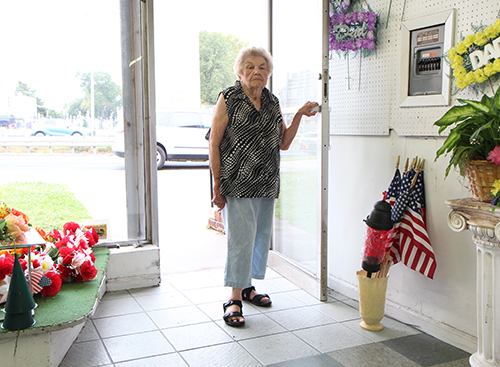 Photo by Nancy A. Ruhling
It’s a family tradition to not retire.

Gladys, who has a bad leg, finds it difficult to navigate the century-old worn, wooden steps that lead to the basement.

When asked about the pain, she keeps climbing and claims it doesn’t bother her. She will carry on regardless. 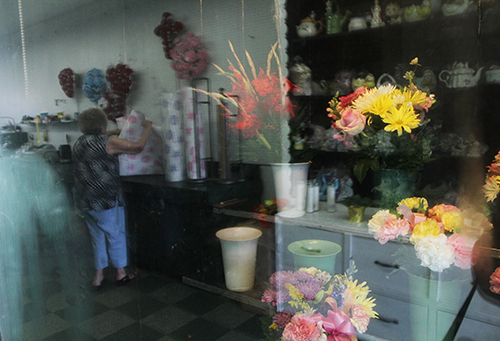 Photo by Nancy A. Ruhling
Gladys, who is 89, keeps going.

“I love coming in to the shop to meet the people,” she says. “And I like making people happy.”

Gladys takes a potted white begonia off the shelf and wraps it in pretty paper. 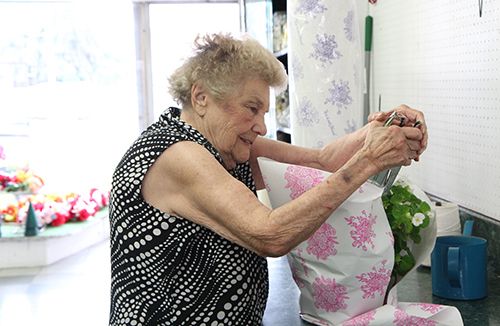 Photo by Nancy A. Ruhling
Gladys putting pretty paper on a white begonia.

“I want you to have it,” she says. “Plant it in your yard so you think of us every time you see it.”

Gladys will, of course, be heartbroken if Billy ever closes the florist shop.

But she takes comfort in the fact that his landscaping business will carry on the Donhauser family name.