Tomohiro Arakawa has his hands full. He’s juggling a bulky backpack and a spindly scooter as he orders his breakfast at Lot’s O Bagels on Broadway. 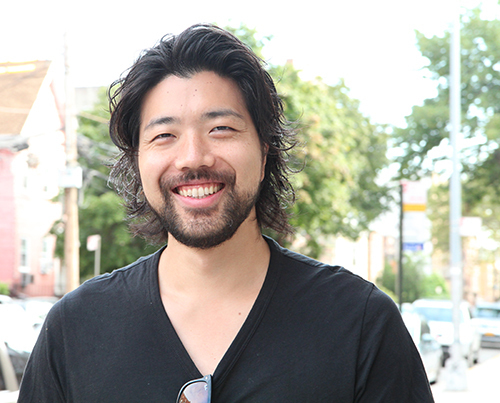 Photo by Nancy A. Ruhling
Tomohiro is a hair stylist at Frédéric Fekkai in Henri Bendel on Fifth Avenue.

The Saturday subways are screwed up. He’s on his way to work in Manhattan and doesn’t want to be late.

Scooter aside, Tomohiro stands out in a crowd. He’s tall – 6 foot, plus a couple more inches when he’s standing on the Swagtron – and trim, and he’s dressed in 50 shades of black, which add super-chicness to his stature.

Tomohiro is a stylist at Frédéric Fekkai, the celebrity salon in Henri Bendel on Fifth Avenue. 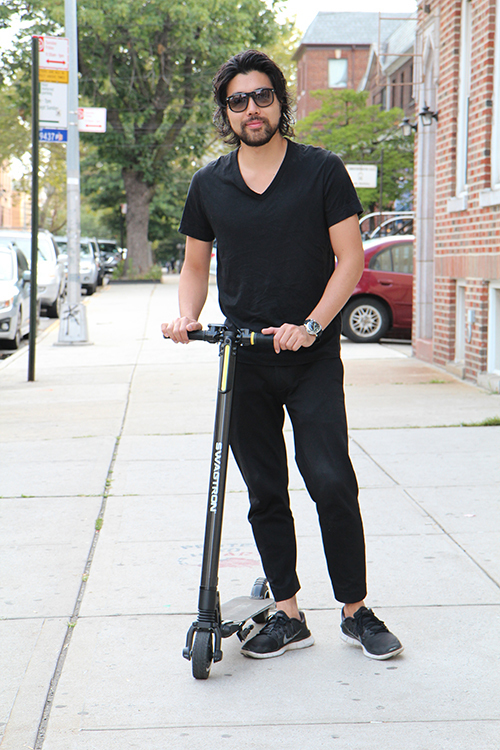 Photo by Nancy A. Ruhling
Tomohiro grew up in a temple in Akita, Japan.

His jet-black locks, whose curls carefully caress his collar, look wet and windswept.

A native of Akita, Japan, Tomohiro grew up in a Buddhist temple in the countryside.

It was, he says, an idyllic although unusual childhood. 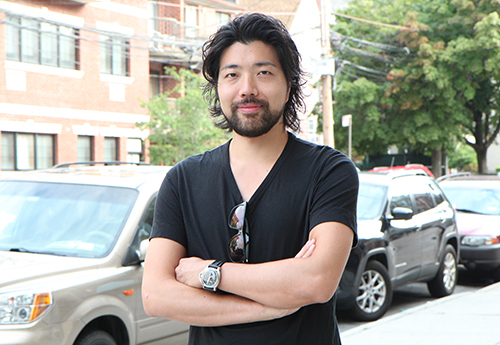 Photo by Nancy A. Ruhling
He started cutting his own hair when he was in high school.

“All my friends had parents who worked at companies,” he says. “My father was the temple master, so my parents were at home with my two older brothers and me all the time. I used to be jealous of the freedom my friends had. But by the time I was 15, I liked the fact that I was different.”

At Sennenji, the temple that was established 300 years ago, the family lived in a five-bedroom apartment. Tomohiro dutifully prayed two times a day – at 7 a.m. and 5 p.m. — until he started going to school.

“I stopped because the times didn’t match my schedule,” he says.

Early on, he took to art and briefly considered a career as a painter or sculptor. 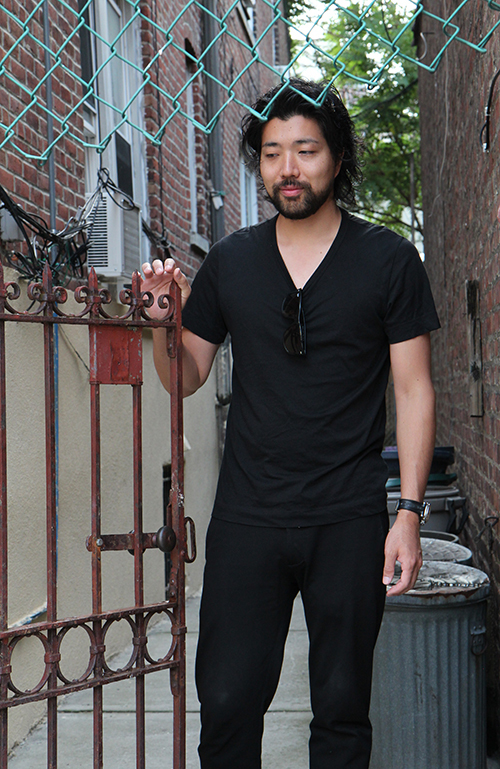 Photo by Nancy A. Ruhling
He came to New York City six years ago when he was 25.

“But I couldn’t imagine making enough money to feed my family as an artist,” he says.

It was a series of bad haircuts that changed his looks and his life.

“I started cutting my own hair because I didn’t like the haircuts I was getting,” he says. “My friends liked it, and I started cutting their hair in the classrooms after school for free. I was having fun doing it.”

It was a good fit for Tomohiro. 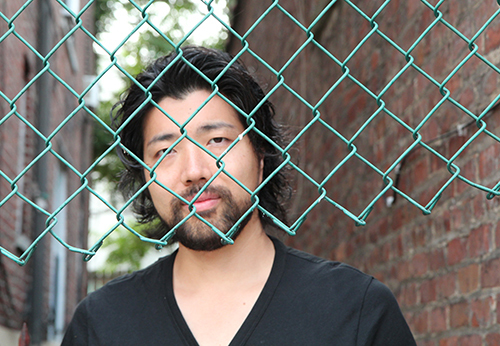 Photo by Nancy A. Ruhling
He has developed his own line of hair-care products.

“I like people and creating something for them,” he says. “I like getting a quick response about my work. If I were an artist, I might have to wait until after I died to get the same kind of recognition.”

After two years at Yamano Beauty College in Tokyo, Tomohiro got a job at Zacc, a top salon in the capital.

Five years later, at 25, he brought his scissors and signature style, along with a single suitcase, to New York City.

“It was scary because I didn’t know any English – I couldn’t even say hello,” he says, speaking fluently. “But it was exciting because I knew that even if I had to move back, I still would have learned something.” 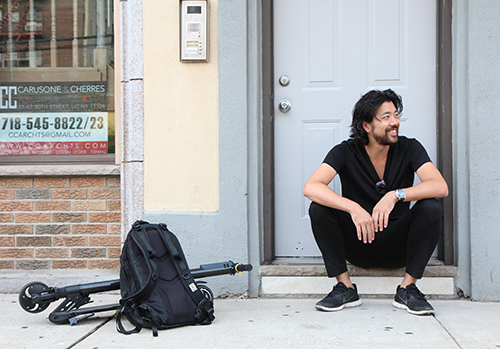 Photo by Nancy A. Ruhling
He married a high school friend; their second child is due in January.

While he was learning the language in ESL classes, he lived off his savings.

“I couldn’t work right away because I could not communicate with clients,” he says. “I had $20,000, but what with rent, classes, living expenses and visa fees, it was gone in six months.”

His first job, at a Japanese hair salon in the West Village, prepared him for Frédéric Fekkai, where he has been since 2014.

“I always wanted to work there,” he says. 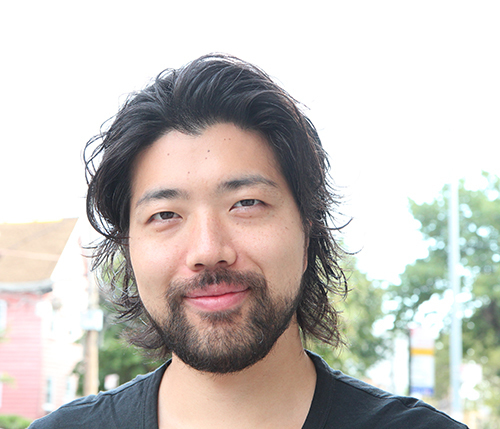 Photo by Nancy A. Ruhling
He wants to open his own salon and other related businesses.

During this time, Tomohiro’s life changed in other significant ways. He fell in love with Natsumi, a high school friend, who came to visit him in New York City.

Three years ago, they married. Their son, Yugo, is 18 months old, and they are expecting a second child in January.

Tomohiro hasn’t worked out every detail of his future, but he is considering many options.

“I’m happy to work at Frédéric Fekkai because I get to meet great clientele from all over the world,” he says. “At some point, when I am much older, I may want to open my own hair salon and perhaps build other businesses, like a nail salon, around it.” 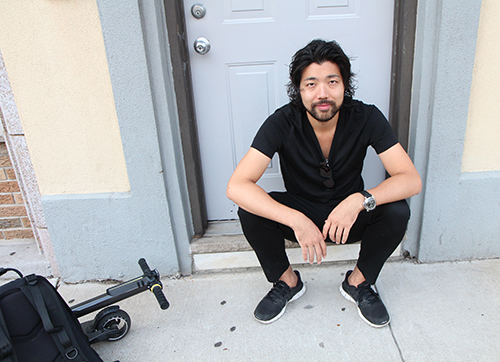 Photo by Nancy A. Ruhling
He’s excited about the future.

Meanwhile, he’s marketing his own line of hair-care products. Amimo, which is sold exclusively in one salon in Tokyo, will be on the U.S. market soon.

That, he hopes, will lead to bigger things.

Tomohiro grabs his bagged bagel, backpack and scooter and heads to the subway, which may or may not come on time.