“I call this my black limousine,” says Odette Lupis as she drives her Easy Wheels shopping cart onto the sidewalk.

She’s silver-haired and 77, and it’s burdensome and bulky. 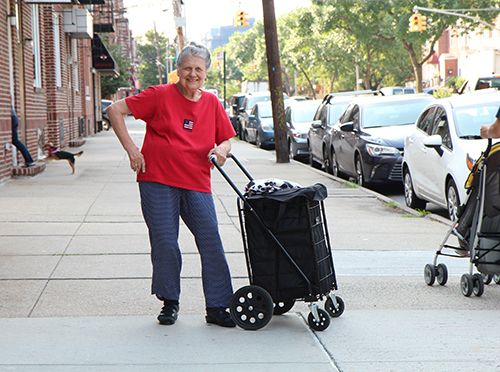 Photo by Nancy A. Ruhling
Odette with her black limousine.

In the bouncy, bumpy march down the narrow stairs from her third-floor walkup, it has the advantage.

Odette, a photojournalist who began shooting when the field didn’t welcome women, made a career of hauling equipment around.

Typically, she carried three heavy cameras with her on assignment. She wore two around her neck and mounted one on her side. She dressed in homemade vests and filled their pockets with lenses and flashes and whatever else she needed to get the job done.

She stood for hours waiting for the perfect shot. She trained her lens on the likes of Mario Cuomo, Mother Teresa, Liza Minnelli, Desmond Tutu, Mike Tyson and even a man named Trump.

Then, she rushed back to her darkroom to develop the film and make the prints to deliver to The New York Times, Time, Newsweek and just about every other publication you can think of. 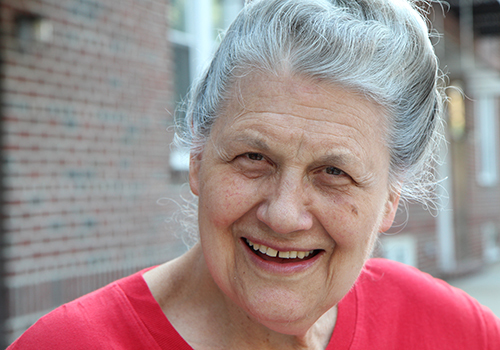 Photo by Nancy A. Ruhling
Odette’s photos have been in nearly every publication you can think of.

“Sometimes, I was up all night so I could make deadline,” she says. “I kept a cot in the darkroom. I devoted myself 300 percent to my career. When people ask me why I’ve always been single, I tell them I married Mr. Nikon.”

The gold wedding band she wears is the one her father gave to her mother in 1938.

But the black limousine has taken its toll: She got a hernia from carting it up and down the stairs the wrong way.

Odette, whose back is bowed and whose hair is piled on top of her head like a crown, hasn’t shot photos professionally since 2009.

That’s when her mother, Lea, had the stroke that left her in a wheelchair. The apartment they shared isn’t accessible, so Lea ended up in a nursing home. 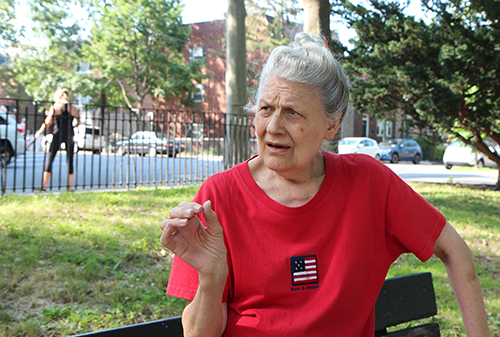 Photo by Nancy A. Ruhling
She’s interested in ‘anything human.’

Odette, an only child, took care of her full time until her death in 2013.

They had a close relationship that deepened when a brain tumor killed her father in 1968.

The family, who lived in Neresine on the Italian island of Lussinpiccolo, came as refugees to Queens after World War II. They stowed away on a produce boat that took them to Venice under the cover of darkness.

“Our island became part of Yugoslovia,” she says. “We didn’t want to live under Tito, the communist dictator.”

In 1953, after a couple of years in Jamaica, they moved into the apartment that Odette still inhabits. 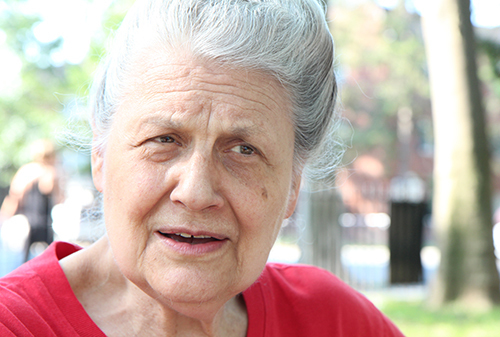 Photo by Nancy A. Ruhling
She stopped taking photos when her mother became ill in 2009.

“I didn’t know any English,” she says. “There were no English classes for children. One of my teachers let me come to school an hour early and taught me. It was sink or swim – I swam. I became the class valedictorian.”

After earning a bachelor’s degree in French from Queens College, Odette began working on her master’s.

“I never finished it,” she says, “because I needed to work.”

She tried a variety of jobs – she once was an Avon lady and a librarian — and filled in the gaps with temp-agency work.

But things didn’t click until her father bought her a camera and she photographed a Norman Norell fashion show. 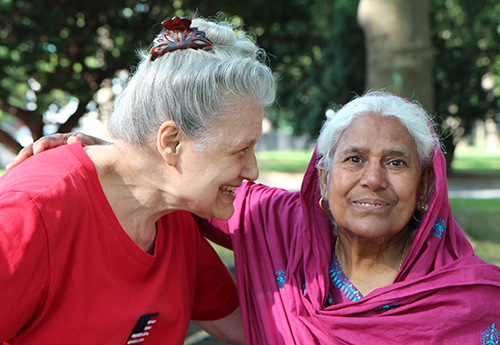 Photo by Nancy A. Ruhling
Odette chatting with a newfound friend in the park.

“My mother worked for him,” Odette says. “I happened to meet a New York Times photographer there. We got to know each other, and he started inviting me to news events.”

Odette followed him for a year and took photo courses, eventually landing a job with Religious News Service.

“I spent my whole career freelancing,” she says. “I thought I would die photographing.” 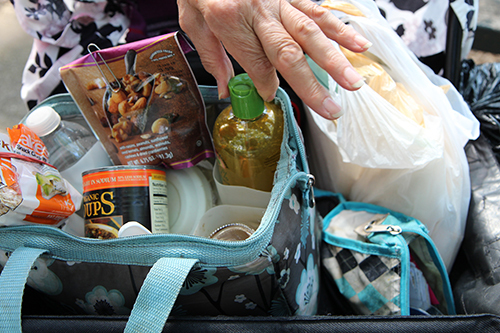 Photo by Nancy A. Ruhling
Lunch includes a can of soup she will eat cold.

Instead, she’s teaching conversational English as a Second Language for 20 hours a week through a program at Queensboro Council for Social Welfare and wheeling the black limousine through the streets of Astoria.

The $11 an hour Odette makes barely covers her bills even though she’s on Social Security and food stamps and lives in a rent-controlled apartment.

She wants to teach ESL full time and is eager to earn a certificate. But the classes are online, and Odette doesn’t have a computer. She took lessons a couple of years ago and figures it will come back to her.

“I don’t have enough money to invest in a laptop,” she says. “I’m waiting for a grant from God Almighty to get me one.” 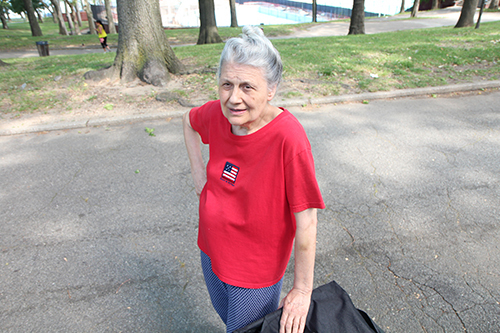 Photo by Nancy A. Ruhling
Odette has a part-time job teaching conversational ESL.

Although she sees the world in human-interest snapshots, she’s not entertaining the idea of taking photos again.

“My eyesight has changed,” she says.

The progressive lenses she needs are too expensive, so she goes without. She claims she can still see enough to get around OK. 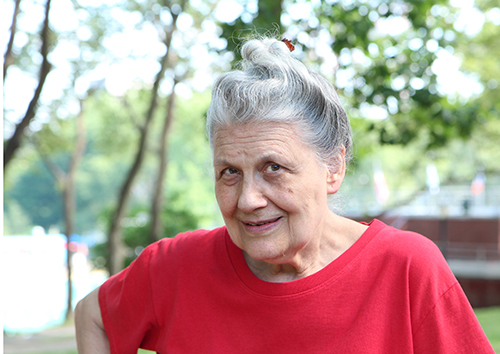 Photo by Nancy A. Ruhling
Odette needs a laptop so she can take online classes to get her ESL certificate.

On her days off, Odette puts her life in order. Her photo archives are intact and filed in her two-bedroom apartment, but other things got out of hand when her mother was ill.

“I’m performing triage,” she says, adding that she wants to sell her three Nikons and her mother’s sewing machine.

She opens the top of her shopping cart. There’s a pile of papers and magazines, a fringed scarf in the unlikely event the hot summer day turns cold, and her lunch – buckwheat cakes, a large banana she started eating for breakfast, a packet of mixed fruit and nuts and a can of lentil soup. 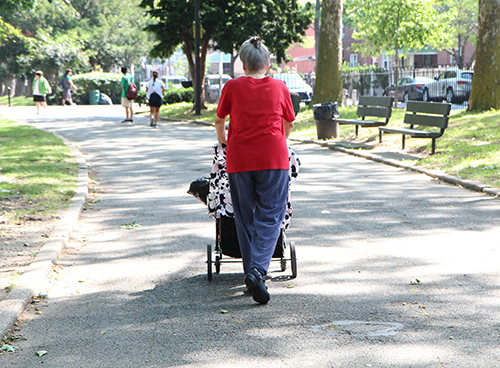 Photo by Nancy A. Ruhling
Odette and the black limo start their day.

“I usually get coffee,” she says.

Today, though, she’s going to take the bus to Flushing. She bought a bag there from a street vendor a while ago and wants to get another one.