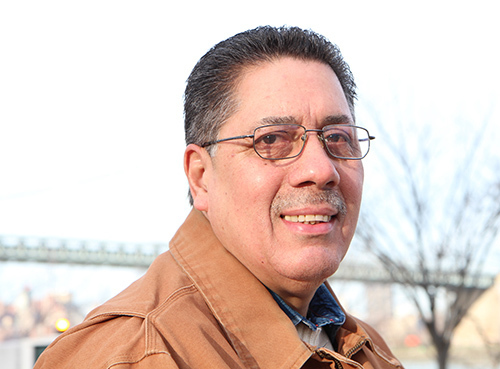 Photo by Nancy A. Ruhling
Danny grew up in Astoria Houses.

It’s along the waterfront next to the children’s playground. Even if you’re a regular park-goer, you might not know of its existence.

The long, narrow rectangular space, encased in a low, white wall, has not had a brightly colored ball roll on its surface in years.

When Danny, a friendly fellow with short-cropped pepper and salt hair, sought it out in June 2016, it was filled with weeds and empty bottles and cans. 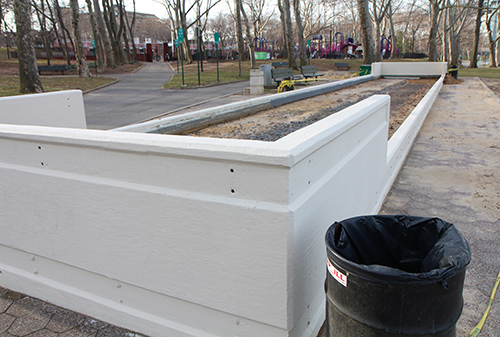 Photo by Nancy A. Ruhling
The bocce court during Danny’s renovation.

As a boy, he had spent a lot of time in the park.

He, his eight brothers and two sisters were raised by a single mother.

She came to Astoria from Puerto Rico in the 1940s and installed her family in a four-bedroom unit in Astoria Houses, a complex that’s a doable walk away for energetic, excited children.

Danny played hard at the park’s summer camp. He learned to swim in the pool and as a teen, he watched over its waters from the lifeguard’s tower. 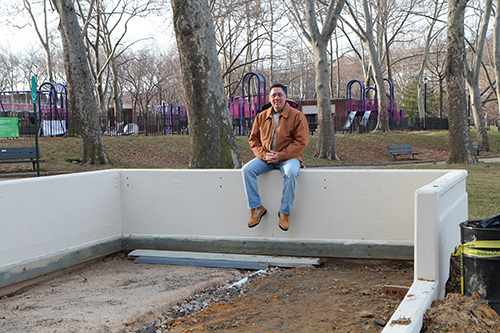 Photo by Nancy A. Ruhling
Danny started the project in the summer.

“Astoria Park was the only green in my concrete city,” he says. “It was my backyard.”

Which is why he thought of it last summer when he happened to visit Francis Lewis Park in Bayside, where he lives.

“I noticed people playing bocce,” he says. “I watched for about an hour. The next day was nice, so I went back. They needed another player and asked me to fill in. I didn’t know anything about the game, but I told them I would give it a try.”

It turns out that Danny’s a natural.

“I did well, and our team won,” he says. “I was so excited that I called my wife from the court.” 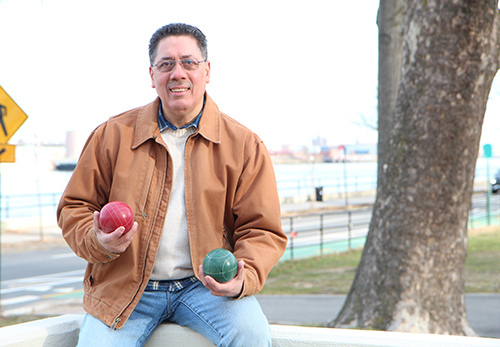 Photoy by Nancy A. Ruhling
He played one game and was hooked.

He started playing every day and thought he’d give Astoria Park’s court a try.

“I remembered my friends’ parents playing there,” he says.

When he saw the court’s state of disrepair, he decided to do something about it.

“The Parks Department told me that nobody was using it and that it might be taken away,” he says. “But they told me I could adopt it. The next day, I started pulling out weeds and raking leaves. Before I knew it, other people started helping me.” 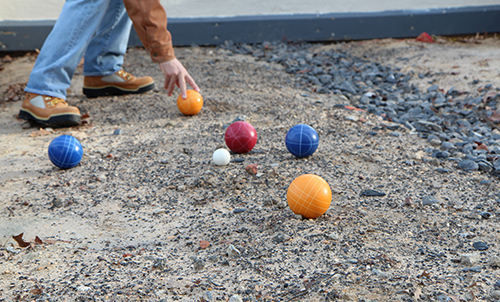 Photo by Nancy A. Ruhling
Bocce is much more than tossing a ball, Danny says.

For 2 ½ months, Danny put aside his own jobs to work on the court.

“I probably spent 200 hours and $200 on it,” he says, adding that the Astoria Park Alliance and Parks Department supplied materials.

Danny, a contractor who specializes in kitchen, bath and basement renovations, has always liked to work with his hands.

Growing up, his family didn’t have much money, so Danny put together a bicycle from discarded parts he found in the neighborhood. 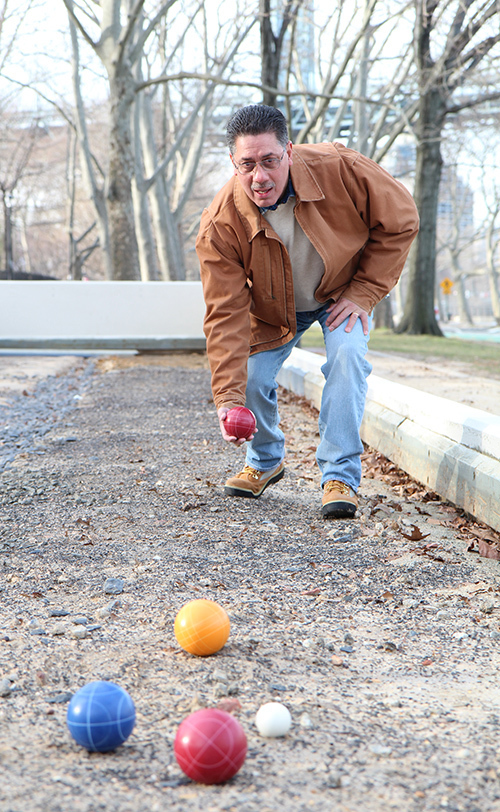 “I found a tire here, a handlebar there,” he says.

When he was 12, he started helping one of his brothers do construction jobs.

“I was like his apprentice,” Danny says. “I learned to paint and plaster and use tools. I loved it.” 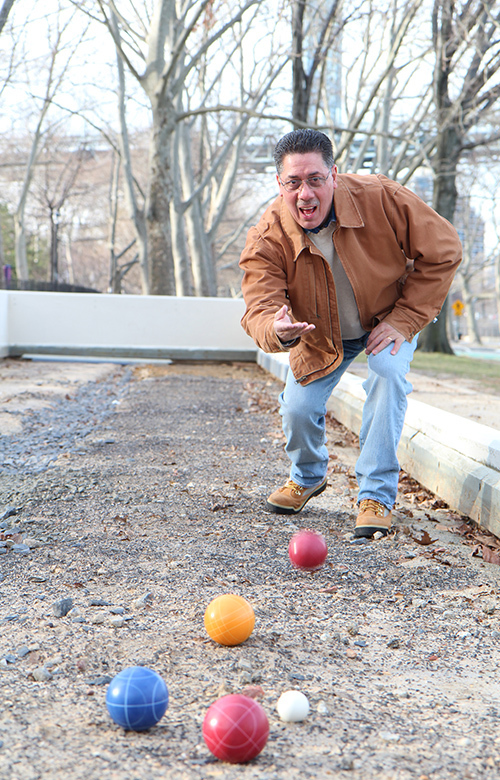 Photo by Nancy A. Ruhling
Letting it roll.

It was in high school that Danny got his first real job: He worked in the stock room at Alexander’s department store.

When he graduated, he followed the tradition of two of his brothers and joined the Marines.

As part of the Second Marine Aircraft Wing, Danny spent his four-year hitch in Cherry Point, North Carolina, and in San Diego and Twentynine Palms, California.

When he returned, he got a job as a doorman at a Fifth Avenue building. 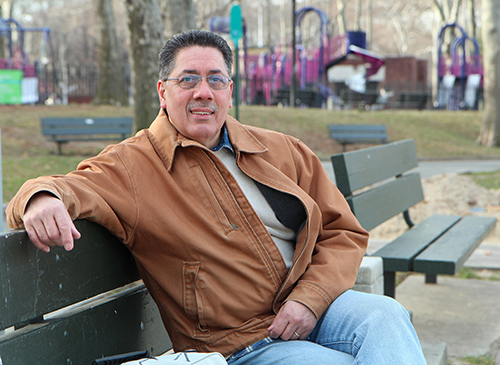 “I met a lot of famous people, including Elton John and Elizabeth Taylor,” he says.

Eventually, he became a building super, first in Manhattan, then in Bayside, where he settled with his wife and three children, who are grown. 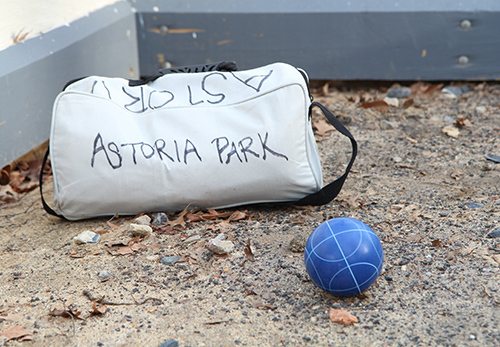 Photo by Nancy A. Ruhling
All set for the next round.

Danny had been counting the days to the grand opening of the court, which was April 22. His game had been on hold during the renovation.

“There’s a lot of strategy in bocce,” he says. “You have to know how to hold the ball in your hand and how to roll it.”

Although Francis Lewis is much closer to Danny’s house, he’s making Astoria Park his court.

“This is where my roots are,” he says. “I couldn’t wait to roll the first ball.”