It was a driver’s license that determined Jaime Jinete’s future.

Jaime, the owner of Nicole’s Cleaners, didn’t know much English when he came to America, but he was fluent when it came to the language of cars. 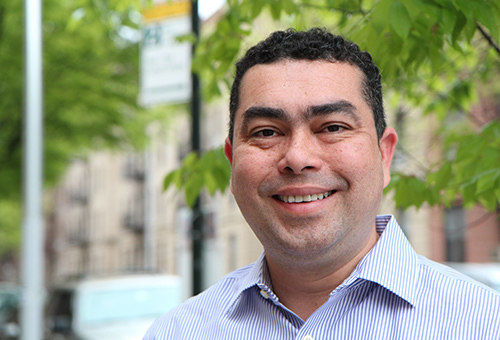 Photo by Nancy A. Ruhling
Jaime named Nicole’s after his daughter.

Before he can elaborate, a man in a suit comes in to drop off six dress shirts.

Jaime and his father, Jairo Blanco, greet him by name and tag the garments.

This gives us time to look around.

The storefront, a walk-in closet sandwiched between a barber shop and a computer emergency room, consists of a front counter just big enough for Jaime and Jairo to stand behind without bumping elbows and four metal racks of clean clothes hanging in plastic bags arranged in alphabetical order.

Nicole’s, which offers dry cleaning, laundry and tailoring services, may be small, but it has a big heart.

An 8X10 piece of paper affixed to the front window tells customers, “IF YOU ARE UNEMPLOYED AND NEED AN OUTFIT CLEAN FOR A INTERVIEW WE WILL CLEAN IT FOR FREE.” 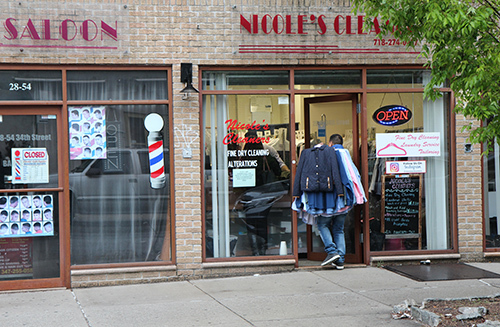 OK, where were we?

We were all the way back in 2000 when Jaime arrived in New York City from the Colombia port city of Barranquilla with little money and large dreams.

“I had visited other cities in America,” he says, “but I would always choose New York over all.”

His two sisters were already here, and Jairo and his wife, Margarita León, joined the family in 2012.

Jaime, a tall man with the round face of a boy, needed a job right away, an idea that he could barely articulate in the confounding mother tongue of his new country.

Somehow, he found out that driver’s licenses were issued expeditiously and sped to get one. He ended up behind the wheel of a dry cleaner’s truck. 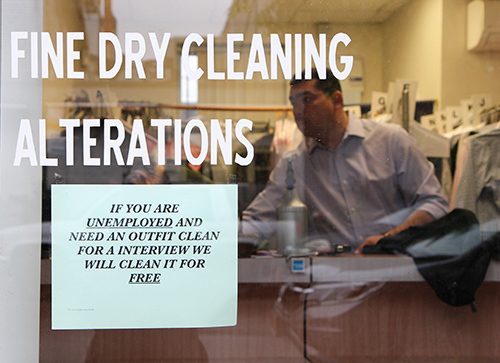 Photo by Nancy A. Ruhling
Jaime’s way of giving back.

This was not what he had had in mind. In Barranquilla, he had earned a business degree from Universidad Autonoma de Caribe. He had taken classes at night and worked at a bank during the day.

But he didn’t mind — he was making American dollars!

Soon, he was working inside the dry cleaning factory then managing a store.

“I learned all about the business that way,” he says.

Five years ago, he opened Nicole’s, which is named for his 9-year-old daughter, and moved it to 34th Street two years later when the building he was in was sold.

The business, which cleans 22,000 to 23,000 garments per year, attracts customers from as far away as the Ditmars area and Woodside. 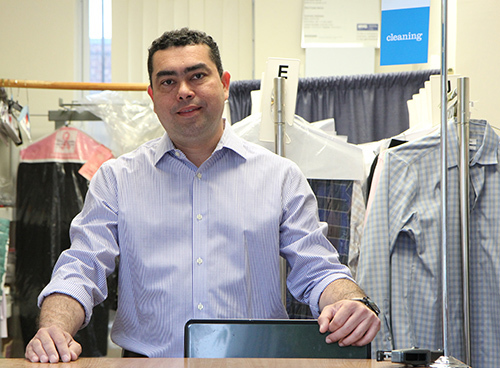 Photo by Nancy A. Ruhling
Jaime is from Colombia.

“I’m not doing anything new or different from any other dry cleaner,” Jaime says. “I’m giving good service and relying upon technology.”

Jaime creates electronic profiles that detail the cleaning preferences of each customer (do you want your shirts folded or put on hangers?), and payments are made via credit card.

“We make it fast,” he says, “so people can drop things off before work and pick up on the way home.” 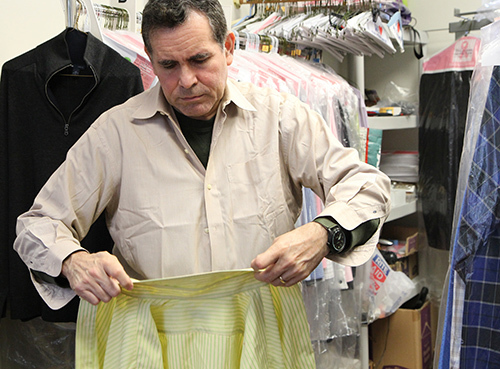 Photo by Nancy A. Ruhling
Jairo inspects a shirt.

A young woman bearing a skinny-strap hot-pink blouse steps in. Jaime says hello; like all his customers, he knows her name. She drops the top and dashes back out into the rain.

There are others, however, who are not in such a hurry.

“Some people come in and talk to me for hours, and I listen,” Jaime says. 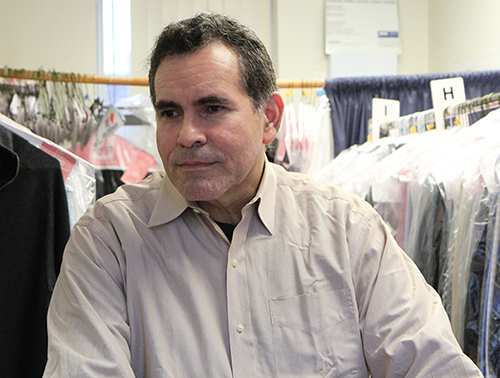 Photo by Nancy A. Ruhling
Jairo helps out on Tuesdays and Saturdays.

“When we opened, my aunt had just been diagnosed with the disease,” Jaime says. “I could have had tags with the shop’s name on them, but when I buy these, 5 percent of the money I pay for them goes to the foundation.”

In the beginning, Jaime worked by himself. 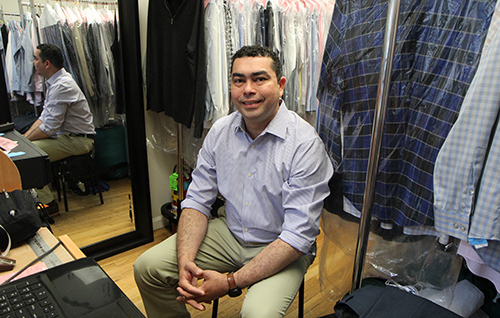 Photo by Nancy A. Ruhling
Jaime greets his customers by name.

Jairo, who commutes from his apartment in Port Washington, helps him out on Tuesdays and Saturdays. A young woman takes over in the afternoons.

He doesn’t mind the 45-minute ride from Long Island.

In Colombia, Jairo ran employee training workshops and seminars and gave speeches before hundreds of people.

He didn’t know anyone was going to take his picture today and has to be persuaded to pose. 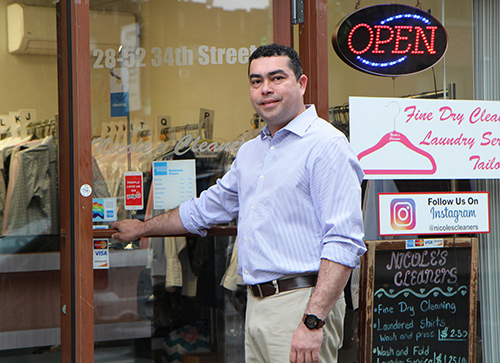 He finally agrees but only after he buttons a pinstriped dress shirt over his dark green sweater.

He thinks he looks more dignified in it.

The extra help is necessary because Jaime’s wife, Adriana Rocio González Vergara, just had a baby, and he wants to be a doting father to Abigail Rose.

Someday, there may be a second shop named for her.

“I don’t want to have a bigger store,” Jaime says. “I would like to branch out and have a bunch of small shops.” 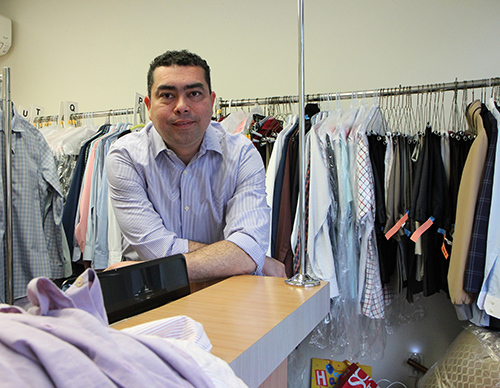 Photo by Nancy A. Ruhling
Jaime in his usual spot.

Jaime’s “free-cleaning” sign has attracted a lot of attention since he put it up in January.

“I always wanted to do it, but it took me a while because in the beginning I couldn’t afford it,” he says. “I put my savings into the business, and I struggled for the first two years. I saw the sign in another store, and I felt it would be nice to be able to help people in the neighborhood I live in.”

His offer is honor-based.

So for, nobody has taken advantage of his generosity.