A biker-black Dodge RAM pickup pulls up outside SL NYC, and motorcycle man Sasha Alexander Lerner steps out onto the sidewalk. 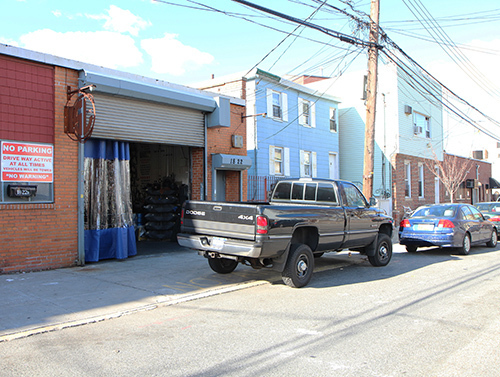 Sasha, a tall and lean man in black, has three bikes at home – two SL customs and a modified Harley FXR – but the early-morning spring breeze was brisk and biting, so he took the truck.

He knows how disappointing this looks so he quickly adds, “It has manual transmission.” 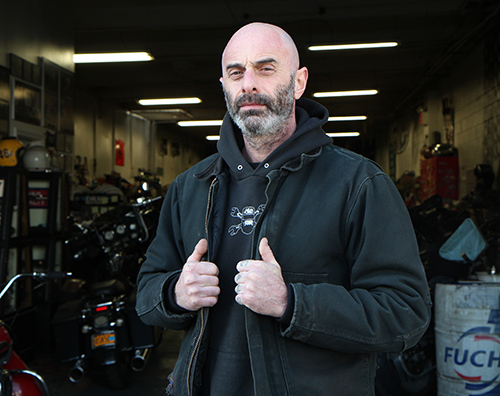 Photo by Nancy A. Ruhling
Sasha is from the Ukraine.

Before I can comment, he raises the shop’s metal gate, revealing a herd of Harleys in various states of repair.

They are angle-parked, side by side, like dominoes. A 3-foot by 5-foot American flag, hung from the sky-high ceiling, floats its stars and stripes over them. (More photos.) 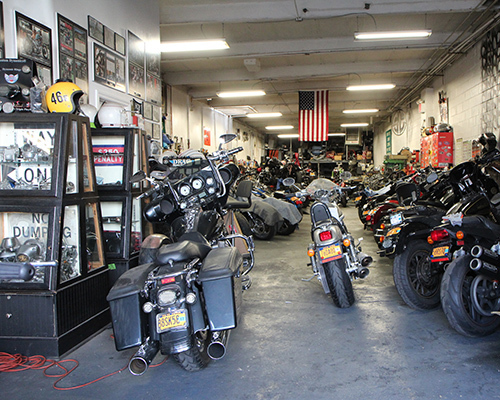 Photo by Nancy A. Ruhling
Motorcycles wait in line for repairs.

In the biker world, Sasha is the go-to guy for building over-the-top dream machines for two-wheel worshippers and mending a miscellany of motorcycle maladies.

“I have my own style, and a lot of people say that I’m an artist,” he says. “But I don’t consider myself one.”

SL, like Sasha, is low key. It announces itself with nothing more than a round, red-rusted metal sign that bears the cryptic insignia SL NYC. 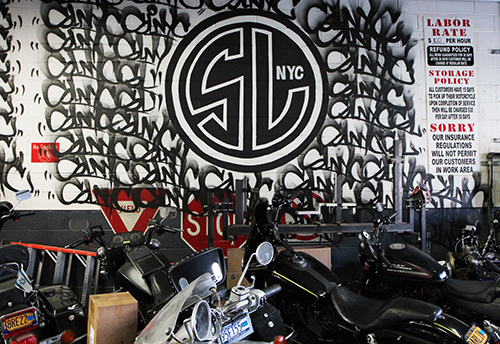 Photo by Nancy A. Ruhling
The SL stands for Sasha Lerner.

But you have to look up to see it.

There’s no reason to do that because the space is in between houses on a patch of 26th Road that’s mostly residential, and more often than not, the gates are down.

Bikers from as far away as Connecticut and New Jersey know that SL stands for Sasha Lerner, and their motorcycles home in on it like Conestoga wagons circling a campfire. 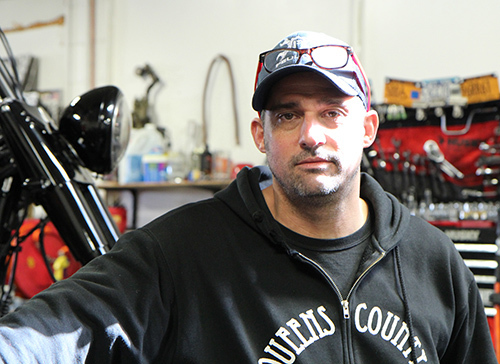 Photo by Nancy A. Ruhling
Rafael is a foot surgeon.

Sasha was born and raised in Charkow, Ukraine’s second largest city, and early in his life, he started riding motorcycles.

“Cars were expensive,” he says. “So I grew up in the sidecar of a Jawa.” 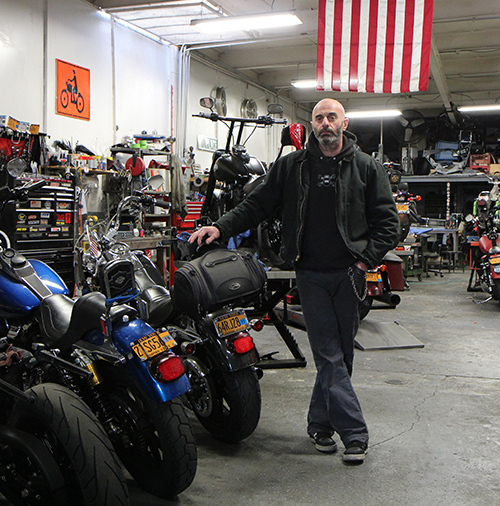 Sasha knew he wanted to come to America, so after he finished his mandatory two years of military service, he immediately flew to New York City, settling in Kew Gardens, the home of his sponsor.

“I didn’t know anybody, and I only had $80 in my pocket,” he says. “The rest of my family never came because they moved to Israel a year later.”

He took a job as a busboy in an ice cream parlor. 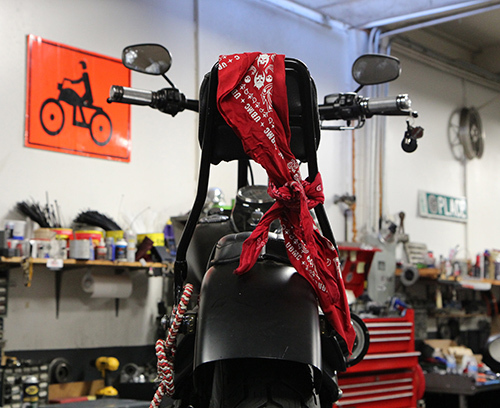 Photo by Nancy A. Ruhling
A Harley in a do-rag.

Motorcycles were not on his mind, but there happened to be a biker bar across the street.

“Every night, people would come out and drink and fight,” he says. “It was like a movie.”

Excited and inspired, Sasha signed on as bike washer at Harley-Davidson. 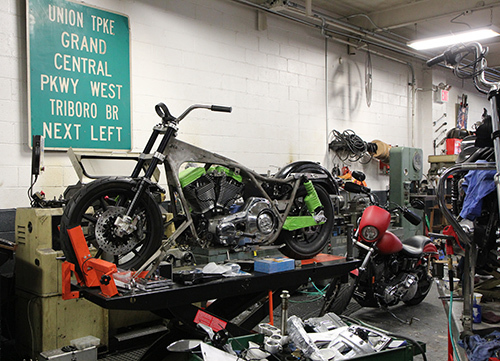 Photo by Nancy A. Ruhling
A Harley being customized.

“They sent me to classes, and I picked up a lot on my own,” he says.

Three years later, he opened his first shop, Queens County Cycles in Woodside. When he sold that business, he returned to Harley-Davidson as a mechanic.

Around the time Sasha immigrated, Rafael Abreu was putting together a 1976 Triumph Bonneville in his parents’ garage in Jamaica Estates. 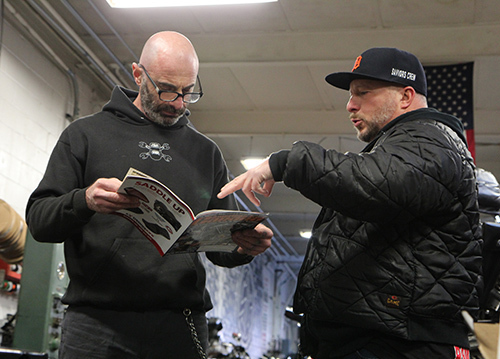 Photo by Nancy A. Ruhling
Sasha confers with a client.

The project, he told himself, was nothing more than a respite from his rigorous studies at the New York College of Podiatric Medicine.

And for a while, that is, indeed, all it was.

Rafael pursued a medical career, setting up his own practice before shifting to a position at a labor union health center. 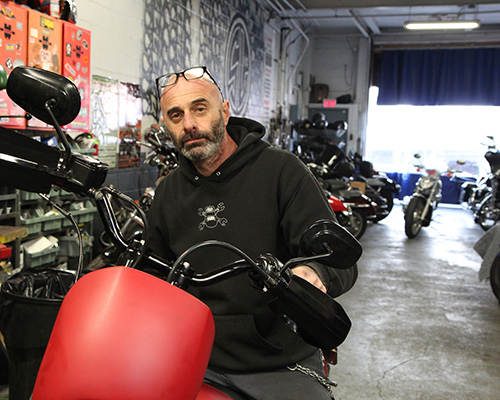 He continued to ride in his free time, and in the early 2000s when Sasha was working for Harley-Davidson, they struck up a friendship.

In 2011, when Sasha decided to open SL, Rafael came along for the ride. 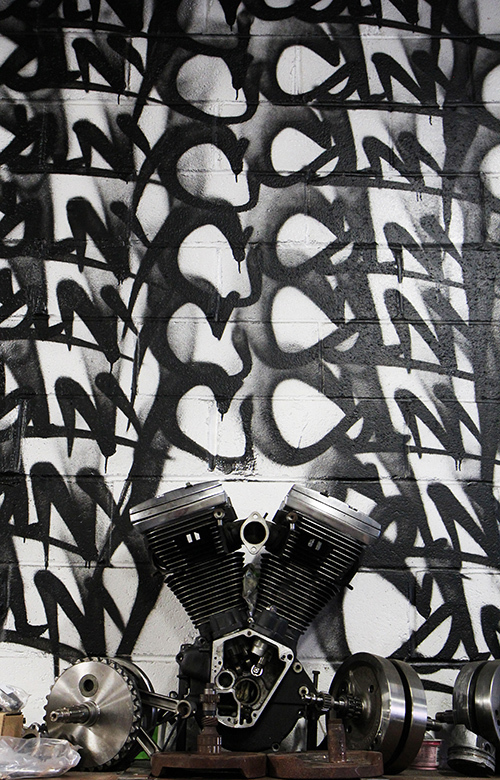 Photo by Nancy A. Ruhling
A Harley engine on display in the shop.

They pooled their resources and set up a machine shop complete with high-tech, robot-like computer numeric control tools.

“I’ve always had white-collar jobs,” says Rafael, who is mild mannered and soft spoken, “but I’m a blue-collar guy who likes to get his hands dirty.”

Smiling, he holds them out in front of him: They are scarred and grease-streaked. 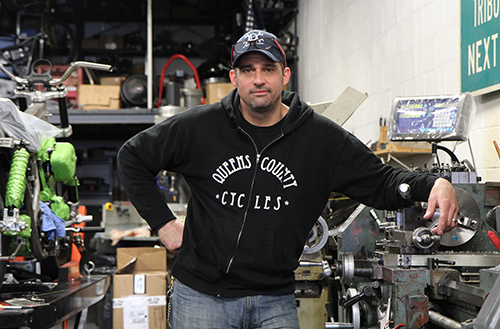 Photo by Nancy A. Ruhling
Rafael loves surgery and working on motorcycles.

Sasha and Rafael pretty much man SL NYC by themselves.

Rafael, who is on the surgical staff of New York Presbyterian/Queens and Gramercy Surgical Center and whose bike of choice is a 1988 Harley-Davidson FLPH, joins Sasha after his early-morning operations.

“I love doing surgery, and I love working on motorcycles,” he says. “I’ve learned a lot from Sasha.” 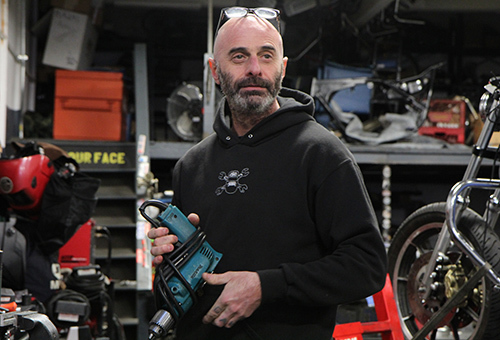 Photo by Nancy A. Ruhling
Sasha’s a proud U.S. citizen.

Motorcycle maintenance is a seasonal business; things spike in the spring and summer when riders hit the road.

“It’s been an intense six years,” Rafael says. “We started with zero, and now we’re jam-packed.”

But it is still far from an easy ride. 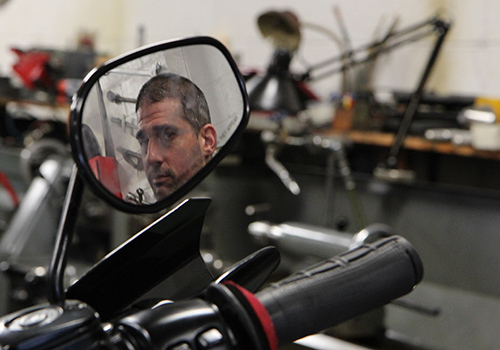 Photo by Nancy A. Ruhling
Rafael checks out his reflection.

“Sometimes I make money, and sometimes I don’t,” says Sasha.

He accepts the fluctuating state of his finances. It is his independence that he values.